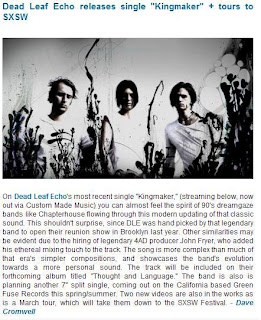 On Dead Leaf Echo's most recent single release "Kingmaker," (now out via Custom Made Music) you can almost feel the spirit of 90's dreamgaze bands like Chapterhouse flowing through this modern updating of that classic sound. This shouldn't surprise as DLE was hand picked by that seminal band to open their much anticipated reunion show in Brooklyn last year. Other similarities may be evident due to the hiring of legendary 4AD producer John Fryer to add his golden mixing touch to the track. The song is more complex than much of that era's simpler compositions however, demonstrating the essential difference between unimaginative copying and true musical evolution. Dead Leaf Echo have now positioned themselves at the forefront of this creative updating. Guitars chime and shimmer while vocals smoothly wash all over you. The track will be included on their forthcoming album titled "Thought and Language." The band is also is planning another 7" split single, coming out on the California based Green Fuse Records this spring/summer. Two new videos are also in the works as is a March tour. Those live dates commence on the 7th in Baltimore, working their way through the south up to and including some noteworthy shows in Texas, not the least being multiple dates at the SXSW Festival.

Posting at The Deli Mag

nice short feature. remember them from your previous entries.
and good to hear they have such a success.

Yeah, I've written about them before. They are definitely a band I will always make time for.

I'm also am totally psyched to see them perform a number of times at SXSW very soon!

Yeah, I really like their latest track there, Ivanka. It definitely shows their continuing musical evolution.

Also - be sure to check out the two videos I've included here as well.

Dave, Thanks for your blog on Dead Leaf Echo. You make discovering new music a great experience. I like the way you format the blog with text, photos, audio & video - it leaves one with a good sense of who Dead Leaf Echo are. I love their sound & am glad I read your blog.

Thanks for sayin, Charlie.

Yeah I often think that many of the blogs I visit are too cluttered. There is just way too much "noise" and "distractions" going on.

I too prefer a clean, linear experience.

Happy to hear you like Dead Leaf Echo too!

When does SXSW start?

Yeah, their music vids add another sweet dimension to that classic dreamgaze sound.

Nice to see this band getting their just due!

This band definitely has some original visuals- their videos, clearly made of some 'lost & found tapes' have a very classy, vintage feel to them and work well with the music. There's thought put into it and the outcome is very interesting.