It’s always great to see true indie acts getting a shot at performing on a bigger stage from time to time. More than a few will get that opportunity at the Gasparilla Music Fest, which takes place March 7-8 in Tampa, Florida at Curtis Hixon Waterfront Park and Kiley Garden. 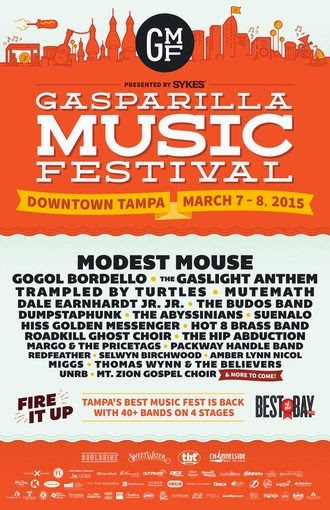 Among some of the bigger name acts like Modest Mouse, The Gaslight Anthem and Mutemath, indie road veterans Dale Earnhardt Jr. Jr. will be afforded the opportunity to showcase their sound in a location other than the usual haunts they seemingly are always at (at least here in New York). Just namecheck every currently popular venue in Williamsburg, Brooklyn and/or the lower east side of Manhattan. In other words – all the places I usually find myself at. 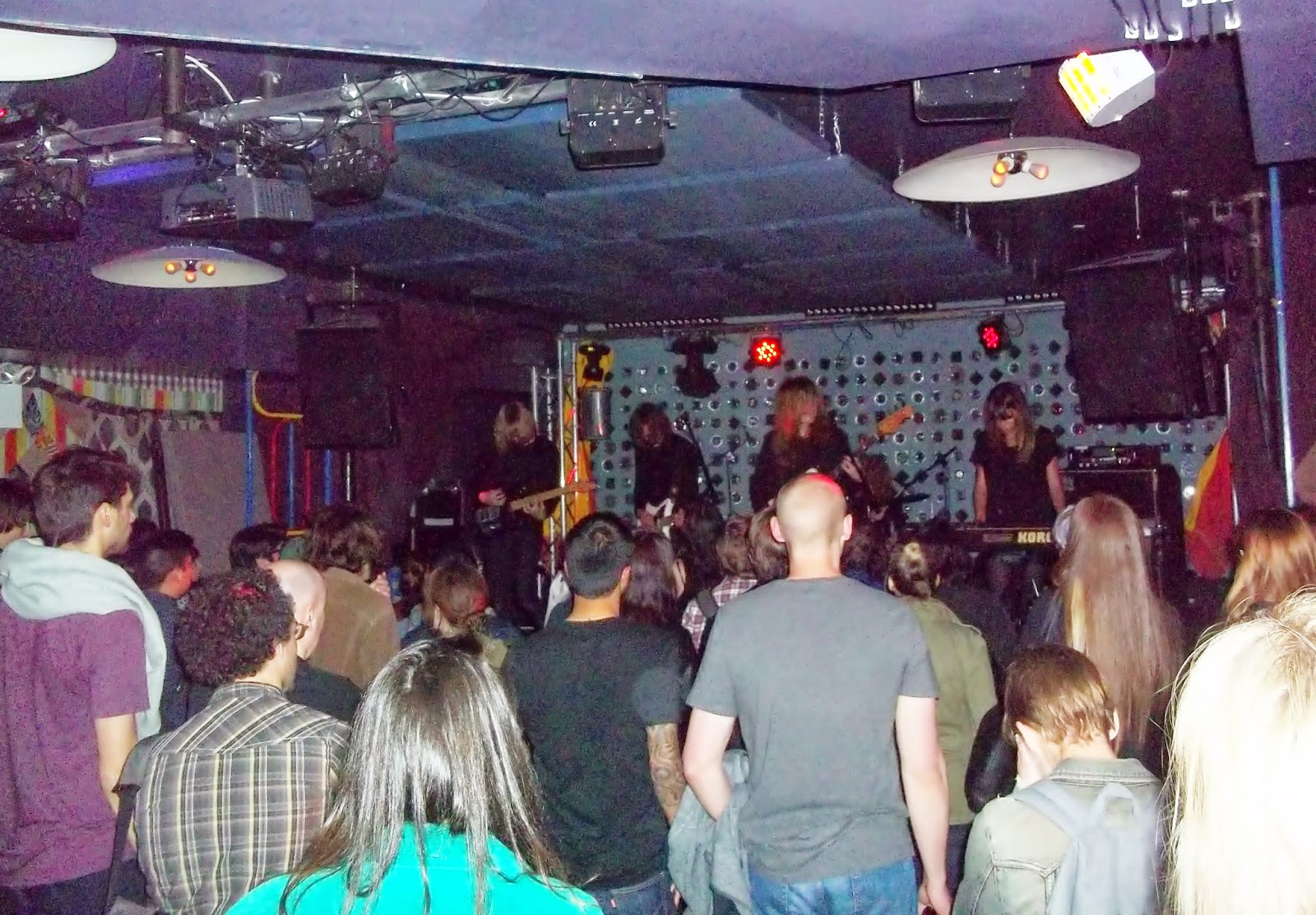 Headliner Modest Mouse will release their new studio album, Strangers to Ourselves, via Epic Records on March 3 just prior to their appearance at GMF making this their first studio album since 2007’s We Were Dead Before the Ship Even Sank. Modest Mouse gained mainstream attention when their 2004 single, ‘Float On’ became the band’s first #1 song on Billboard’s Modern Rock Chart and was nominated for a 2005 Grammy Award for Best Rock Song.


The festival is an actual Florida 501(c)-3 non-profit corporation whose mission is to nurture and promote the cultural life of the Tampa Bay Area by presenting a spectacular range of inspiring musicians and performers across all genres that leads to music awareness, education and the continuance of the urban renewal of Tampa. It was founded in 2011 with financial support from several Tampa Bay area based businesses and the organization’s founding members, The Ring of Fire. 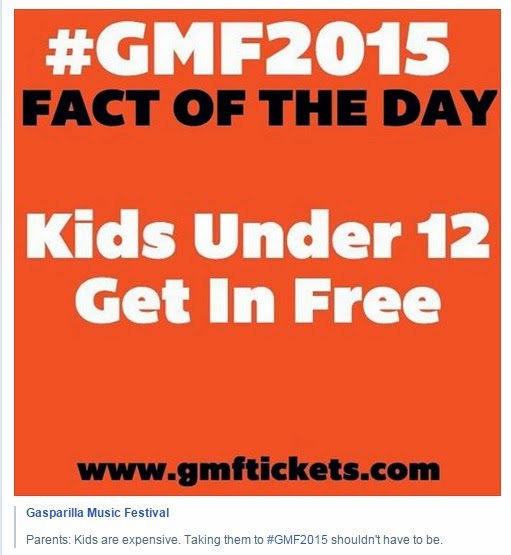 New Orleans favorite Mutemath, whose sound fuses elements from psychedelia to traditional gospel to modern electronica yet still firmly rooted in New Orleans rhythm and blues, will also be releasing a new recording later this year. While Jamaican roots reggae trio, The Abyssinians, are famous for their close harmonies and promotion of the Rastafari movement within their lyrics. Formed in 1968, the band has gone through a number of lineup changes with the current trio touring since 1997 including dates at Reggae on the River, Sierra Nevada World Music Festival and The Bob Marley Day Festival in 1998. The group was also nominated for a 1999 Tamika Award. 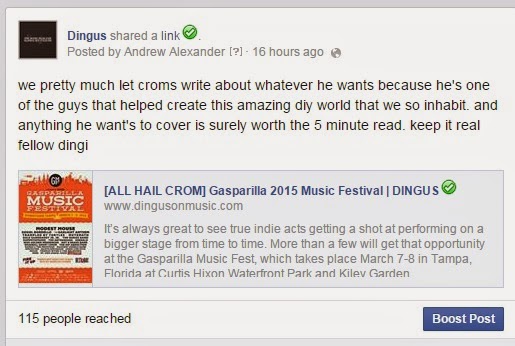 It is an interesting genre of music where vocals are employed and yet the actual lyrics are completely unintelligible. The two most popular that immediately come to mind are black metal (where vocals are screamed) and the dreampop/shoegaze first popularized by The Cocteau Twins. 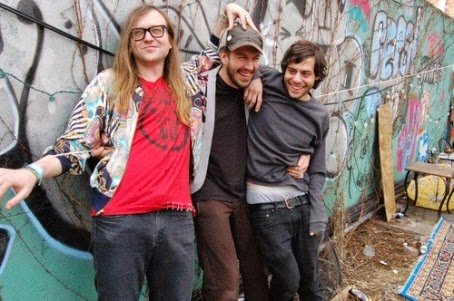 Brooklyn’s preposterously named Baby Birds Don’t Drink Milk are firmly embedded in the latter category. Their sound however is a truly beautiful one. “Saturday” moves with the minor key melancholia and descending progression of prime mid-90’s dreamgaze practitioners like Slowdive.

Additional tracks like “Burt” pops and crackles with the feel of a late night jam session. The melody is strong, but any semblance of literal meaning is merely suggested. The musical equivalent of an impressionists water color painting. A surprisingly soulful element emerges however, with the romanticism of early 1970’s R and B act The Chi-Lites discovered under a layer of Kevin Shields’ My Bloody Valentine filters. The band is currently in the studio recording new material. 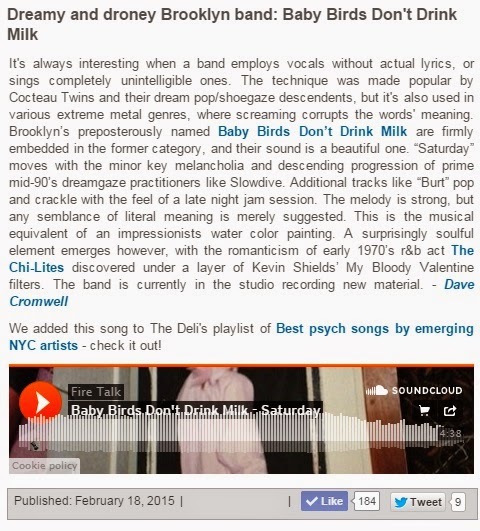 BBDDM on The Deli Mag by Dave Cromwell

Reuniting this past summer after a four year break to work on other projects, Brooklyn’s The Jaguar Club prepare to release their latest EP “Close” on March 3rd. Having recently hosted a weekly Wednesday night residency at Pianos, the band continues to expand on its signature sound. 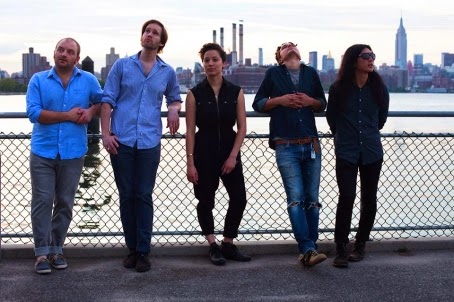 
“Sleepwalking” builds around a dominant bass guitar progression, with loose jammy guitar and reverberated percussion. The overall feel leans closer to early Cure tracks like “10:15 Saturday Night.” Other tracks like “The Sirens” benefit from some inspired, aggressively soulful guitar work near the end of that song. 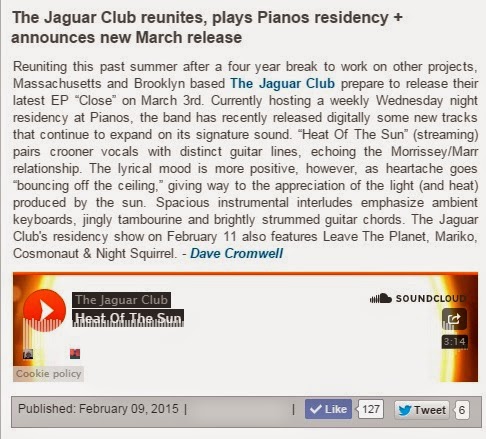 The Jaguar Club on The Deli Mag by Dave Cromwell

Brooklyn based folk-pop artist Leslie Paris Viking showcases an ironic wit via a series of recently released tracks. With a vocal tone reminiscent of late 70’s/early 80’s troubadour Steve Forbert, the folk genre may be “alive on arrival” once more. 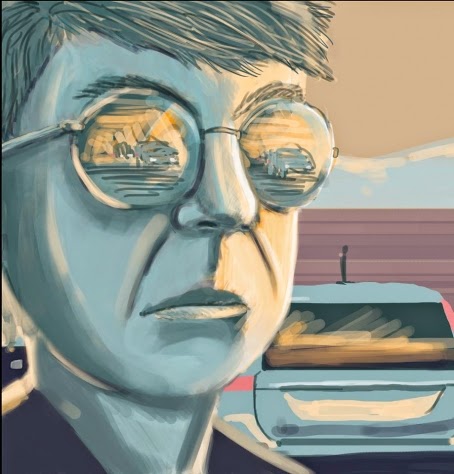 “This Machine” presents the sort of thoughtful wordplay any poetry fan can appreciate. Couplets describing the title subject as “A positive action machine” with “no regretting from now on” and being “hellbent on heaven and whatever else you do for fun,” point to the author using metaphor in describing his own feelings. Alternately, “The Greatest Singer In The World” morphs from over-the-top braggadocio to self-doubt. “No one approaches me” eventually becomes “that’s lonely.” Of “all the people on this train, I can’t be the only one who’s unsure of the bargain.” It’s basic two chord guitar progression with understated keyboard, guitar and drums accompaniment present what Forbert fronting The Velvet Underground might have sounded like. 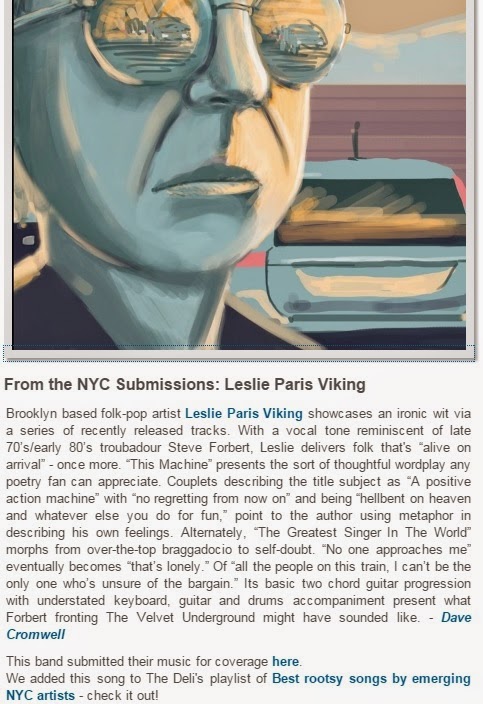 Leslie Paris Viking on The Deli Mag by Dave Cromwell