Recent Deli Mag Features: Catching Up with The Pierces/White Hills/Amen Dunes and More


Nearing the end of February, presented here are the most noteworthy recent features I've had published in The Deli Magazine.  The soundquality and performances these musician deliver make for essential listening.

First up - The Pierces 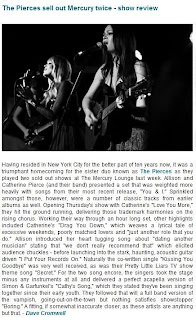 Having resided in New York City for the better part of ten years now, it was a triumphant homecoming for the sister duo known as The Pierces as they played two sold out shows at The Mercury Lounge last week. Allison and Catherine Pierce (and their band) presented a set that was weighted more heavily with songs from their most recent release, "You & I." Sprinkled amongst those, however, were a number of classic tracks from earlier albums as well. Opening Thursday's show with Catherine's "Love You More," they hit the ground running, delivering those trademark harmonies on the rising chorus. Working their way through an hour long set, other highlights included Catherine's "Drag You Down," which weaves a lyrical tale of excessive weekends, poorly matched lovers and "just another role that you do." Allison introduced her heart tugging song about "dating another musician" stating that "we don't really recommend that" which elicited audience chuckles - before launching into the stark, haunting, acoustic guitar driven "I Put Your Records On." Naturally the co-written single "Kissing You Goodbye" was very well received, as was their Pretty Little Liars TV show theme song "Secret." For the two song encore, the singers took the stage minus any instruments at all and delivered a perfect acapella version of Simon & Garfunkel's "Cathy's Song," which they stated they've been singing together since their early youth. They followed that will a full band version of the vampish, going-out-on-the-town but nothing satisfies showstopper "Boring." A fitting, if somewhat inaccurate closer, as these artists are anything but that. 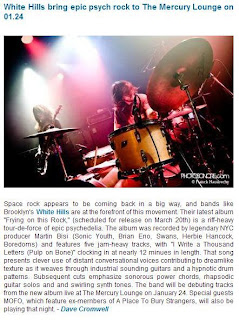 Space rock appears to be coming back in a big way, and bands like Brooklyn's White Hills are at the forefront of this movement. Their latest album "Frying on this Rock," (scheduled for release on March 20th) is a riff-heavy tour-de-force of epic psychedelia. The album was recorded by legendary NYC producer Martin Bisi (Sonic Youth, Brian Eno, Swans, Herbie Hancock, Boredoms) and features five jam-heavy tracks, with "I Write a Thousand Letters (Pulp on Bone)" clocking in at nearly 12 minues in length. That song presents clever use of distant conversational voices contributing to dreamlike texture as it weaves through industrial sounding guitars and a hypnotic drum patterns. Subsequent cuts emphasize sonorous power chords, rhapsodic guitar solos and and swirling synth tones. The band will be debuting tracks from the new album live at The Mercury Lounge on January 24. Special guests MOFO, which feature ex-members of A Place To Bury Strangers, will also be playing that night 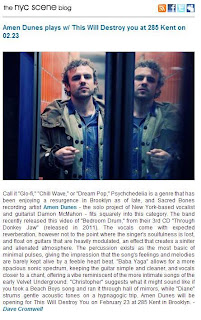 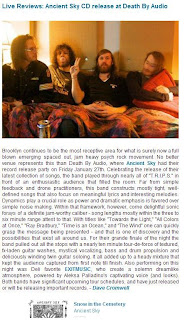 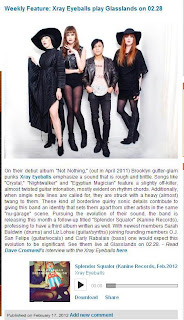 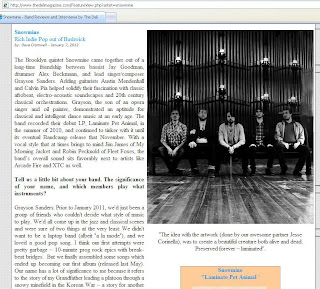 
Lots of great music to listen to and plenty of Crom-words to read at the links listed under each band.