The Vandelles - Live at The Mercury Lounge

It's a very active music scene is New York these days. Going to see one band frequently leads you to the music of another. Most nights out feature at least 3 bands on any one showcase. As a result of this, I have been fortunate to discover new and emerging artists though their friendships and professional relationships with musicians I was already a fan of. Such is the case with The Vandelles. 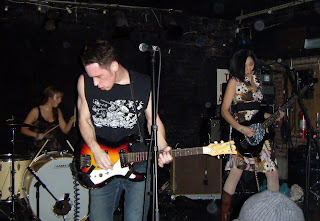 As it turns out, I was already familiar with The Vandelles frontman and primary force - guitarist and lead vocalist Jason Schwartz (or Jasno Suarez as he is sometimes amusingly known as). Jason and I were somewhat friendly way back in the early part of this decade - when we used to attend Ravonettes shows together around the New York area - and converse a bit via message forums relating to that band. Then we sort of lost touch (as these things frequently happen). It's nobody's fault, but just the result of our busy lives as we attempt to move forward and make progress while attempting to figure this whole thing out. 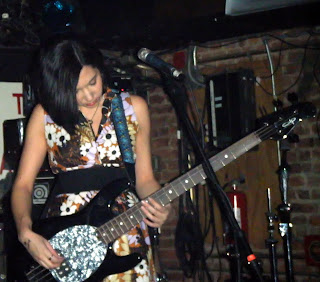 Jump ahead to the CMJ fest of October 2009. I have been very much into that little ol' band from Texas (no, not ZZ Top) but Ringo Deathstarr for a while now. They are playing shows in New York and I plan on attending, if not all, then certainly most of them. Their first show in New York that week was at Fontana's on the Lower East Side. DJing that night's festivities is the Vandelles other guitarist Christo Buffam. It turns out the Vandelles and Ringo Deathstarr have a mutual professional relationship and friendship. I meet various members of RD and Christo as well. I tell him that I "used to know Jason" and make a point to get in touch. Three days later I catch The Vandelles for the first time at an "anti CMJ" party being held at the Brooklyn venue Lake Johnson. Jason and I reconnect and I'm duly impressed with the quality of The Vandelles music as well as their visual presentation. By "visual presention" of course I mean there are also two cute girls in the band. 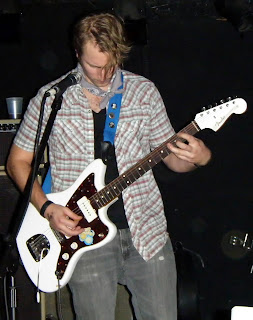 Sonic annihilator Christo Buffam
I would not be able to attend another Vandelles show until January 22, 2010 at The Mercury Lounge. In between the two live shows I was fortunate to be sent an advance mp3 audio copy of their soon to be released full length album. Listening to what Jason and his musical associates have created has been a thoroughly rewarding experience. The sound quality and overall direction is some of the best stuff I've heard in years. It contains so many of the elements of music that I truly love, and I'd be shocked that upon release, this album didn't catapult The Vandelles to the same level as say as band like A Place To Bury Strangers currently resides on. 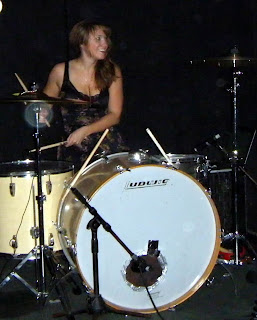 So, what about their live show at the Mercury Lounge?

The band opened with the almost poppy “Get Down”. Here in the live environment it’s the opposite of most bands. That is, the vocals are much clearer than what is on the recorded output. Well, at least what I have heard. I’ve been told that some of the advance tracks sent to media types contain “demo” vocals. That perhaps the vocals will be clearer once the final product has been released? I’m not so sure it matters to me, really as I’ve always been a big fan of the “buried” vocal. Whether it be My Bloody Valentine and The Cocteau Twins in the early 90’s or a current band like The Depreciation Guild. However that develops for The Vandelles ulimate recorded release, this live version of “Get Down” is a bass heavy fuzz-fest with frontman Jason telling a tale conversational style on the verses, with bassist Lisha “the Viper” providing essential background harmonies on the bridge.

Check out that performance here: 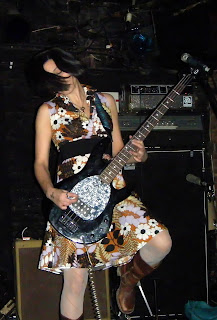 With the crowd fully pumped from the outset, the band then launched into “Fever of the Beat.” The songs angular, choppy rhythm with aggressive drumming from Honey Sue then gives way to a smooth verse section. Jason delivers the vocals just to get it to the great bass riff – and then back to bashing drums with -Christo’s sinuey guitar-line running underneath it all. Clocking in at a mere 2 minutes in length, there isn’t a wasted moment, as the band gets in and back out again, with a loose precision.

Check it out here: 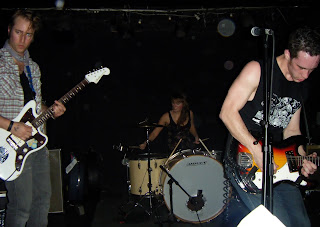 Next up was the band's first ever live performance of the song "Going Downtown," and they pulled it off with confidence. The song itself drives off a heavy riff with syncopated percussion that is soon followed by buzzsaw guitar chords. A verse is sung then a sonic squall of noise shatters the air - and then back into that downbeat riff. The Vandelles two pretty females comprising the rhythm section are a powerful force of smash and rumble. Jason and Christo play hellacious noise guitar over top and somehow it all fits perfectly together.

Have a listen here: 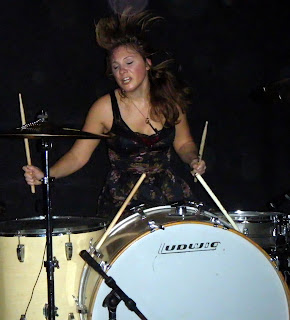 After an equally compelling version of "Bomb The Surf," the band launched into one of my person faves in "California Killer." A song all about the good times of "crusing down the highway" and "trying to find another way to get my kicks," the lovely rhythm section rumbles like a 57 Chevy as Jason slings his guitar behind his back to deliver the lyrics. However, it's hardly a "guitar-less" moment as Christo is squalling some of the rudest noise out of his amp that anyone should be rightfully allowed to do so. Once they get to the catchy change, Jasno is back on board, delivering the twang as he paints a picture of tanned bodies on California beaches. A long central instrumental section allows the listener to make up their own "beach fantasy". Since "killer" is in the title, I like to imagine a cheesy west coast slasher flick, or perhaps a 60's beach movie with a rubber fish-monster attacking girls in bikini's. Sweet.

Well, have a listen for yourself: 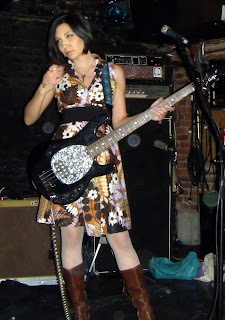 "Dash N' Dive" was then played, followed by the twang-heavy "Lovely Weather." Breathy tandem vocals from Jase and Lisha only serve to set up the pure sonic-assault that follows. It goes from twangy stomp to a buzz saw shredding from Christo and Jason - while Lisha and Sue lay down the never-veered-from anchored groove to it all. 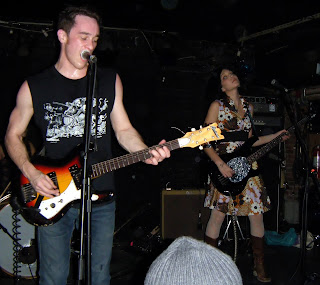 The band then ripped through "Swell To Heaven" and followed that with the tender
50's-style love ballad "Chain Walking." The packed Mercury Lounge crowd was loving every moment of the show as they moved in tighter and surged closer to the stage. It was now time for the sonically detective noir themed "Bad Volcano" which the band delivered a knockout version. Guitarist Christo is prominently featured as he lays out the surf-riff underpinings to Jason's vocal. Honey Sue and Viper Lisha throttled the bash and pop with teetering-on-the-edge wreckless abandon. It all lead to a glorious reverberated middle-to-endout guitar orgy. 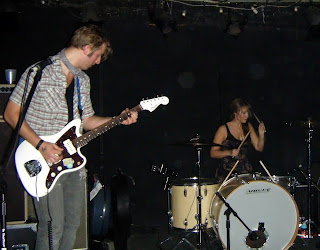 One more song was played - a cover of Spacemen 3's "Losing Touch With My Mind" and then they were done.

Pre and post-show I was able to corner three-quarters of the band for an amusing and informative interview. You can view that here: 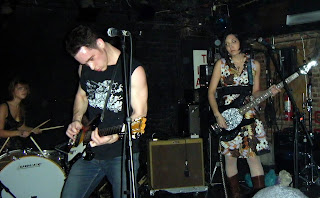 Having recently released a 5 song EP in the UK on SVC Records, the band now prepares for their full-length debut on these shores.

Go out and get these records if you can, and be sure to catch them live at one of their upcoming shows.

It was just this past Friday - January 15, 2010 (oops, almost wrote 2009) that I ram-jammed on down to The Bowery Electric in New York City to see one of my new favorite singers - Julia Haltigan perform.

Julia is an amazing singer/songwriter who looks as good as she sounds. 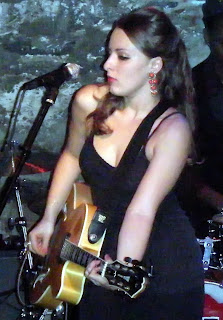 She writes brilliant lyrics - fantastic melodies - and can chunka-chunka on the guitar with the best of 'em. 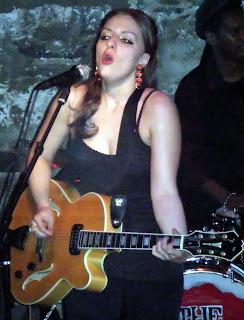 Her lips are like sugar - sugar kisses. But I digress. What about the music, you ask? 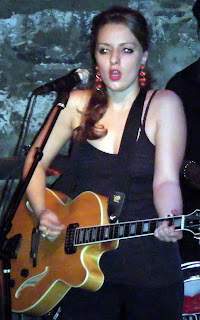 Oh, the music rocks and it rolls. It's a bit blues, a bit country and a whole lotta original and fantastic. 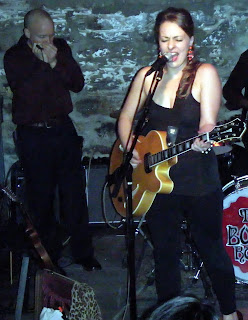 She's got this kickass sideman who plays a blues harp like Memphis Minnie in Led Zepplin. Yeah, that bluesy, that good. 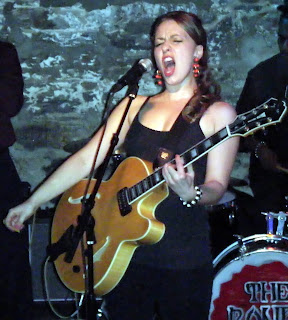 Julia has a powerful voice that can wail and hit those high notes. 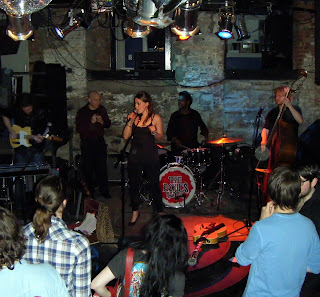 But what she really does for me - is break my heart a little bit - each time I hear her. Each time I "relate" to her lyrics. Each time I'm brought back to those memories - that are too painful for me to talk about (no! Don't ask me. I won't tell you!) 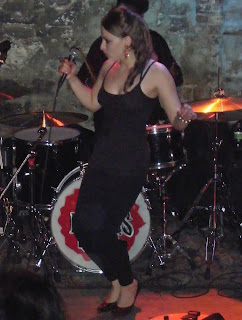 The way I deal with it - is to live through songs. Other people's songs. Good songs. Songs that speak to me (in that dark and scary place that I won't allow anyone near. No, not even you).

So - join me won't you? Join me in a celebration of Julia Haltigan's music.

And some other links:
http://www.juliahaltigan.com/