Looking to make a strong entry into the always formidable US heavy rock scene, UK based power trio RavenEye release their debut EP, “Breaking Out” on April 28th via Rook Recordings.

Brown has been referred to as “one of the best and brightest guitar heroes performing in the world today.” His work as a solo artist prior to RavenEye also earned him supporting gigs alongside such artists as Jeff Beck, Buddy Guy, Johnny Winter and Joe Satriani, but being part of a band was what Brown craved. 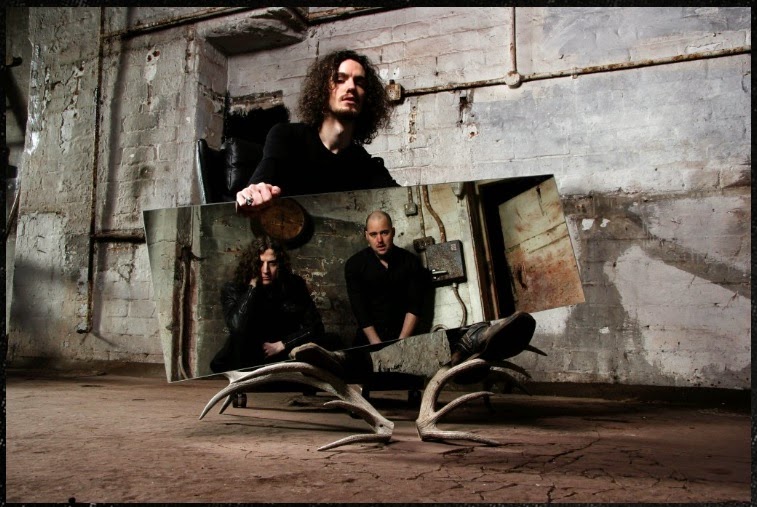 “I’ve been looking to find the right people to get together with for so long; it’s something we’ve all had a craving for individually,” says Brown, “I’m finally performing with two killer musicians, who are wicked on stage and are also close friends, it’s amazing how music can make people connect so differently.”

Their first single and title track, “Breaking Out,” immediately define RavenEye’s musical foundation. The song is about “breaking out” of personal conformities. The lyric, “I am the soldier of my war inside” represents the constant battle between what you feel you should do and what you really want to do. Sometimes it’s so easy to obscure your own visions because of other people’s formalities.

Col. Bruce Hampton and the Aquarium Rescue Unit reunite for a series of live shows this summer. 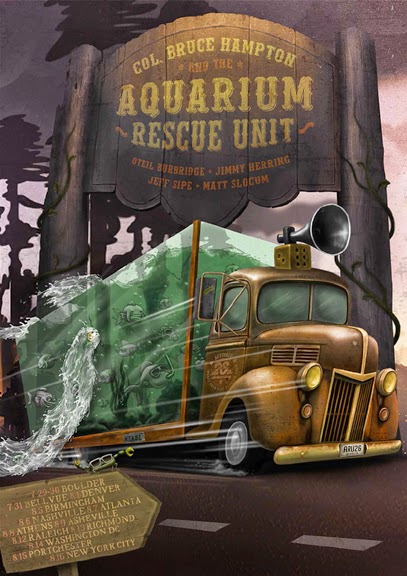 The influential jamband pioneers return with a classic lineup that originated in the late 1980’s before becoming a true force in the early 1990’s. Although splitting up to move on to other projects after 1993, the band periodically performed reunion shows over the last decade. Playing a mad frenetic style of improvisational fusion that encompasses amped up jazz, progressive rock and bluegrass country, this hybrid flourishes through a blazingly high level of skill and creativity. A sound and style that carries on the same spirit Jack Kerouac wrote about in the generational watershed classic “On The Road,” while describing his experiences at Charlie Parker shows.

Hampton’s freethinking point of view provides a central focus, allowing his fellow musicians Jimmy Herring (guitar), Oteil Burbridge (bass) and Jeff Sipe (drums) the freedom to expand their own sonic vision. If those names sound familiar, its because they’ve all gone on to establish themselves in other prominent acts. Herring (guitar) with Widespread Panic, The Dead, Jazz is Dead, the Ringers, and his own solo project. Burbridge (bass) with his band the Peacemakers and with the Allman Brothers and the Tedeschi Trucks Band; and Sipe with his own trio and collaborations with Phil Lesh, Béla Fleck, Susan Tedeschi, Trey Anastasio, Jazz is Dead and a host of others. For this tour they will also be joined by keyboardist Matt Slocum, who performed with them at their 2011 Georgia Theatre show.

The tour kicks off with a two-night run at the Fox Theatre in Boulder, CO on July 29 and 30. After a few more stops in Colorado, the band will head through the Southeast at the beginning of August before heading to the Northeast, where they will wrap up the reunion outing with a show at the Brooklyn Bowl in New York City on August 16. Tickets for all of the dates are now on sale and can be gotten here.

Life-long purveyors of the true independent DIY culture, Squirrel Records stand as a defiant standard bearer for making music on their own terms. Already familiar with a number of prior releases from this Leeds, UK based label, the arrival of more uniquely packaged vinyl in the mail from them was met with eager anticipation. 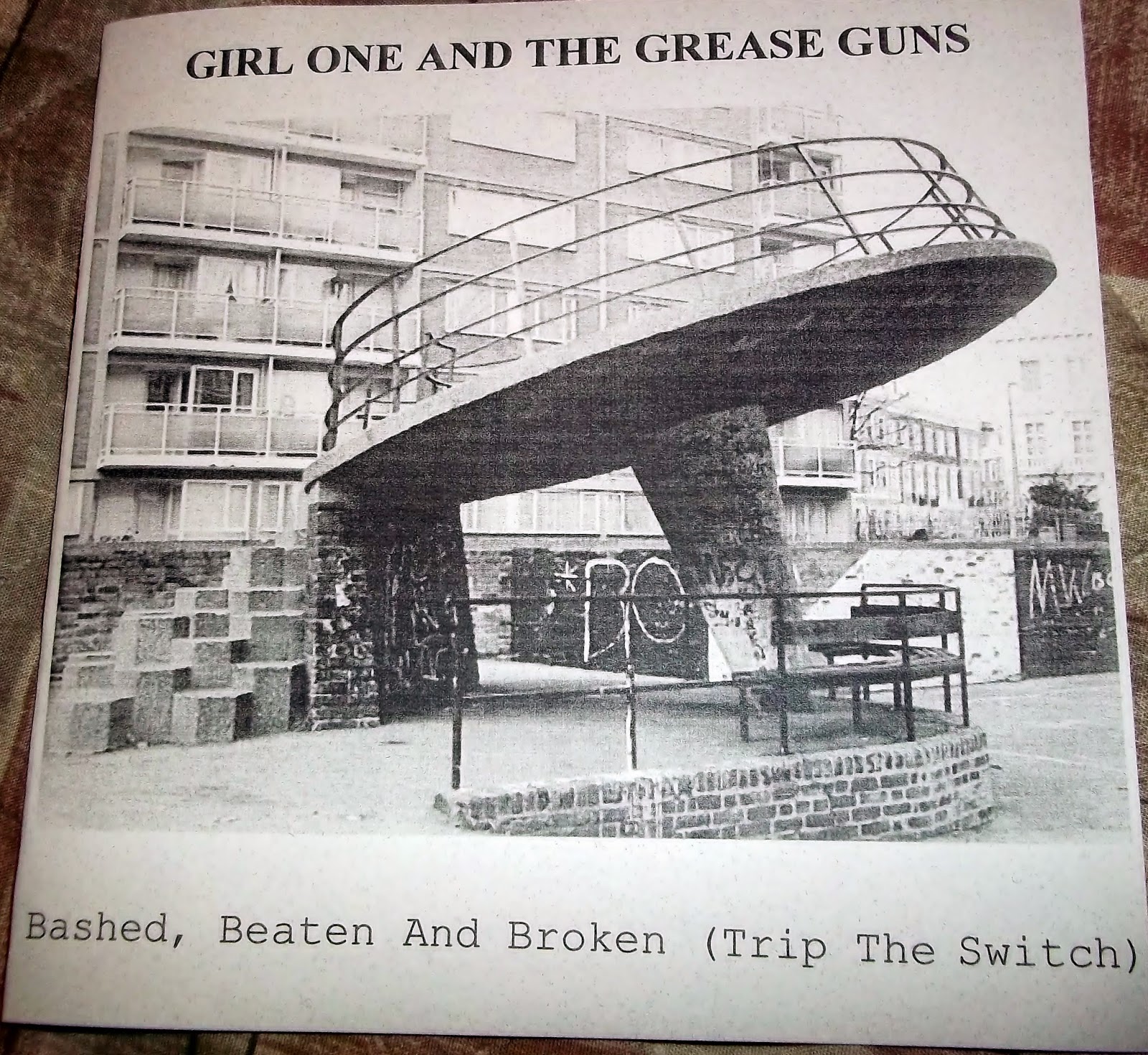 “Bashed, Beaten And Broken (Trip The Switch)” pulses and pops with mechanical slap percussion originally forged in the dark industrial days of the late 1970’s and early 80’s. Deep bass synth tones sketch out a minimalist progression, while sparsely placed guitar notes add further sonic texture. “In a place where no one cares” introduces a bleak story of “sprawling tenements” and a sleeping city in decay. 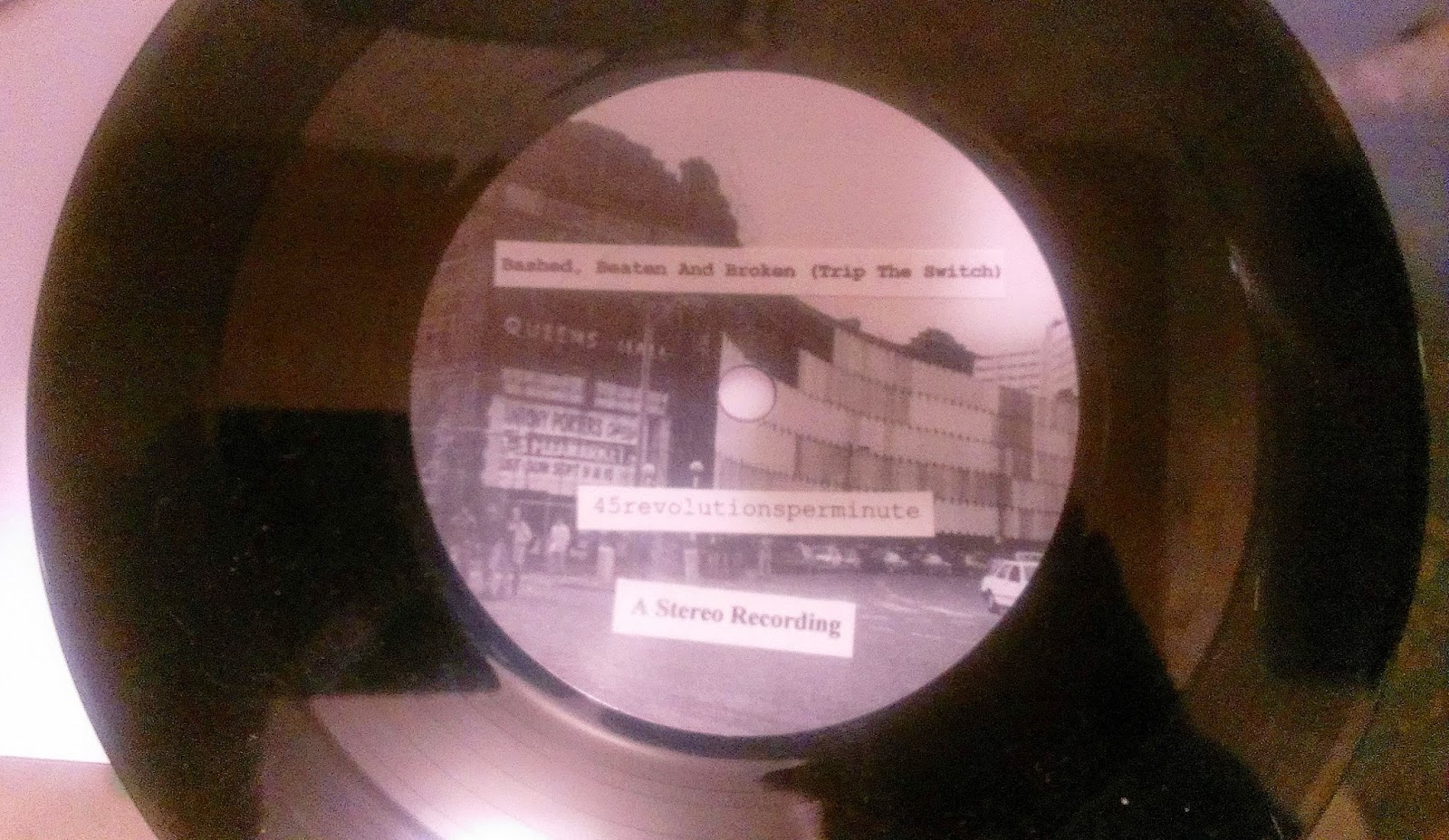 The vocal delivery of “Sissy Space Echo” is stylistically closer to the work of Lene Lovich than Genesis P-Orridge, despite the tracks overall Throbbing Gristle feel.

Other heroines of that period are given a nod, as the vocal hook “all around the sky is falling, I hear a siren calling” is delivered with phrasing and inflection of classic early 80’s era Siouxsie Sioux. 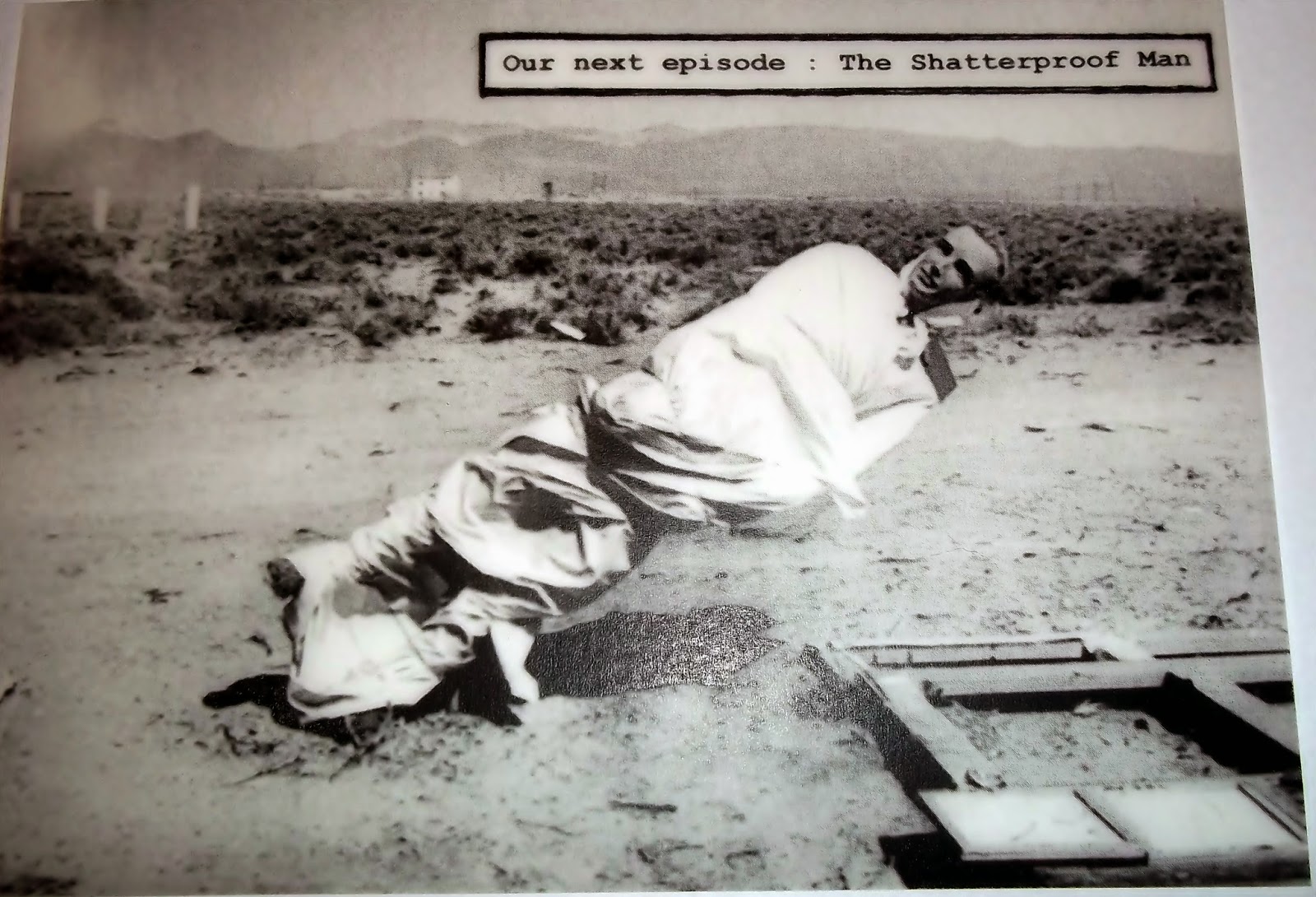 Keyboard textures build and layer as the song progresses. A vocal choir sound sample expands the sonic listening area as layers continue to add on. This sonic build reaches cathartic high point – then goes sparse again as the vocals return. The sounds of screaming Armageddon can be heard at the very end.

Flipping this 7" gem over uncovers the second track “Made Out Of Perspex.” A quicker, bass guitar and synth hook driven pop groove, the catchy lyrics “I won’t care about you, I’m an instant automaton,” get stuck in your head. 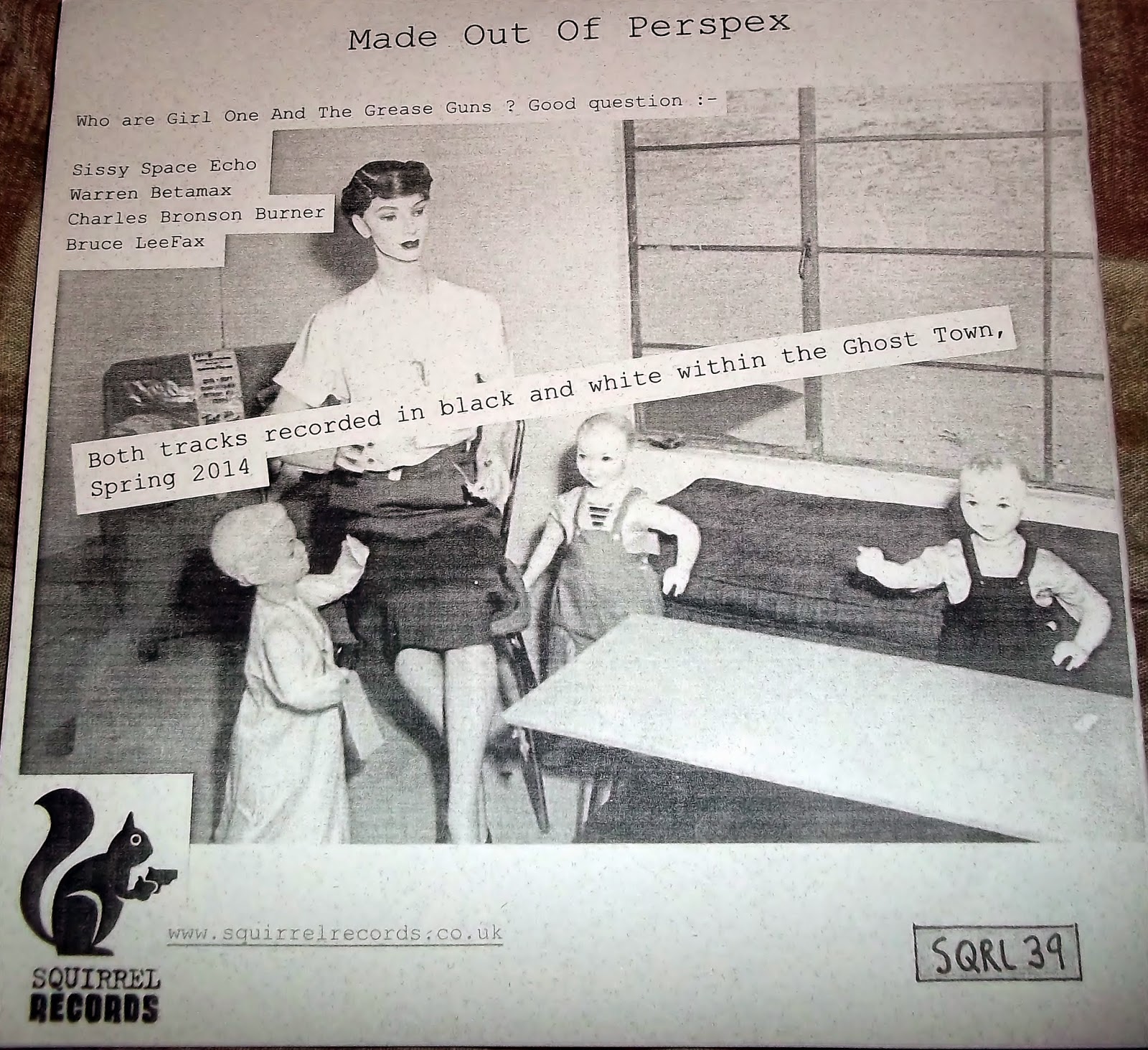 Girl One And The Grease Guns record their tracks at an undisclosed, mysterious location called the Ghost Town. All 7” singles comes wrapped in a black and white printed sleeve with grip seal plastic bag and high quality printed insert. 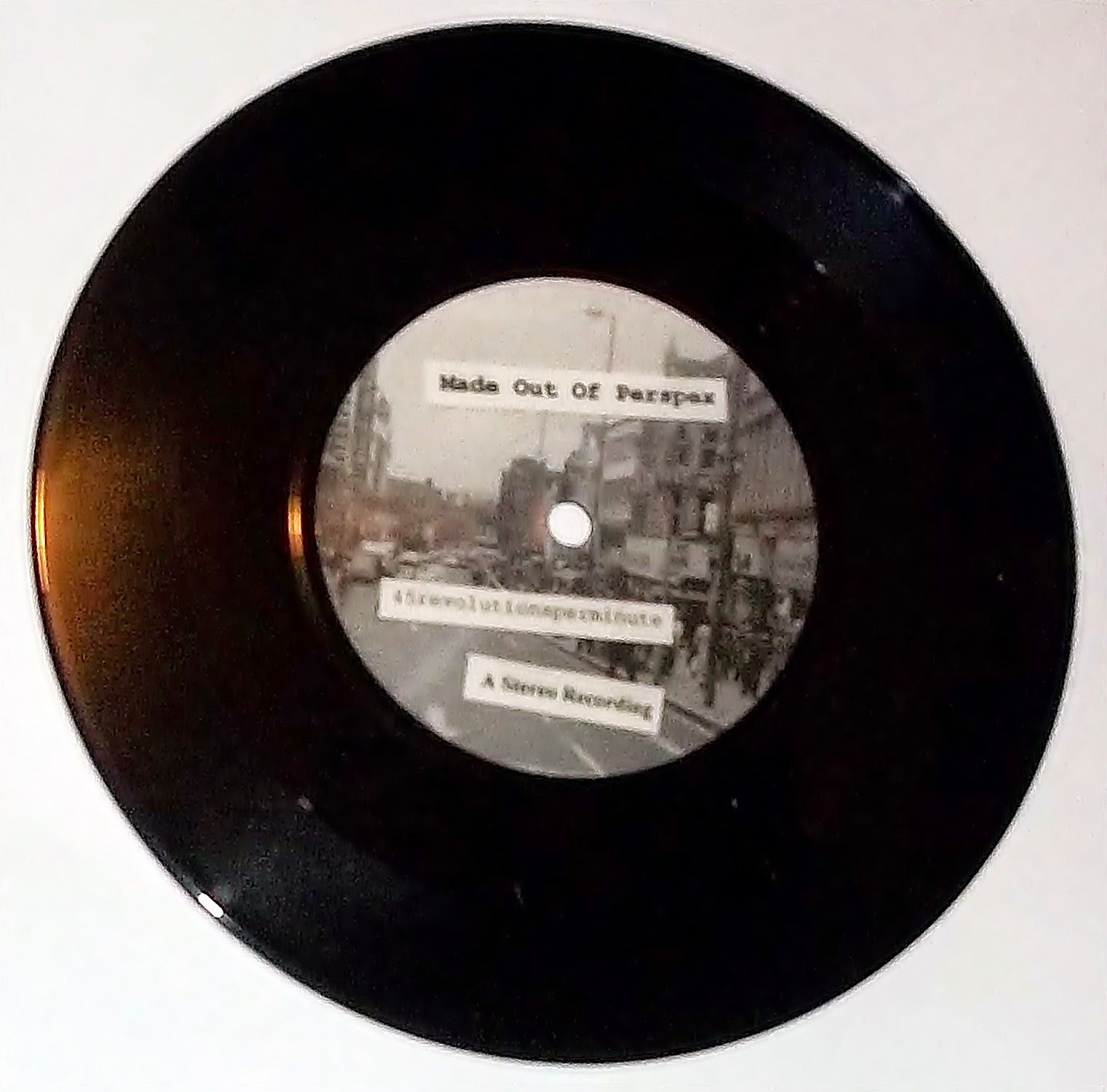 Find out how to acquire this and anything else from the Squirrel Records catalog here at their official site.

The original version of Brooklyn synth-pop collective Bowmont’s song “Just Cause You’re Right” off of their 2014 released EP 'Hovering' had a uniquely warped quality to the pulsating synth sequence. Although very much a pop song through its vocal presentation, a less predictable song structure kept the listener engaged. 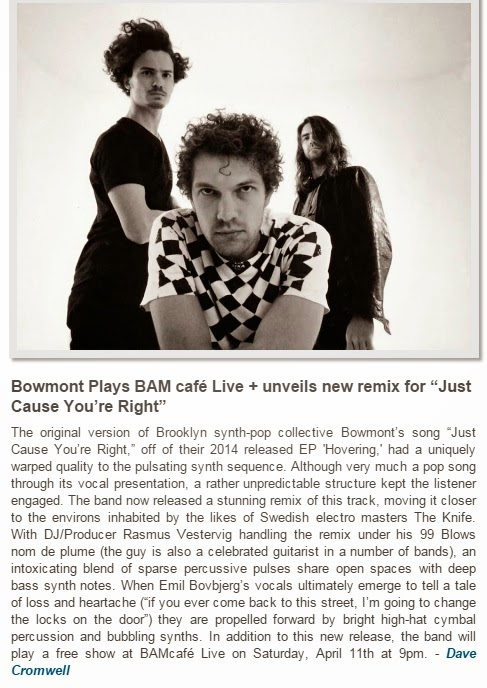 The band has now released a stunning remix of this track, moving it closer to the environs inhabited by the likes of Swedish electro masters The Knife. With DJ/Producer Rasmus Vestervig handling the remix under his 99 Blows nom de plume (and who is also a celebrated guitarist in a number of his own bands), an intoxicating blend of sparse percussive pulses share open spaces with deep bass synth notes.

When Emil Bovbjerg’s vocals ultimately emerge to tell a tale of loss and heartache (“if you ever come back to this street, I’m going to change the locks on the door”) they are propelled forward by bright high-hat cymbal percussion and bubbling synths. In addition to this new release, the band recently played a highly anticipated show at the visually spectacular Brooklyn Academy of Music / BAMcafé Live on Saturday, April 11th. 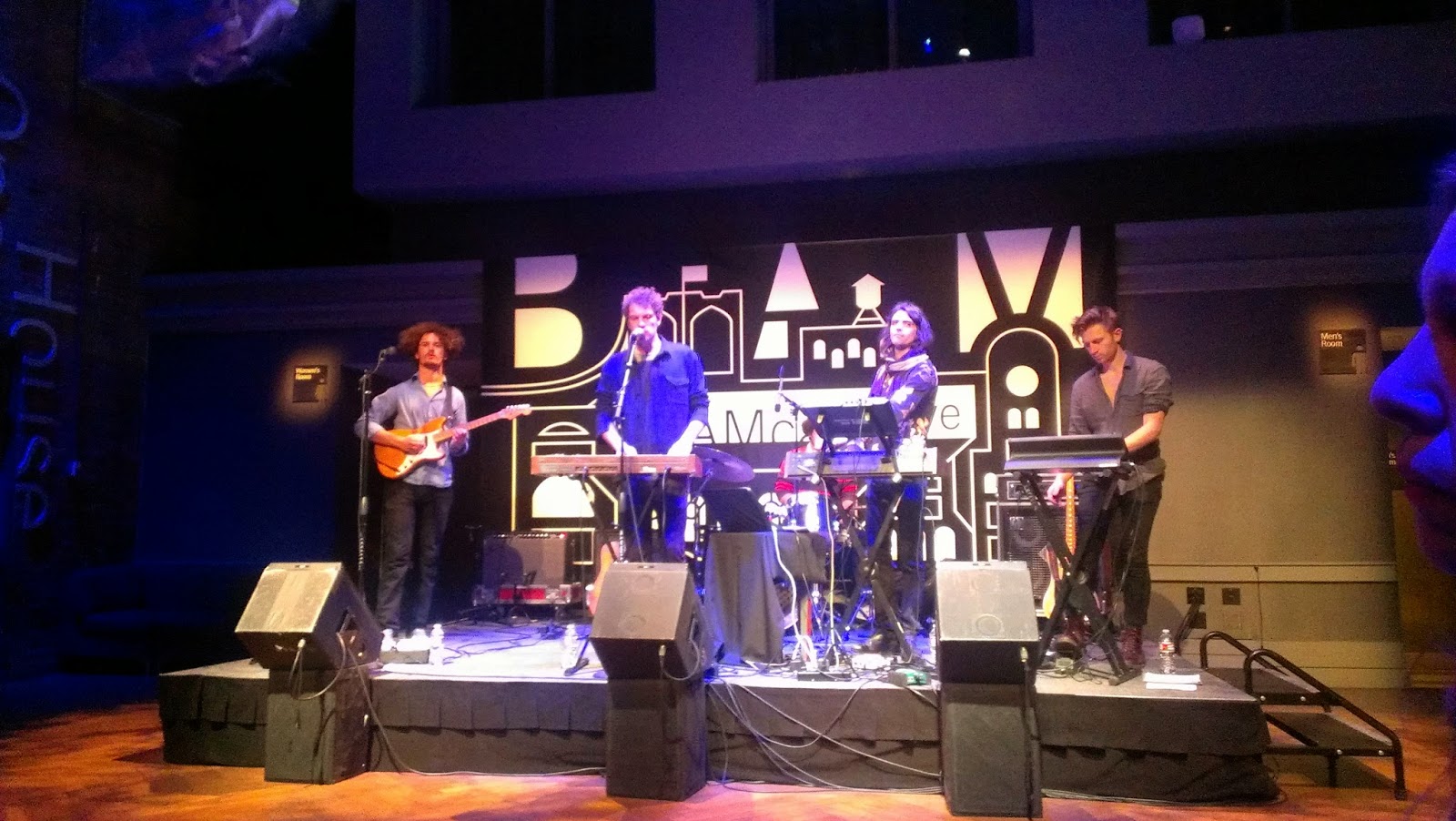 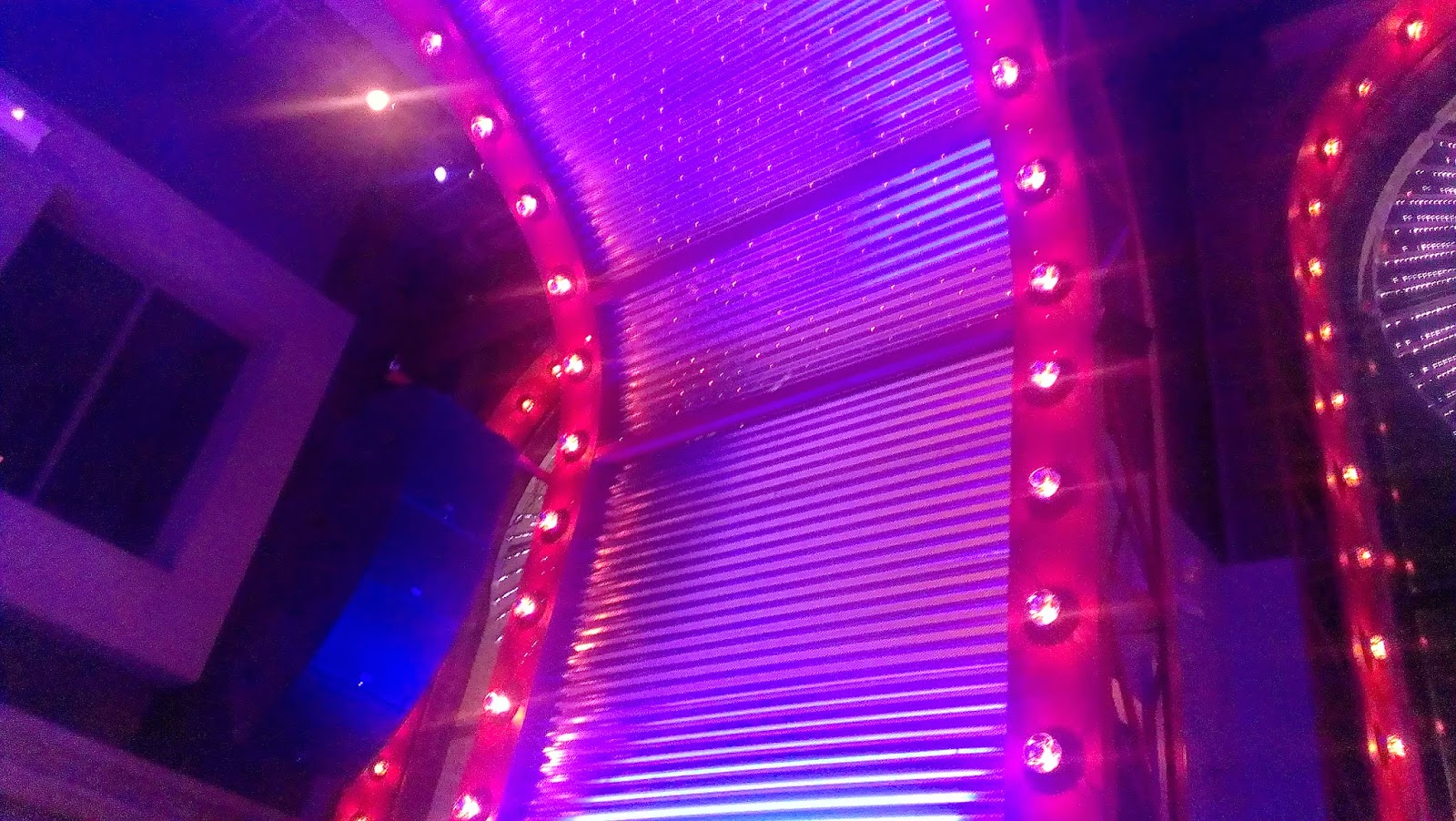 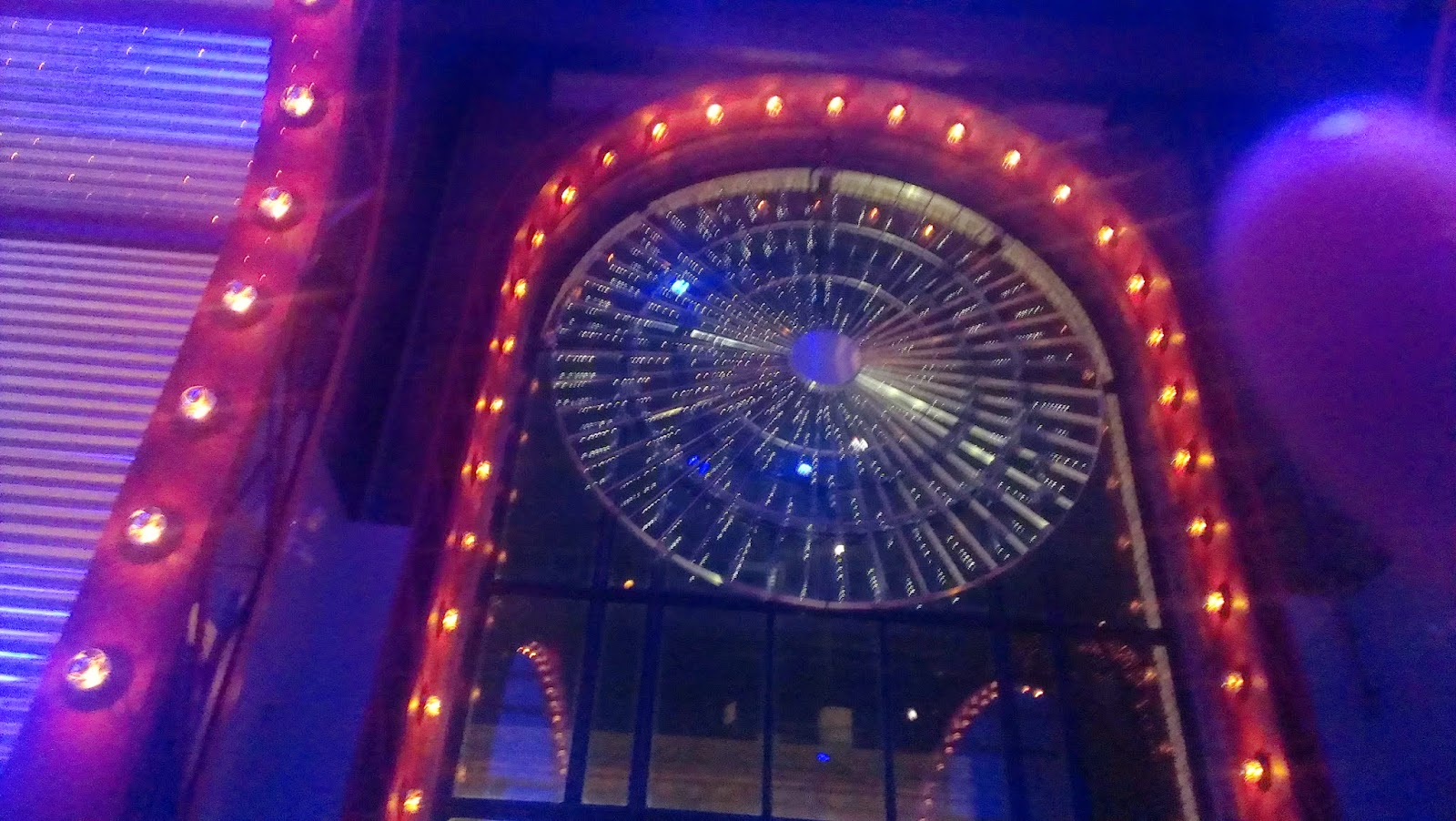 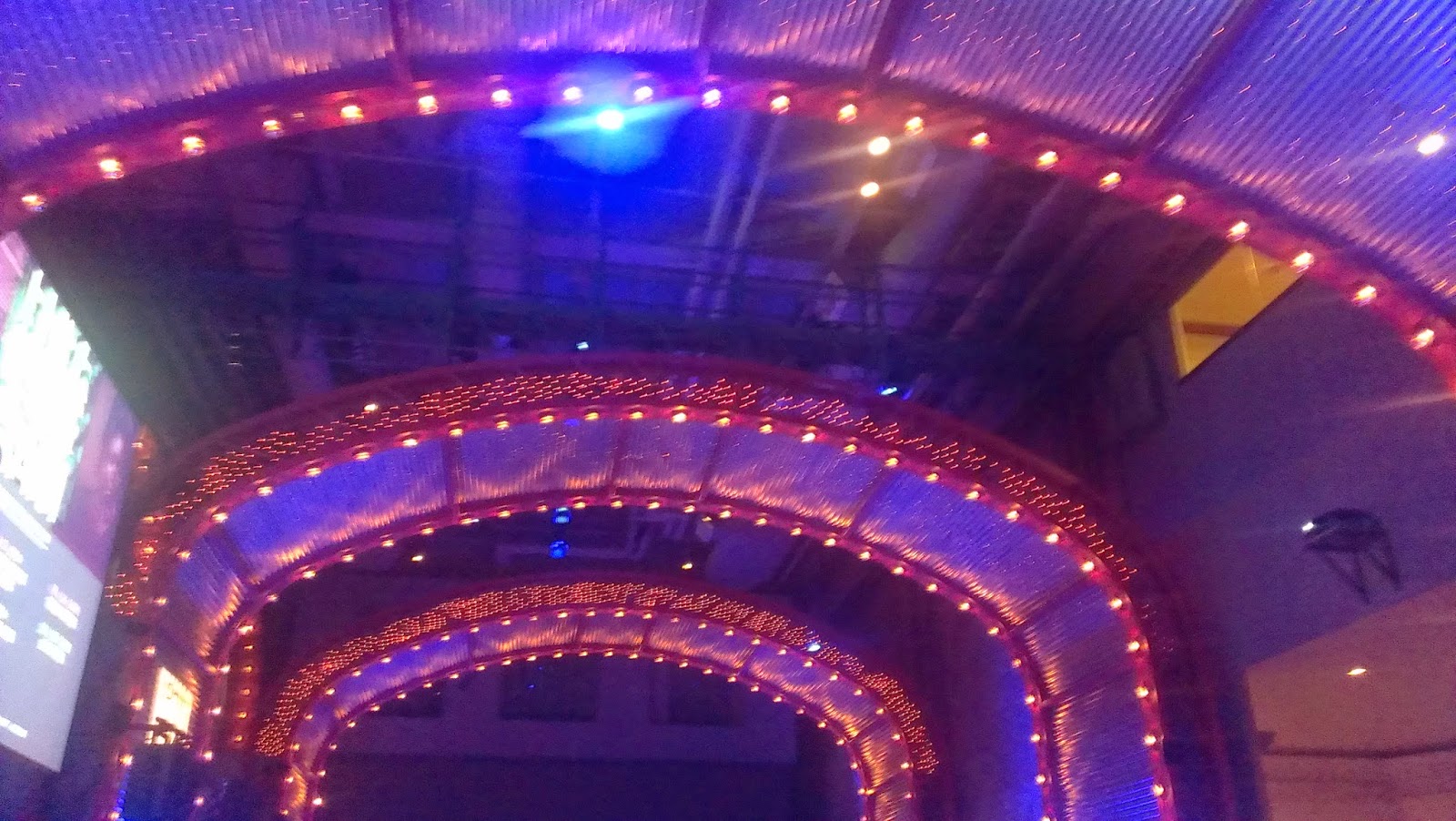 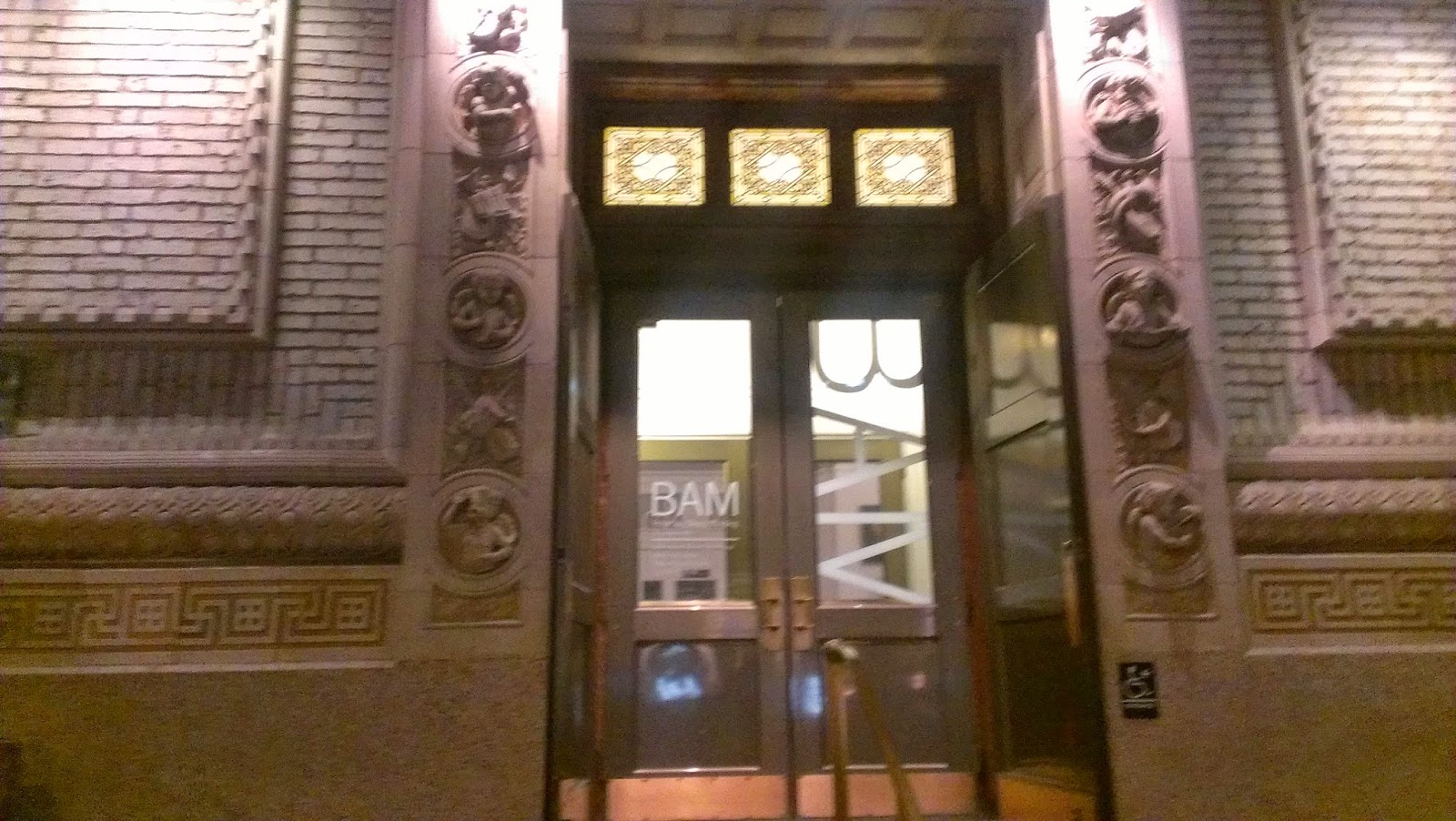 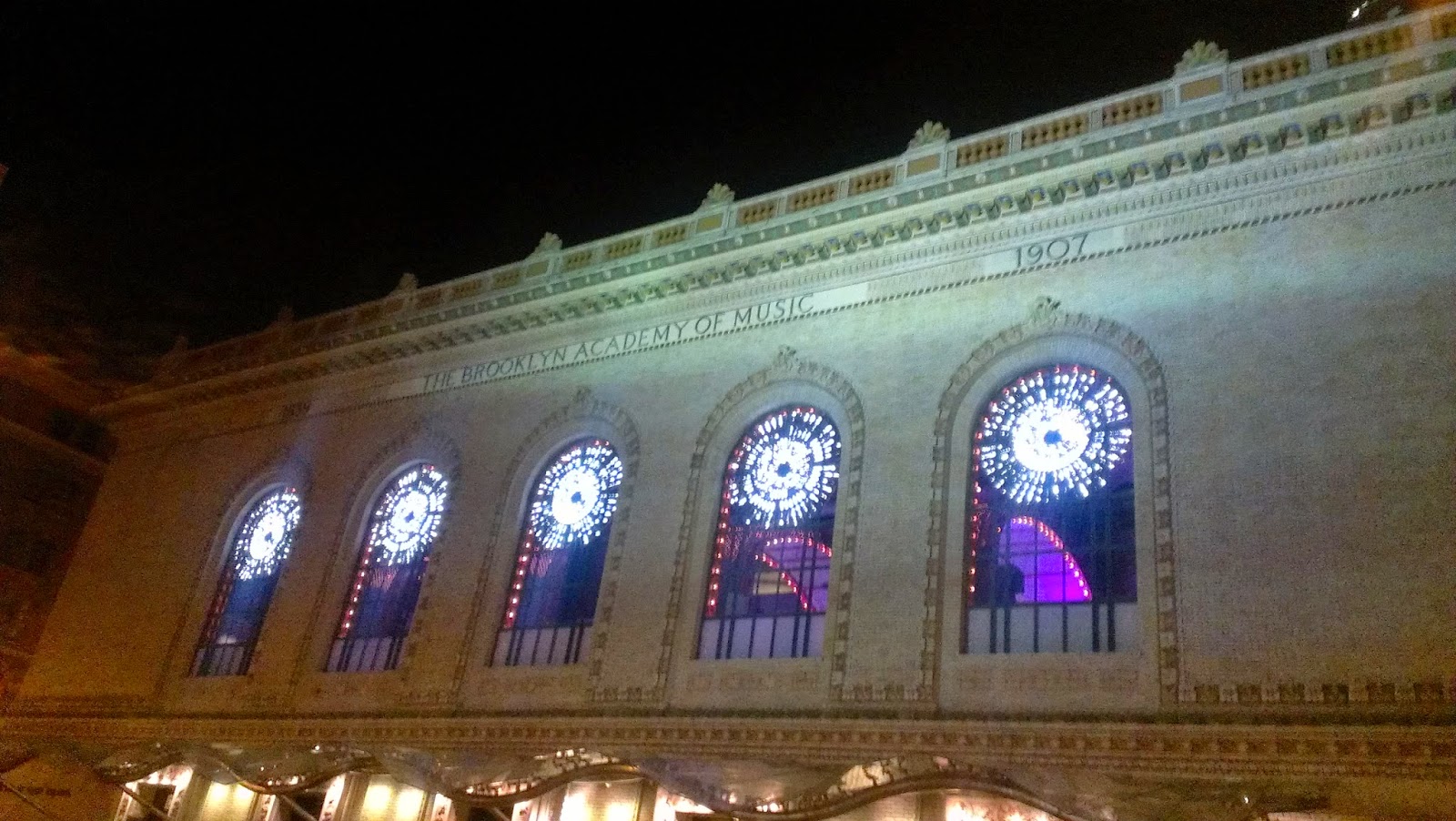 Bowmont on The Deli Magazine by Dave Cromwell


Kingston, New York’s Shana Falana have been a part of the Brooklyn dreampop fabric for a while now. Evolving and perfecting a uniquely nuanced sound through constant touring and individual track output, the band has now released their debut album “Set Your Lightning Fire Free” on April 7 via Team Love Records. 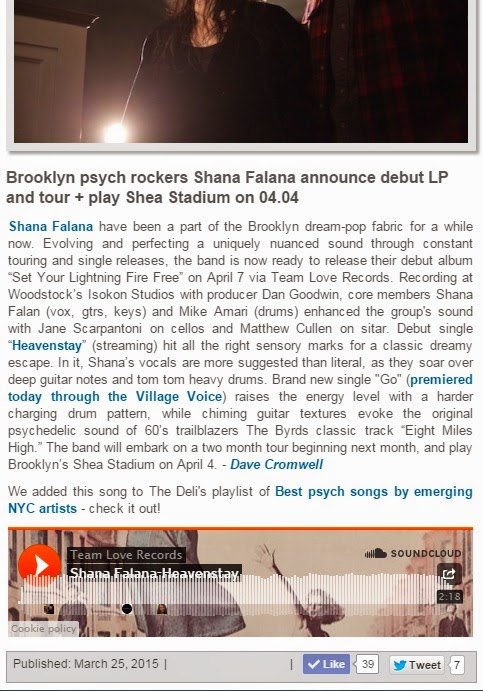 
Shana Falana on The Deli Magazine by Dave Cromwell

The early 90’s dreampop/dreamgaze movement created a style of music that continues to spawn new bands seemingly on a daily basis. The latest entry into this field is New York’s LADY, who have recently released their current EP “Washer.” Opening track “Creatures of the Night” captures the combined noisy-yet-pop sound that Mark Gardener and Loz Colbert so masterfully employed with their iconic band Ride. 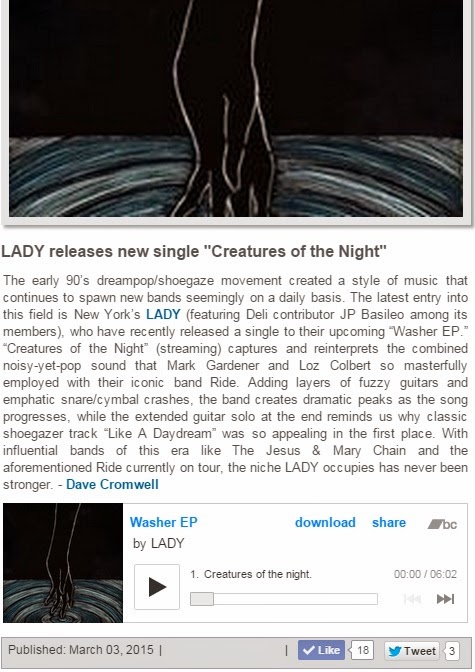 Adding layers of fuzzy guitars and emphatic snare/cymbal crashes create dramatic peaks as the song progresses. While the extended guitar solo end out reminds why the track “Like A Daydream” was so appealing in the first place. With influential bands of this era like The Jesus and Mary Chain and the aforementioned Ride currently on tour, the niche LADY occupies has never been stronger.


LADY on The Deli Magazine by Dave Cromwell