The long awaited vinyl release of Mark Crozer and The Rels latest album “Sunny Side Down” has arrived, further expanding the ways these glorious ten songs can be heard. Having released the tracks digitally in the latter half of 2016 (which was initially chronicled on this site right here), the April 28th arrival of this music on an exclusive limited edition 12” vinyl album presents another opportunity to experience these wonderful compositions. 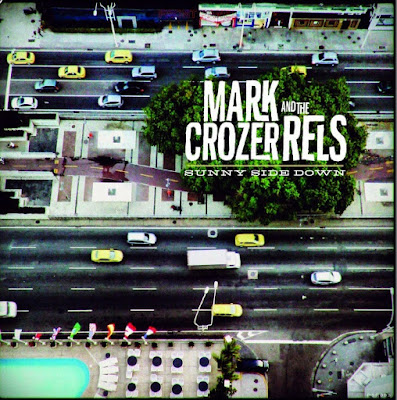 Recorded at Mitch Easter's studio in North Carolina (where Mitch engineered and co-produced with Mark and the band) the legendary Lets Active frontman who also produced R.E.M.’s early breakthrough albums has captured Mark and The Rels at their best. 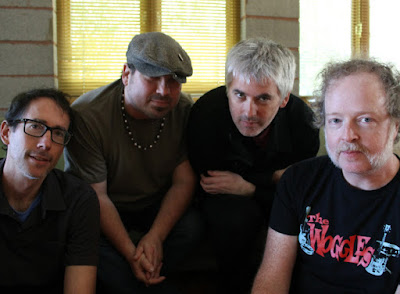 Opening track “All You Gotta Do” blends chiming strummed guitar chords with deep booming drums and an instantly hooky melody. A love song from both the pick-up line perspective and we’ve got to get out of this place attitude. “If you’re feeling tired, and kicking around – waiting for some action in this dead dog town. You need a guy like me to break you out of your shell. So come on over here night and day and ring my bell.” Which ultimately leads to a soaring chorus that concludes “we can turn this town to ash, ‘cause I think you and I are the perfect match – all you gotta do is come around.” 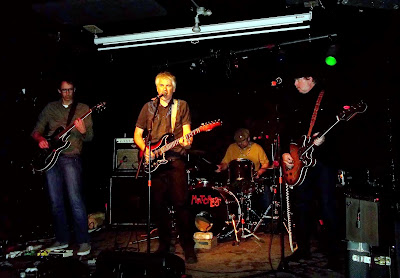 A driving forward march cadences matches static double-time percussion against fluid bass guitar and an elongated sustained melody line on the emotionally charged “Lukewarm Love.” This tale of unrequited (or barely-requited) love shows an impressive level of honest, heart-tugging lyrical writing. “You know she looked right though me - like she’d never known me - like she’d never grown attached to me. But I could have sworn that, we had gone beyond that, but now that seems like that was a dream.”

That sentiment makes way for a perfectly constructed single line bridge “now I’m back on the shelf – with everyone else” Leading in to a wonderfully bouncy (but ultimately sad) chorus: “Her lukewarm love flickered like a lightning bug – and fizzled out with barely a shrug. And though I gave myself completely to her – I could never give enough.”

The follow verse explains more: “You know she was a charmer, I thought that we were partners, like we were getting in that zone. I told her she was special, all she said was ‘yeah well’ I think we should take this slow. And that’s when I sensed – she’d always been on the fence.” “There was a time – when I believed in love devine. But now it seems, that it’s a fantasy.” This song could stand proudly next to the best of Elvis Costello, as it shares the same level of high quality songwriting: a great melody and sincere, insightful lyrics. 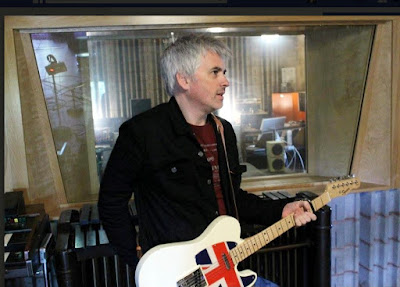 Whenever you hear “Baaaa, bop, bop, bop, baaa’s” used in a song, the temptation is to think of The Beach Boys.  No one employed that vocal technique better.  Even Jim Reid dipped into his Brian Wilson memory bank for a song on his band’s recently released album Damage And Joy with the track “Black And Blues.”  The first half-a-minute of “Here Comes the Storm” makes use of that background vocal technique for optimal effect. The jangly little ditty keeps the mood light and airy, as it attempts to hold off imminent thunderstorms.   Floods and tidal waves make their way into the picture, but this song is more about mood and melody than any tangible storytelling.  That point is driven home on a truly lovely chorus, where the chord selection backing the lyric “to put a smile, on my face again” is achingly romantic.  The final minute takes what was a traditional pop song and stretches it out over a coda where the title is repeated like a mantra, drums rumble across toms and a white noise build-up creates the sonic equivalent of weather borne chaos. 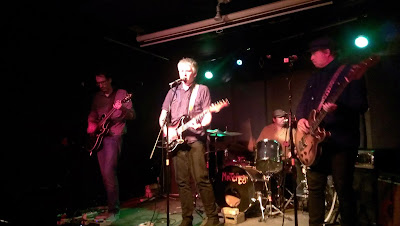 An angular rhythmic pattern of syncopated drumming against a wiry bass line and lengthy ascending-then-descending guitar figure introduce “Photographic Memory.”  “I got this picture stuck in my head of an Elephant on water skis” it offered up as proof of the mental images captured. “If you could plug into my mind then you would know what I’m saying is no lie” hints at our current technological age and the possibilities ahead.  Shifting rhythm to a straight ahead chugging rocker, the chorus spells out that having “a photographic memory always comes in handy – never fails me – never lets me down.” “You think it’s crazy what I’m telling you, but it’s not just a fantasy” the author continues.

Nice little Beatles-like break (and you have to mention The Beatles at least once referencing Mark’s music) on the break that goes: “Oooooh – internal memory. Oooooh – I know you believe – in me.” A final, near spoken word segment punctuates each stated line with a tasty guitar riff behind it. “Just when you think, you’ve seen it all – out of the sky, another star falls. Snap it up, with my little eye – store it away on the eternal drive.”

There’s an Americana feel and cow-punk snarl to the just over two minute track “Plasma.” A song my friend Steve called “an ode to the colorless liquid found in blood and lymph” the sentiment drips with disgust at the BS we are sometimes shoveled. “Your lips have gone astray – like a 21st century lover. I could feed them with a kiss – but pretty soon they’ll start to whisper – garbage like ‘be my plasma’.” Steve is also right that the end out will make you laugh out loud. 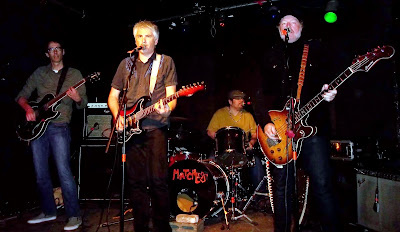 Pairing an upbeat tune with peculiar lyrical content is a technique often used to lighten the subject matter.   “Loathsome Freddie” we discover likes to “spend his leisure time, with the recently departed.” In fact “he gets his pleasure . . . at the morgue.”  While that lurid picture might send your imagination running off in unsavory directions, “he doesn’t care what you think about his business.”

The song is actually a real toe tapper with this perky country-esque in that Buddy Holly kind of way chorus that goes, “Loathsome Freddie is always ready to receive them in the afterlife.” While lines like “when he’s unzipping at the feet of the peacefully dead” can be taken at least two different ways, one can always imaging a CSI episode where the medical examiner is simply cataloging recent arrivals.  The featured guitar solo is off kilter just enough (sounding more like a muted sitar) to underscore the songs oddball nature.  A repeated vocal hook that “he’s happy – he’s very very happy” is reminiscent of the amusingly lighthearted approach to The Beatles (there they are again) “Maxwell’s Silver Hammer.” 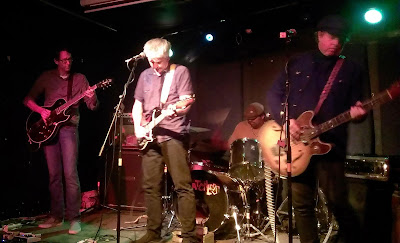 At over five minutes in length, there’s a slow easy groove to the albums longest (and final) track “Say Hello.”  Exhibiting a similar guitar noodle-y vibe that saw Dean Wareham channeling Jerry Garcia’s Grateful Dead through his own band Luna, the expanded style is a welcome change.   It’s the kind of trippy feel that slides between introspective thoughts and mescaline-in-the-desert visions that may involve seeing visitors from other planets.  The addition of keyboards contributes further to the jam-band stylings that post-Dead bands like The Chris Robinson Brotherhood do so well.  As the instrumental segments progress, the sonics move closer to Luna channeling The Velvet Underground's more experimental moments, showcasing Mark and The Rels as an edgy, ambient rock force.  The potential for stretching this one out live at an outdoor festival is something to wish for.

You can order a limited edition Vinyl Copy of the album from Planting Seeds Records in classic black or translucent yellow now.


Previous features on this site about Mark Crozer and the Rels:


Bandcamp Catalog + "Sunny Side Down" Preview


Previous features on this site about Planting Seeds Records: 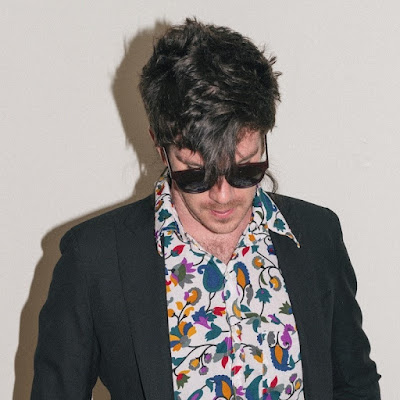 Reverberated guitars, insightful lyrics and lush backing vocals come together on Simon Doom’s recnt release “I Feel Unloved” (streaming below). Taken from the debut full-length “Babyman” due out this May, the production hand of MGMT duo Ben Goldwasser and Andrew VanWyngarden account for much of its sheen. Opening lines “In the seminaries, in the shopping malls, think so eloquently, but I can’t speak at all,” depict a sense of confusion and loss. Familiar routines involving “business centers” and “concert halls” provide no relief leading to the question “what did I do to earn this?” Simon O’Connor delivers the creative force on this project, after spending time with like-minded artists in the bands Kuroma and Amazing Baby.  Using the experience of parenthood as a motivator to complete this record, its sentiment appears wrapped up in the album’s title. Catch Simon Doom live supporting Piebald on 5/24 at The Outer Space Ballroom in Hamden, Connecticut and with The Lemon Twigs on 6/1 at The Music Hall of Williamsburg.

Simon Doom on The Deli Magazine by Dave Cromwell 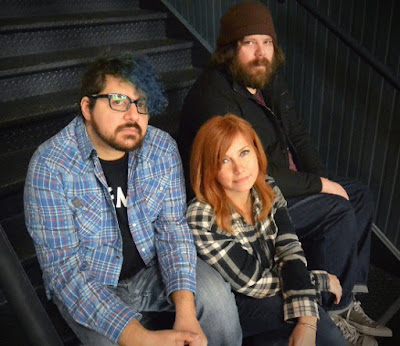 Readying their follow-up release to 2014 debut record “Sighs,” Overlake share “Winter Is Why” (streaming below) from sophomore album “Fall” due out May 12th via Bar/None Records.  The track emerges via a guitar figure delivered with orchestral sensibility, creating an immediate mood of majestic grandeur. Forceful power trio drumming and counterpoint descending bass tones further punctuate unexpected rhythmic accents underneath this rising melody.  Settling in to calmer patterns, dreamy vocals describe how the “summer sun hangs around” and “windswept cones on the sand” suggest the winter season.  This over five minute track successfully blends the quieter passages of gazey icons My Bloody Valentine (think “Come In Alone”) with that bands more explosive and pitch-bendy moments.  Currently on tour, their record release show at Mercury Lounge will happen on May 12th with support from local favorites Dead Stars and Heaven.


Overlake on The Deli Magazine by Dave Cromwell 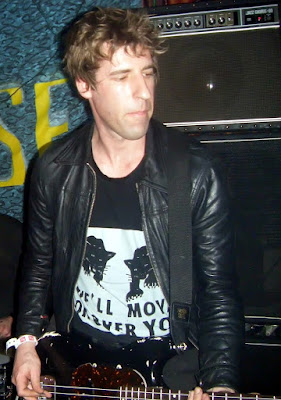 In the spaces between world-wide tours as bassist for A Place To Bury Strangers, Dion Lunadon spends time writing and recording his own solo material. The results of those efforts will culminate in an 11 track self-titled debut album he recorded over a three-month period in Brooklyn.  The album and preview track “Fire” (streaming below) features contributions from sometimes APTBS drummer Robi Gonzalez and guitarist Blaze Bateh from Bambara on select tracks.  With live unprocessed drumming, Farfisa organ, distorted guitar bursts and Dion’s descending bassline, a noisy hybrid of punk, 60’s garage and psychedelia come together on “Fire.”  The title line chorus shares a spiritual connection with Arthur Brown’s 1968 hit of the same name. The mood here is much heavier though, with lyrics that go “So stressed out from the negative vibes, it sounds like the truth but you know it’s a lie.” Melodic guitar lines appear in places, adding a more traditional rock structure. The self-titled debut album will be released on June 9th via Agitated Records and will be available via his Bandcamp page.


Dion Lunadon on The Deli Magazine by Dave Cromwell