Everyone who knows me – knows how much I love new bands. Especially new bands that look to the greats that came before them as inspiration and a starting point for developing their own sound.

Such is the case with Los Angeles based band Tennis System. One day stumbling across their Twitter self-description – “If My Bloody Valentine & Sonic Youth had a baby with The Kinks it would be named Tennis System” - I knew I had to give them a listen.

I’m glad I did, as they truly do come as advertised. Though I had to chuckle a bit (and agree) with the band's bassist Guylaine Vivarat who stated “I think we need to work on the Kinks part a bit.” Indeed, there isn’t much that can be pegged Kinks-like in their *sound* (though quality lyrics certainly qualify). Without a doubt the My Bloody Valentine-like pitch bends are there – as well as the Sonic Youth-like extended thrash-down jam outs. What’s not to like? 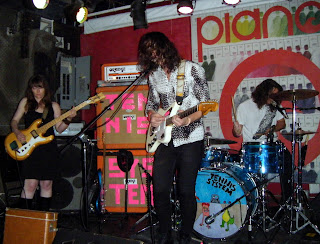 So it was - after a few months of back and forth messaging with frontman Matty Taylor (who graciously sent me a digitial copy of their latest album "Teenagers" - which I absolutely love) - there was the opportunity to catch them live - at one of my fave NYC venues - Pianos, on Wednesday, September 21.

Give a listen here to the opening song on this night.


Matty Taylor (guitar and lead vocals), Misha Bullock (drums and background vocals), Christopher Norman (lead guitar), and Guylaine Vivarat (bass) are masters of loud and dirty anthems, but rising above the noise that blankets them are Taylor's beautifully sung, dreamy lyrics inspired by both love and art. 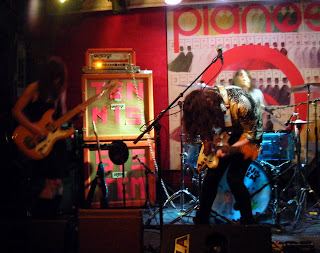 This band is a cut above so many of the so-called “noise” bands out there, however. The songs are well constructed and Matty can actually sing. Addtionally, Misha provides quite a bit of assistance with the overall vocal sound - all the more impressive that he does this while furiously pounding away on his drum kit. Those drums, by the way are a killer set of clear, see-through beauties made by the masters at Ludwig. 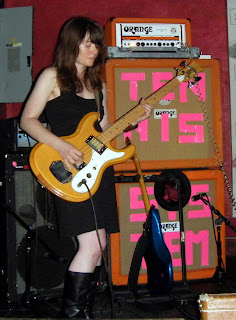 Bassist Guylaine Vivarat is originally from France - but now resides in Los Angeles with the rest of the band. Post-show we had an interesting and animated chat. As the MBV and Sonic Youth influences were already established, I asked Gulaine about those bands bassists. She expressed an appreciation and admiration for Kim Gordon. Addditionally she surprised me somewhat by namechecking "classic rock" bassists like Geezer Butler (Black Sabbath) and John Entwistle (The Who) as personal faves. 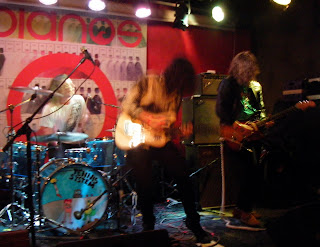 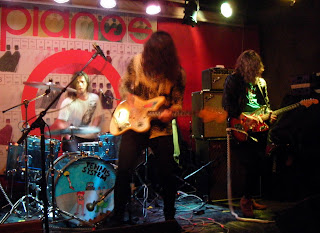 It's a ferocious sound, but one that never becomes totally unhinged. 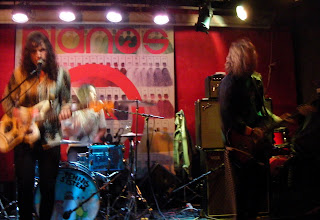 For their final reverb-drenched song of the night, Tennis System pulled out all the stops, to deliver an appropriately loud and dirty anthem - this one aptly titled "Dead Honey" 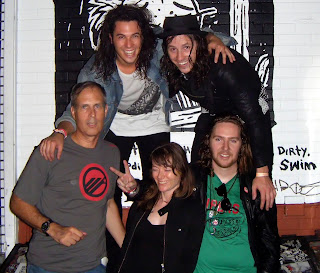 Post-show - going for a "dirty swim" with the band. 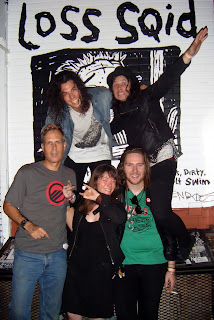 Shana Falana - In The Light 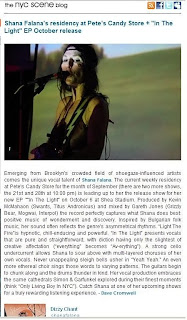 The current weekly residency at Pete's Candy Store for the month of September (there are two more shows, the 21st and 28th ...at 10:00 pm) is leading up to her the release show for her new EP "In The Light" on October 6 at Shea Stadium.

“Light The Fire” is hypnotic, chill-enducing and powerful.

Listen to this enchanting track:


“In The Light” presents vocals that are pure and straightforward, with diction having only the slightest of creative affectation (“everything” becomes “Av-erything”). A strong cello undercurrent allows Shana to soar above with multi-layered choruses of her own vocals.

Never unappealing sleigh bells usher in “Yeah Yeah.” An even more ethereal choir sings those words to varying patterns. The guitars begin to chunk along and the drums thunder in kind. Her vocal production embraces the same cathedrals Simon & Garfunkel explored during their finest moments (think “Only Living Boy In NYC”). 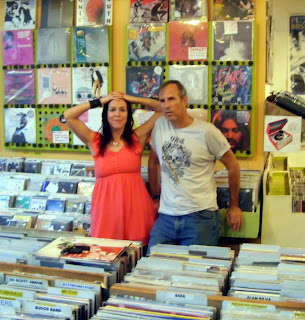 On a recent afternoon, Shana and I did a bit of shopping in Williamsburg, Brooklyn - and I conducted an interview with her.

Check out the first part here:

You can spend hours looking through all the wonderful treasures a specialty record has. 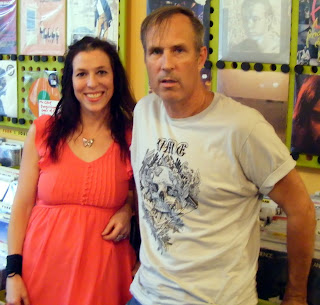 Part 2 of our Interview:


Official video for "In The Light"


Catch Shana at one of her upcoming shows for a truly rewarding listening experience.