Singles provide the focus for this month of April, spring bloom DaveCromwellWrites Feature. For every EP or Album release, there is often one particular or current song that serves the artists best as an introduction to their latest music. A broad field of geographical locations and sonic styles are covered in the reviews below. While frequently covered genres of dream-gaze and power-pop remain a constant, explorations into prog, symphonic and harsher metal appear as well. Familiar labels present new recording artists, while others find their way in on their own. 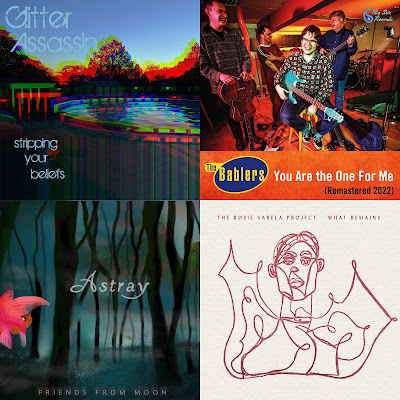 The folks at Shoredive Records are at it again, and instinctively knows what flies here at this site all too well. Their “new format, straight to the point” pitch method brings news of the labels 116th release featuring an artist out of Chicago called “Glitter Assassin.” That cool name along with the promise of noisy guitar layered indie pop with a heavy gazer influence will always garner a listen. The epic in length, six and a half minute lead single “Burning Next To Mine” ticks all the right aforementioned boxes, and as such receives full DCW analysis. 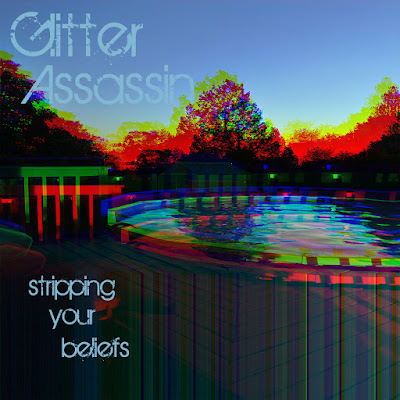 Deep twangy bass notes lead everything in as synths rise up from nearly inaudible to a loud dynamic swirl. With an electronic percussive clack the lush guitar melody begins in earnest, transporting the listener back to the golden age of late 80's/early 90's dreampop romanticism. As vocals begin with the line “criminals we lay, right next to defeat,” the tone and cadence is reminiscent of Richard Butler's impassioned rasp in his band The Psychedelic Furs. That touches of Bowie can also be felt makes sense as Butler was inspired by the Blackstar Alien as well. The guitars are used for maximum effect as echo lines following many of the lyrics presented (an excellent technique) and the bass guitar maintains it's necessary presence. If there's one slight criticism, the drum track is somewhat rudimentary. It could certainly benefit with a Colm Ó Cíosóig or Loz Colbert on the skins, but then again – any band would welcome those guys! 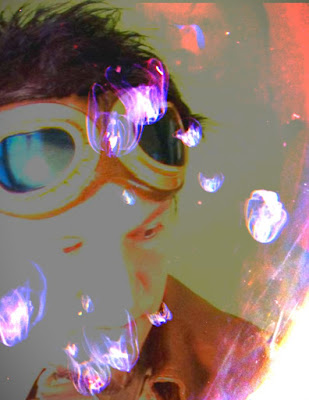 However the track lifts off to another stratosphere on the gorgeously lush chorus that begins “we can feel it taking over.” The pure shimmer of guitar chords propelling this beautiful melody forward perfectly captures the essence of Robin Guthrie's work with The Cocteau Twins and all the bands that followed him. As the chorus unfolds to reveal the song's title, the been-there-before sense that even in the act of lovemaking, some secrets still remain, with “your lies, burning next to mine.” Other elements creating delightful sonic experiences are things like the reverberated single guitar note Raveonettes-style breaks immediately following the chorus. Verse two delves further into visions of “heaven” and “deceit” while providing the albums overall theme of “stripping your beliefs.” A sudden dropout at the 4:23 mark leaves no other sound than a hum and tick, before bass guitar and snare drum rattle leads it all about in for the triumphant final choruses. Again, intuitive placement of descending/ascending guitar lines on this outro adds another level of exquisite melody to it all.
Listen to this incredible track below and find out how to acquire the full release here:
Connect with Glitter Assassin on their Social Media here and Shoredive Records here.
*  *  *  *  *
Respected Label BIG STIR RECORDS rolls out the first in a series of singles highlighting Finnish power-pop guitar group The Bablers. Previously released in Japan and Finland only in 1998, the track "You Are The One For Me" has been newly remastered for a full global reissue in 2022. This lead single is from the forthcoming reissue of a newly remastered edition of the band's second album “Like The First Time.” On the single's original release, it garnered heavy airplay in Japan and received product placement attention while being broadcast during the heavily-viewed Tokyo marathon. Now remastered for release to new territories in a new millennium, this first track begins Big Stir's unveiling of the “lost” middle chapter of THE BABLERS' career – the Japanese Saga. 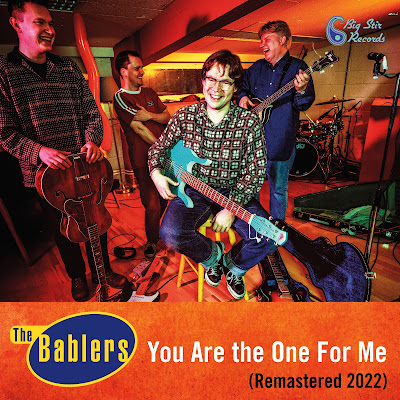 With snare drum and rolling toms intro, “You Are The One For Me” instantly kicks into power-pop gear as chiming/buzzing guitars mark out its upbeat progression. Singing the opening (title) line with John Lennon-esque tone, subsequent lines “you really turn me on” and “your eyes your eyes” double down on the captured spirit of early Beatles. Hitting the first change a half-a-minute in, “I never thought that this could happen” and “I never thought that this could be real” are separated by chiming Rickenbacker-style jangle. Further segments immediately follow - “oh, no no no” with punctuated chord changes “not for me.” Expanding the lyrical story about “a beautiful girl” and “proud that she loves me,” liner notes reveal it was written for a friend's wedding as a testament for their future life together. There's a sense of sheer joy in the instrumental sections that show how guitars, bass and drums locked together are all you really need for a perfect pop song. Add in those aforementioned Lennon/Beatlesque vocals (and jubilant lyrics) – with just a touch of keyboard harmonium melody enhancement in just the right places, and you have the ideal recipe for this magnificent song.
Check out this beauty here:
Find out how to grab this single here:
Keep in touch with all good things Big Stir Records here.
*  *  *  *  *
Social media promotion can be as much of a “message in a bottle” (washing up on some distant shore) than intentional direct hit occurrence. An interesting musician recording under the name Friends from Moon found this site by searching Instagram hashtags (#musicreviewers, etc.) Knowing this is beneficial to all who are in need of connection in this regard. The artist in this particular instance is based out of New Delhi, India and specializes in Prog/Symphonic Metal, Alternative Rock, Soundtrack and Electronic/Ambient Music. Ritwik Shivam developed his band name after a hallucination trip under a full moon (a powerful force where “friends” can in fact be detected). His latest release “Astray” is a concept album in it's truest sense, covering themes of identity crisis, human decadence and alienation. 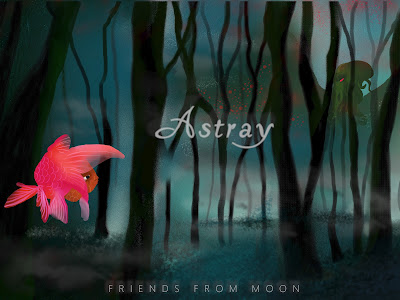 After prior singles releases, the sixth and penultimate storytelling track “Marvels beyond Madness” now arrives with a brilliantly animated lyric video. Clocking in just under 7 minutes in length, there is ample room to develop and expand upon a variety of musical themes. With the opening minute building out of foreboding ambiance, the sounds of industrial hum, tubular bells, rushing wind, clanging notes, and garbled noises of otherworldly nature serves as the basis for what follows. As metal-heavy math rock riffs commence adjacent to hyperspeed percussion, rough-hewn vocals commence with the story unfolding. “On my land – who's the butcher? Plague on the kin – betraying your creator” serve as the opening lyrical salvo. In keeping with the albums overall conceptual theme, the protagonist is confronted by a Lovecraftian monster-like entity which is, throughout, a metaphor for the darkness inside him. Just two minutes in and a number of distinct structural are experienced, with heavy guitars driving rhythms in frantic rising and descending directions, as drums pummel away in ferocious speed-metal patterns. The two and a half minute mark focuses solely on a :15 second space-rock guitar interlude (minus any backing) before returning to a full-on death-metal barrage. 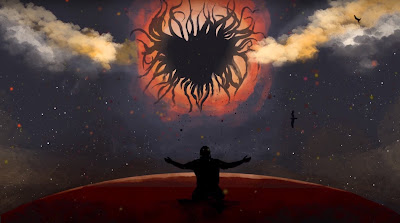 Three and a half minutes in ushers in yet-another sonic change via an instrumental interlude that emphasizes keyboard chords, muscular percussion underneath and a rising bass guitar and is reminiscent of Chris Squire's dominating work with his band Yes. “Light a flame, just follow your instincts” commences the next driving metal section. This become more orchestral as it expands, with call and response vocals on lines “light a flame” followed by “quit running away.” Another cinematic plateau is reached at the 4:15 mark with everything dropping out once more leaving only the ominous sound of a void surrounding you. Chugging electric guitars return after :15 seconds or so, which suddenly leads into more defined thick buzzing metal guitar figures. Precision piston drums return along with another round of storytelling vocals that marries elements of what Rob Zombie does with more complex structures. Final vocals touch on the title line's meaning “show me your secrets – marvels beyond madness” and a resolution where death is no longer feared, in order to belong to a home.
Check out this incendiary track in all it's epic glory here:
Find out how to Purchase/Stream "Astray" via this link
Follow on their Facebook and Instagram
*  *  *  *  *
Back in November of last year, this site reviewed the album “Winter Skin” by psychedelic dream pop and gazey indie music band EEP. The El Paso, Texas collective is now back with a side-band release called The Rosie Varela Project.  First single “Fault Line” from the coming album “What Remains” is now out and receives the DCW review below.  Additional singles are scheduled for future release leading up the full album drop on June 3. 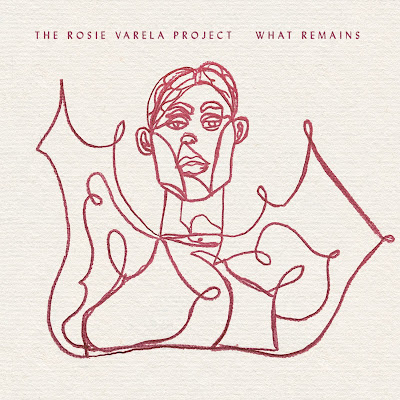 Grainy synths and acoustic guitars open the current single “Fault Line.” Gentle background vocal “ahhhs” and tinkly piano work their way into the mix, adding to the moody atmosphere. Lead vocals commence in a soft, breathy manner as Rosie sings “He’s a fault line - He only wants to shake you up.” As the vocals develop to a fuller projection, drums emerges underneath the still floating ambiance. A bolder voice emerges with an impassioned “Hold on” segment, where those words are repeated with impressive nuanced distinctions. As the story unfolds, a sense of wary caution becomes evident with each passing line. Things get quiet at the two minute mark when the warning “so hold your breath” becomes a mantra lasting for a good twenty seconds.  At that point full instrumentation returns with ardent vocals singing out in full imploring to “let him pass by.” The sonics behind fill in with wonderful swirling motion, synths, rising background vocals and an overall psychedelic Sgt. Pepper-like feel.
Listen to this fantastic track here:
Connect with The Rosie Varela Project on Bandcamp and Instagram.
Check out this previous review on Rosie's other band EEP and the album "Winter Skin" here.
*  *  *  *  *
Posted by DaveCromwell at 7:50 AM 42 comments: