Less than a month since the much-too-soon passing of Lou Reed sent a collective shock around the world, an overwhelming number of tributes pouring in for this uniquely influential artist underscores the indelible mark he made. Lou departed this mortal coil on Sunday, October 27, 2013, leaving a body of work that is as important as any composer in the last century. The amount of appreciation for, and reflection on these creations, stands as a testament to his visionary force on both music and art. 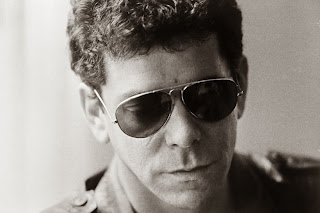 Owning all the records and attending numerous live shows throughout the various stages of his career guaranteed a significant imprint on my entire adult life.

Of all the tributes written about Reed so far, I found this initial coverage at The Village Voice to be some of the very best. After reading this blog (of course) it would be well worth your time to read the articles here at the Voice

The opportunity to cover a live show of Mr. Reed’s Metal Machine Trio presented itself in 2009, with that show review published shortly thereafter. Reprinted here is the original text, photos and videos from that night’s performance on April 23, 2009.

To say Lou Reed is a living legend is something of an understatement. He resides in that same stratosphere as Bob Dylan and David Bowie. The man created the Velvet Underground in the 1960s. That group has been the starting point of influence for so many bands in all the decades to follow, up to and including this very day.

Fans of Lou's solo work are also familiar with not just his traditional songcraft, but also his fascination with minimalism, ambient and repetitive music. This interest was revealed to the world when he released his album titled Metal Machine Music in 1975. A shocking stylistic change to his legion of fans at the time, he would state in interviews supporting the album that he had a long running admiration for the work of early-20th Century composer Erik Satie. 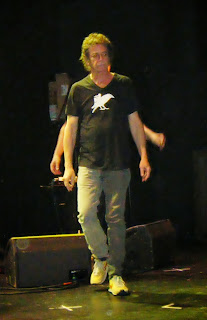 Metal Machine Music, the (then double-vinyl) album is essentially an hour's worth of pure guitar feedback. The sound effects from Reed's guitars and amps bounce off one another, rise and fall, producing a harsh and grating, but yet at times soothing rhythm. Amidst the noise and overtones, you can actually hear classical-style trills. Having owned this album for a few decades, it has been an infrequent listening experience designed only for special occasions. It's extreme "noise" content laid the groundwork for influential sound experimenters like early 1980's downtown New York pioneers Glen Branca and Rhys Chatham. Those two artists then influenced bands like Sonic Youth and My Bloody Valentine. This genre of sound design continues through to today. 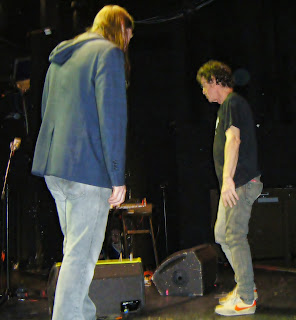 So, when it was announced that Lou Reed had put together a Metal Machine Trio and was bringing it to The Blender Theater at Gramercy, I was most curious to hear how this all had evolved. The trio - dubbed the MM3 - consisted of Lou Reed on processed and unprocessed guitars, Ulrich Krieger on tenor sax, and live-electronics, and Sarth Calhoun on live processing and something called "continuum".

The three artists took their positions at each of their respective equipment areas and Lou spoke briefly to the crowd. Thanking everyone for coming he introduced who the other two sonic collaborators were. Sarth Calhoun was positioned to the left, and stood infront of a bank of mysterious boxes which I presume were keyboards, but I did spot 2 laptops up there. To the far right of the stage was Ulrich, who played nothing but sax (although it was, at times run through so many effects and amps, that it frequently sounded nothing like a sax at all). Lou was in the center, surrounded by keyboards, effects devices and guitars. 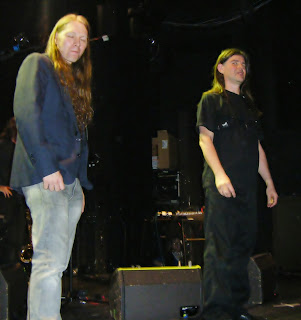 ﻿
The sonic artists started off with a slow building drone that carried a hissing like quality to it. There was a soundman perched high and above Lou's left side, that he would give hand signals to (to raise up certain members levels, all in live time). The piece continued to build with a sonic wash "whooshing" texture, as Lou stoicly twisted nobs on mysterious electronic devices perched directly in front of him. Ulrich contributed to the ominous early movement with deep squonks on his saxaphone. Lou's facial expressions throughout showed someone who was taking all of this very seriously. There has been much written about his original intensions as to why he released Metal Machine Music. How it was all a ruse and an elaborate joke he was pulling on the music industry. Based on his intense appearance here, one would have to question that position. What I saw was a man who was searching for sonic nirvana through harsh and pure improvisational sounds. Even in his Velvet Underground days, Reed has expressed his admiration for avant garde composer La Monte Young. Ulrich's tenor sax gave the overall presentation a more jazzy feel than the original guitar-and-amp only MMM. His squonks brought to mind what John Zorn has been doing on the downtown music scene for years. Although the promo for this show specifically stated "no vocals," Lou did in fact have a microphone in front of him. At points during this ever-evolving sonic wash, Lou would begin a type of "scat" singing. He made brief references to some of his most famous songs. Shouting over the din at one point "I'm a Coney Island baby," and at another he sang "standing on a corner". Initially finding this somewhat humorous, I considered the possibility of what he might mean by doing this. It's as if he was acknowledging his music catalogue and legacy, while at the same time completely deconstructing it.

About halfway through this lengthy piece, Lou turned to his guitars. Not moving from his seated position, and on Lou's signal, an attentive roadie/tech handed him his first guitar. His playing was surprisingly quite impressive. I always knew he played somewhat, but figured it was more basic chord progressions to help him write songs. Here though, he was playing sonic textures not unlike Robert Fripp. That's not to say he displayed Fripp's speed and dexterity (not many can), but Lou's ability to hold and bend sustained drone like notes showed a strikingly high level of musicianship. The piece moved on to a mellower plateau, where Reed played these ebbing guitar textures, that brought to mind Fripp and Eno's landmark collaborations "No Pussyfooting" and "Evening Star."

Later on in the performance (all still the same singular piece) Lou had the tech take his first guitar away and hand him another. This one had a distinctively harder sound and Reed played it altogether differently as well. The sound was more hard rock and had a distored edge to it. Lou riffed it in a more "metal guitar" style while Ulrich provided a bass like bottom rhythm with his sax. There were moments throughout the lengthy performance piece where one might liken the harsher and more dissonant passages to the equivalent of an aural root canal.

This one continuous piece began a little before 9 pm and ended just after 10. Over an hour in length, it was like nothing I've ever experienced before in a live environment.

After the audience of mostly well healed, middle aged patrons continued their applause and hope for an encore, Mr. Reed and his fellow artists came back on stage. They then proceeded to do another, shorter approximately 12 minute piece, that was quieter and moodier in overall feel, while still keeping true to what just went on before it.

As Lou and his fellow bandmates took their bows at the front of the stage, a number of us pushed closer to take better photos. Lou then began shaking hands with some of the people in front. Moving closer myself, I stuck out my hand and Lou grasped it momentarily. 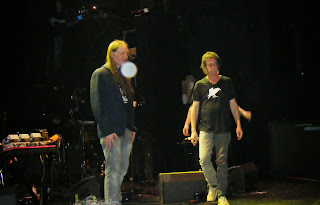 I shook Lou Reed’s hand. Such a brief encounter, but one I’ll always remember.

You left us too soon, Lou.