One band I had been most anxious to see again, (since first accidentally stumbled across them) are the glorious She Keeps Bees. Back in October, I attended a show specifically to see another band (Philadephia's East Hundred - who are awesome in their own right). My thoughts from that show on both bands on that particular night can be found here: 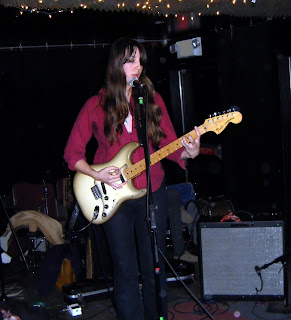 Along with loving the East Hundred show, I was completely blown away by the opening act - She Keeps Bees. Just a 2 person band, they are fronted by manic and charismatic vocalist/guitarist Jessica Larabee. Her last name there is how she explains the name of the band. She also keeps the whole "bee" thing going by having a really cool "bees" tatoo on her arm. But, all that aside, it is the music here that hooks you in.

Give a listen here to their song "Wear Red" - performed here at this show: 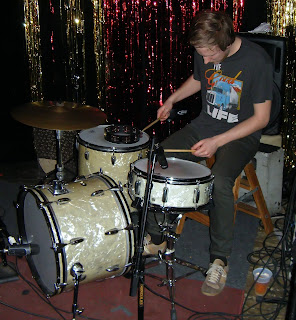 On drums is Jessica's co-conspirator Andy Laplant. In addition to providing the essential percussive aspects of these songs, Andy also engineered the bands current album "Nests" 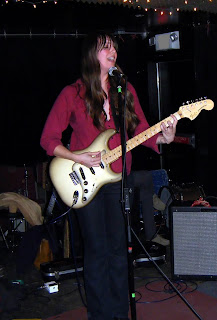 Jessica is such a down-to-earth, no pretention, no BS vocalist and guitar player. It's quite refreshing to see someone like this exist - especially in this day and age of every-move-calcuated performers. With Jess you can immediately tell everything she does is all about "feel". There is no sense of image perception, or 'how will this play to the audience?' It's all from the gut.

Listen in as she and Andy crush out another modern day blues ode: 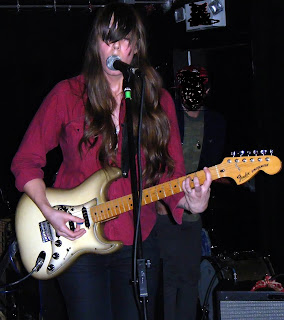 Jess is naturally attractive - pretty. She doesn't appear to wear any makeup and her very long hair hangs in her face. She peeks through the fringe. She's tall and slinky. Add to that a great personality - one that is parts manic, humble, sweet and soulful and it's hard not to be captivated. 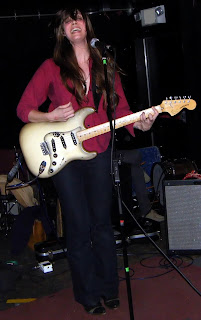 Here Jessica and Andy play "You Can Tell".

Jessica sings "Give me one good reason. You need someone to blame. Well, I'm the one to blame" 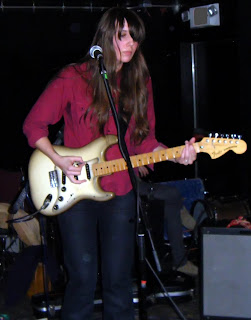 And there's good reason why. It's just such a great chord progression and primal drumming. Lot's of "whoha, whoah" wailing and chunky guitar strumming. 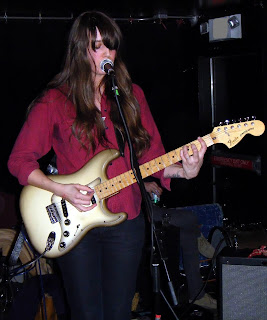 It's interesting to note that Jessica started out as a drummer. Her father was something of an accomplished percussionist himself and taught Jess to play when she was 14. That sense of rhythm is apparent in the way she plays guitar. And yet a completely competent and natural guitar player she is. The sound she gets out of it and her amp is dirty and gritty. Combine that with her rich, powerful voice and you have the makings of a modern day blues vehicle. 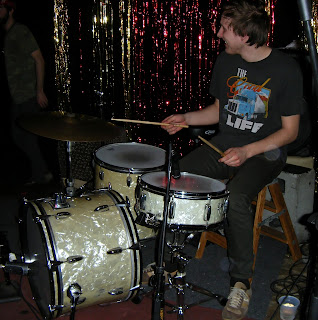 Andy and Jessica are so locked in together. Though their performances come off somewhat loose and casual, you get the sense they could finish each other's musical sentences.

Jessica slightly freaks out a bit in her amusing and charming way at the beginning of one song (this isn't that unusual of an occurrence) - then leads everyone through the hand-clap, drums & vocals only song "Ribbon". 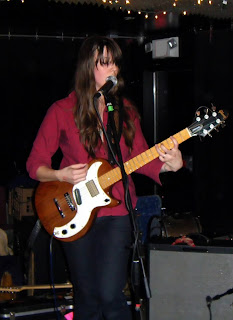 As she had broken a string off her own guitar, Jessica had to borrow one from one of the opening bands to continue the set.

After Andy helped her "dirty" up the sound a bit (as Jess was overheard saying to him - "how do we make this sound awesome?") and some more pre-song amusing chatter (where one fan simply shouts out "make that shit rock!") - she smiled and got down to business.
http://www.youtube.com/watch?v=OH9Q4VgW4cs 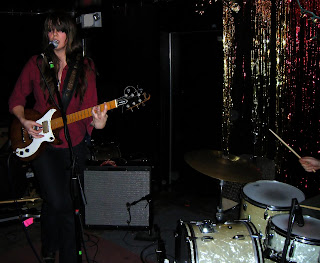 With "new" guitar and drum-stick directive. 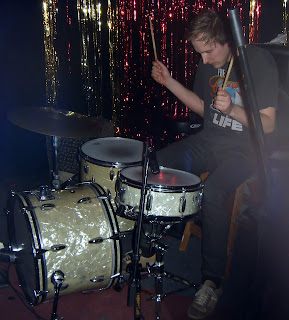 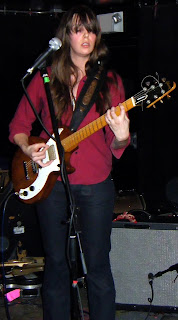 Jess has got soul - and she's superbad. I caught up with the band after the show and asked a few questions.
Jessica responds on her music:

"It's definitely more of a percussive thing in my head. I'm self-taught so it's not like I listen to something and can pick out exactly what it is. It's been a progression to get this sort of aggressive sound. Before I played a folkier style. I was trying for a some kind of sound, and I wasn't thinking about what made my own connection to it all. I was trying (too hard) to sound like somebody else - so it wasn't until I met Andy - and I taught him drums - then he started getting into it - and it progressed into this more aggresive thing. This led to an awakeing and release in me, and helped to embrace what was coming. That's how "Nests" was written - me just having songs and then recording them immediately after.
The first album wasn't done like that. I had been singing those song for 2 years before they were recorded." 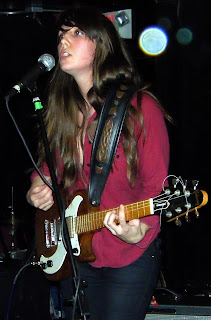 Jessica is completely locked-in to the moment - once the song begins.
"We're leaving for Europe on June 3, so I'm super excited about that," she continued. "We have a few festivals lined up and our label over there (NAMES) is going to be putting our record out. We just found out about a festival in Croatia that we're doing at the end of August, and we're so excited about it."
Andy: "Croatia is very beautiful. I've been there once before. We're going to a tiny fishing village."
Jessica: "This village is 900 years old."
Andy: "but we'll be basing our operations out of England, though." 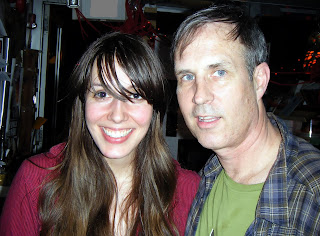 I wouldn't be Dave Cromwell if I didn't get my picture with my new very fave singer of all time (at that moment). But - yeah - I am thrilled that awesome Jessica is sweet, friendly and not on any star trip. I don't even think huge success would change that about her.
As they have stated, the band will be embarking on a tour of Europe from June - September, so there will be more than a few opportunities for our friends accross-the-pond to catch this exciting live show.
Important links for She Keeps Bees:
http://www.myspace.com/shekeepsbees
http://www.shekeepsbees.com/ww.shekeepsbees.com/

Their latest album titled "Nests" can be gotten at Other Music
http://digital.othermusic.com/search/full.php?UID=305911/
Posted by DaveCromwell at 4:53 PM 6 comments: