With the New Year comes a fresh crop of album and single releases that promise additional full-length recordings in the coming days. While this current output represents just (or soon to be) released material, most of these artists have been developing their individual style for a number of years now. Featured on indie labels with consistent track records, the first month of 2022 finds this site digging in to a variety of creative songwriters and sound designers. 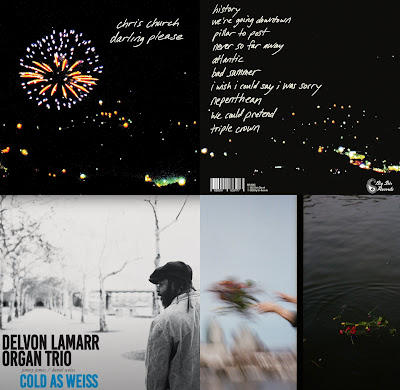 Frequent contributors to this site Big Stir Records has rolled-out their first major album release of 2022: “Darling Please” from acclaimed North Carolina singer-songwriter Chris Church.  A remastered version of songs recorded eleven years ago, the tracks are re-imagined with the assistance of studio wizard Nick Bertling and benefit from newly tracked backing vocals by Lindsay Murray of Gretchen's Wheel. Originally recorded in the artists basement studio, it is dedicated to his late brother Mike Church, who passed prior to the start of this project. Mike played drums on most of Chris's earlier music. 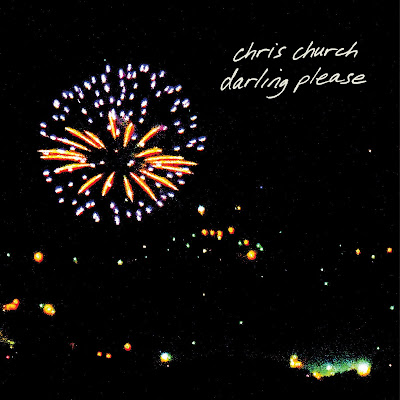 A chiming clarion introduces opening cut “History” before lurching into a slow-buring groove driven by hard-edged guitars. The distinctive vocals come on passionate and forceful, with the entire presentation (instruments and voices) reflecting an early 70's vibe. A bit of The Byrds and Poco (Timothy B Schmidt's pre-Eagles band) wrapped up in the overall feel. Coming in at a relatively brief 2:42, the main body actually ends sooner – allowing for :30 seconds or so of fadeout panning. Follow-up track “We're Going Downtown” is punchier right out of the box, with power chords and snare drum locked in for maximum emphasis. Bass guitar moves up to drive the verses along, with that ever-present steady snare drum and measured power chords filling out the sonics. A catchy chorus dabbles in near-pop-like hooks, putting emphasis on repeated lyrics (“this world”). Points for rhyming “ashes” with “I wonder where my cash is.” 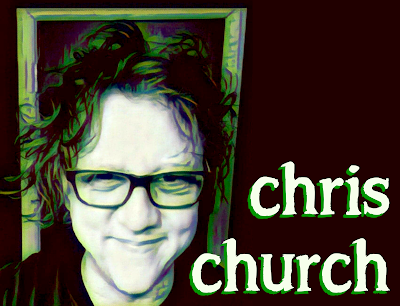 “Pillar to Post” doubles down on the wall-of-guitars sound while planting both feet firmly in the Americana rock that evolved out of the southeastern states of Georgia, Tennessee and the Carolina's. Mitch Easter's work with Let's Active (as well as R.E.M early producer) and a bit of The Box Tops come to mind while listening to this late 60's to early 90's hybrid track. “Feel like running away – even today” provides an emotional hook we can all occasionally relate to.  Additional credit for the blistering guitar solo fadeout on the cuts final :40 seconds. “Never So Far Away” makes effective use of vocal layering within the context of guitar-heavy song, emphasizing harmonies over rudimentary doubling. While bass guitar and drums ground the progression with determined precision, voices and guitars float above that base 10CC-like shimmer. An elastic guitar figure appears midway through, providing another sonic element for the shifting rhythmic patterns underneath. “When the light glistens – listen to the shadows. It's a dream, it's a feeling – and your reeling in the afterglow.  And there's nothing anybody can say – one step closer” establishes the lyrical focal point of earthly loss and the promise of something more beyond that. 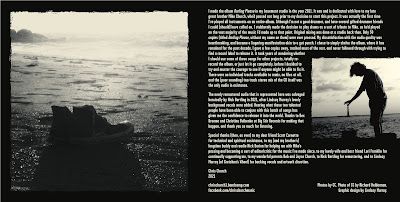 Fifth entry “Atlantic” benefits from the shadow harmony vocals of Lindsay Murray (who also designed the album's sleeve art), adding a depth and sheen reminiscent of Emmy Lou Harris and Linda Rondstadt's guest contributions to 70's era western-rock heavyweights like The Eagles and The Flying Burrito Brothers. Chris and Lindsay's voices blend seamlessly, creating a heart-tugging element on evolving lyrical content with hooks like “were colder now,” “you were never mine to keep,” “and it goes (on spinning like a ferris wheel).”  Reaching the album's first designated focus track single “Bad Summer” finds a rising ambient intro paving the way for this mid-tempo rocker. Lindsay returns to harmonize on the bubbly hook-hold chorus that goes “bad summer wish I could forget it. As soon as we met we started heading for the wall. Bad summer to fall.” A wall-of-guitars flood all available ambient space, while somehow leaving room for a basic drum and bass rhythm section. Half way in to this five minute (and the album's longest) track is a lovely change section stating “it could have been a love so safe and warm – shelter from the storm that came to pass.” Chris even manages to amusingly work in “kiss my ass” and "pisses me off” in this section. 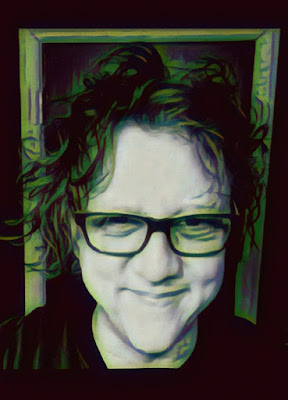 “I Wish I Could Say I Was Sorry” adds string-and-flute synthesizers as an introductory element to an emerging chunky Americana rocker. Sinewy Tom Petty style riffs play inside a busy bass guitar pattern and steady drum beat. “Now I can see – mistakes that I may have made casually” serves as the featured hook, once again augmented by Lindsay Murray's tandem harmonies.  “Nepenthean” adds treated piano notes as a method of piercing through an overall guitar-heavy stoner-rock progression. Soaring vocals feature prominently here, on this song of forgetfulness as it relates to sorrow or trouble. “We Could Pretend” leans on deeper low-end tones for melody and rhythmic propulsion while focusing on a clearer vocal presentation. There's a melancholy longing embeded in both the chords and lyrical recitation.  Final track “Triple Crown” features Church laying down an easy groove drum backbeat as a final tribute statement to his brother. Bright slide guitar riffs and penetrating piano notes swirl around a dramatic progression, capped off by dynamic power chords creating a sonic equivalent to the fireworks displayed on the albums cover. 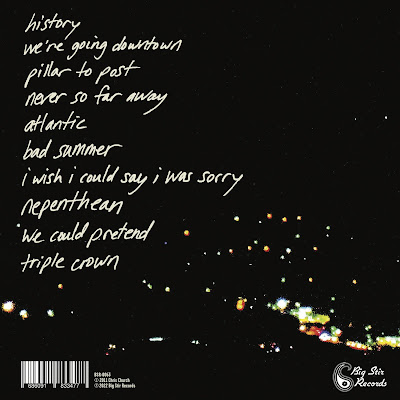 The record is out on CD and digital January 21 and features the lead single “Bad Summer”. You can preorder now at www.bigstirrecords.com, www.bigstirrecords.bandcamp.com, and on sale everywhere music is sold or streamed on the release date.
*  *  *  *  *
Along with the lyric-heavy vocal music frequently reviewed here, this site has also made it a point over the years to feature quality instrumental music. Having been tipped to the Delvon Lamarr Organ Trio this past year, it is welcome news about a new track out now, with full-length album release on the way. The Seattle-based soul-jazz groove machine have recently released “Don't Worry 'Bout What I Do,” the second single from their upcoming album Cold As Weiss (out February 11, 2022 via Colemine Records). 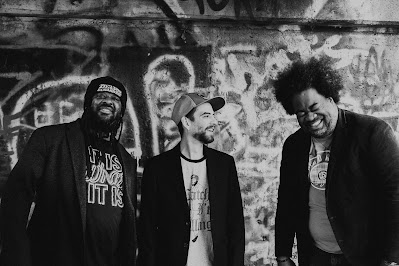 This track (and overall album) is the band’s first release featuring new drummer Dan Weiss, also of the powerhouse soul and funk collective The Sextones. A natural fit for the Delvon Lamarr Organ Trio's groove-oriented rhythms, Dan’s chops-in-the-pocket drumming locks in the trio’s intuitive chemistry. The bands original lineup is completed by founding members Delvon Lamarr on organ and Jimmy James on guitar. 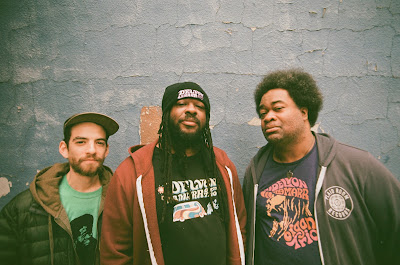 Recently dropped single “Don't Worry 'Bout What I Do” glides right out of the gate with guitar and organ laying down a tandem chord progression that resolves on a rising accent. The drums are initially lean and precise, favoring high-hat, snare and bass drum for a clean rhythmic pulse. Guitar breaks out first, establishing a melody line of hard-edged notes while organ playfully pumps around the open spaces. On the surface it's all quite funky, however touches of Brian Auger's hammond organ jazz-fusion ensemble The Oblivion Express can be felt. A minute in on this five minute track introduces the first change, where extended organ chords are held against rising guitar figures and percussive accents complete the turnaround. 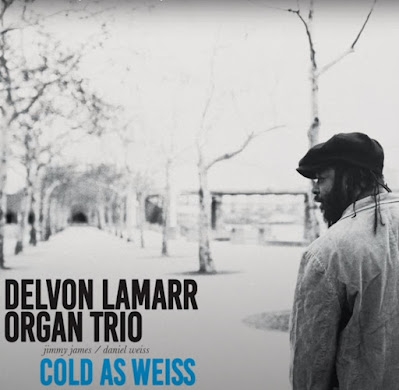 Returning to the original progression, the guitar begins to alter the overriding progression in a variety of subtle ways. While staying true to the original melody, notes are now bended and held out longer for maximum creative effect. A busier level of improvised, controlled soloing emerges, with more active drumming adding press-rolls and bolder cymbal work underneath. Jimmy James takes inspiration from Steve Cropper's Booker T. & the M.G's rhythmic stylings and expands that further into acid-rock leads. The song title itself comes from James' often repeated response to some critique, “man... don't worry ‘bout what I do” (which is usually followed by – or implied - “just worry about yourself”). 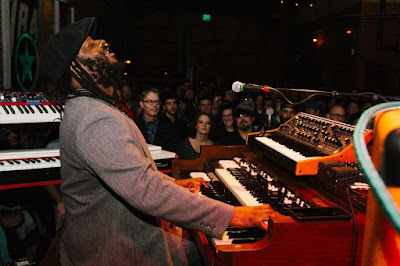 Pursuing a style of “feel good music,” Delvon Lamarr is a self-taught virtuoso musician, using his perfect pitch to learn jazz and play a number of different instruments. Founded by Larmarr’s wife and manager Amy Novo, the trio started from modest beginnings in 2015, but since then has released two Billboard charting albums and toured the world to sold out venues.
Check out this latest track here:
In addition to the new single and coming album release, the band has a number of tour dates on tap:
02/04/22: Seattle, WA - The Crocodile
02/06/22: Eugene, OR - Hult Center
02/09/22: Santa Cruz, CA - Moe’s Alley
02/11/22: Album Release Day Live Stream
Find out more about DLO3 via these links:
Website  -  Facebook  -  Instagram
*  *  *  *  *
Trusted source Good Eye Records has introduced an exciting new track "Boscobel," which is the first single from new to this site band Sooner's debut album, Days and Nights. As is the case with so many artists these days, pandemic delays held things back before it's ultimate appearance now. Sooner specializes in blending alternative rock, dream pop and gaze with romantic female lead vocals. 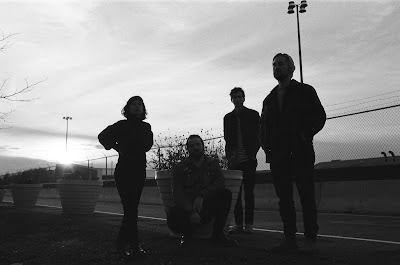 The track emerges out of a hazy, distant ambience, before familiar churning gaze guitars hold a singular chord with definitive purpose. Ethereal female vocals commence in tandem with deep toms drumming and pulsing bass guitar. With changing chords now marking out the progression, a less distorted guitar plateau is arrived at just under the 1 minute mark. Percussive toms create movement underneath, and those sweet female vocals evoke the combined charm of Harriet Wheeler of the legendary Sundays and lesser know (but equally brilliant) Caroline Crawley of Shelleyan Orphan. 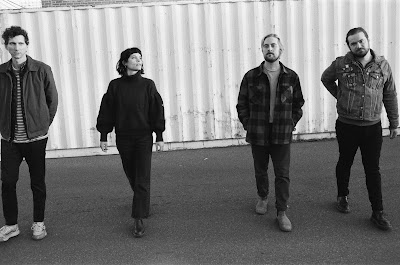 The guitar chords shimmer more now, with forays into minor keys adding a gorgeous melancholy feel to it all. There's a passion and beauty to the vocals that benefit from occasional pulling back of the more aggressive instrumentation with a softer approach on the guitars. When more forceful “gaze” guitars re-emerge, the light-to-heavy contrast packs a decidedly fervent punch.  As the churning-gaze guitars and bass lock in to a rising progression, adding tambourine percussion to the mix creates an MBV/Slowdive perception still so popular among the acolytes of those bands. What uniquely stands out is the passionate vocal delivery here, diverging from the more understated Butcher/Goswell model. Also impressive is how the three primary instruments – guitar, bass and drums are all clearly defined in the mix, which allows for a series of punchy rhythmic accents to propel everything forward.
Check out this dazzling track here:
Sooner's Debut LP, Days and Nights will be out in full on March 25th.
*  *  *  *  *
Posted by DaveCromwell at 7:30 AM 22 comments: