The Lovetones kicked off a US tour in support of their recently released album Dimensions with back to back shows in New York. Hailing from Australia, the Planting Seeds Records recording artists played Friday, May 1, 2009 at Pianos in Manhattan, and the following night at Cameo in Brooklyn. 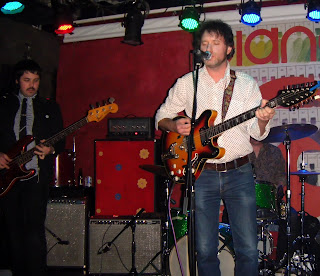 The core of the band consists of frontman/vocalist/guitarist and songwriter Matthew J. Tow.
A second Matthew - Sigley plays bass, keyboards and provides vocal harmonies as well as an occasional lead vocal. 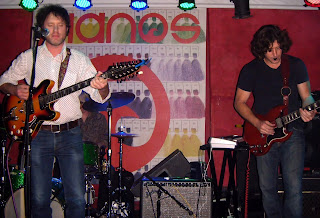 For the purposes of this tour, the band enlisted the help of Rob Campanella on second guitar and keyboards. Rob is a talented musician who has also played with the Brian Jonestown Massacre, his own band Quarter After, as well as mixing and co-producing The Lovetones latest album. 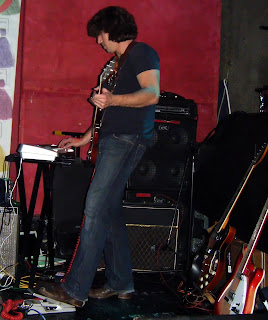 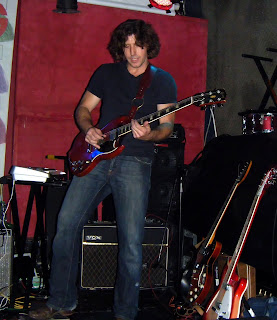 While adding guitar depth throughout the set.

Completing the quartet most capably on drums was Nelson Bragg,
who's road chops include time in legendary Beach Boy Brian Wilson's band. 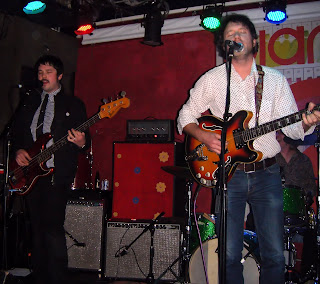 Enough can't be said about the incredible harmonies the two principal members of the band engaged in throughout the show. With Matthew J. Tow's central, mid-range timbre, Matt Sigley would provide these perfect high tones that added an overall shimmer to the vocals. 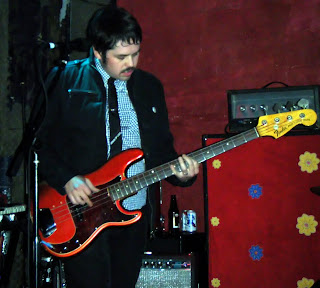 Matthew Sigley is equally a most sophisticated bass player. His fingerwork and overall high-level of playing ability was a pleasure to witness. 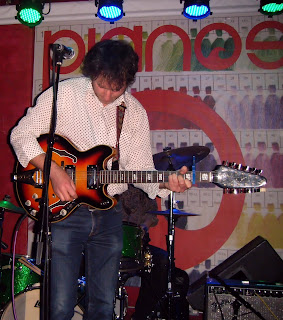 Matthew J. Tow played this mysterious and wondeful sounding 12-string Vox Ultrasonic guitar. I leared from a fellow-blogger I met at the show that this was indeed something of a rare instrument. 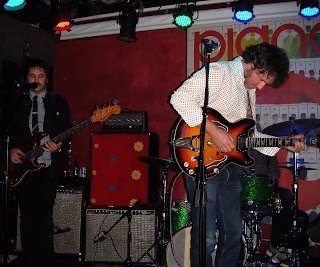 However, it was the jams that really drove it all home for me.
Check this video clip out, and see what I mean:
http://www.youtube.com/watch?v=3VJ3wCgeAEM 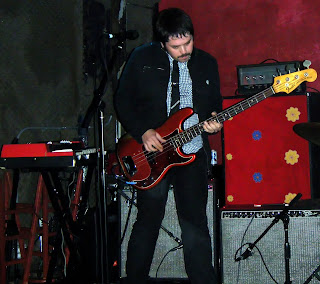 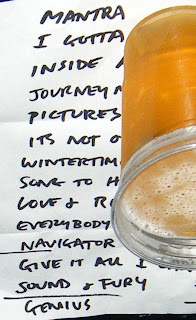 The show's set list. Shot "blogger syle" (upside down on the stage - with a thirst-quenching beverage perched on top). 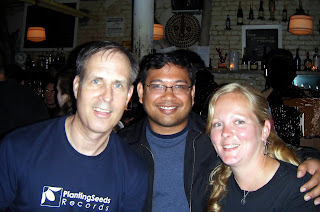 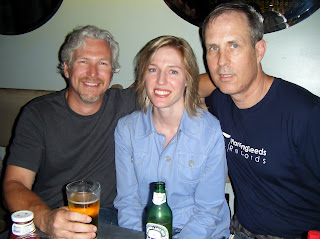 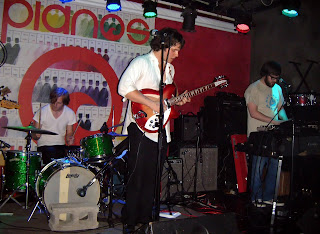 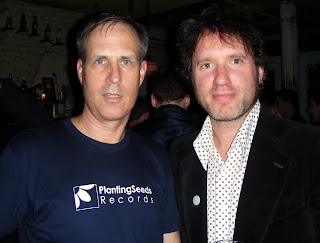 Getting a chance to chat with Matthew J. Tow at the venue.
Saturday night brought us over to Williamsburg, Brooklyn. 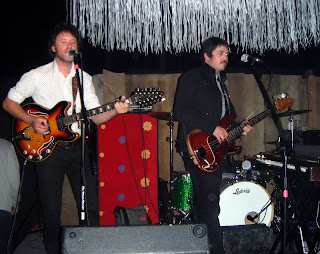 The venue was this interesting art space / back bar / stage called Cameo,
located in the back of a cafe/restaurant called The Lovin Cup Cafe. 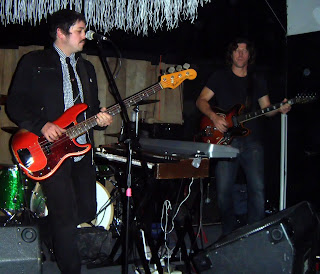 Hovering over the stage like a giant pulsing sea creature was this incredibly unique piece of art sculpture. Quite simple in design, it actually served as a visual amplification source for the show's lighting. It reflected all the colors being projected on it, and made for something of a most unique and stimulating light show. 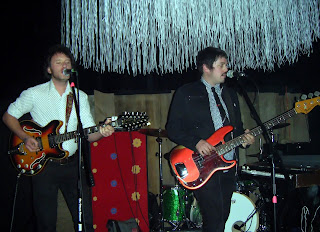 It gave the vibe of one of those Wharholian loft performances the Velvet Underground played around New York in the late 1960's. 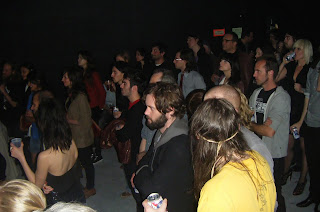 The tightly packed, enthusiastic crowd were grooving out to jams and jingle. 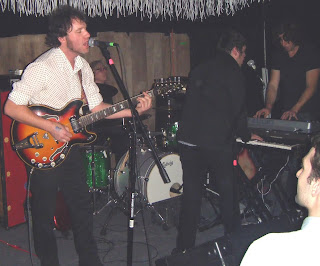 On this night, the band would take their jams even higher.
Witness the improvisational greatness as they take the psychedelic trip further still - all under a pulsing, undulating, shimmering art sculpture light show. Of note, Matthew Sigley's manic keyboard work.
http://www.youtube.com/watch?v=ZFocx75itRo 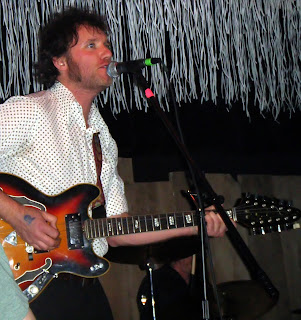 Matt Tow's vocals, songwriting and guitar playing shows depth and maturity. There is an acknowledgment and reverence for the classic 60's era music - while at the same time, a creative desire to push it past those initial boundaries. 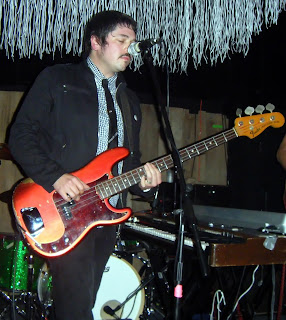 Matt Sigley's bass playing is sophisticated without ever being intrusive or too busy. 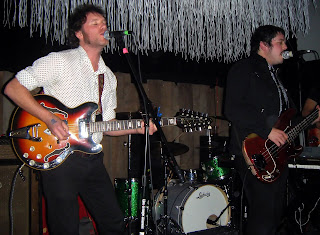 The show had been building progressively throughout the set - becoming more intense and energy charged. Inspired by the responsive and raucous crowd, Matthew Tow charged into the audience while still playing his guitar for the shows final song. It was a surreal experience as he swung his wireless guitar around, still very much live - and started handing it to random people to chime its strings.
Check out the video evidence of this:
http://www.youtube.com/watch?v=2HdCXz_MiPk
It was a true edgy rock & roll moment!
The Lovetones are a unique blend of traditional, structured, song-based music - combined with frequent sonic forays into extended tripped-out jams. It's an intriguing mix worth checking out. 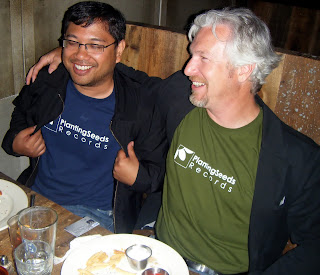 The Planting Seeds braintrust - Neil and William.
Corporate charge card at the ready.

Nice, Dave!!! LOVE the photos, and love that you posted tons of them. AND, so glad to see that Cameo brought out more people to see them! I was a bit disappointed at how few fans turned up at Pianos. But then again, no one was in my way of seeing the band ;-)

Thanks for YOUR comment, Dave!! I wrote my little fan-girl review, haha! Just kidding, I am very professional when I write reviews! I posted the real review & will post a review for the FABULOUS Young Sinclairs tomorrow. Peace, Terri

i like this. that was something, that was easy to read. :)
about the band... this is a band - i would never buy or listen their records. why, cause a band like this sounds better when they play live. :) and the composition on linked video is very suitable for movie sound track i think...
in conclusion:
article - really good, not boring, easy to read (for lazy person like me). :)
band - nice if i hear the music and i am able to visualize something it is - good, and this time it happen.
feel the free. ;)

With Williams new haircut, he looks like he belongs on the $20 bill.

Watched the videos you posted last night. Excellent!! Super quality. I think I'll be watching those a LOT :-)

I'm glad you included the myspace link at the bottom because I heard no evidence of song structure in those clips, which all began "in progress." Then again, this was a couple of musical performances, not a crime scene or scientific inquiry. But it's hard for me to appreciate a jam when I can't know what it was based on, and hence, how it evolved into what it became.

The band's music is really cool. I like their sound- it's very "moody", really atmospheric. The vocals are like some kind of darker version of The Beatles or something. Cool writing and loads of lovely pictures. Great job.