On the way out of the club Red 7, I was encouraged by an attractive young woman to check out the new Sony Tablets that are now available.  Not wanting to appear dismissive, I figured it was worth spending a few minutes to see what the hoopla was all about. 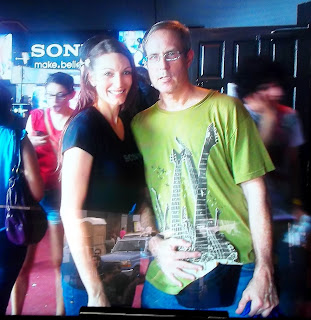 This image is actually projected up on a big wall screen

Heading down to the Austin Convention Center, it was time to check out some of the ongoing exhibits. 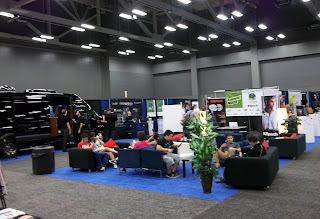 People chilling out on couches, perusing the various attractions to be found. 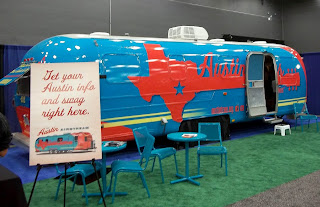 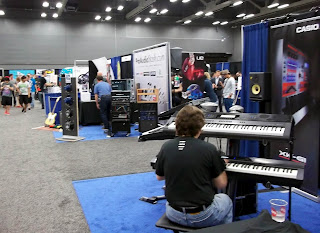 The gear expo was particularly entertaining.  You could try out a wide variety of instruments on display.

As I headed back to the center of town, another woman seemed to be drawing a bit of a crowd.  She encouraged those around to snap a few photos.  Well, it would have been rude of me not to. 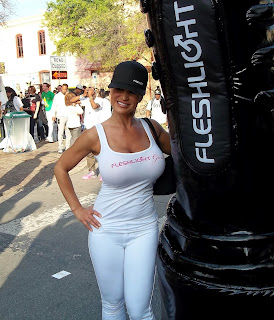 Between show diversions over, it was time to head over to the Audio Perv Purveyors showcase at the cheekily named Peckerheads for another shredtastic Ume show! 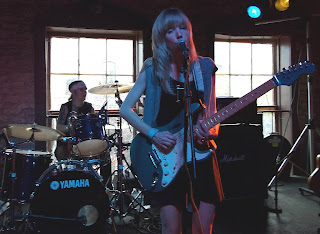 No from-behind-view this time, it was front and center for Lauren and this amazing band. 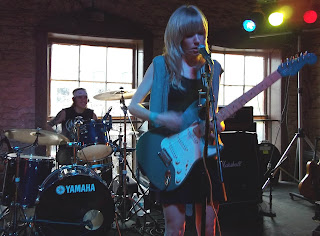 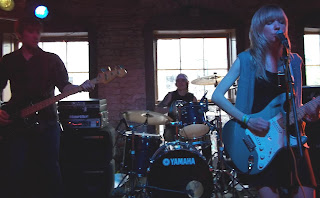 The band was firing on all cylinders right from the very first note. 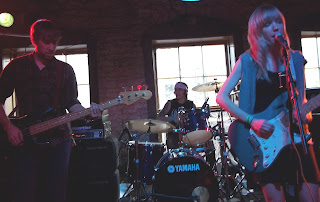 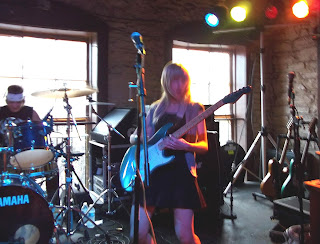 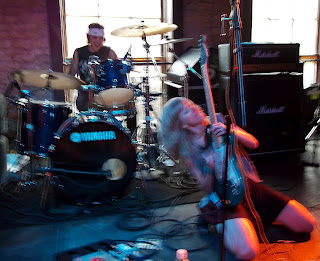 Lauren moves around so fast, that freezing a single frame without a flash is nearly impossible. 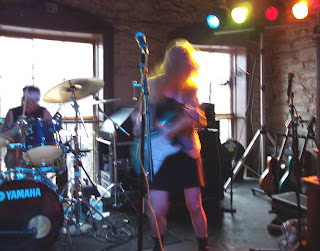 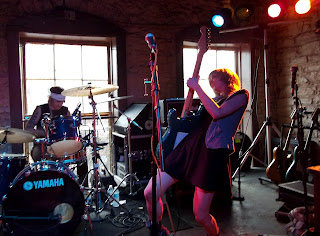 It is truly a wondrous sound that this band produces. 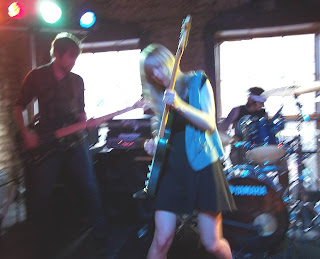 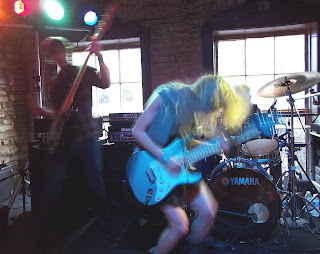 Check out their latest album Phantoms

One of the great side activities of SXSW is all the meetups you try to arrange.  Usually done via text (since you are in a loud venue) I made arrangements with fellow music lover Dale - who I got to know on the MOG music site.  We had preplanned to assist each other with sharing information about all the best shows.  Of course I told him about this one. 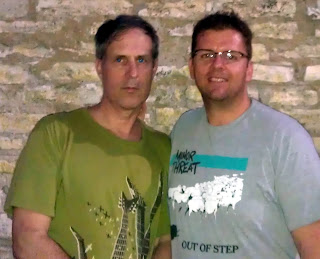 Dale and I plot out the night's further activites 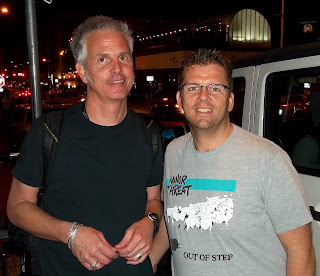 We caught up with RD for a spirited chat, before he headed off to venues of importance to him.

Dale and I headed onward toward our own quest. 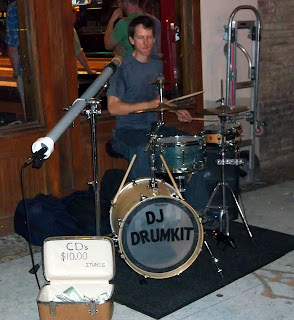 Along the way we came across some amazing street activity. 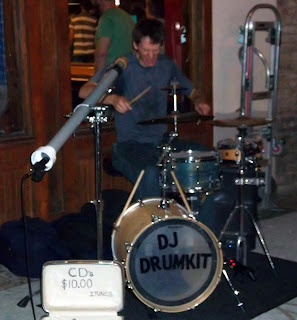 Coming across this sort of accidental musical sideshow find was an all too common occurrence.

Popping into the venue, we learned it would be about an hour or so before they would play.

As we were leaving, the bands second guitarist - Jaclyn Slimm spotted me and came out to greet us. 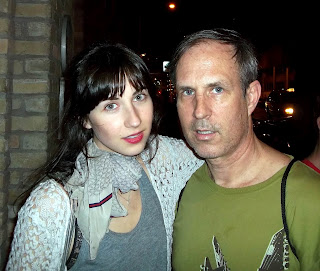 Jackie and I had met the previous October when I was assigned by The Deli Magazine to interview the band - and cover their CMJ show.  We snapped a quick photo to document this moment in time. 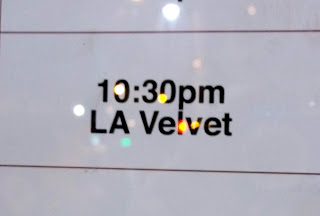 Back out on the street, we noticed an interesting looking band was mid set,and took a few moments to check them out. 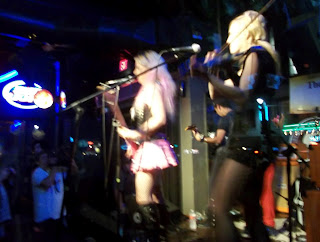 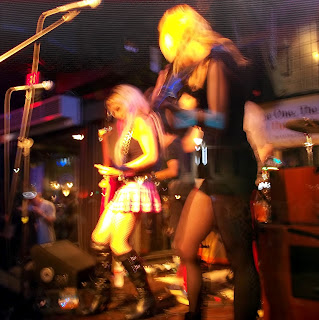 We found this particular brand of theatrical rock to be more than adequate time spent. 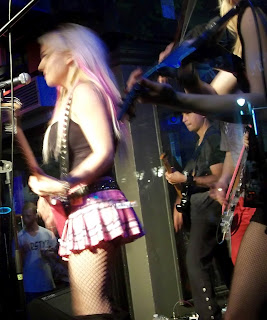 But now it was time for Mahogany's official SXSW showcase

Jaclyn presents a most stylish figure on stage 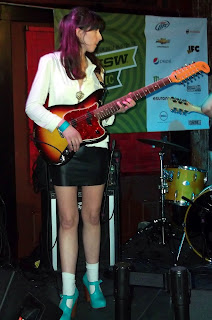 Additionally, the guitar she plays delivers a sonic and visual appeal of equal quality. 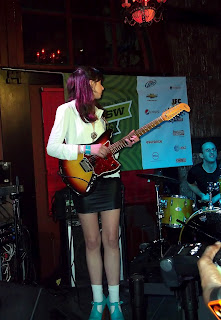 Live drumming made this performance quite different than the CMJ show I witness previously. That former show relied more on electronic enhancement, as frontman Andrew would explain to me when we chatted after the show. A dreamy image that evokes Belinda of My Bloody Valentine

For images of Andrew, Khaya and the rest of the band, see here:

The band has asked for a ‘slow reveal’ of forthcoming material and events — connect with Mahogany on YouTube, Twitter, Instagram (Mahogany_Band) and Facebook to keep abreast of the latest.
Posted by DaveCromwell at 10:06 PM

The Austin Convention Center looks interesting :) And it must've been great to see all these artists on the street playing music!

Another interesting installment- glad to see you managed to get around to the various exhibits haha, did she give you a free demo of the fleshlight hahaha- and i remember the ol mog days- i think we were friends on there, i wrote some blog or mog about scott walker and it was a blog of the day and i was excited hahaa

Anouk, the Convention Center became my phone battery recharging stop at least once a day.

Will, the funny thing is - I overheard some dude having to explain to his girlfriend just what the "fleshlight" was for ;-)

MOG is still rocking along by the way.

it wont let me on mog cos of all the music streaming....

not from behind.... :D
this like an awesome day.
will there be any videos from austin?:) you know i like them and we all curious. ;)

Yes, I do have videos, from my time there, Mr. Smork. A few you may have already seen up on Facebook. Shot with my HTC Sensation (just as you had suggested). Others are waiting to be uploaded. All will be revealed over time.

Great photos here, Dave. It's good to know that you're going to post some videos as well- it would be great to see them. Keep up the great work.

well. i think i "delicately" stated what i am waiting most. :)
and interviews as well. :)
keep those things coming as i'm hooked up with that. ;)

Amazing photos Dave! I love the blue bus! Seems that was really cool... You could "Move to the music"...as always :)

Nice to see the requests for videos from the shows. Yes, I have a number of them. Uploading those take a bit more time, so that's why I'm focusing on the photos and a bit of descriptive text first.

I want to ride in that blue bus too!

Glad to hear you like the photos, Ivanka. Would you care to join Paty and I for a cross-country ride on the blue bus? ;-)

Reading about your day was vicarious fun for me. Now I'm off to listen to some of this Mahogany group's songs.

"Vicarious fun" is much better that "sub-zero fun" I always say, Spike.