After exploring various corners of the town in between day and evening shows, it was time to head over to The Deli Magazine Un/Off Party at The Gypsy Lounge 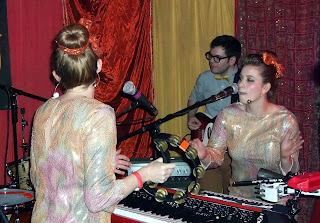 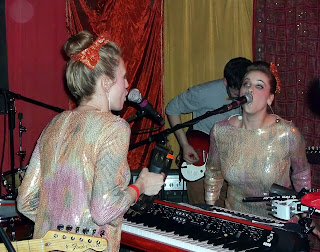 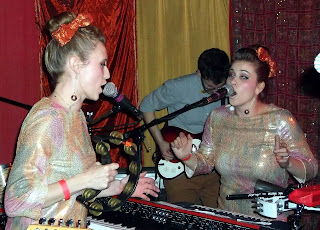 The rest of the band members supporting them play with a professional skill and confidence that add up to nothing less than an enjoyable listening experience.

As most SXSW sets are of the somewhat abbreviated length (usually about 30 minutes) the changeovers come quickly, as audiences shuffle out allowing the next group to take its place. 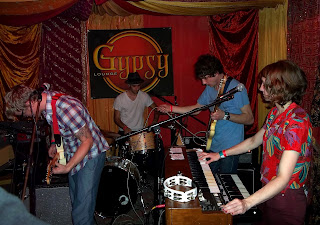 Next up was pacific northwestern act Radiation City 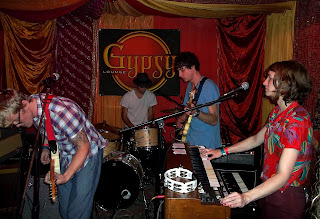 This group also had a two female, three dude component to their makeup. 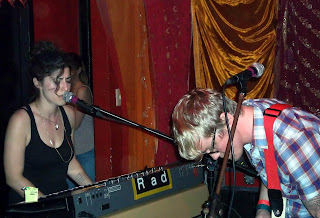 As vocally appealing as the band on just before them, the sonic qualities of the songs and instrumental delivery were sophisticated and rocked a bit harder. 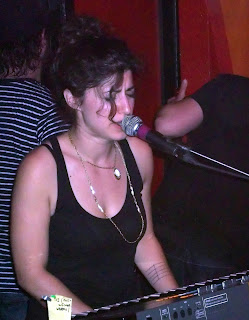 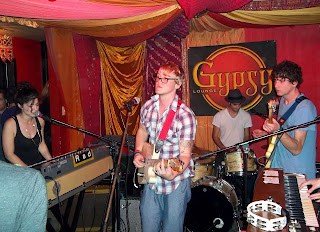 It was somewhat tight quarters there in the front room of The Gypsy Lounge, making for an intimate viewing and listening experience.

Set concluded, I wandered into the back room - which was bigger and had a larger stage.  There I stopped at the swag/merch table to peruse all on display. 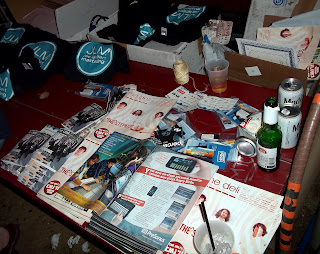 Copies of recent Deli Mag issues available to be had (with many features inside written by yours truly) graced the table.  I also had a great chat with the owner and namesake of Joe Lambert Mastering.  The very popular free t-shirt was being made available, thereby simplifying my very important attire selection for the next day.

Following that interlude - and over back n the inside stage was a talented, beautiful voiced folk singer named Madi Diaz 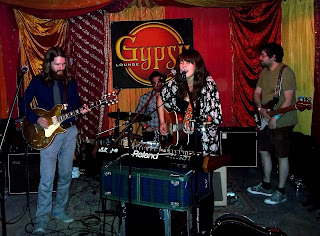 I was quite impressed with the sound she and her band was presenting. 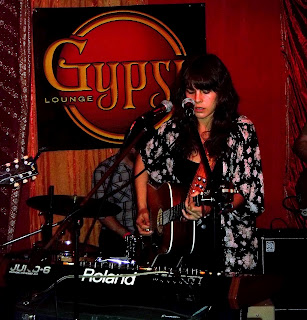 Madi sang through two microphones - one assumes set to different effects - creating a much fuller sound. 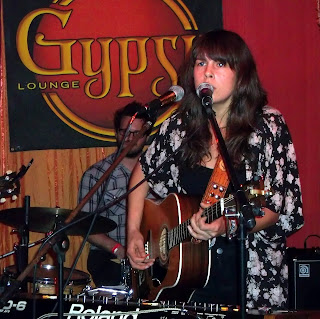 I was pleasantly surprised with this discovery and look forward to checking out more of her music. 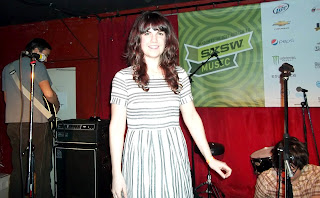 One of my top pick alternative pop albums of the year, they present a sweet image that is hard to resist.


Finally it was time to hightail it over to The Belmont  for the most anticipated show of the week. 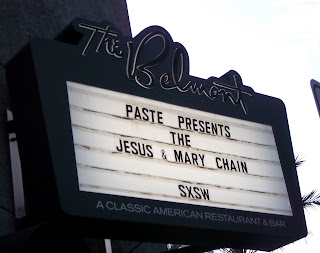 The Marquee doesn't lie - the boys are here in Austin 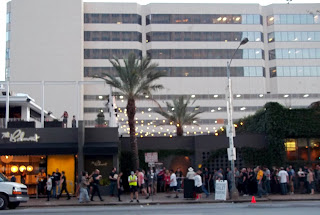 A quick shot from across the street shows the level of interest is quite high.

After too many opening acts than anyone should have to endure, the most influential band of the late 80's and most of the 90's were at last performing live once again. Seeing them onstage again after their last appearance five years ago was as thrilling as ever.  Now with the multi-talented John Moore on second guitar, the band hit the ground running with a blistering rendition of opening number "Snakedriver"

Jim Reid still "won't roll his bones of every little girl who gets on down" - an admirable quality to be sure. 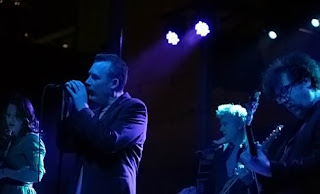 The show they delivered was a 70 minute tour-de-force of all their greatest songs.  As had been their practice in recent times, they brought a guest female vocalist on stage to do "Just Like Honey" with them. 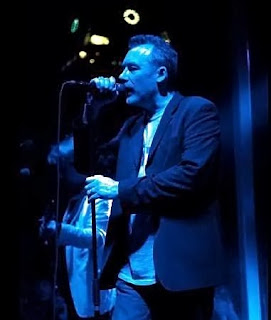 Jim still has that presence as a frontman that cannot be denied.  A great vocalist, his dry wit and amusingly slightly abrasive asides (often directed at his brother) are just as sharp as they've ever been. 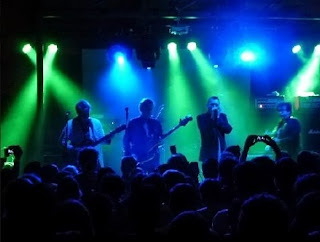 Phil King once again more than capably handled the bass guitar and some background vocal duties. 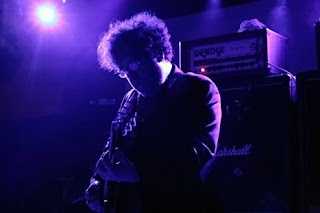 Of course, there is William.  The eccentric genius.  The man responsible for so many of these great songs.  He is an enigmatic figure these days, but one thing cannot be denied - the pure brilliance and influential reach of his songwriting. John, Jim and Phil show how a big time rock show should be presented. 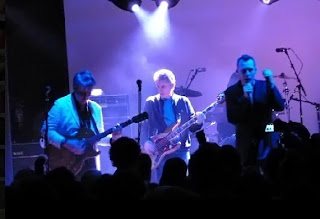 Bathed in blue lights, the boys had their crowd hanging on every classic note. 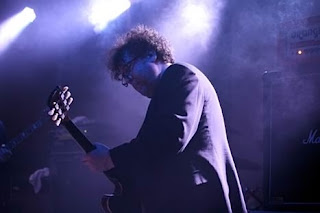 William prodded some of the most glorious squeals, squalls, feedback and otherwise notoriously rude sounds of out of his guitar - much to the delight of an adoring audience.  Of particular note was an abrasively delightful rendition of "Reverence" 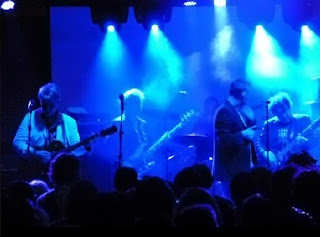 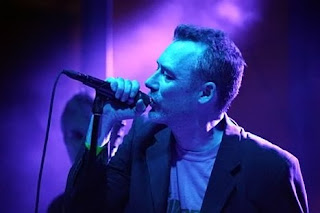 I still have a recorded version of this song that I made when seeing them at Roseland in New York City circa the mid-90's.  This performance sounded just as crisp and inspiring. 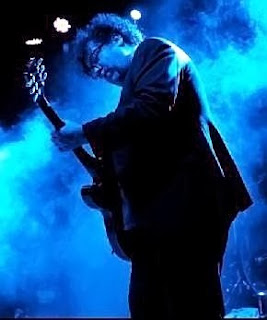 The band relied on a lot of material from their US breakthough album "Automatic" - which was perfectly fine with me, as it ranks right at the top of my all time fave JAMC albums. 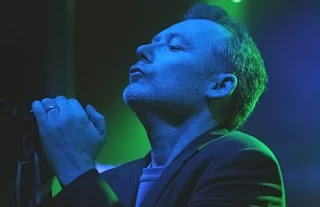 It wouldn't be a true Jesus & Mary Chain live show unless there wasn't at least one "stop/start" moment in the set.  Of particular note was on the 5th song in - when "Blues From A Gun" veered off course at the beginning - prompting Jim to scowl at his brother.  But as in so many concerts previous, they got it together and delivered a more-than satisfying rendition. 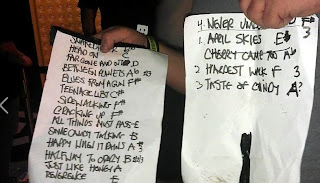 The hand printed setlist.  What they actually played varies only slightly.  Put "Just Like Honey" as the 13th song, and "Never Understand" as the final one played.  17 glorious songs in all.

Posted by DaveCromwell at 11:35 AM

I appreciate you saying that, Spike.

I do try to tell my stories and anecdotes with skill and wit.

Pleased to know they come off that way.

But hey, were are the after-show ligging shots ;)

Great photos Dave! I quite like the ones with the blue/purple lights. Have always liked such photos of concerts etc.

I know you love the JAMC as much as I do, Andy (and that is saying a lot). As for any post-show trawling - what happens in GlasVegas, *stays* in GlasVegas ;-)

I will agree, Anouk - there's something about being bathed in blue concert lighting that creates a uniformly cool imagery.

you are a rocket, dave, to cover this amount of gigs in one day. :)
seems like "jesus and marry chain" pull out a good show. :)

fabulous pics, for sure :)

I felt like I was driving around in a "rocket" sometimes, Mr. Smork.

The JAMC put on an amazing show!

What a great photos Dave! Agree with Anouk about purple blue lights, so cool. Wonderful work you did. ;-)

It seems that purple/blue lighting makes everything better!

Anyone who knows me - already knows how important that bands music is me.

I'm super glad I was able to hear them perform it live again, one more time.