New York City's The Twees play energetic pop'n'nroll featuring the clean, two-guitar-attack made popular by early 2000’s bands like Interpol and The Strokes. 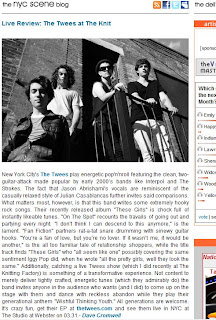 The fact that Jason Abrishami's vocals are reminiscent of the casually relaxed style of Julian Casablancas further invites said comparisons. What matters most, however, is that this band writes some extremely hooky rock songs. 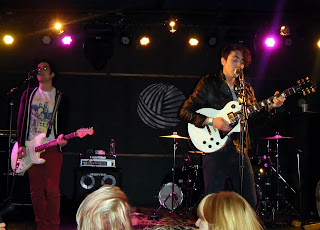 Their recently released album "These Girls" is chock full of instantly likeable tunes. 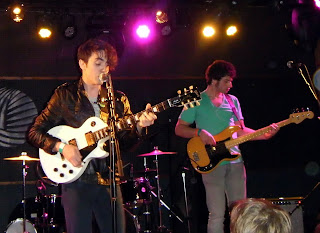 "On The Spot" recounts the travails of going out and partying every night. "I don’t think I can descend to this anymore," is the lament. 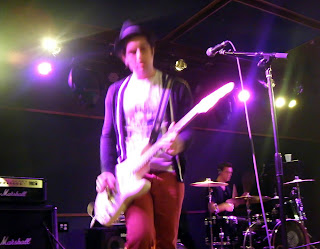 "Fan Fiction" partners rat-a-tat snare drumming with sinewy guitar hooks. "You’re a fan of love, but you’re no lover. If it wasn’t me, it would be another," is the all too familiar tale of relationship shoppers. 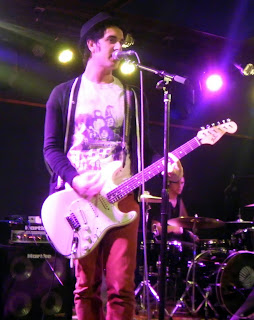 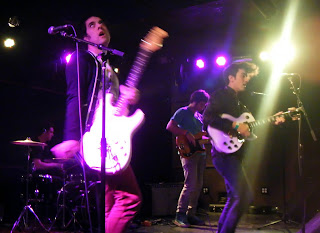 The title track finds "These Girls" who "all seem like one" possibly covering the same sentiment Iggy Pop did, when he wrote "all the pretty girls, well they look the same." 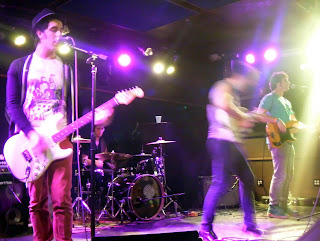 Additionally, catching a live Twees show (which I did recently at The Knitting Factory) is something of a transformative experience. 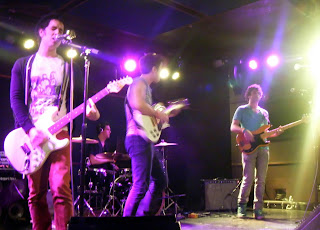 Not content to merely deliver tightly crafted, energetic tunes (which they admirably do) the band invites anyone in the audience who wants (and I did) to come up on the stage with them and dance with reckless abandon while they play their generational anthem "Wishful Thinking Youth." 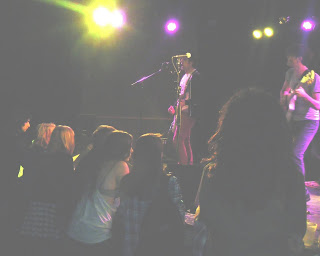 Popular Web Vloggers can be spotted in the audience 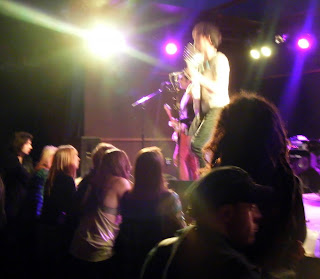 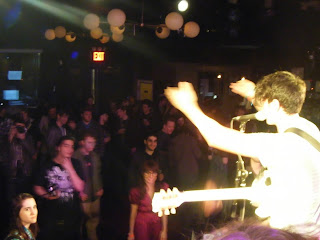 A view from the stage
and the "reckless abandon" of both fan and band. 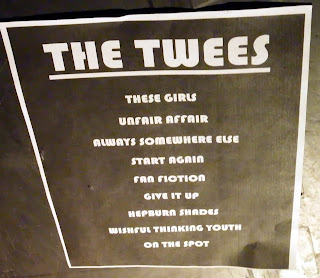 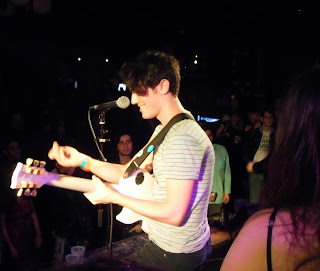 Jason appears to be enjoying himself 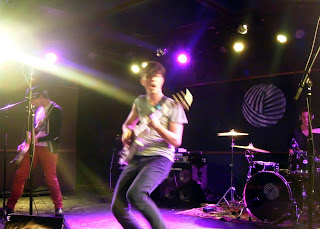 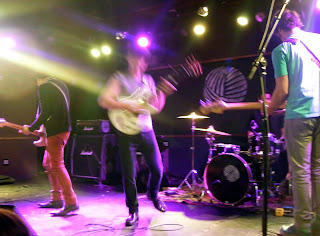 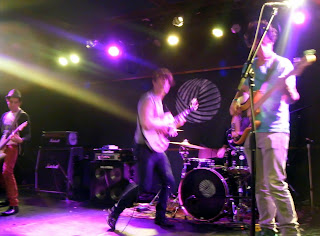 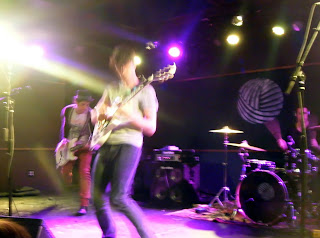 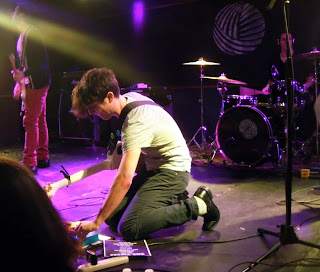 You know things are getting serious when the pedal twisting begins 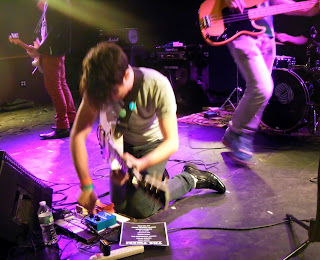 "what's this button for?" 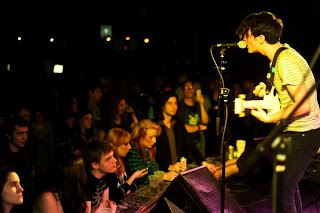 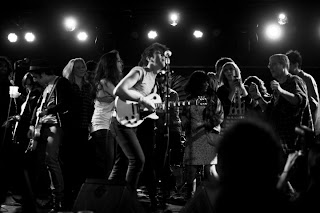 Its an all out party on stage. ___
Jason and Cromwell, having a chat at the show 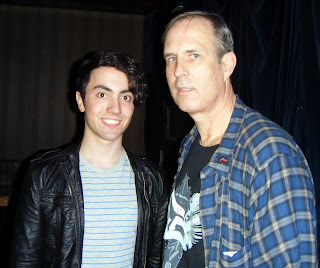 Get their EP at http://www.thetwees.com/ and see them live in NYC at The Studio at Webster on 03.31
All generations are welcome.
It's crazy fun.
And be sure to read The Deli Magazine. Where this review also resides:
http://nyc.thedelimagazine.com/node/4763

Posted by DaveCromwell at 1:51 PM

Great review Dave, love the photos.
And lol @ that 'view from stage' video ;)

Well I never thought I'd see you 'Pulling Shapes' again LOL. Looks like a wild one. Hehe, next you'll be stage diving!

Anouk and Andy - I go to SXSW next week. I shudder to think of what is going to turn up on my handheld flip!

Glad you dig the band. Not only do they have great tunes, but they are nice people as well.

The Twees certainly gave their all that night. I really appreciate a carefully produced set list, especially given the fact that such a document is an intrinsic blog feature of any gig that has been Cromwelled. I might also add that despite the brevity of your on-camera stage appearance, I confess that I find you to be a more graceful toe-stepper than Sir Fred Flintstone. Go Cromdaddy, Go!

Since I know you witnessed these very shenanigans on this night, you can certainly testify to how much fun a live Twees show is.

nice piece. not bad pics (i see the colours are coming back in to the pics as last few pieces was a bit dark). :)))
were you really dancing on that stage? so now you are a dancer?... :) writer, artist, and now a dancer - what's next staring in some holywood movie? well done!
as for the band - you can't go wrong in artists wearing porkpie hats. :) as indy fan - i like this band. even if you were comparing them to "the strokes" - i would compare it to the "libertines" - for singing and lyric and "belle & sabastian" for music and guitars. these were my personal associations.
good post about a good band. :)

I'm glad you like the band, Mr. Smork. Until you mentioned it, I didn't realize the "porkie hat" connection the two of you have in common. However, I like to think of your's as a "smorkpie" hat ;-)

As far the pogoing I do to rock music - I think it would be a bit of a stretch to actually call it "dancing."

Still - its a rhythm romance - I'm having with my shoes.

The band's music is not really my cup of tea but I have to say I like the way guitars and bass work together. The bass guitar especially- a talented musician is using it right there.

And the stage video is priceless. I hope to see more of that from other shows as well ;)

Thanks, eagle. Glad you dig the bass (and I agree, really solid) and that wild from-the-stage video.

I will be out in Austin, Texas at SXSW soon and have a feeling there might be more of this type of footage.

This band sounds great Dave. Good pics. I like the way he plays guitar.
It was amazing to see you in the stage, had it been in your place would have danced with more enthusiasm hahaha!!!
Congrats!