Its day three, and the lack of sleep or any semblance of my "normal" life does not dampen my enthusiasm.

So, it off to another day of raging Day Parties at SXSW.

First up - a band I've targeted to see all week, and now it the moment. 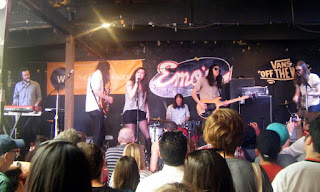 Their album is great 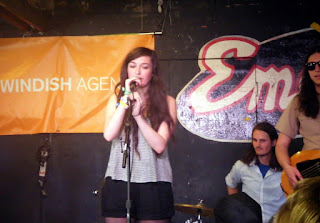 The girl lead singer is cute 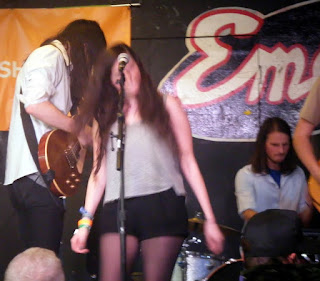 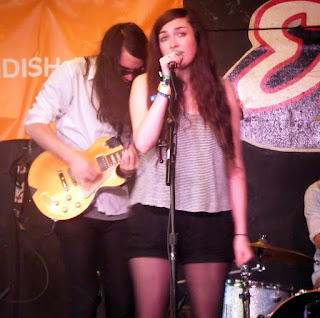 What more do you need?

Joyous set concluded, its a mad dash from the east side to the west
to catch all the fun at Waterloo Records
First up - the Joy Formidable 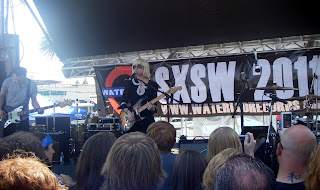 I had enjoyed some of their recorded work, but was not prepared at all for the stunning live show they deliver 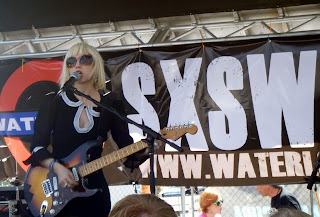 She is a petite dynamo! 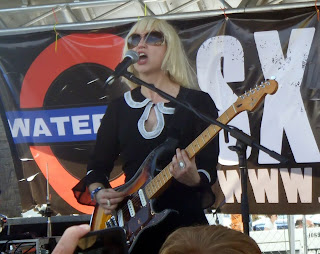 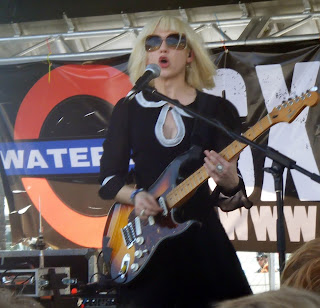 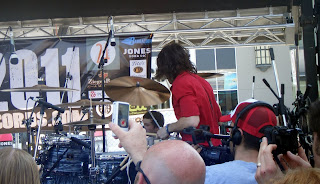 the drummer totally rocks. But - what is that bald dude
doing with my flip? 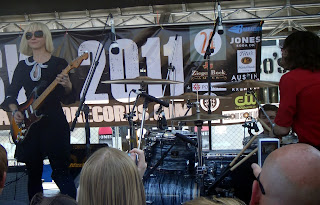 She engaged her drummer in brilliant musicians
back and forth comraderie 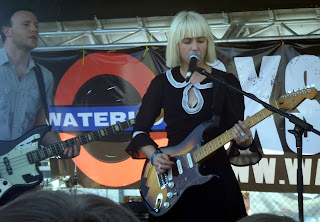 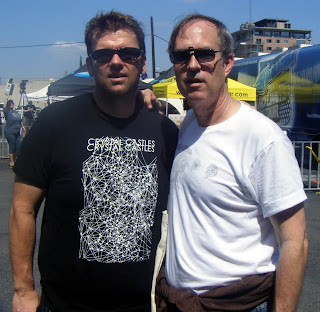 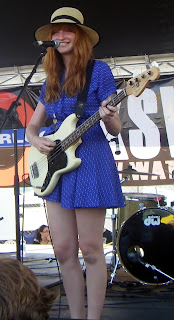 Yes, I know Katy here is also in (and more known for) The Vivian Girls. 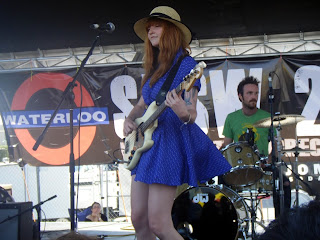 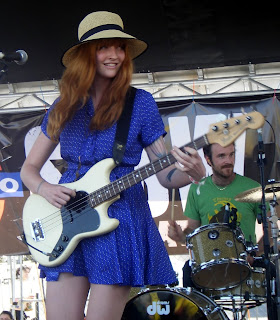 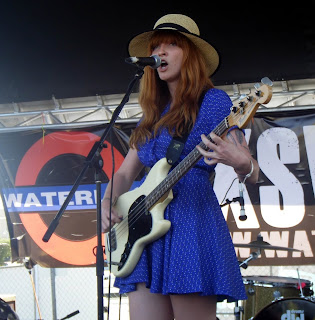 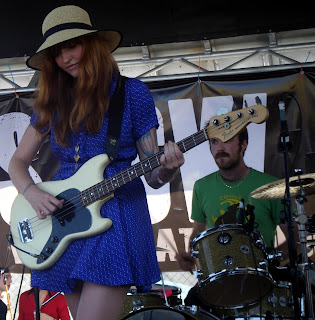 And play the bass 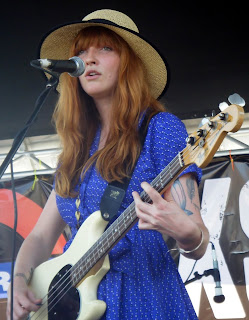 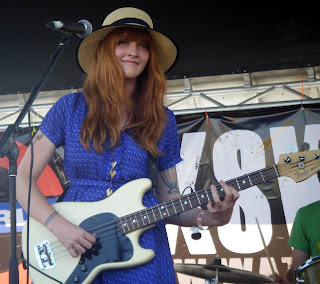 
OK - now time for the heavyweights
Just days before their big time, national tv appearance on
The David Letterman show 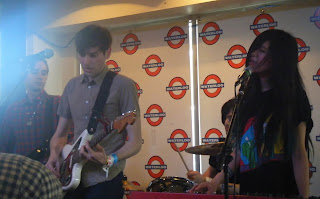 Alex, Kip, Kurt and Peggy - I feel like I've known
them for years now 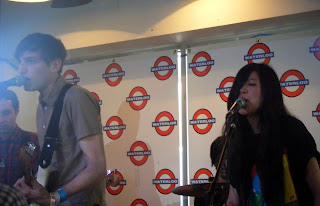 They are the head of the class, that everyone now follows 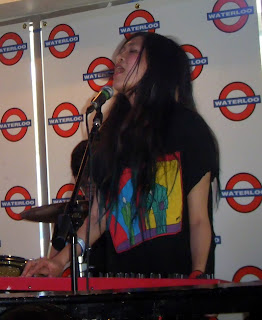 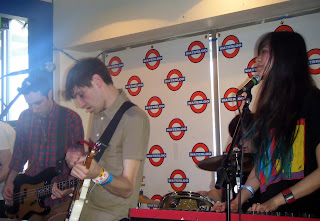 Alex caught me by surprise with that medallion around his neck. 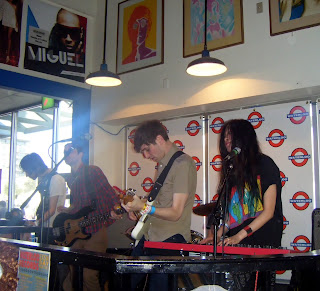 They could all barely fit on that tight little stage
Christophe sounded great, despite having little room to move 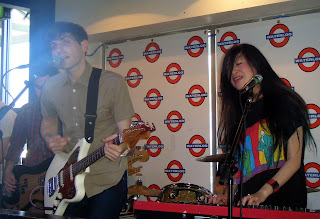 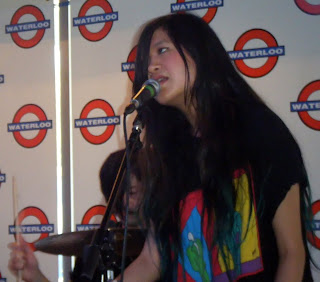 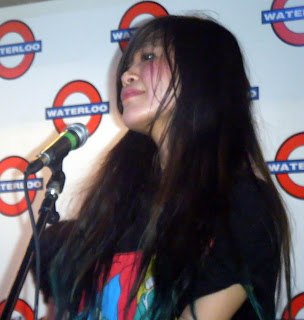 I'm so rock & roll I don't even comb my hair 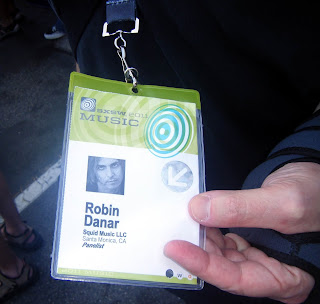 None other than the sound sculpting legend himself.
And this is just the Day portion of Friday.
Night madness to follow.
Posted by DaveCromwell at 4:14 AM

spring must caught you, dave. ;) girls, girls, girls in this post. don't think i am complaining. :)
cults are quiet a cool band remember them from your posts before you left to austin. and girl is quiet leggy i got to say. :)))
la sera seems relaxed, but is it only me, but she reminds me of peggy bundy from tv show "married with children". :)))
and (i got to copy and paste it) The Pains Of Being Pure At Heart is a cool band also remember when you wrote about them and since then they got their place in my playlist. :)

Love all of your thoughts and commentary, Mr. Smork. ;-)

And getting these bands on your playlists are really my No. 1 priority here.

Nice captions juxtaposing the pics, especially the La Sera sequence. "Alex caught me by surprise with that medallion around his neck." Then he either sang "Don't Stand So Close To Me" or entranced you with a hypnotic reading of "You Are Getting Very Sleepy." PS-the makers of Red Bull wanted to thank you for your patronage:)

The makers of Red Bull should offer me a sponsorship, VFSD!

I'm pleased to read you find my photos (and their subsequent captioning) to be, at the very least, entertaining.

I do enjoy taking them - then processing and assembling them (not to mention the running commentary).

Yaaay there's Ritzy!! Great stuff. The drummer often beats so hard that at the end of a set his sticks are literally pulp!

VP - I have to say that The Joy Formidable was probably the single biggest "discovery" (for me) of the whole event. Yes, I know you (and one or two others) had been telling me about them - and I was rocking an advanced MP3 of theirs - but none of that really prepared me for the dazzling, dynamic show they put on.

I don't doubt that the drum sticks are completely pummeled into twigs by the end of their set.

I liked the pictures,great. It was like to be there too...

Oh, thanks Paty. I am hoping to convey a sense of "being there" so it pleases me to read what you wrote.

Joy Formidable- the great discovery of the last few weeks. What am I talking about- of the last few months! Absolutely fantastic music. It's great to have those moments captured, Dave.