My appreciation for the band Ringo Deathstarr began in the summer of 2009. I had seen their name on the club listings around town previous to that, but like with many things, didn’t get around to giving them a listen right away. All that changed when I heard the songs “Some Kind of Sad” and “Sweet Girl,” both of which were on their debut 5 song EP. Being totally blown away by those songs (and the rest of the tracks on there) I made a mental note to see them live when next they came back here to New York. My opportunity came in October of that year for the CMJ festival. The band had booked a week of shows and I attended nearly all of them. Simply put, they are one of my favorite bands. Now they have a brand new, full length album. It is truly a joyous occasion. Here is my track-by-track impressions and analysis. 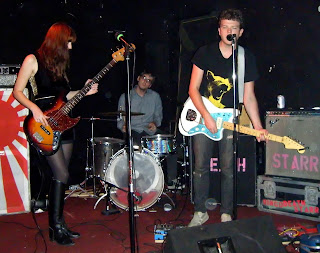 FX distorted percussion introduces "Imagine Hearts," the opening track off of Ringo Deathstarr's full-length debut album "Colour Trip." The twisted sonics are only beginning here, as guitars begin and sound like they've been pressed on warped vinyl. In spite of these potential cause-for-concern sonic mutations, it all sounds quite appealing. With a clean, un-enhanced driving bassline that pulls just a tad from My Bloody Valentine's "Soon," the vocals are delivered by female bandmember Alex (Galexy) Gehring in a smoothed-by-sandpaper way. There's brief moments of the Scottish highlands touched upon as well. 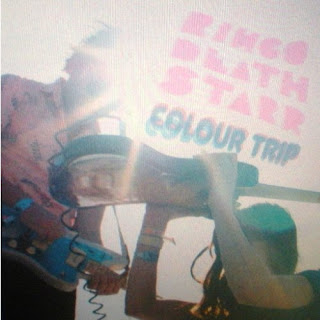 "Do It Every Time" finds frontman Elliot Frazier drawing on his deep "Jim Reid" voice (with a wink and a nod to that bands song “The Living End”). Not content to stay just there, Galexy is soon called to duty, providing fem-vox counterpoint, especially on the repeated "do it everytime" refrain. “We’re falling apart again. She took my cardigan. Ripped out my heart again,” finds Frazier playfully updating the Reid’s lyrical style a few decades to include the current fashion staples. The guitar break is sharp and uplifting. There are layers, William Reid wah-whazzle. What's not to love? 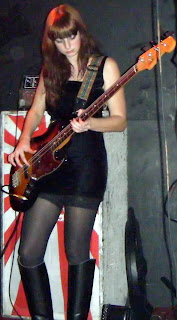 "So High” brings the peppy, skipping down the streets of London vibe and takes what pre-Loveless My Bloody Valentine did on "Never Say Goodbye (as we chase the clouds away)" and gorgeously updates this seemingly innocent boy-girl call and response genre. There is a perfect atmospheric guitar passage (so reminiscent of "Sweet Girl" from their debut EP), between the vocal tradeoffs and the repeated “I’m so high” is the vocal liftoff. "Bubblegum and ecstasy, made me feel the power, if you walk around with me, I will show you how." 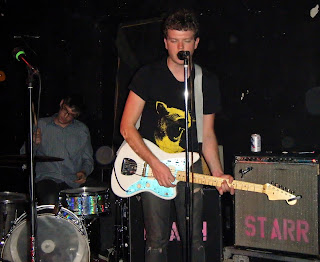 "Two Girls" pivots off the opening thunder drums to cathedrals of angelic female vocals. The rhythm stays locked down hard so guitars can pulse and expand your ear canals. Shards of inappropriate sonics bathe you in an alien light. The monster has come to life and wants to multiply. Wicked tambourine rattle clacks the two and four of lyrically unintelligible verses. Acoustic guitar breaks serve to clear the audio palate, allowing additional mutated electric guitar washes to make a more dynamic impression. 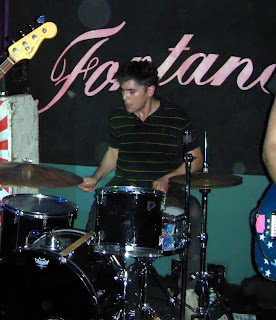 Drummer Daniel Coborn live at Fontanas, October 20, 2009
"Kaleidoscope" is bass heavy and drum rude. Elliot's vocals, however are majestic and downright romantic. Do I have to mention that the overall sound quality of this recording is exquisite? Please let me do so now. "Have you seen the shapes of the kaleidoscope?" is the opening lyrical question. "Why did you run, when I turned your eyes around?" Ah, if only the answer to that could be easily figured out. "Got a crush on you - what can I do?" is as much statement as question. [Cromwell's Side Note: I would only add to this sentiment - please don't do anything to destroy this feeling. That's a direct message from me to anyone I currently have a crush on (and most likely, you know who you are). Please don't screw it up for me. I have no expectations - only aspirations.] Getting back to the song, there is a wistful feeling to it all. Not all that dissimilar from what a band like The Pains of Being Pure at Heart does best. Of being sadly pensive, especially about something yearned for. "Send me a post-card from nowhere." 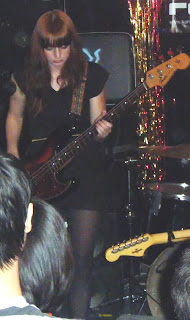 "Day Dreamy" rides the tambourine snake, surrounded by beams of backwards guitar and Belinda Valentine-like "oooohs." Brilliant lyrical moment - "she was just a teardrop - I was just a waste of time." I would be remiss in my connect-the-dots obsession if I didn't mention at least something from MBV's "Loveless" as a reference point - let's say, "Blown A Wish" (there - now I feel better). 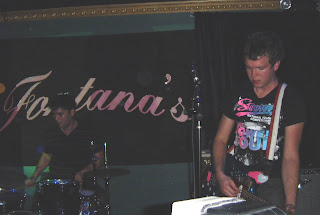 "Tambourine Girl" had already been in steady rotation on my personal playlist due to the fact it was initially released in limited edition as one side of a split single with The Depreciation Guild. Merging a heavy leaden foot with peppy pop counterpoint, “touch me, touch you there” is the sentiment expressed. The initial primary riff is a grinding slog of factory machinery – think Iggy Pop’s “The Idiot” and the song “Mass Production” as a kindred spirit. 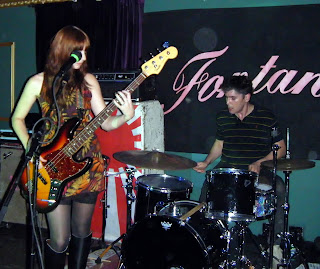 “Chloe” rolls out Elliott’s breathy vocals, shadowed by Alex’s Belinda-esque “ooohs.” In fact, “oooh, next to you” is the repeated sugary phrase employed. More unnatural factory machinery textures infect the corners and shatter any semblance of complacent serenity. Even when it gets pretty, the rude undercurrent is never far from you. 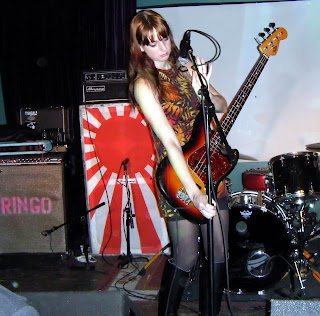 “Never Drive” takes Elliott’s breathy and deep voices and merges them together. A static snare drum rattle and bass guitar pattern lay out a solid groove for melodic guitar patterns that are almost sweet – almost. Are they still a bit dirty? Of course! 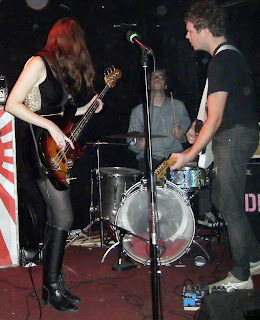 “You Don't Listen” could be slipped quietly onto a reissue of “Psychocandy” and called a lost track – and everyone would believe it. Hell, I wish it had been on the original! Oh, well - we've got it now. Drums n' handclaps underscore buzzing bees guitar lines. "There is nothing left to decide, when I look into your eyes. Take me to paradise - close my eyes your sweet surprise. I won't call you on the phone. You don't listen to Ramones. I don't like you anymore. You will never understand what I need." 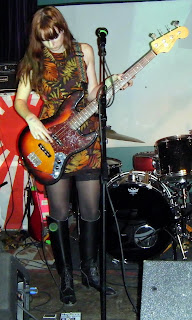 The final track “Other Things” is somewhat unusual track for this band, as it’s rhythm track emphasizes a mechanized, clacking percussion. The vocals are sugary and angelic, while majestic guitars wash all over. “So what if we don’t have money? we have some other things,” is the charmingly innocent emotion expressed. "You know we got each other babe - and that's the important thing." Wonderfully pitch bended guitars are further enhances by higher pitched extended guitar notes. Alex's vocals have FX on them, making her sound more like Ronnie Spector than Best Coast. 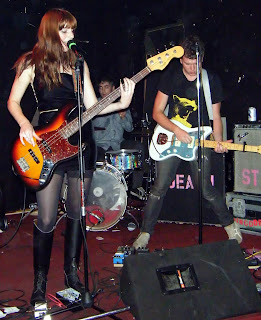 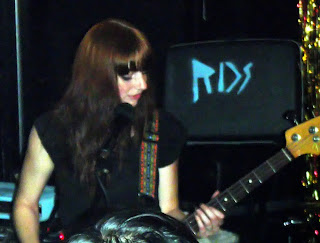 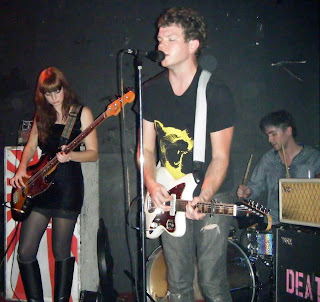 With the conclusion of my track-by-track analysis, I can only state that this is an amazing record. Its one I've waited two years for now and I couldn't be happier with the results. If you love the bands I've mentioned as references (and whom they make no secret of referencing themselves) you'd be crazy not to go out and get this record.

It makes "reunions" by those other bands far less important or even necessary. Ringo Deathstarr has the mantle now and they are running full steam ahead with it. 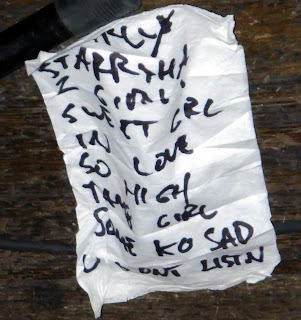 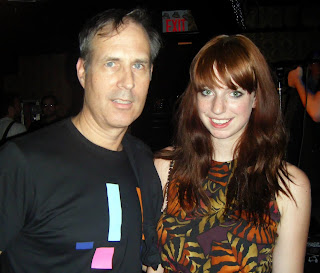 The RINGO DEATHSTARR album will be out in USA and Canada on March 8th on Sonic Unyon Records, licensed from Club AC30!

Thanks for including that, Sean.

ok. words of mr cromwell sounds sweet. now i am keen to hear them.
and chick in long boots looks sweet. :)

That's a double "sweet" my friend.

(and I cannot disagree with either)

Got round to listening to this today, had albums backing up- but this was well worth paying attention to . I can see why DC names it among his faves , it's all the essential elements we require from our music eh! Excellent stuff, jolly good photos there too

Since I know you also spent much of the 1990's under the spell of those very bands RD pays ocassional homage to on this record - it stands to reason you would enjoy what they are crafting here.

You envolved me with your spirituality narrative Dave! And put the final seal with that cute picture. They are very good!

Ah, I like that description - "spirituality narrative." Glad you like the photos too, Paty. Since I know you have a wonderful artists eye, I'm pleased to know.

Another great review Dave. Will have a look at their songs on youtube

Well, there's two of those songs (on Youtube) right here. Be sure to give those a listen, Anouk.

I'm gonna go with 'Tambourine Girl'hmm or maybe 'Do It every Time' hmm or then again maybe 'You Don't Listen'... Oh sod it I like them all!

But - "Kaleidoscope" really gets to me.

Whoa, I am impressed.

I don't want to get in all the details of your text here, Dave, so I will get to the bone. The band's sound is UNIQUE. "Imagine Hearts" sounds like a mix between pop/rock/shoegaze and Nine Inch Nails-style. It's the first time I've heard a combination like this. This track also reminds me of Bowie's "Heroes", which is natural- Robert Fripp of King Crimson played on that song, Adrian Belew played live with Bowie later on, even later on they created one of King Crimson line ups, later on King Crimson inspired the vast sound of Nine Inch Nails and of course Adrian Belew played on their songs as a guest. Even without those sonic connections- from what I've read and heard here I have to say that this is one great band. They've got their own sound, a sound that I really dig. The only thing I can complain about is the name- I'm not a Beatles fan, to put it lightly ;)

Ha! I can always count on you, eagle - for a unique take on it all. I love your points-of-reference and completely see what you are saying.

One of the kicks I get from writing these reviews is seeing what others feel about the same thing I've heard. You never fail to provide insight, my friend.

(just copy that link into your browser).