Midway through the month of May, and time again to recap and review recent Deli Magazine features written by yours truly.  An interview and some features - all focusing on the music these bands create. 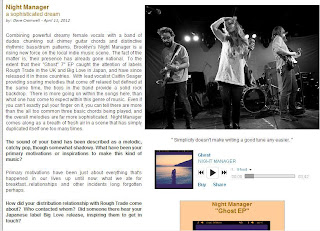 Combining powerful dreamy female vocals with a band of dudes chunking out chimey guitar chords and distinctive rhythmic bass/drum patterns, Brooklyn’s Night Manager is a rising new force on the local indie music scene. The fact of the matter is, their presence has already gone national. To the extent that their "Ghost" 7" EP caught the attention of labels Rough Trade in the UK and Big Love in Japan, and have since released it in those countries. With lead vocalist Caitlin Seager providing soaring melodies that come off relaxed but defined at the same time, the boys in the band provide a solid rock backdrop. There is more going on within the songs here, than what one has come to expect within this genre of music. Even if you can’t exactly put your finger on it, you can tell there are more than the all too common three basic chords being played, and the overall melodies are far more sophisticated. Night Manager comes along as a breath of fresh air in a scene that has simply duplicated itself one too many times.
The sound of your band has been described as a melodic, catchy pop, though somewhat shadowy. What have been your primary motivations or inspirations to make this kind of music?
Primary motivations have been just about everything that's happened in our lives up until now: what we ate for breakfast...relationships and other incidents long forgotten perhaps.
How did your distribution relationship with Rough Trade come about? Who contacted whom? Did someone there hear your Japanese label Big Love release, inspiring them to get in touch?
I have no idea actually, we never talked to them, we found out about that at the same time everyone else did. I assume it was Haruka at Big Love who took care of that, cheers to her.
Your sound at times presents a softer, day-dreamier side especially vocally. Yet paired with that comes densely layered guitars, bathed in reverb, with melodies that show more depth than the current collective wave/gaze deciples. Is one of your goals to push this genre in new and more interesting directions?
We don't have any musical goals except to make songs we like to play and listen to. There're a lot of great, creative minds in Brooklyn. Every artist brings something unique to the table and hopefully we're no exception to that. We're not concerned with setting an example for other musicians or the recording industry we just do whatever we feel like doing.
Currently there is a popular genre of all female or female fronted bands like Best Coast, The Dum Dum Girls, Frankie Rose, Cults and The Vivian Girls. While they all have their own positive qualities - to varying degrees - their songs tend to cater to a "teen angst" and more "pop" oriented audience. Do you see Night Manager, at the very least brushing up against this type of sound, but then taking it into more complex waters? Or do you see yourself having more in common with pop-deconstructionists like, say A Place To Bury Strangers?
We have more in common with the first bands mentioned, but we're not trying to write for a specific audience. "Ghost," for a grunge tune, is relatively complicated--the first time we played it live was a disaster--there are a lot of chords in there and the melody goes to some unusual places. But I don’t think that necessarily makes at a better tune than "platonic lovers" which has a fraction of the chord movement and a vocal melody which sticks around the same place. Simplicity doesn't make writing a good tune any easier.
How is the songwriting developed? Is it the predominant work of one member? Or is there a collaborative process between multiple members of the band?
Typically it's not collaborative. But, we now have two guitars which means Tassy can write guitar lines over chords he or I write. I think it’s gonna be more of a group effort in the future.
Could you (or any band member) recommend something interesting they've read. Be it book or magazine article?
I was reading the back of a Honey Smacks box the other night but I was wasted and i can't remember what it said. Something about nutrition, maybe. 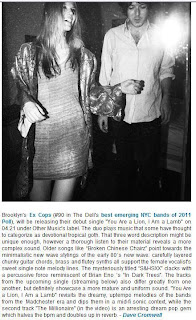 Brooklyn's Ex Cops (#90 in The Deli's best emerging NYC bands of 2011 Poll), will be releasing their debut single "You Are a Lion, I Am a Lamb" on 04.21 under Other Music's label. The duo plays music that some have thought to categorize as devotional tropical goth. That three word description might be unique enough, however a thorough listen to their material reveals a more complex sound. Older songs like “Broken Chinese Chairz” point towards the minimalistic new wave stylings of the early 80’s new wave: carefully layered chunky guitar chords, brass and flutey synths all support the female vocalist's sweet single note melody lines. The mysteriously titled “S&HSXX” clacks with a percussive force reminiscent of Brian Eno ’s “In Dark Trees”. The tracks from the upcoming single (streaming below) also differ greatly from one another, but definitely showcase a more mature and uniform sound. "You Are a Lion, I Am a Lamb" revisits the dreamy, uptempo melodies of the bands from the Madchester era and dips them in a mid-fi sonic context, while the second track "The Millionaire" (in the video) is an arresting dream pop gem which halves the bpm and doubles up in reverb. - Dave Cromwell 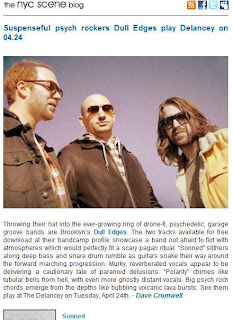 Posted by DaveCromwell at 8:59 PM

Great one Dave, I quite like that Night Manager song!

Sophisticated DreamPop hehe I like it:)
I agree with Anouk about Night Manager song. cool one)
good review Dave as always :)

nice piece.
i can understand why ex cops are liked un uk and japan. among that dreamgaze they have some brit pop elements. so their sound might be more familiar and more pleasant for the ears.
as dull edges are more underground (and in my opinion undercover)sounding band. notice this style is popular in us. and some cases in scandinavia.
all in all, nice piece.

Night Manager has been making some big waves here in New York. They've been supporting a lot of bands with record company backing.

Ex Cops appear to be experiencing something of a "buzz" as well.

I like the music that all of these bands produce. Hence my writing about them. ;-)

As always you are on the cutting edge Croms- such great music in this post- I especially like ExCops but all are wonderful in their own way - Perhaps we will go see some bands live should I happen to be in New York in the not so distant future!!!

Great article/review, Dave! And I really dug the tune by Night manager.....thanks as always! :)

As always, thank you for giving my ears some new bands to listen to. Liking the Night Manager song quite a bit.

All of my friends here are more than welcome to join me on a rock show club crawl around NYC - and the out of state road trips as well.

You only live once.

This Night Manager is something to behold! Quite moving, and your interview with them was nothing short of special either, I especially liked your question about similar girl fronted bands, good stuff!

Speaking of "show friend attendees" - happy to hear that Night Manager interview was insightful for you, MSSS