The first week of May provides an opportunity here to feature three bands I've recently profiled in The Deli Magazine. 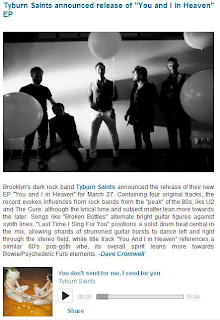 Brooklyn's dark rock band Tyburn Saints released their new EP "You and I in Heaven" on March 27. Containing four original tracks, songs like "Broken Bottles" alternates bright guitar figures against synth lines evoking peak 80's era U2 and The Cure. The lyrical tone and subject matter lean more towards the later, however. "Last Time I Sing For You" positions a solid drum beat central in the mix, allowing shards of strummed guitar bursts to dance left and right through the stereo field. While title track "You And I in Heaven" reference a similar 80's pop-goth vibe, it's overall spirit leans more towards Bowie/Psychedelic Furs elements. 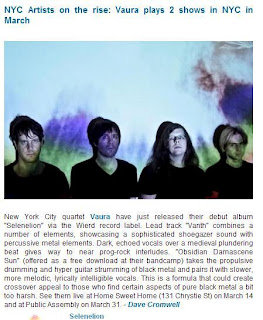 New York City quartet Vaura have just released their debut album "Selenelion" via the Wierd record label. Lead track "Vanth" combines a number of elements, demonstrating a higher than average level of songwriting and musicianship. Dark, echoed vocals over a medieval plundering beat gives way to near prog-rock interludes. "Obsidian Damascene Sun" (offered as a free download at their bandcamp) takes the propulsive drumming and hyper guitar strumming of black metal and pairs it with slower, more melodic, lyrically intelligible vocals. This is a formula that could create crossover appeal to those who find certain aspects of pure black metal a bit too harsh. 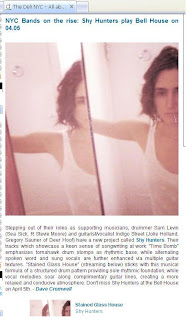 Posted by DaveCromwell at 8:08 PM

always great to hear about new bands to check out!

Yeah, these up-and-comers all have recently released some interesting new stuff. Part of a "dark wave" that is forwarded to me from The Deli (because they know I'll get into it).

Very nice as always Dave, I like so much Stained Glass House,cool song, makes me feel that i'm dreaming... :)

Yeah, that was the one entry that was more "dream pop" than actual "dark rock"

That's what I do here (and there) - spread the word about new music. Just press play on those audio links provided, and then see if my words match up with what you are hearing.

Great review again Dave, I quite like "Stained Glass House"!

Yeah, that Indigo Street sure has a pretty voice, doesn't she?

Really loving Tyburn Saints- the whole cure/early U2 vibe is very cool- Lots of good albums/EPs with You & I in the title lately eh?? I hear a bit of Joy Division too in them (Love will tear us apart), and his voice sounds a bit like Ian McCulloch

Great thoughts on that band, Will. I totally hear your references. Yeah, "You & I" is on a bit of a roll, lately ;-)

And let's not forget the Yes classic from those golden prog rock yesteryears.

But yeah - Joy Division - Bunnymen - I love all that stuff.

Well, there's actually three band names there - so I can only guess at which one you found the most "interesting." ;-)

At the end of the day - a band name is only as good as the music said band plays.

Hey Dave...once again, thanks for introducing me to some new music. Really digging the Tyburn Saints...can definitely hear the Cure, Bunnymen, and even The National. Good stuff. The Shy Hunters song is pretty good also...liking Indigo Street's vocals.

Not surprised you like that whole 80-90's alt-rock sound, as we share many similar tastes. I like that you also mention a band I wouldn't think of - that being The National.