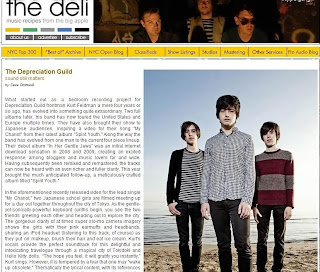 
What started out as a bedroom recording project for Depreciation Guild frontman Kurt Feldman a mere four years or so ago, has evolved into something quite extraordinary. Two full albums later, his band has now toured the United States and Europe multiple times. They have also brought their show to Japanese audiences, inspiring a video for their song "My Chariot" from their latest album "Spirit Youth." Along the way the band has evolved from one man to the current four piece lineup. Their debut album “In Her Gentle Jaws” was an initial internet download sensation in 2008 and 2009, creating an excited response among bloggers and music lovers far and wide. Having subsequently been remixed and remastered, the tracks can now be heard with an even richer and fuller clarity. This year brought the much anticipated follow-up, a meticulously crafted album titled “Spirit Youth.”

In the aforementioned recently released video for the lead single "My Chariot," two Japanese school girls are filmed meeting up for a day out together throughout the city of Tokyo. As the gentle-yet-sonically-powerful keyboard synths begin, you see the two friends greeting each other and heading out to explore the city. The gorgeous clarity of at times super slo-mo camera imagery shows the girls with their pink earmuffs and headbands, sharing an iPod headset (listening to this track, of course) as they put on makeup, brush their hair and eat ice cream. Kurt's vocals provide the perfect soundtrack for this delightful and intoxicating travelogue through a magical city of Tokidoki and Hello Kitty dolls. “The hope you feel, it will gratify you instantly,” Kurt sings. However, it is tempered by a fear that one may “wake up obsolete.” Thematically the lyrical content, with its references to “data” and things being “digital” more closely match the images of a cutting-edge electronic Japan. In fact, perhaps the song title itself refers to some kind of space chariot, rather than the ancient vehicle one might initially think of. The song and video climax together in an uplifting blend of new discoveries, wonderment and that magical feeling of shared experiences.

The Depreciation Guild -- My Chariot from Maura Milan on Vimeo.

The band’s initial sound and visual imagery has close ties to the video gaming world. This is no casual association as Kurt has also created an iPhone/iPod Touch game called TileWild featuring three new tracks and an 8-bit sound design. Designed in collaboration with longtime friend Hayden Cacace, the game is a modernized evolution of the Tetris experience. However, rather than simply positioning falling blocks into their appropriate places, TileWild includes the concept of additive and subtractive color mixing to the fray.


Along with Kurt on vocals, guitar and overall sound design, The Depreciation Guild is comprised of twin brothers Christoph Hochheim (guitar, vocals) ,Anton Hochheim (live drums, percussion and samplers) and newest member Raphael Radna on bass guitar and keyboards. Their latest album “Spirit Youth” shows just how far their sound has evolved since Kurt’s initial foray into Famicon driven song construction. “Crucify You” features Kurt’s lead vocals in a clear and relatively unadorned manner, with very little sonic masking going on. The primary rhythm guitars are also clean and undistorted. What powers the song forward is the distinct melody guitar line behind the chorus. Live sounding cymbal and heavy drumming further emphasize the difference between their first and second album. The verses are left uncluttered, keeping the primary focus and emphasis on Kurt’s vocals. A synth pad comes up in the mix towards the end of the song, providing additional richness and texture.

“Blue Lily” slows the tempo down somewhat, allowing Feldman to further explore his smooth vocal stylings, that are seamlessly woven within a traditional rock song structure. “Dream About Me” existed as something of a crossover song between albums one and two. Delivering a unique hybrid of 60’s era soulfulness and present day data-centric gaming textures. The percussion is distinct in its electronic nature, positioning the track a bit closer to the first album. Kurt’s lead guitar melody line is a thing of beauty, with it’s wiry dance up the guitar next. That quality musicianship accounted for, this song is still really all about the silky, heavy-lidded vocals.

On the other hand “November” pulses forward via a thumping heartbeat kickdrum and gently picked guitar chords. Synths buzz, Kurt sings and then on to a glorious angular time signature change. The keyboard textures are strong on the airy and spacious verses. On its second pass through the angular change becomes the central sonic focus. Up to a drum heavy breakdown (with distant percussive clacks) that leads to gentle guitar progressions. Only to build it all up again. The title word is repeated throughout while layers of keyboards bathe the sonic landscape till its grand conclusion.

“Trace” is driven by an instantly hooky guitar line. Drums literally boom in the background while keyboard melodies work their way into the mix. The distinct guitar interplay between Kurt and Christoph really shine when they play this live. While Kurt features on the early melody lines on top, Christoph is slashing a rhythmic counterpoint. Deeper into the song Christoph creates a buzzing undercurrent by rapidly strumming a melody line behind Kurts vocals. It is just this sort of attention to detail that sets The Depreciation Guild apart from the pack of noisy bands popping up now on a daily basis.

Kurt frequently gives credit to his producer Josh Eustis for the high quality sonic clarity and detail to their albums. "Spirit Youth" was created between June and October, 2009 at Benelli Sound Labs in Chicago, IL., with additional mixing work from Studio Engineer Roger Seibel. Having top notch mic's and amps to record with is so essential for a quality finished product. Properly tracked drums can often be the difference between a merely ok sounding record and a truly great one. Besides fully recording and producing "Spirit Youth" with Josh at his studio in Chicago, they also had him remix and remaster their debut album "In Her Gentle Jaws." In addition to producing and recording other bands, Mr. Eustis has his own recording project that goes by the name "Telefon Tel Aviv."

What stands out the most about The Deprecation Guild is how they flawlessly merge a soft romantic feel with hauntingly beautiful melodies, but are not adverse to sophisticated key changes within those very same songs. And despite the lush quality of their recorded works, the band fully recreates it all in the live setting. On completing of their first headlining European tour, the band will return to New York and select east coast cities for a number of significant shows. 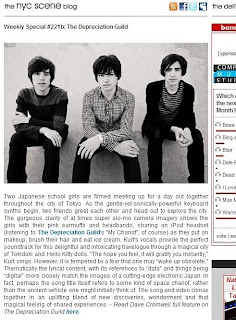 Posted by DaveCromwell at 1:16 PM

Nice work Crommers, an in-depth look with laser like technical analysis which is become a trademark.

Like the melody and relentless beats of 'My Chariot'

Opps I meant "has become". Hey it's Sunday morning I haven't had my caffeine or heroin yet!

Oh it's quite alright, Mr. VP. I'm sure once your "substance of choice" kicks in, all will be well in VonPipian land.

Glad to hear you dig "My Chariot"

It is (as they often say) a cracking good tune.

A great piece. These guys are fantastic. I really enjoyed the video log as well as the good bit of history. I really like hearing the progression of the band and then being given examples of the work. thanks, Robert (Manager) The Sunshine Factory

I would not be surprised if somewhere down the road, Robert - both The Depreciation Guild and The Sunshine Factory performed some shows together. Both bands have a meticulously crafted sound and share a similar sonic direction.

Guild again! I've seen them around here for countless times but there's always something new in their sound.

I *love* the video for My Chariot. I'm a geek/fanboy/maniac of Japan (being raised on Godzilla movies does it to you) and it's just grat. The music there is fantastic. The drumming- that's something extraordinary here, absolutely intense drumbeat (the drummer is Anton Hochheim, right)?

The same goes for the rest of their recordings. The band's got their haunting, moody style and are one hell of a pleasure to listen to.

nice work. as avp said - "ook with laser like technical analysis". :)
and i actually quiet like the son you posted there.

Lol, yeah the "Guild again" (what can I say - I dig 'em). This time, though I was asked by the great New York music publication - The Deli Magazine - to write a feature on them. Of course I was happy to do so.

Yeah, that's Anton Hochheim on drums. He's great. In addition to being a guitar player, however - Kurt is a drummer as well - so you can bet he was involved in the overall sound and design of this percussion track.

And how can you not love Japan in that video? It's everything to enjoy about it.

Mr. Smork, perhaps I'll add that to my resume - "laser like technical analysis"
;-)

Kurt's voice is so pretty, and the verse melody of "My Chariot" is exquisite. Another fine review, DC.

Good job, Dave. You hit upon key attributes of their sound. They're excellent in the studio and live, it appears.