I consider it my good fortune to have attended the Saturday night, February 27, 2010 debut show of new Brooklyn band The Telenovelas. In truth, I was more than just an "attendee" as I found myself pressed into duty as van driver and equipment transporter (otherwise known as a "roadie"). My friend and fellow journalist Lindsey Lawless is this band's bass guitarist and backing vocalist, so I was more than willing to help out wherever needed.

The show was held at Tommy's Tavern on Manhattan Avenue in Greenpoint, Brooklyn. A venue where some of Brooklyn’s best underground shows are presented a few times a week at this three-decade-old bar.

After loading in and setting up the equipment, Lindsey and I headed down the street to grab some food at the nearest Deli. As we are both cat lovers (each having our own at home) we were delighted to discover this Deli had their own cute furball, dutifully roaming the isles. 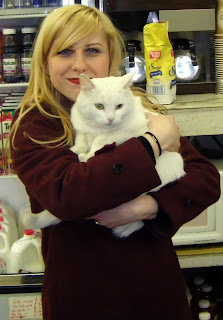 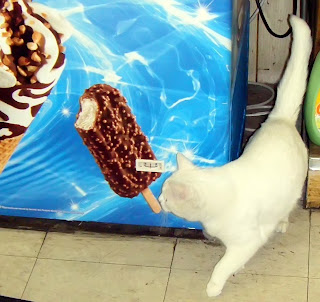 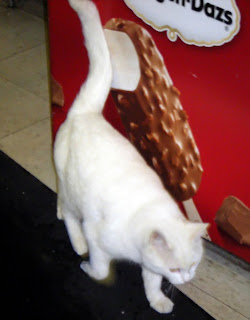 Snacks in hand, we headed back to Tommy's as the showtime approached.

As you push through the saloon-style swinging doors into the stageless back room area, you come face-to-glistening-face with the band moments away from playing, all under a pulsating lightshow. 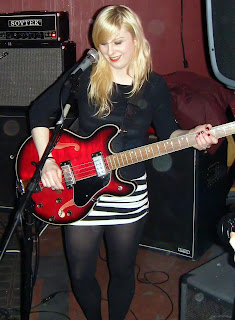 Lindsey looked radiant in a black and white ensemble. The bass guitar she plays is a hollow-body affair, allowing her to squeeze copious amounts of feedback out of, when needed. 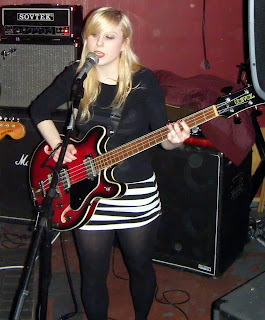 Linds isn't just another pretty face with a good sense of rhythm, however, as she additionally shows a knack for background vocals (and sometimes even taking the primary lines) that is reminiscent of Bilinda Butcher of the legendary My Bloody Valentine. 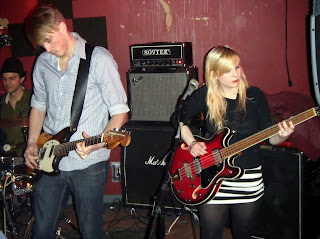 Positioned centermost is guitarist and vocalist Flemming Larsen who originally hails from Denmark. Flemming is a most capable guitarist, who has master the pitch-bend/whammy bar skills necessary to produce the particular sound this bands is offering. 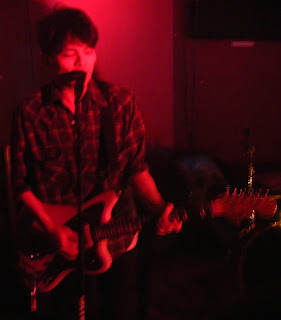 Slotted all the way to the leftside of the stage was guitarist/vocalist Richard San Luis. Richard provided a steady fusillade of guitar bursts and vocal stylings that stradled the line between careful practitioner and off-kilter madman. 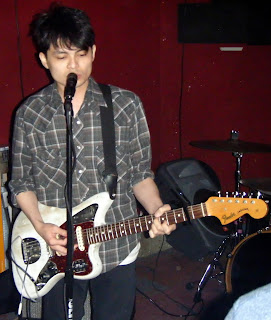 Richard gets intimate with his microphone 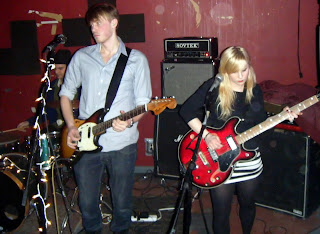 Flemming and Lindsey provided a rhythmic propulsion that was in equal parts delightful and risk taking. 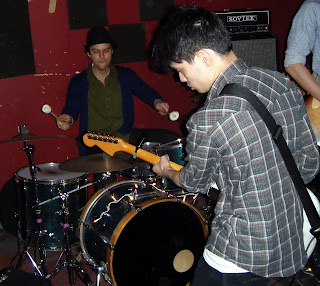 The thunder from down under was provided by the occasionally malleted hands of drummer Kevin Kahawai. Any band worth it's salt has a real, live drummer. Canned rhythms sound exactly like that - canned. Kevin had the right feel for the sonic forays this band embarked on. 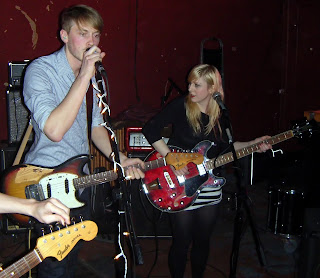 Listen in as The Telenovelas bring their particular sound to life:
http://www.youtube.com/watch?v=OsRjoov4_iE 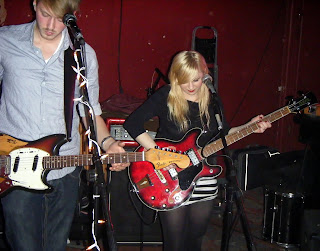 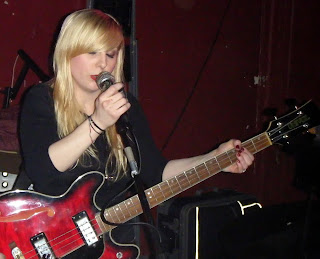 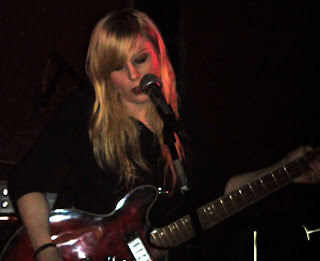 Listen once more - the band's big finale of the night: 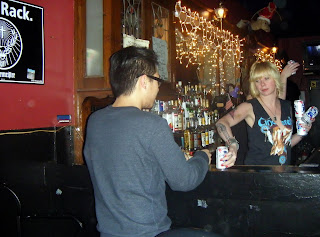 After the show we all hung out at the bar, telling stories, laughing and having drinks together. The bar tender was sweet and very cool.
I have high hopes for the Telenovelas in the coming months!

Posted by DaveCromwell at 4:09 AM

so dave became a real insider this time. nice way to do a good report and make some extra cash. :))))
anyway. it was an easy reading. lot's of pictures made that a pleasure... :) (a pic of dave behind the weal of the van would been great) :))))
i like your friend. she plays nice as well.
it took me a long time to decide weather i like them or not.... why, cause the music itself sounds nice, but i couldn't quiet get the words.... do they have any studio records?
and a cat in a deli store is bad - antisanitaric....
in conclusion - nicely done. :)

Glad you folks can dig what I've presented here. Yeah, I should have taken a behind-the-wheel-of-the-van photo -- next time for sure!

I agree wholeheartedly with Mr. Smork. A free-roaming cat in a deli is a poor idea, unless you like cat hair in your antipasto salad and rice pudding. And aren’t most cats free-roaming? One wonders what drugs the owners may be on. Of course, one needn’t take hallucinogens to expand one’s mind. All one has to do is read from this blog, and one’s vocabulary will be expanded. I’m always happy to learn a new word, and this time Dave introduced me to “fusillade.” (Although I should probably clarify that the word itself is probably not new, but was new to me.) Also, the captions involving microphone intimacy and the one “about a thing or two about a thing or two” were really quite clever. The band itself sounds like authentic shoegaze to me, and I wish them well in their sonic sojourns. I also like the coloring of Lindsey’s bass guitar. It matches one of the ice cream bins in one of the above photos. VERY well done, Dave.

Cool entry :)
Their music is really good, thanks for the videos 'cause otherwise we would never hear it (they don't have a myspace page!).
Lindsey is beautiful and the guys rock. It's a perfect music for, let's say, hanging out at saturday night, it creates a very enjoyable "good ol' rock'n'roll" mood.

And the cat is lovely ;)

A special thanks to Dave for cool review and also to everyone else for the positive feedback. Telenovelas will be playing more gigs soon and are excited to record and EP as soon as possible so we can get that Myspace running! Thanks again and stay tuned!
--Lindsey Lawless

Hey, I just want to add a little thing to this glorious article. You did a good job Dave! You can find Telenovelas music at www.myspace.com/telenovelasnyc