Any musician - be it a band or solo artist - who wants their music heard by a wider audience, sooner or later has go on the road. If you truly want the people to know who you are and hear your creations - then you must bring it to them.

So it was the case with the Alabama based band The Sunshine Factory. Having made a great record - it was time to leave home for a short while and bring their vision to a wider audience.

As is often the case (and if you've read any rock band biographies at all) you find out that things don't always go exactly as planned. Such was the case with the above mentioned Sunshine Factory - who's members I had made some preliminary internet-messaging contact with, after I was correctly pushed in their direction by a similarly inclined music afficianado. Yes, I am of course referring to the internet legend Danny Shoegazer.

So, in the midst of their first ever New York area show tour, The Sunshine Factory found themselves needing a place to stay for a night or two, while they played their final area shows. Of course I helped them out! They make great music and turned out to be the nicest people as well. 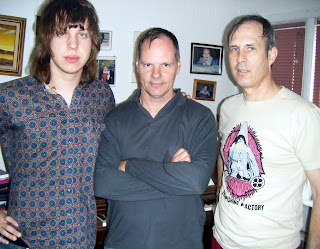 Here we are in my humble abode, taking our first day actual face-to-face meeting photo.

That's young Ian on the left, world-wise Robert in the center and yours truly (sporting a Sunshine Factory t-shirt) on the right. 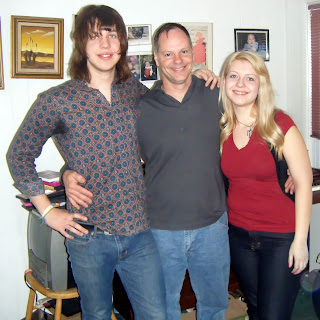 Along for the ride was "unofficial" member (though very much officially a family member) younger sister Allie. 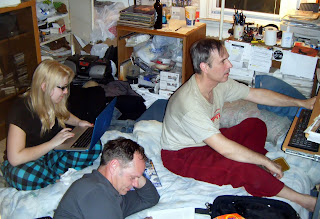 Accomodations at Chez Cromwell aren't 4 star hotel high style - but everyone is clean and comfortable. Look we all "surf the internet" together (though on different computers). Robert even read a book. One of my books. My rock biography books. OK, it was the Sonic Youth one (that I'm always quoting from and referencing). 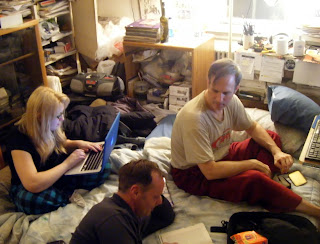 The room is upstairs from where I sleep, so I gave them plenty of space to chill out and sleep themselves.

Though The Sunshine Factory played a number of shows in a variety of locations, the one I attended was their Grand Finale performance at the Bushwick Music Studios in Brooklyn, New York 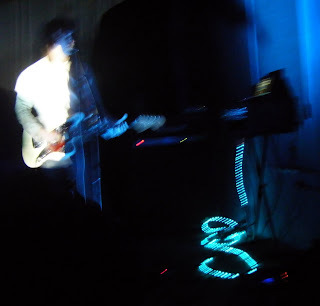 The band put on a stunning visual and audio presentation.

The actual live show consists of frontman Ian Taylor on vocals, guitar, sound generation and engineering. Robert Taylor writes all the lyrics and runs the live show projections (which are a visual tour-de-force). 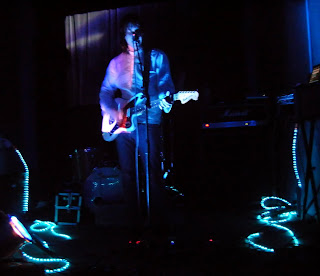 Check out the hypnotic drone of "Skin As Smooth As Porcelain" 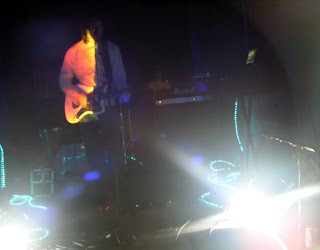 As can be seen by the video and these photos - it is a brilliant lightshow that accompanies the music. 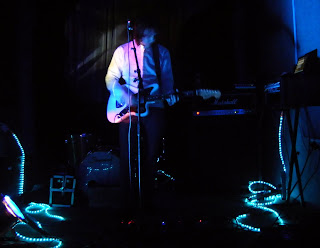 However its not a constant bombardment of seizure-inducing strobes and flashes. On the contrary, there is an equal measure of cool and delicate introspection. 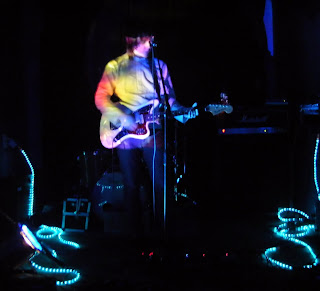 Ian is a most capable vocalist and guitar texture practitioner. With tone generated backing tracks reflecting the rhythmic sounds heard on the album, the performer is free to deliver vocals and guitarwork with cool precision. 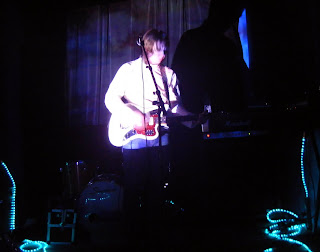 Listen in as The Sunshine Factory present a new song, called "Down": 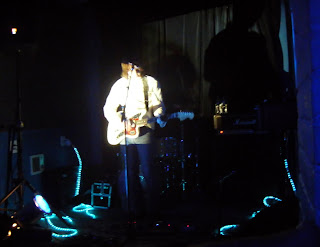 Without a doubt you can hear a strong My Bloody Valentine influence in the sonic textures and the way the guitars are presented. But it would be lazy and dismissive to simply state that this is all that's going on. The songwriting is structured and detailed, with distinct verse, bridge and chorus segments. 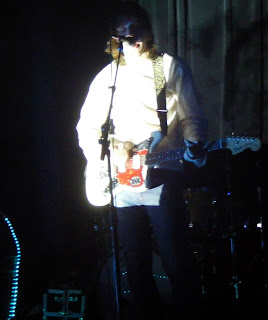 Of course those glorious Fender Jaguar pitch-bends are there. For the uninitiated - the Jaguar has a longer tremolo arm, allowing players to strum chords while simultaneously manipulating it by pushing it towards the body. This causes the chord to dip in and out of tune, often rhythmically in time. Combining this technique with heavy amounts of delay and reverberation effects creates what is known as a 'shimmer'. 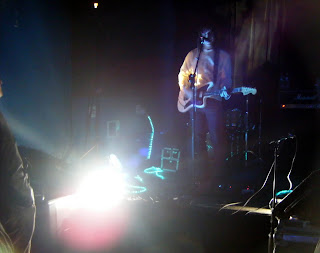 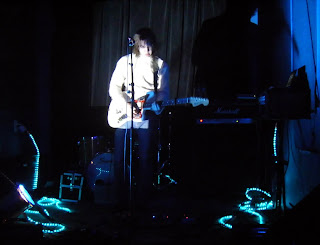 The Sunshine Factory are a bright, new emerging force in music, with a clear vision of who they want to be. Listen to their album and you will hear a lot more than "just shoegaze" music. Meticulous songwriting covering a wide variety of pop that shows thought and precision in its composition.

Posted by DaveCromwell at 4:52 PM

A really good band. I mean it. When listening to their tracks on MySpace/watching vids one can see that they plan everything carefully. Each element of the music and performance is in the right place, everything works like a clock. The music itself is very "colorful" if you know what I mean- it's cinematic, there's a lot of textures, it has a nice "chilled" mood. They should follow that path and build the fan base- people will apprecieate them 'cause they pay a lot of attention to the quality of what they do.

Thanks for all the stuff, Dave. It's good to see another new and creative band.

Glad you can appreciate this music!

I know the band will be pleased to see they are continuing to be heard by a wider audience.

Ian has a nice, soothing vocal delivery, and I really like the recording of "My Sugar Cane" a lot. Thanks to Dave for clarification regarding the Jaguar. It resembles the Fender Jazzmaster quite a bit. Note to self: must book a reservation at Chez Cromwell next time I'm in his neck of the woods : O )

You are more than welcome to come over any time, VFSD!

So now we have Cromwell the reviewer and rock star hotelier ? Where will it end ??? Hopefully not in scandal like that other well known hotel family the Hiltons. ;)

"welcome to the hotel of the cromwell" :)
but seriously - now you can rate your hotel of 3 or 2 stars as the amount of musicians has spent the night in it. :))))
i like the writing. was the one that has been read from the start till the end. i like most the part where some trick of getting sound trick....
like the idea of visualizations. seems like they are a cool gang. will check on their music later on tonight. ;)

Have to say it was a very hospitable and amazing place. We were grace to be among the privelege few who have been fortunate to have enjoyed its accomadation, I refer, of course, to Chez Cromwell' RT TSF