I first became aware of The Dum Dum Girls when I saw photos from their performance at this years just recently completed SXSW festival. I've always been a sucker for pretty girls with guitars so naturally I was intrigued. Making a mental note to "check them out" at some point I returned to my seemingly obsessive pursuit of music that is at times, hazy, harsh, melodic, noisy, harmonious, tuneful, edgy, long-windedly jammy, intense - basically anything that speaks to my emotional inner self. It just so happens that, these days - it's more noisy and dark music that does it for me. Well, it was that way in the early 1990's too. Which is why I'm always trying to find that particular lightning.

So, it was in casual email conversation that I discovered the band The Dum Dum Girls were coming to New York and I found myself presented with an opportunity to, in fact check them out in a live setting.

Off to Webster Hall - my fave New York City venue - on Saturday, April 3 to see what all the fuss was about.

The first thing I noticed was that great visual presentation which initially struck me. 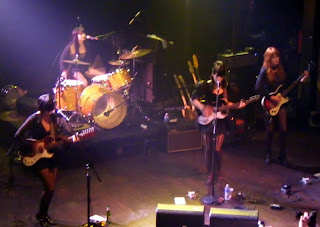 In the classic band look tradition, all four members had complimentary, yet slightly different stylings. All with dark hair, except for the bass player, who was red (or ginger, if you will). Even the guitars appeared to be color coordinated. 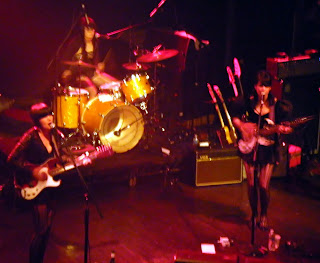 However it was their vocal sound that made even more of an impression on me. They opened the show with a cover of the classic Rolling Stones song "Play With Fire". In the cathedral-like big room at Webster Hall, it sounded absolutely amazing.

Have a listen right here: 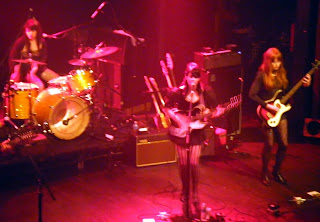 The various band pages dedicated to them list the members as Dee Dee on lead vocals and guitar (who is positioned center of the stage); Jules on guitar and vocals (left side of stage with stylish blunt bangs haircut); Bambi on bass (I'm beginning to suspect whether some of these are not their actual names) and Frankie Rose on drums. Now that name sounds a bit more familiar. 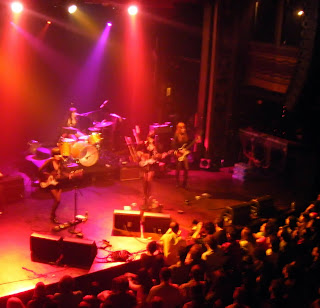 It was a sold out show at Webster, as the DDG's were supporting another band simply named Girls who have cultivated a sizeable following of their own. So there was certainly packed-house electricity in the air. 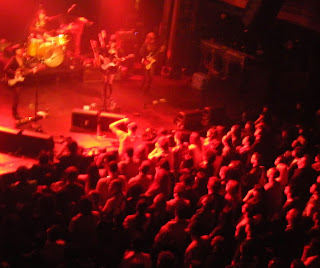 Making the most of this opportunity, The Dum Dum Girls proceeded to deliver an impressive set. 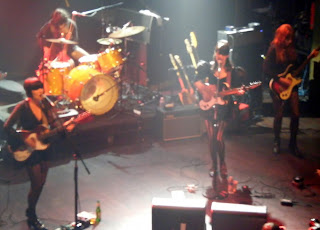 Soundwise, this song is particularly appealing in it's hybrid of west coast surf music and Ramones-style punk urgency. However, Dee Dee's vocals are far more musical than any "punk" record and I like the way she'll use vibrato in her voice at the end of certain sentences. 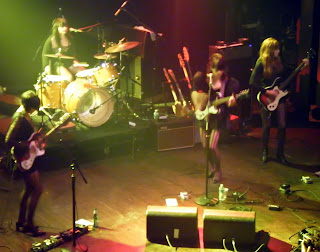 It really is their vocal sound that is the most impressive element. On the aforementioned "Play With Fire" they transform this classic into an even darker, slower more moody burner. The vocal harmonies and interplay between Dee Dee, Jules and whomever was on drums was a thing of beauty. Though I provide a clip that gives something of an impression, actually being there in the big, spacious and impeccably sounding Webster Hall (much credit to the soundpeople who, to my ears do an impressive job everytime I am there) cannot really be replicated on YouTube. Though after the show, that's all we're left with - so thank goodness for it. 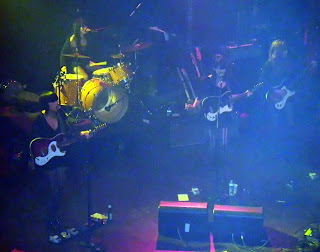 Frontperson Dee Dee does this attractive body movement sort of dance in place as she plays and sings. Moving back and forth in time with the music she pushes one leg forward then the other. Its almost hypnotic. It appears a natural, uncalculated reaction - something to help her lock into the song. What does appear "calculated" is the bands overall look. Having seen images from more than a few shows now, the ornate stockings the girls wear appear to be their signature look. Almost a "uniform." This puts a visual emphasis on their legs - which isn't a bad thing by any means, but certainly in a review of their live performance, bears mentioning. 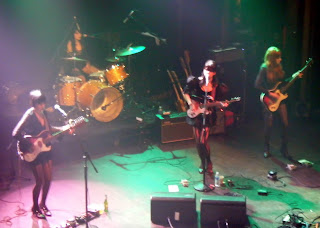 Moving efficiently through their set, next up was a song called "Don't Talk To Me" that had a breezy 1960's feel to it (parts Jefferson Airplane and Swingle Singers)

Listen for yourself, here: 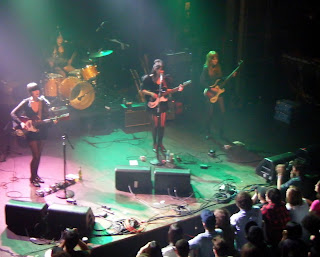 Live music is best when you feel it as well as hear it. Feel it not just emotionally, but by having the music overtake the surrounding space you are in, and wash all over you. With lots of layers that can drift in and out of focus. There are a number of great bands that do this with their instrumental sonic assaults. The Dum Dum Girls accomplished this with their layered vocal approach combined with Webster Hall's superior sound system. 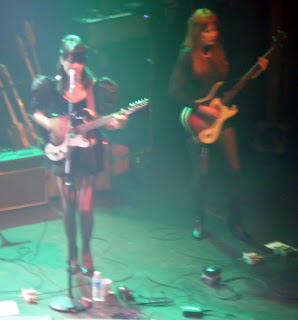 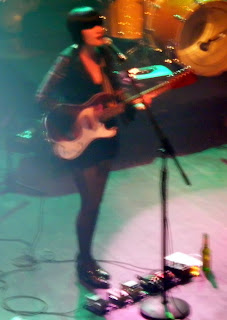 Jules is a perfect vocal compliment for Dee Dee. Additionally her guitar textures added the necessary punch when needed. 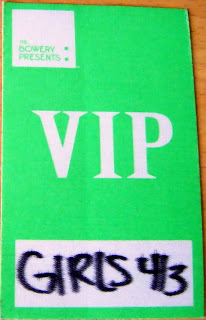 It's nice when you can get one of these. 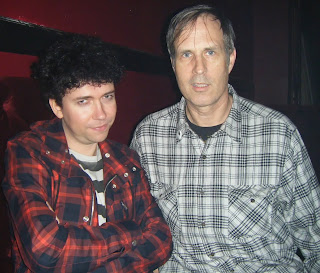 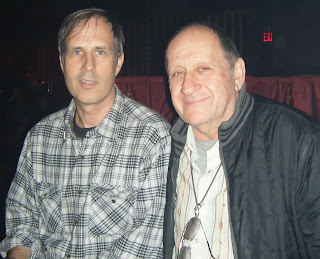 Actually, it was no accidental coincidence that Sune and Richard were there as Richard has produced The Dum Dum Girls just released full length album, and Sune is providing musicial guidance to the band.
Their debut album is titled I Will Be and I certainly recommend it.


Check out this wonderful performance here:

This song contains so many great elements that appeal directly to me. The verses sawing between two chords like the best Jesus & Mary Chain song. Dee Dee's voice pitched low and sensuous. A song about true love lasting. What's not to like?
You can find out more about the band and their latest album via the below links:

nice one, dave.
from your writing i get a feeling, that you don't know them well enough, cause usually when you introduce us with a new band you usually give us a almost full bio of the band and some facts about the band. ;)
anyway i like to read your "first touch" with this band. one thing i missed - dave's picture with band members that like dave's signature.... :)
about the band: is it just me, cause the vocals reminds me of irish icon band "the cranberries" vocalist dolores o'riordan?
apart that this band sound fun. didn't found that dark as they look at all. maybe some lyrics is a bit .... not matching the sound, but i quiet like this band. and read head as well. ;)

Good analysis, Mr. Smork.
Yeah, I didn't want to go the lengthy "bio" route as you can always find that sort of thing at their offical pages. Since I am just discovering them myself, I wanted to get down my honest intial reactions to it.
I like that you refernece The Cranberries and Dolores O'Riordan. I didn't think of that but yes, I see what you mean. That's what I meant about the vocals being much sweeter than traditional "punk" music.
There is a lot going on with these Dum Dum Girls!

Anouk - you say so much!

Again a great job.
What is the highlight of this entry is the fact that you're as new to the band as ony of us, the readers. At least I am new to the Girls. Pics and vids give a good idea of how the show looked and sounded like, with a hint of imagination one can easily "get there".
Their music is really good. It sounds a lot like some crazy blend of Raveonettes and Ramones and that's good since both bands are *epic*. And the vocals are unique, that's true.
You mentioned their looks. That's very true. Not only the girls look great, fantastic, lustful etc., but as a guy I would like to point my finger at one important, sweet little thing. Sexy girl on the stage creates a certain kind of 'pressure' for all the other girls, the 'real life' girls, to look as great as she does (the same goes for guys on stage and guys in real life). I think our times lack some kind of pressure for perfection that was so much alive in the past and girls like that are "saviours" of a good taste and style of a true woman. They are living manuals for every single gal on the world- a "model examples" of how they all should look like. And I love them for that.
Enough philosophy. Cheers!

Not really getting the Cranberries ref at all I'm afraid

After conducting scientific tests I still don't get it. Dolores' voice can be a quite shrill, urgent and rather like a wailing banshee on occasion were as Dee-Dees is full of sweet insouciance, a cool 'couldn't give a rats ass' type vibe, well that's what I hear anyway

I've already witnessed evidence that Andy does in fact sing the praises of The Dum Dum Girls. Nice to see them making such a quick mark on the music scene.