When two of my recent fave bands are touring together and bringing their show almost right to my doorstep (well, the East Village of New York City), then I have to attend.

So it was with Brooklyn's The Depreciation Guild and Oslo, Norway's Serena Maneesh - playing the final night of their cross-country US tour at (Le) Poisson Rouge on April 8, 2010.

As it turned out, a large percentage of my "music friends" felt the same way as well, and were in attendance too. In fact, in the venue for this night was a veritable who's who of indie rock and modern dream pop/shoegaze music makers.

In no particular order, various members of the bands The Ravonettes, The Pains of Being Pure at Heart, The Vandelles, Zaza, Soundpool and The Telenovelas could be spotted.

And why not? Both The Depreciation Guild and Serena Maneesh have just released brand new albums to both critical praise and much deserved fan accolades. 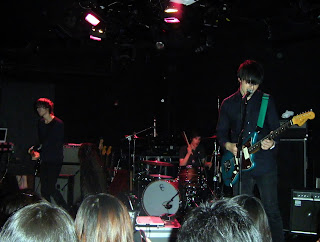 Opening the show was the never disappointing Depreciation Guild. With their latest album titled "Spirit Youth" providing a wealth of new material for the band to choose from, they kicked off the show with the opening track, "My Chariot"

Listen here to this shows performance: 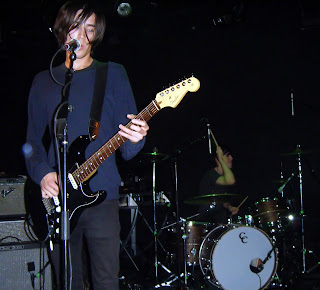 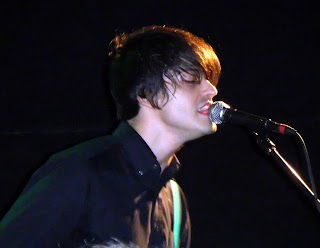 Lead vocalist, guitarist and principal song writer Kurt Feldman brings his vision to life with each show and recording. 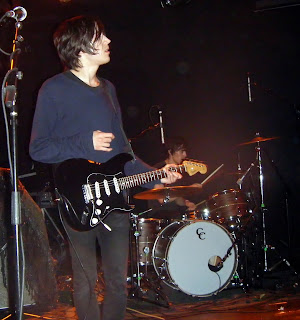 The Brothers Hochheim are as visually animated as they are accomplished musicians. 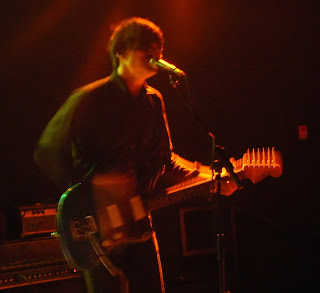 Kurt is the picture of etherial frontman, as this photo surely illustrates 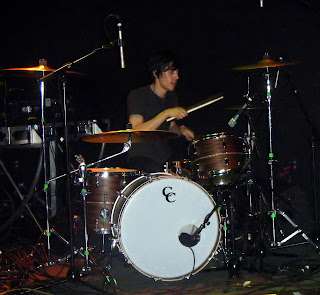 Anton's live drumming provides a looser feel to the songs, that might otherwise sound somewhat rigid, given the necessity of laptop driven bass guitar and keyboard assistance. 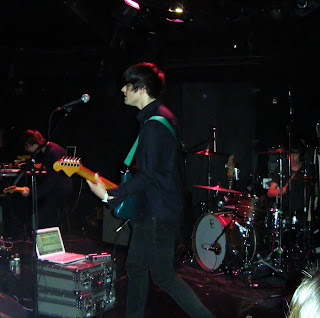 Much has already been written and discussed about The Depreciation Guild's tones-generated-by-famicon roots. The majority of that process has now been migrated over a more reliable laptop. This now allows Kurt the freedom to pour even more emotion and feeling into his songs, via impassioned vocals and intricate guitarwork.
The band's "live" chops were never more on display than in this redition of the final song off their debut album (In Her Gentle Jaws) and "Heavy Eyes"
See and hear:
http://www.youtube.com/watch?v=rTQsEVb07OA 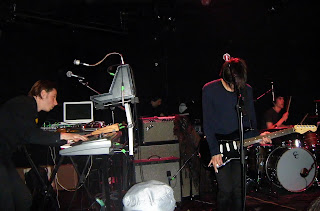 For their final song of the night, the band invited up now good friend and keyboardist of fellow tourmate band, Adne Meisfjord of Serena Maneesh to add live keyboards. It was an interesting and unique rendition of the band's brilliant "Dream About Me" which is also prominently featured on their latest album.
Go out and get "Spirit Youth"
Find it in all of these places:
http://www.myspace.com/thedepreciationguild
--

After a short break, it was time for tourmates and headliners Serena Maneesh to take the stage.
Having seen them twice in successive nights back in January (at The Mercury Lounge with The Vandelles and at Littlfield in Brooklyn with Zaza) I have become somewhat familiar with their live show. 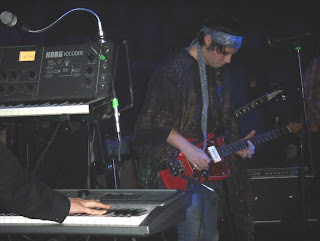 Fronted by guitarist and vocalist Emile Nikolaisen, the band plays a particularly unique brand of jammy, spaced-0ut stoner rock.
The opened the show with the lead cut off of their latest album (S-M 2: Abyss In B Minor)
Of which I recorded merely a portion of, here:

http://www.youtube.com/watch?v=WyoLEoWw8Ok
It's an amazing album track, full of wonderful sonic elements (side to side panning, perfect for headphone listening, lots of sounds quickly dropped in and out).
Live, it's a somewhat different animal. Although still very bass guitar driven, the keyboards and guitars are allowed to roam freely over top, creating an ever pulsating cacophony of sound, while Tommy's drums sizzle forward, in almost jazz-like patterns. 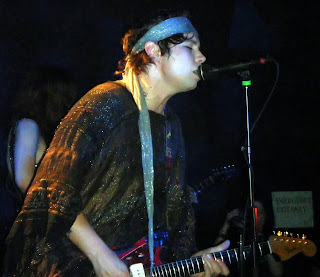 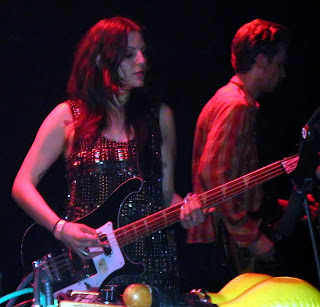 Filling in on bass for the final east coast shows of the tour was Jennifer Fraser, who plays in her own band Zaza. Jenny has an impressive resume of notable bands she has played with already, and I'm not surprised at all that her name was called when Serena Maneesh needed a temporary replacement for their regular long time bassist Hilma 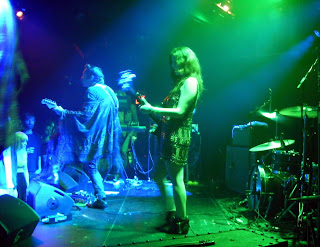 As I was saying, as good as their latest album is (and it is) their live show is someone of another animal. Here they let loose with a jam-and-noise feel that is part Sonic Youth, part My Bloody Valentine and something reminiscent of the crazed jams that went down at The Woodstock Festival in the 1960's . 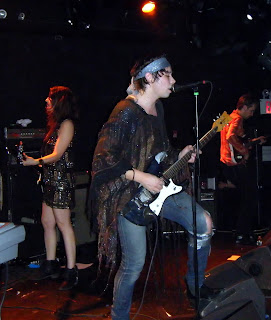 "You love that sugar," Emil sings in the hauntingly emotive "Melody For Jaama"
http://www.youtube.com/watch?v=pvwW8YUKyU8 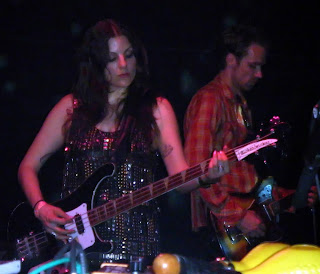 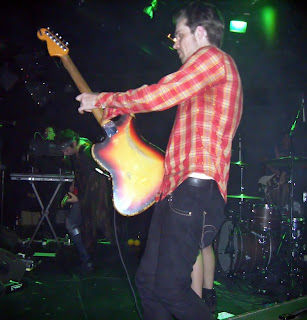 Second guitarist Øystein Sandsdalen brings a lot of the Thurston Moore/Lee Ranaldo feel to the band. 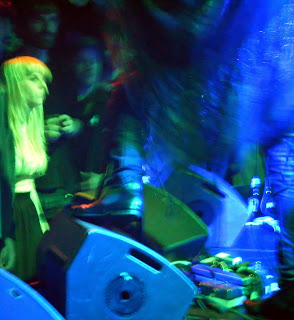 Blissed out fans couldn't get enough of the show. 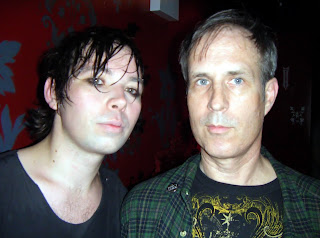 Catching up with Emile afterwards.
Final out all about Serena Maneesh and how to get their record, here:
http://www.myspace.com/serenamaneesh
--

Great review. You're lucky to have both of these bands playing in the same time in one venue.

And both bands are promising. I really like the sound of Depreciation Guild, they've got a kind of 'visual' quality to their music, it instantly brings pictures to the listener's mind.

But it's Serena Maneesh who are my type here- their uneasy, sometimes disturbing and mysterious sound is really something. I mean, the difference between both bands is like that- you can listen to the Guild and do other things, their music can serve as an 'enhancement' or 'addition' to something you do, a beautiful sound decoration that you don't have to pay your full attention to.
Serena's music is different in that matter- they 'suck you in' with their sound, they hypnotise and create a closed, intimate space. Both bands are good at what they do- I just think their goals are a little different. But that's the thing about music- there is endless variety.

Interesting thoughts on it all, spaceman. Thank you for that.
I'm glad you can get into both bands as they both have made a distinct impression on me this past year.

First - The Depreciation Guild - who's debut album - In Her Gentle Jaws - came along at the right time to create a perfect soundtrack for me - of longing and ultimate hearbreak.

More recently - it has been the (as you say) "hypnotic" sound of Serena Maneesh - who I had the good fortune of seeing three separate shows of them in New York over the last few months. Their latest album is amazing - as is The Depreciation Guild's "Spirit Youth".

Current soundtracks to my life.

Some day in the future - I will use some of your photos in a mutual-interest feature.

I think that would be totally cool.

Good stuff as ever, I have to admit to being technically inept, but your reviews are always accessible , even to a Luddite such as I ! Keep on keeping on, dude!

You're too kind, vonpip. I could ask the same of you (based on your considerable music review output and live show promotion as well). Anyway, sleep is overated.

nice review, dave. yeah... your sleep question appears in my mind as well... :)
nice review - written in your ond cromwell style. :)
the bands.... the first one sounds pretty cool - the guitar on their songs sounds great. although i understand why word depression is on the band's name.
the seconds band... i might be not that deep in that band as you are. but i am sure that they are something to see live.

Dave wrote:
"The Depreciation Guild - who's debut album - In Her Gentle Jaws - came along at the right time to create a perfect soundtrack for me - of longing and ultimate hearbreak."

Right, I know what you mean. To be honest- if I don't find a relation between a song or an album to something that happens (or happened) in my life, I will simply forget it, even if it's great. The same goes for movies and books- those that we claim to be our favourite are almost always closely connected to our deepest thoughts or experiences. It's as simple as that. So yea- the 'soundtrack to life' description for music is perfect, it nails the 'core sense' of what music should be. A kind of 'enhancement' or a 'drug' that takes our experiences to another level.