Saturday, July 7 proved to be the most action-packed day of the entire CBGB Festival.  Flush with the knowledge that Duff McKagan's Loaded was set to hit the outdoor stage in Time Square at half past noon, I soon found myself positioned front and center with the other rabid fans. 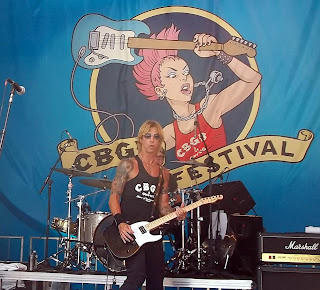 McKagan hit the stage on time and the scene was quickly transformed to a hard rocking atmosphere in the heart of New York City. 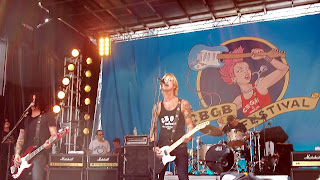 Duff announced the last time he played New York was at The Blender Theater in May 2009
(a show I happened to be at as well - see my coverage of that one here:
http://davecromwellwrites.blogspot.com/2009/06/duff-mckagans-loaded-05192009-blender.html 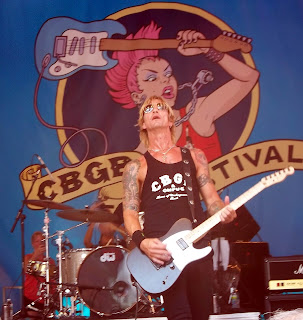 This time he said he told the Mayor the next time he played NYC they were going to have to shut down Times Square (which as it turns out, is exactly what was happening here). 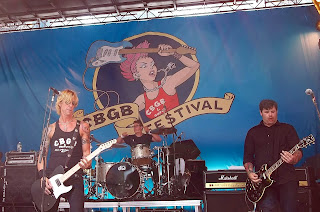 As expected, the band was super tight.  Leaning heavily on material from the most recent Loaded album. 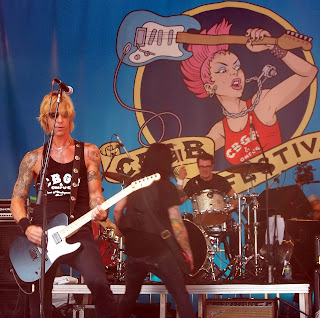 Duff talked about how special it was to him to be included in this CBGB festival celebration.  How he played  the original club with his first band Guns N Roses back in 1987. 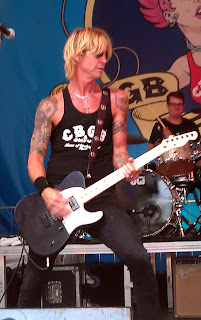 The man sounds and looks better than ever.  He personifies the best aspects of being a rocker - now from the perspective of a healthy adult who's passion for the music has never waned. 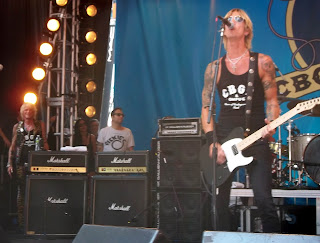 The dude in the left corner of the stage there (looking somewhat like a Duff clone) danced through every song played - and eventually made his way into the crowd with us to experience it all from the fans side. 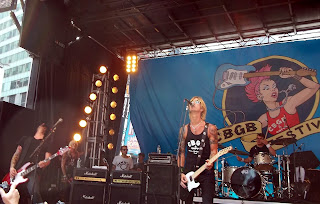 The band ripped out every song like seasoned rockers, pummeling the crowd with it's two guitar, bass and drums attack.

Duff has that easygoing stage presence of someone who's done countless shows.  Here he engages the audience in some amusing participation activities: 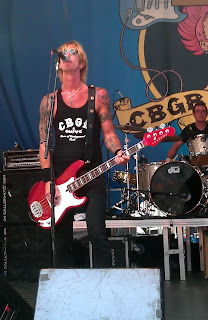 To play the classic Guns N Roses song "It's So Easy" - Duff swapped out the guitar he was playing for his trusty bass. 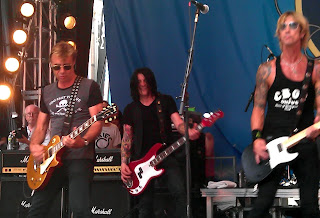 The surprises kept on coming, as original Sex Pistol Glen Matlock joined Duff and the band and proceeded to rock out in true Punk Rock style. 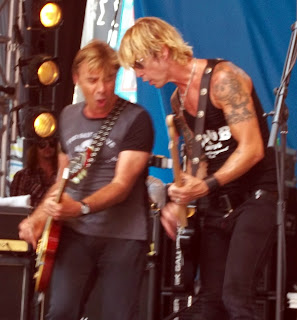 Though I was clearly too close to shoot any kind of decent sounding video (and I apologize for the inadequacies of my feeble device - those 'poping' sounds are really annoying) - I enjoyed shooting the images - including getting myself and some of the other revelers in - via the classic 360-sweep view. 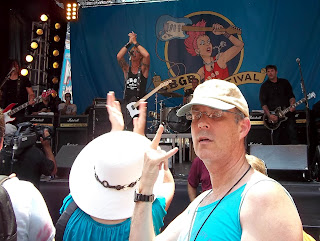 Duff on stage - Croms right up front.  Just as it should be. 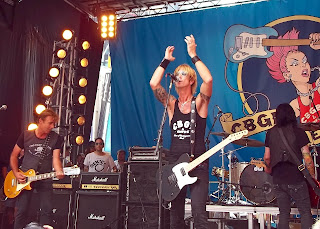 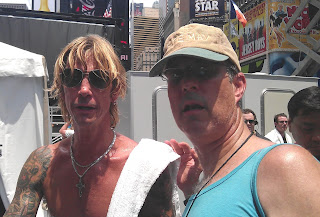 Getting to meet and chat with Duff afterwards ranks right up there with one of my all time special moments of coolness.  Simply put - the guy is a complete role model.  Cleaned up badboy.  Into fitness, writing and financial advice.  Those three things are a big part of MY life.  Yet he still rocks as hard as ever.  It would be difficult for me to find someone else that so completely mirrors where my priorities are today.

Totally stoked from this amazing first event of the day, my summertime "show bro" Rob the drid and I hoofed it over to the North Stage at 52nd street to catch 90's alterna-punks Superchunk 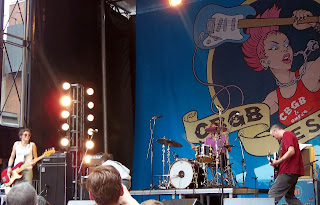 The band was already on, raging through their set.  So, we packed in with the crowd and immediately assimilated to the head bopping vibe. 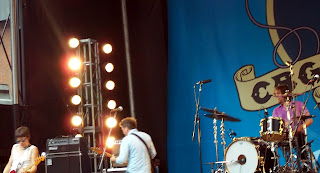 It was a great atmosphere there in the early afternoon.  The band was super tight and the audience seemed to know the words to every song played.

Check out their final song of the set, captured from the proper distance for a better audio experience: 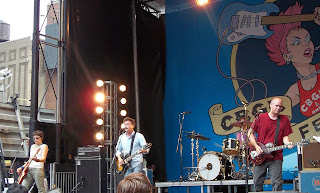 The Saturday portion of CBGB Festival was off to an amazing start!

With the Times Square shows now in the books, it was now off to Central Park and the big SummerStage shows.
Posted by DaveCromwell at 12:18 PM

nice. rockin' hard.
btw, where's that cap with you and duff together? did i missed it? :P

Yeah - the pic with me and Duff is in here. That's my fave one of them all!

Great work Dave! Cool photos and vids! I like the picture on the background (girl with guitar) Rockin' girl!! :)

Would have loved to have seen some outdoor stages when I was in Time Square ! Looks like a great festival and a former Sex Pistol their too ( no Dave Not you) ;) Excellent!

Yeah, Matlock showing up was a big surprise. There's a guy who didn't get his due at the time, but proved to be the creative one in retrospect.

Hey Dave, the "Duff clone" you referred to is Jimmy Webb from Trash & Vaudeville, he rocks as hard as the rest of us! ;-)

Glen and Duff playing together was a real treat! Glad I could catch this early show with you and start the rocking out of the last and arguably BIGGEST day of the CBGB fest. What, no mention of Duff's microphone troubles?! For everyone else, our good reporter here, Croms wildly waved and told Duff that his mic was screwed up. Duff! Get a new mic, that one sucks! You are great, man, but yea, you need a new mic. *Sound-guy trundles out and switches it on-and-off for Duff* No, don't do that, just get him a new mic!!!! Duff thanked Dave with a "Who says New Yorkers aren't helpful. It was a special moment.

I knew this show would be a blast - and it was. But then it got even better with the appearance of Glen M.F'n Matlock! Definatley one of the highlights of an amazing weekend. Glad we could be there to enjoy it with you!

Thanks for filling in that info, eembee. I thought that guy was pretty cool.

drid, so nice of you to add my "Newww Yawker" moment with Duff (from audience-to-stage). I was just "inspired" ;-)

Hey NYCDreamin - it was way cool to hang with you at this show. Summer in NYC is absolutely the best for free live shows!

Can I just say what a aid to seek out somebody who truly is aware of what theyre talking about on the internet.important link You positively know find out how to carry an issue to light and make it important.important site More folks need to read this and understand this side of the story. I cant consider youre no more fashionable since you definitely have the gift.
very nice submit, important source i definitely love this web site, index keep on it