The later afternoon portion of Saturday July 7, consisted of a large free outdoor concert at Summerstage in Central Park featuring Guided By Voices, The Pains Of Being Pure at Heart, War On Drugs and Cloud Nothings.

After summer concert bud drid and I hoofed it over to the Park from Time Square - and then going through the necessary checkpoints to get wristbands, photo stickers and whatnot - it was time for more music!

First up was Cloud Nothings 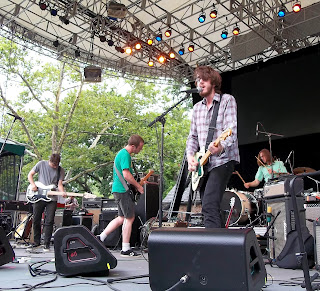 Originally conceived by frontman Dylan Baldi as a solo home recording project, the rapid evolution of this band has seen it go from shorter power-pop songs to all out psych jams – especially during the live shows. 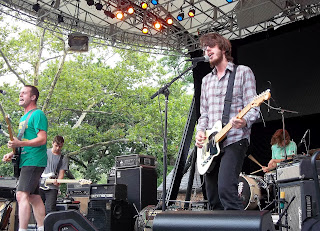 The set relied heavily on material from their latest (Steve Albini produced) album
"Attack on Memory" - much to the delight of an attentive audience. 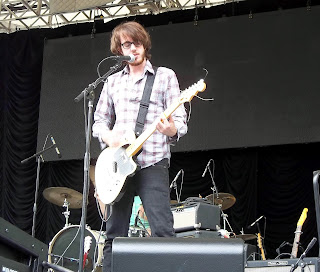 Baldi is your prototypical twenty-something, slacker-styled frontman.  He has a likeable enough personna, but no one would ever accuse him of a dominant stage presence. 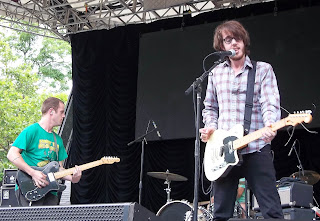 The singles this band has released over the last two years have been catchy and always a pleasant re-discovery when coming across them on my iPod - but it was the live jamming at this show here that really impressed me.


It may be true that this particular extended jam was partly responsible for Dylan needing to swap out a bum amp mid-song - but nevertheless, the opportunity allowed the rest of the band to really stretch out.

While we waited on the changeover, drid and I attempted to soak in the overall festival atmosphere on what was an extremely hot afternoon. 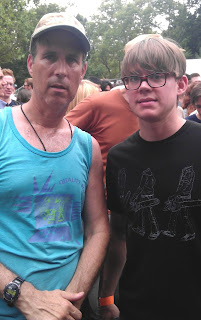 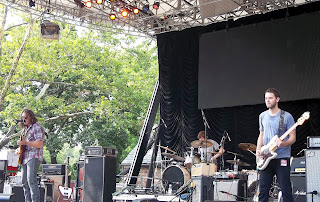 Though often described as "indie rock," they came off more stoner-rock on this afternoon.  This shouldn't have been much of a surprise, as none other than Kurt Vile himself was once a member, before heading out on his own. 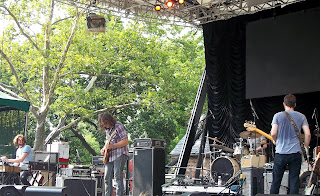 The Philadelphia based band currently consists of frontman/guitarist Adam Granduciel, David Hartley on bass, Robbie Bennett on keyboards and Steven Urgo on drums. 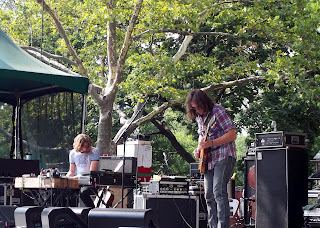 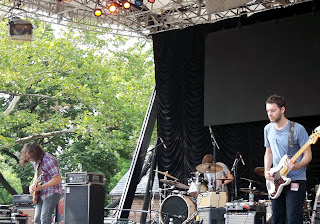 Most impressive this afternoon was the bass playing and deep pocket layed down by David Hartley.

Which can be clearly heard in this live clip here: 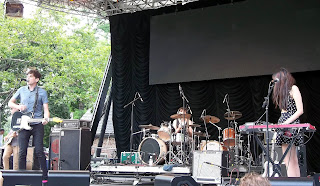 Attending a TPOBPAH show is always a little more special for me, since I'd been following them for well over four years now. 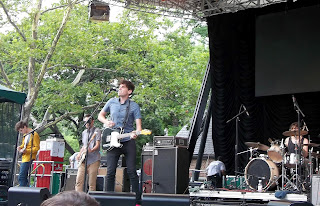 Since those humble beginnings the band has grown into an international attraction and has toured the globe extensively. 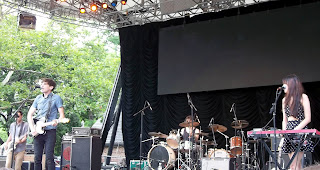 Having seen them first as a non-headling act at The Cake Shop; through their dizzying rise in popularity with a featured show at South Street Seaport; then a triumphant headline show at Webster Hall; and featured act at South By SouthWest at that Austin, Texas Festival - made catching their current show here all the more gratifying. 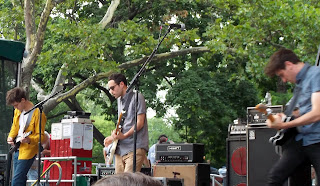 Kip and Alex - the founding members - are strong out front on guitar and bass respectively.  Previous live second guitarist Christoph has moved on and a very capable replacement has been found (former Drums guitarist as well). 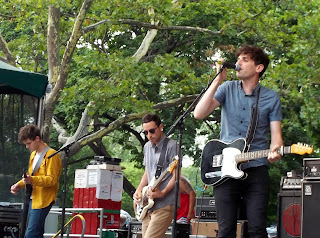 The new guitar textures adding a fresh feel to the overall sound. 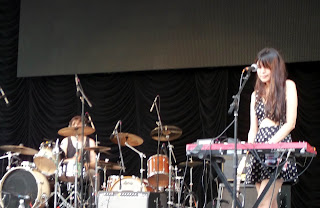 Kurt and Peggy on drums and keyboards respectively - essential core members as well. 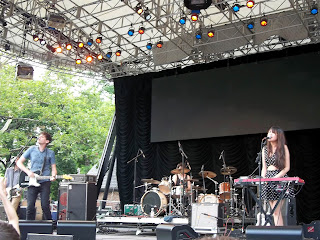 The band played a very energetic set (they actually ran out from behind the stage and grabbed their instruments).  Talking to Kip afterwards, he told me they wanted to play "only fast songs" for this show. 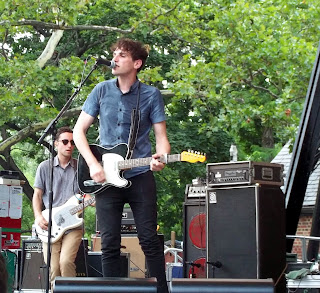 Alex (bass) Kip (guitar) - playing with the relaxed professionalism that can only come with having done so many shows. 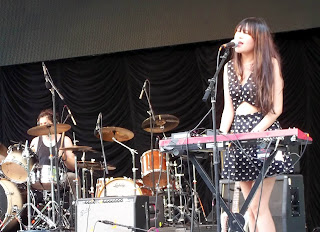 Peggy adds the feminine charm to this band of boys.  She sings great, looks wonderful and has a sweet personality that shines through her performances.  Just the right amount of keyboard backing too - giving the band (at times) a "Cure" sound. 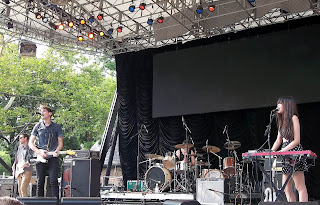 
Before the final band was to come on, I checked in on the side stage area - and ran into an artist I've known for a little while - and who's work I really admire. 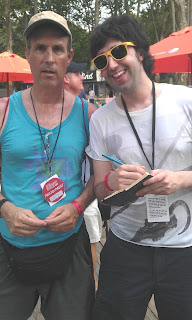 Hanging out and having a great chat with Eytan of his excellent band Eytan & The Embassy was a great way to stretch out and relax a bit between performances. 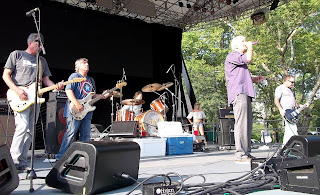 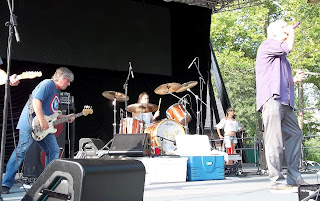 The band rocked out hard, playing over an hour long set. 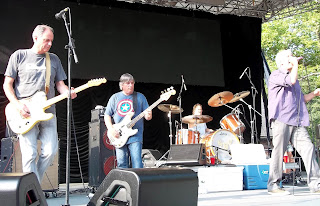 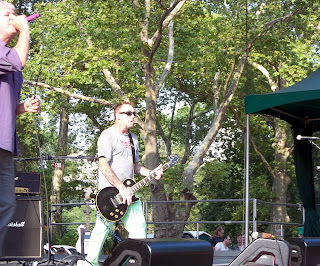 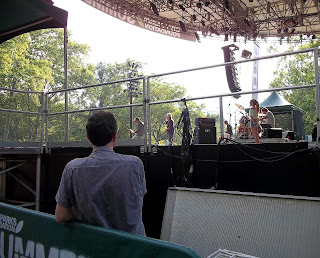 A member of the previous band on, taking in the GBV show from side stage 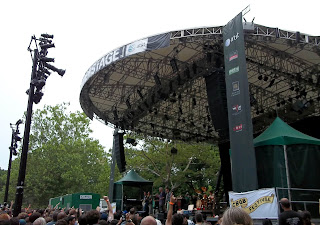 Big Stage - The SummerStage!
Posted by DaveCromwell at 7:12 AM

War On Drugs and PAins are both awesome bands- appreciated their stuff for a good while now and a lot to like about them! And hey Eytan is always great- and a great guy, looking forward to hanging with him in NYC too!!

Central Park ? And No Simon and Garfunkel ? Looks a great end to an ace festival.

As soon as I saw The Pains Of Being Pure At Heart were performing at this show - I knew I had to attend. Getting the other three bands just made everything that much better. And yeah - Eytan is a super talent.

Hot fun in the summertime!

Great one Dave, as always. I like "The Pains Of Being Pure at Heart" cool song. :)

Yeah, that TPOBPAH song "The Body" has really grown on me. Great lyrics and wonderful melody. Another perfect pop song from them.

cool! lovely review and such great photos exploring so many faces! thanks for sharing!

Great one Dave. I really like how the photos illustrate your text.

The photos actually help me recreate the day and inspire what I write. It's all about this great music here.

The stoner rock for the everyman made me laugh. The bassist of that band was the only moving and shaking part of that band's performance for me, just saying.

I need to see Pains play at a smaller, cramp-ier venue next time, I think I would love them even more than I did last Saturday at this show. They were amazing no doubt, interesting little tidbit from Kip. I'm glad you are here to get to the bottom of these things for us!!!

Guided By Voices was the main highlight for me, and while they did not play the one song I was hoping for, they did get a good run of some of the older tunes, on top of their more recent output on Matador. The cigarette girl, constantly lighting up smokes for Mitch Mitchell, to aid him in riffing and chain-smoking his way nonstop thru the set, I dunno. I found her a bit distracting up on stage. They played a long set, so all in all. We made out like bandits with all the free music that day.

I actually thought the "cigarette girl" added some much needed visual relief. No offense against the boys - but a bit of balance was needed and they seem to understand this.