It often feels like a relentless quest at times - to hunt down music of above-average quality. With every form of media and social networking outlet constantly presenting one thing after another (a good portion of it delivering only mediocre results) - finding a gem in the mix is always a cause for celebration.

Such is the case with the band Sick Of Sarah

Having been made aware of them by virture of a promotional photo and advertisement projected on a video monitor, the quest to hear what this band was all about began.

Procuring the album led to a wonderful discovery of some truly inspired songwriting. That coupled with a studio mastery of their album titled 2205 (the address of where they reside) - and in general the obvious command over their respected instruments and voices, led to a desire to discover more about who they were and what made them tick. 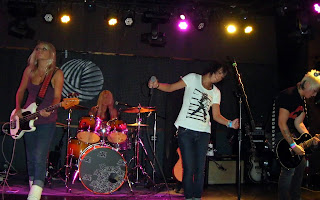 Discovering they were to play a show at New York's venerable Knitting Factory on August 18, 2011, set the wheels in motion. 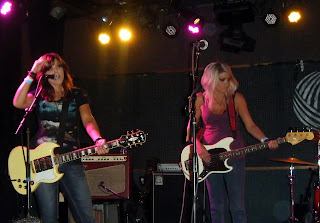 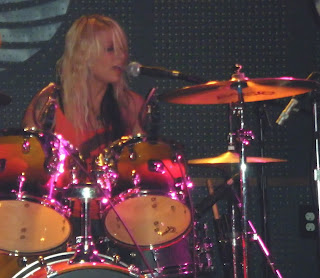 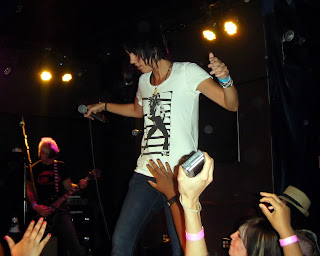 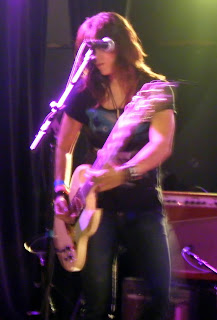 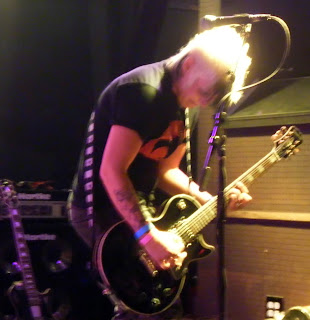 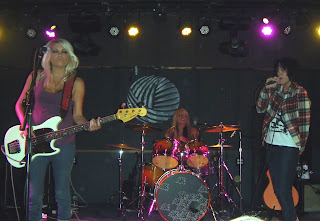 Jamie on bass - her "newscaster" hair has a hypnotic effect on fans. 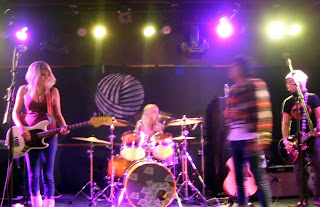 Catching up with the band prior to their performance,
an interview was conducted in the "green room."
------- 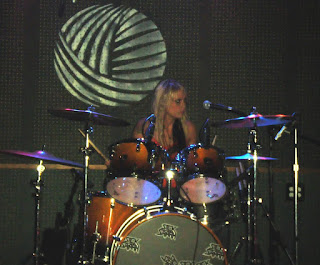 Jessica's background vocals are as important to the band's overall sound
as is her solid, forceful drumming. 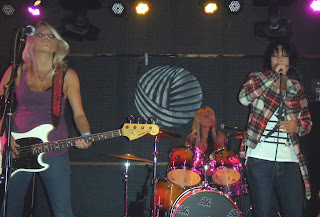 Sick Of Sarah continue that tradition of "girls in a rock band" that was made so appealing by Joan Jett and her first band The Runaways - right up through Sleater-Kinney and current acts like Wild Flag. 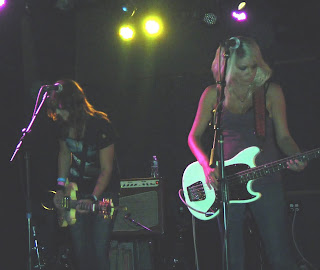 And like those bands, there is a level of androgony involved in both their image and fan base. 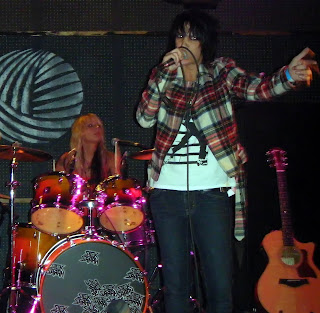 If boys in bands dressing in a way more often associated with what "girls" do has been going on for decades, then the flipside of that is women dressing in "mannish" ways. Of course, girls have more or less been doing this to various degrees for years. Look no further than the classic jeans, t-shirt and sneakers ensemble for evidence. Perhaps that look could be more accurately described as "androgynous" - having no distinct sex classification at all. 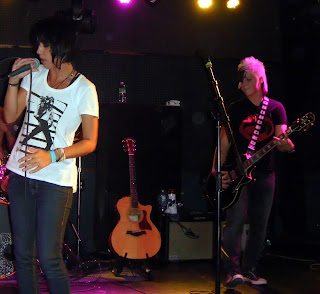 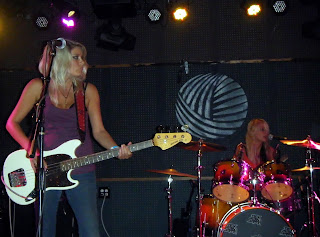 If Duff McKagan and Steven Adler (circa 1987) had female doppelganers,
you could make the case for these two. 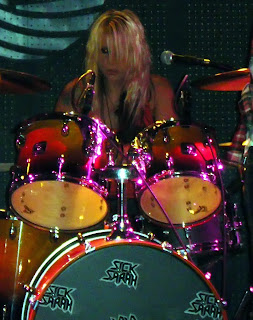 Jessica throttles the toms and looks great in the process. 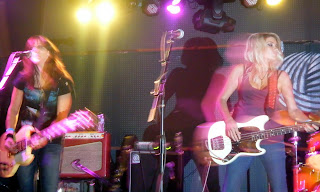 Katie and Jamie provide visual motion with their sonic attributes. 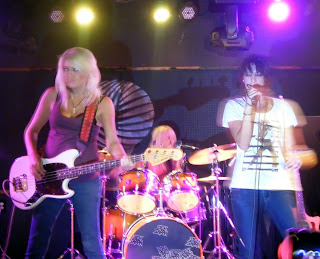 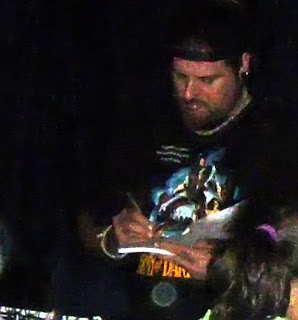 Tour manager and all around accomodating guy Corey attends to the business at hand. 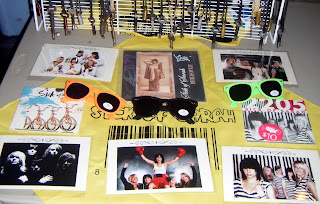 Which, among other things, involved handling the band's merch.


Part 2 of the interview progresses further, to both amusing as well as informative results. 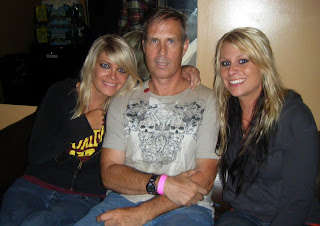 Never pass up an opportunity to take this kind of photo. 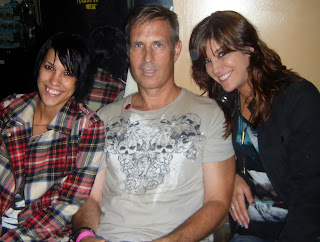 "That interview guy" makes the most of this encounter. 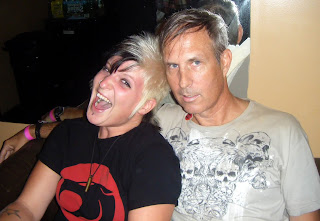 Jesse strikes an entertaining pose, much to this reviewers delight. 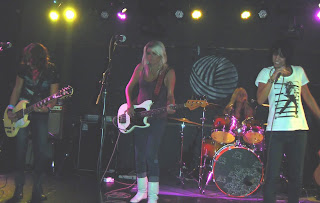 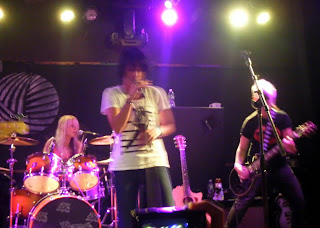 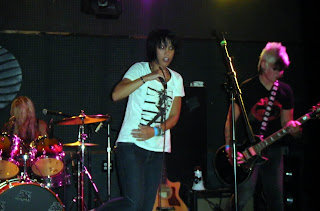 This quote below pretty much sums up what an encounter with these ladies is like:

“It was an absolute treat touring with SOS this year. They are fun loving, open- hearted girls who play irresistible punk infuse...d pop music with a passion that is truly contagious… The girls are hilarious and wild, and have a charisma and chemistry that I found to be utterly charming..... I think you will too!” -Susanna Hoffs (The Bangles) 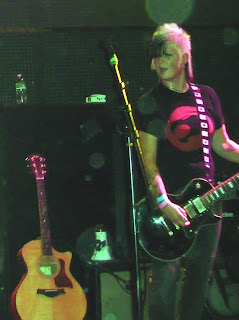 Another respected rock legend has this to say:

“Sick of Sarah is the real deal. This is a true working band who sing write and play for real. They are also cute and funny. They are my friends and they rock.” -Nancy Wilson (Heart) 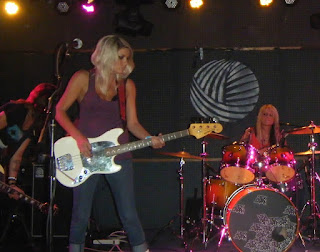 "charisma, chemistry and charming" - these are undeniable facts. 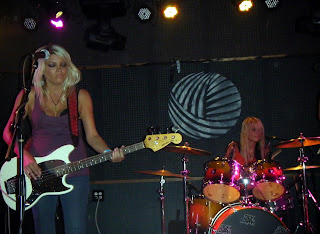 Because links are always useful:

Addtional videos from the Knitting Factory appearance can be found here:

Posted by DaveCromwell at 7:17 PM

"It often feels like a relentless quest at times - to hunt down music of above-average quality."

YES. Finding it is like when Link opens a treasure chest in Legend of Zelda!

Excellence as per usual.

ooh, nice piece mr. cromwell.
you know i most enjoy interviews, so as soon i discover them i might lost some text you written. :)
been checkin' this band since you mentioned them on your fb. and even they try to look like the joan jett (mostly main singer) i think they sound different though lyric dot some impression from that not by they repeating, but the way they were wrote. and it is kind of unique and good in my opinion.
dig 5their sense of humor and knowledge of bands i like ;)
and even there are 5qute girls in the band i kind of like katie most.... (don't know why i always like one more then others). she's seems smart, gets humor, and pretty to...
anyway - good piece dave. :)
feel the free! ;)

Just from my relatively brief encounter with them (one evening only) I got the impression that Katie was the most responsible member of the band. She was the first to come out and greet me (after I made contact with Corey, their tour manager). When you watch the interview, you can see that Katie is the one to help "organize" everyone, and bring the discussion back on point. I think she and Jesse are probably slightly older than the other girls (just my impression as I don't know their actual ages) and have a bit more experience with interviews and things like that.

Great read, as always Dave! I was lucky enough to see Sick of Sarah on this year's Warped Tour when it hit Hartford, CT...they were one of the first bands we saw that day, and they set the mood for the rest of the festival. Keep the awesomeness coming!

They have a lot of footage from their Warped Tour shows, Davey. So cool you got to see them on it. Wish I had gone now. Yeah, check out their own YouTube channel for plenty of amusing backstage and around-the-grounds footage from the whole Warped Tour experience.

Your interview was informative yet flirty - though i would have preferred some more probing questions such as "What is your favourite peanut butter?" and "Why are you sick of sarah?" "is she a bitch?"and so on- i feel that would make the interview less douchey, altho it already is not very douchey

Lol William. You amuse me with your commentary ;-)

But you are not off-base in your "Green Day/All Time Low modern "emo" rock kinda thing" assessment.

Yeah, El Paso Blue is a real good one, Paty. The whole album is, actually.

great review Dave as always!! those photos are brilliant!! and I agree with Paty - Paso Blue is really cool!!!

Their 2205 CD has some fine stuff on it, and from this post it appears that their shows are exciting. Once again you did an excellent interview and photo/video shoot. In the summer of 2008 they were briefly Moggers, even posting about a few other similar groups, Following (back then it was call Trusting) some of us, and actually commenting once. Two early songs of theirs that I have a strong weakness for are "Not Listening" and especially "Hello Good Morning," the latter they didn't promote with a video for some reason. Do you remember if they performed it at the Knitting Factory? The age-ed part of me felt hip to be mesmerized by a new cutting-edge rock track by a new young band and by convincing myself that I "got" it better than they, the creators, did. Since I haven't followed them, I have no idea if they actually ever underestimated the song, but it's a fun fantasy. On maybe the sixth page of a Google search for the song, there's an indienation.fm interview with the group that includes the track, so maybe it's been a hit.

A very good introduction to this band, Dave.

The music itself is not really that distinctive from the rest of shoegaze/rock/pop rock things we can hear today but thanks to Abisha's voice the band is instantly recognizable.

I still got to watch the interview but nevertheless I enjoyed this entry.

got to join mr with fancy royal name, about the questions you could of ask them, cause i'd be one of those who would be interested. :)))))
but don't get that "green day" thing. i admit i am hardcore green day fan and i don't see much similarities with sick of sarah... only similarity i see is main vocalists make up... :)))

For the Knitting Factory show, I would say they played 99% 2205 material. There was one (maybe 2) songs I didn't recognize.

As for comparisons to other bands - they exist only to further the discussion. More often than not, simply a reference point to move forward from.

Excellent stuff Mr C. Really enjoyed the video interview with the ladies too.

And hey can't blame you for making the most of the encounter ;)

If "every picture tells a story" then every face-to-face video interview brings it all back home, live and personal.

That three-dimensional experience is worth a thousand written words.