It's often an enlightening journey to trace the roots of musicians you discovered at the point in time you did.

Such is the case with the band Pop Threat. Having become aware of the principal musicians involved during their second phase with The Manhattan Love Suicides - through their present incarnation with The Blanche Hudson Weekend - I was intrigued to hear they would finally be releasing a retrospective CD of their earlier bands works. 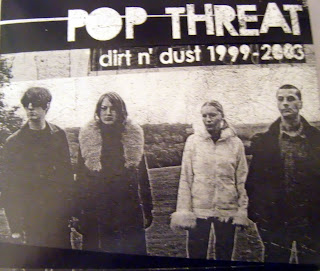 What saves previously unreleased album opener “One Track Mind” from the potentially monotonous experience that a “one chord” composition might suffer from is what’s moving around it. Specifically, the descending bass line and vocal “do – do, do do’s.” Then there is the power charged doubletime stomp section the song keeps going back to. Everything about this song suggests forward motion. You most-likely wouldn’t even be aware that it’s “only one chord” – if it hadn’t been spelled-out in the liner notes.

The wonderfully titled “Sugar Fuck” comes at you with explosive guitar chords, whose bombast make listening to Caroline’s vocals not as easy as your typical pop song. 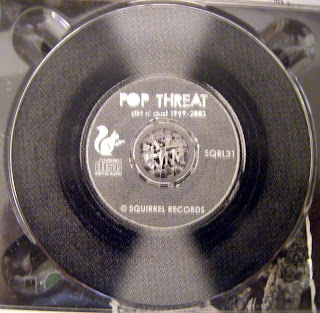 Four complete tracks from the album can be heard here:
http://www.myspace.com/popthreat

“Ripen” has Caroline more prominently featured and sounds more like the wonderful pop music of Tracey Tracey’s Primitives and the lovely English pop of that era. Caroline’s voice is up close in your ear, creating a pleasantly intimate listening experience. The repeated vocal refrain of “I wanted to be somewhere else” is catchy and charming. Darren’s clean guitar sound hearkens back to prime era Cure. There is also a long single keyboard note (played by the band's drummer Mick) that provides additional texture. A spoken word section of the song is accentuated by Darren's guitar noise run through a fuzz pedal and placed further back in the mix.

“Monochrome” (8 track demo) is full on razorbuzz guitar, 4/4 thunder drums with Caroline’s unmistakable vocals, passionately delivering a lyric heavy story. It’s overall mood (and power) is not dissimilar to what A Place To Bury Strangers frequently do.

The amusingly titled “Sludgy” is actually not really as much of a sludge-fest as one might expect from this name. The vocals, guitar, bass and drums can all be heard rather clearly. “It’s easier just to shut my eyes, than to watch you slide” is Caroline’s repeated vocal hook. 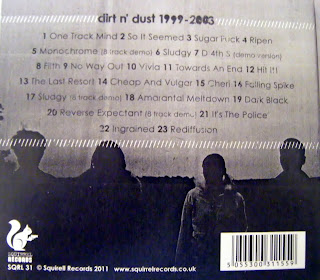 “D 4th S” (demo version) finds the band dipping into the experimental waters first explored by The Velvet Underground in the late 1960’s – and then again by Brian Eno during his pop solo career in the 1970’s. The warbly guitar work is prime “Taking Tiger Mountain by Strategy” era – specifically “The Great Pretender.”

“Filth” is a sheer wall of buzzing, hissed-out guitars filling all the open spaces of the sonic spectrum, while clean bass and drums throttle the progression forward. On top of that is Caroline’s un-effected lyrical recitation. The occasional pause, then guitar driven restart points towards the bands self-admitted Sonic Youth influences.

“Vivia” takes the pop song progression and twists it in unsettling ways by way of the guitar sound choices. Alley cats howling late at night might be one way to describe it. Meanwhile the vocals trudge forward, oblivious to the sonic subversion going on all around this otherwise straightforward pop song. 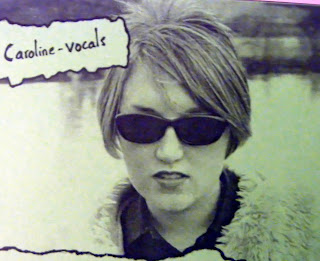 “Towards An End” has an opening narration taken from the 1950's film "Yield To The Night" – something that has become a recurring occurrence on Darren’s music – that, if anything, is used even more today with his current project – The Blanche Hudson Weekend. The sampled vocal clip is from Diana Dors (who, I've been told was England's answer to Marilyn Monroe). The song itself is a beautiful piece of gentle pop, with Caroline’s soft vocals as the dominant focus. Keyboard synth strings are initially the strongest musical presence – ultimately giving way to guitar textures that slowly rise up in the mix.

“Hit it!” is a smile inducing shorty that encompasses the rawness of The Ramones, with a “do, do, do do” vocal passage that’s pure JAMC.

The added white noise textures of tv static finds its way onto “The Last Resort” (because the band felt everything else was a bit too sweet). This certainly roughs up what is an otherwise clean and straightforward pop song. The structure shows thought and care, however, as there are some interesting chord changes and tempo shifts involved. 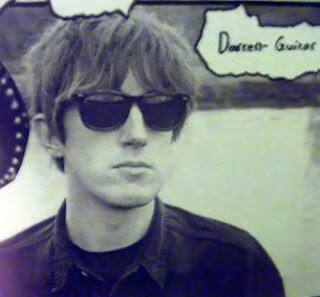 “Cheap and Vulgar” is fast and furious, capturing the energy that only live-in-the-studio can produce. The raw, aggressive punk feel of Iggy & The Stooges (Raw Power era) is fully represented here (especially in the slashing guitar chords and shouted vocals).

“Cheri” shows Caroline presenting the kind of lyrical story about some lost waif that would also become a recurring theme through the songs of Manhattan Love Suicides and currently with Blanche Hudson Weekend.

“Falling Spike” brings back the anthemic and glorious, with those ever satisfying “do, do, do do’s.” Of note is Darren’s guitar tone, strumming and chord selection – which brings to mind the playing of John McKay on Siouxsie & The Banshees first studio album “The Scream.”

“Sludgy” returns, this time as an 8 track demo version. It’s even less “sludged out” than the earlier studio version and pretty clear to listen to. Caroline’s vocal hook refrain is catchy and tailor made to sing along with. 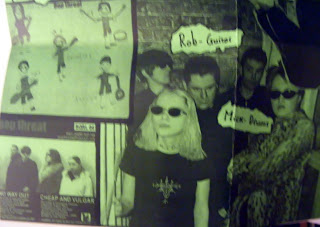 “Dark Black” comes at you with the lyric “there’s a fine line between hate and hate she said.” Surely this is a much finer line than the one between clever and stupid. Violins, violas and other plucked instruments appear on this delicate number, showing a depth and range within this band’s compositions that one might not expect, based on their other recorded works.

“Reverse Expectant" (8 track demo) is a straightforward rocker that employs the sound of glockenspiel plinks (currently in vogue again now, due to the popular band Cults use of them on their latest album). It’s true that this instrument adds an uplifting sonic texture. Other sounds emerge later on in the song – theremin-like squiggles for instance. 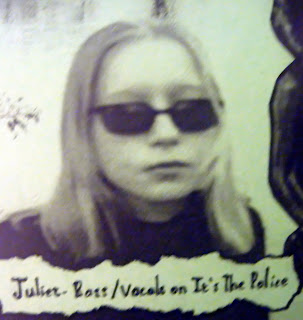 “It’s the Police” brings back the chaos via shredding guitars and shouted, obscured-thru-megaphone vocals (delivered this time by the bands bassist Juliet). It’s a trashy raveup with equal parts Sonic Youth and early Iggy & the Stooges spirit.

“Ingrained” comes at you with clean guitars and easily understandable vocals. “The best is over now,” Caroline sings. The more experimental guitar work returns for the chorus, however.

With that, this wonderful collection of songs is over. 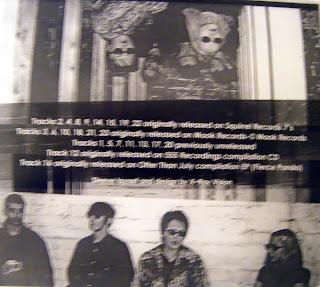 For anyone who has ever loved the bands I mention in this review (and quite frequently in general) – the Jesus & Mary Chain, Sonic Youth, Iggy & The Stooges – or the other incarnations of the principal members of this band I have written extensively about over the years – The Manhattan Love Suicides, Blanche Hudson Weekend and Ailsa Craig – you will absolutely love this album. You owe it to yourself to go out and pick up a copy of this.

For further reference (including how to obtain this album) follow these links:

Posted by DaveCromwell at 5:31 PM

Anouk! You are one quick bunny.
Thanks for sayin'.
You know I only write about music I really believe in here.

Thanks for sharing this man- very cool band- love what ive heard so far - will definitely check them out some more. You are like Nardwuar the Human Serviette but less twitchy

I'm delighted once again to have read another wonderful description Dave!

William - to be even mentioned in the same sentence as the "great" Nardwuar the Human Serviette is truly the highest compliment anyone can receive.

Patricia, you are a sweetheart.

great review!! you did good job!
and love that photos in black'n'white colors )) really cool)

The B&W photos transfer rather well, Ivanka. Good call on that.

I often wonder how my "photo of a photo" will ultimately be received. Credit to the original composition, for sure.

It's interesting to see some older stuff. Recently you've been focusing on the most recent releases and gigs and this entry is a nice touch considering it dates back to 1999 when it comes to the music you write about here.

And it can be felt in this sound. 1999 was the time when the new wave of shoegaze and everything like it was beginning to emerge. Soon the great success of Raveonettes, White Stripes and other bands like the Kills changed the face of the music scene reminding everyone that rock and roll is still out there.

I think that both the band's music here and your writing, Dave, nail this specific atmosphere. From what I've heard in their tracks the band was both pretty sure about their musical identity and searching for a specific sonic language in the same time, thus many tracks differ from each other and show signs of an artistic travel. The final product may not be my cup of tea but one can't oversee the band's efforts.

As expected, eagle - your comments are most insightful. Focusing on the emergence of bands starting out at that same point in time - The Raveonettes - The Kills - and The White Stripes - is essential information that I omitted. I'm happy to read you doing it here now. Yes, this is exactly the period we are speaking of. The fact that those three influential bands are still going strong today - ten years later - it's important.

Yeah, Darren and Caroline have gone through three bands now - but what they bring to the table is the same kind of consistent and creative rock music - as the three big names you mention there as well.

nice review, dave.
this band souns almost the same as you told ;)
like their retro appearance and sound.

I'm happy to hear my descriptions match up to the sound you hear, Mr. Smork.

You should also be somewhat familiar with their overall sound as I have been promoting Darren & Caroline's music (across their various projects) for a few years now.