On Saturday the 24th of January, I rambled on down to The Production Lounge in Greenpoint, Brooklyn, NYC to catch up with my fave heavy power trio - Super Potent Death Baby.

I've been following this band since discovering them for myself in June of last year. I was aware there had been some personnel changes since I last saw them, so I was very curious to hear what they sounded like now. 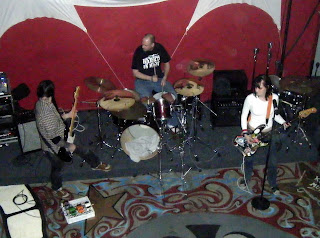 The band still features bassist and vocalist Suzy The Fox out front, as well as guitarist Pete The Meeet on all things six-string, but now the drums were being handled by new addition Paul Wallbanger. 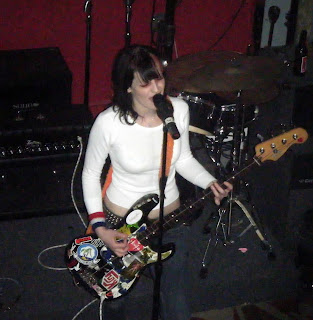 SPDB is fronted quite capably by lean rocker Suzy - who manages to capture the essence of both Joan Jett and Nikki Sixx, all the while establishing a voice and style that is still unique and her own. 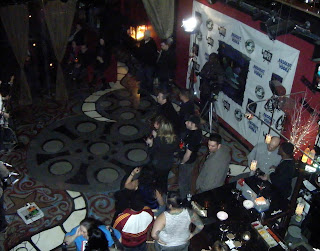 The venue itself was something of a pleasant surprise, providing a cozy and intimate atmosphere, with an overlook balcony that provided an interesting overall perspective. 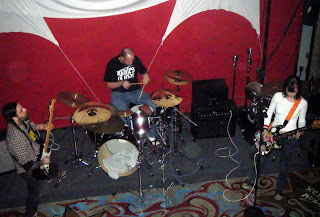 New drummer Paul had a nervous, anticapatory edge to him pre-show, as this was his first time playing out with this band (though he and Pete have played out together before in other groups). 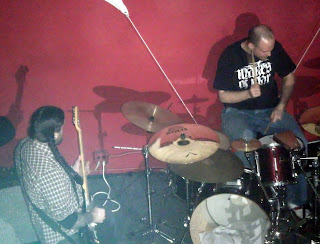 I was quite pleased to hear that Paul locked in perfectly with Pete and Suzy - and displayed some serious chops and power. Pete was, of course, a force to be reckoned with on guitar. 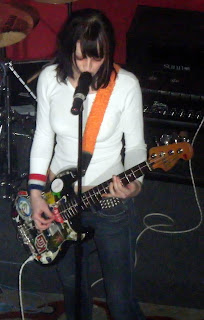 Suzy is an alluring combination of slithery femininity and tomboyish bravado. She writes and sings songs with lyrics like "I'm no Wonderwoman, And you're no Superman, But I'm not wasting my time now, honey,You do the best that you can" (“Heart On”). 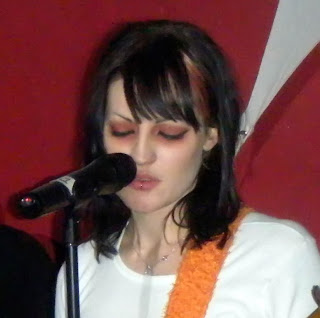 Shadowed eyelids add glamourous menace.
In the Ramones-esque “Get Burned”, she sings:
'Stay away, me oh my, I can wait to fight
contemplating my life, I can't play tonight' 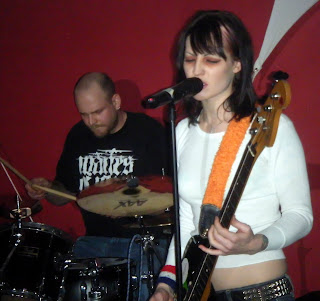 Paul and Suzy show why drums and bass belong together. 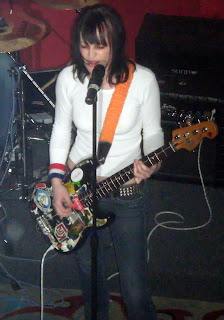 Cream and Jack Bruce - The Crue and Nikki Sixx - SPDB and Suzy. 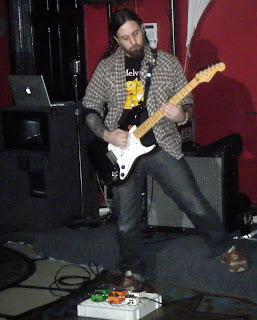 Pete is an amazing guitarist. Combining fluid musicianship with an aggressive punch. He cites bands like black sabbath, 24-7 spyz, kyuss, mars volta, dinosaur jr, yes, the zombies, and king crimson, just to name a few, as those he admires. 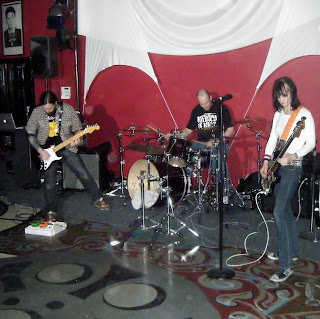 They are a 3-piece with a very big sound.

Also performing on this evening was a band named Josephine 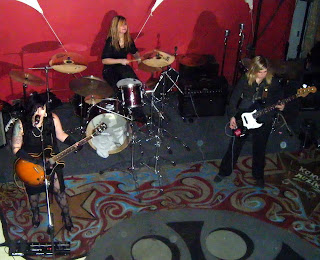 A 3-piece as well (all female) they had a distinctly different sound. 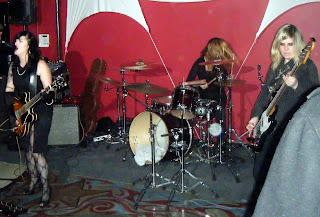 More pop than heavy, it was rock with more of an alternative feel to it. The band lists Joy Division, JAMC, The Cure, Depeche Mode, Slowdive, MBV, Oasis, Ride, Charlatans, and Pat Benatar as some of their Influences. I also heard instrumental sounds and progressions that at times reminded me of U2 . 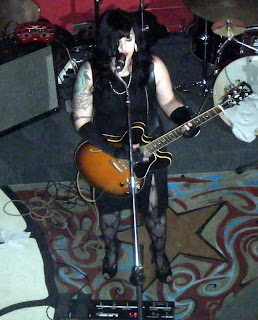 Singer Xtina has a very stylish presence, to compliment her self-described "trained but abused... really loud and cracks sometimes with emotion" voice.
Later on that night we headed over to the bar Suzy works at, Van Gogh's Radio Lounge for a post-show afterparty. 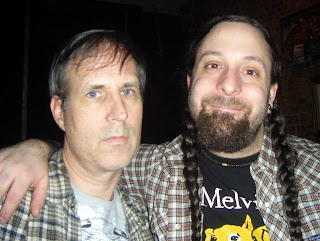 Both Pete and I celebrated out birthday's together (we're both born on the same day).


Trusty wingman Steve was with me for the whole show and also joined us at the Lounge. 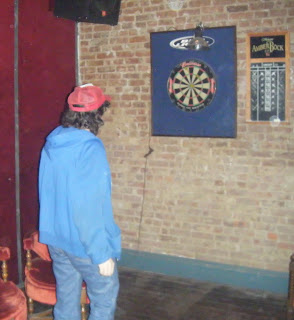 Many sprited games of darts were played.

nice, dave. couldn't quiet, get an impression about that first band, until i read about the second (josephine). witch reminds me of reamon (the b and from germany) song "josephine" :) so it is clear why it is more pop. (even if it is not relatef, but in my mind it is. :) )

Thank you, Anouk. If there's one thing you can count on - its the overall "groovyness" of this blog.

Mr. Smork - follow the link I included at the end - to Super Potent Death Baby's Myspace page. You can hear some of their songs there.

Also, check my YouTube - I've got a number of their tunes up there as well.

i already did. :) not bad. i think it sounds quiet impressive on a live show. isn't it?

Great band and great entry. Their sound is *massive* and it gets right to the point. The sound is powerful and really energetic. And Suzy is really admirable. ;)
GREAT job.