On January 31 st , 2009, Vintage Vinyl Records hosted "Buddy Holly Lives," a live in-store concert event. The free concert raised money for the Light of Day Foundation, a charitable organization dedicated to finding a cure for Parkinson's Disease. Each of the performers played their favorite Buddy Holly tunes to celebrate the life of the rock legend and commemorate the 50th Anniversary of his tragic plane crash. The event took place on the Vintage Vinyl in-store stage.

As I am a big fan of hers, I made it a point to be there for Nicole Atkins set. 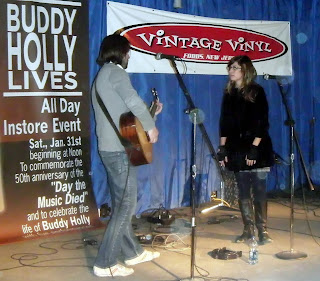 Nicole performed as a duet with singer/acoustic guitarist Liam Moroney.

Listen in here, as they perform the Buddy Holly classic "Oh, Boy" 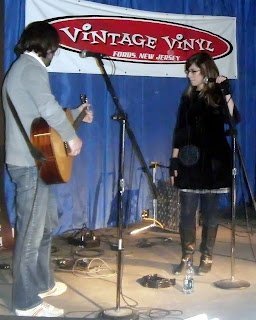 Nicole was (as always) her loose, funny and casual self.

Here the twosome perform an original composition of Liam's, inspired by Buddy Holly, called "There She Goes".

You can see and hear how it sounds, here:

Have I ever mentioned that Nicole Atkins has a voice so pleasing to me, I get actual physical sensations when I hear it? I mean those kind of tingly vibes that run up and down your arms type feelings. There are not too many other singers or bands (or sounds) I can say that about, and this is just one reason why I will frequently attend her performances.

After she was done performing, Nicole took the time to greet fans and sign their posters, as well as chat a bit. 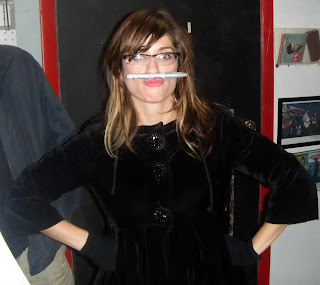 Here Nicole poses for a davecromwellwrites blog exclusive photograph. Nicole told me the glasses she wears here were done so in tribute to Buddy. In an act of solidarity, I too was wearing spectacles.

This photo, by the way, is copyright held, patent pending and licenced exclusively to davecromwellwrites. It is one of a kind and no one else may lay claim to it. True, it only took a split second to create, but all parties involved were consulted and agreed to therefore and therewith. So, take that musicsnobbery! 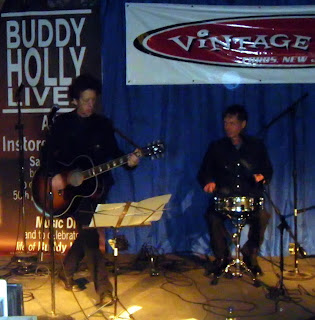 After Nicole's set, it was Willie Nile's turn to make Buddy music.

Willie Nile has been a rock and roll staple in New York for decades, known for his clever songwriting and punk rock energy. He's recorded 9 albums, from his Columbia Records self-titled debut to his acclaimed indie release The Streets of New York. Willie has toured with The Who and performed or recorded with the likes of Elvis Costello, Ringo Starr, Ian Hunter, Richard Thompson and Lucinda Williams.

He ripped through a spirited set of tunes and the enthusiastic record store listeners showered their approval through the time-honored practise of paddling their hands together in a rapid motion. 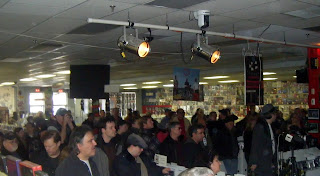 It was a full house, in a nice, great big room.

Vintage Vinyl is a very cool record store, and kudos must go to owner (and the show's soundman) Rob Roth.

Bargin hunters thumbed through bins of classic albums and CD's. 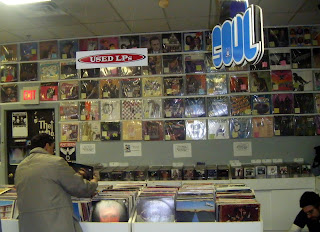 Having recently acquired a turntable, after more than a few years of not having one, I found myself gravitating towards the LP bins. Lots of awesome records to be found.

Then it was time for the final act of the afternoon.

Pat DiNizio is best known as the lead singer and songwriter for the popular New Jersey power-pop band The Smithereens. Pat is also an accomplished solo performer and has just released a Buddy Holly tribute album, which is out now. 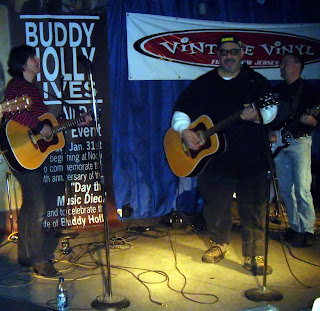 He was accompanied by 3 other guitar players with him - 2 acoustic and 1 electric. One of the acoustic guitarists (pictured here) - Kurt Reil - has his own band called The Grip Weeds. They played earlier in the show, and Kurt sang exellent harmonies with Pat. 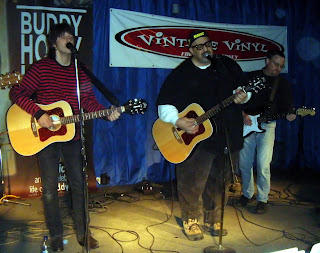 At this point Pat performed his original composition, based on the relationship between Buddy and his one true love, titled "Maria Elena"


After the show, they set up a "meet and greet" table on the stage, where you could chat a bit with Pat, get him to sign one of the 100 individual "Buddy Holly Lives" posters, and take a picture. All of the proceeds from the sale of each poster went to Light of Day Foundation.

While waiting on line, I spotted a photo on the wall of Nicole, from a previous in-store appearance. 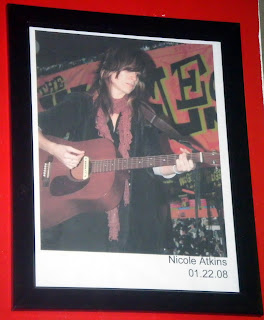 There's nothing I like better than taking a photo of a photo. Especially if it marks an event or occurrence I wasn't even at. This activity has worked for me before (when I took a picture of Bo Diddley in Manny Music, just so I could "visually gift it" to a certain English musician who is something of a "Diddley head").

Pat took a lot of time with everyone. There was no "bums rush" here. 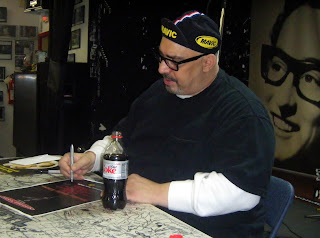 The man enjoying a refreshing diet coke while silver-pen signing on my poster. 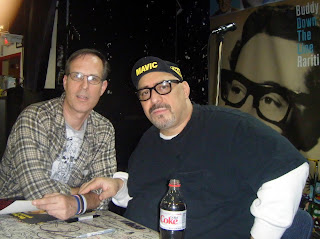 And of course, the obligatory "me and the famous person" photo. I sometimes think the event didn't actually happen if I don't do this. Or, more accurately, that the event happened, but there is no evidence that I was there. 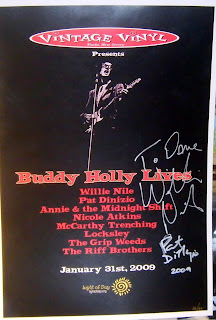 The poster I bought to support the cause.


Remember Buddy Holly forever - and always Rave On!
Posted by DaveCromwell at 8:32 PM

ok, my turn. :)
that chick - nicole is quiet allright... :) but that guy next to her looks like a complete hipy. :) deamn i forgot that other musician's name... the big one... i like as he sang... maybe more than nicole... :)
in general i like this post.
but, dave you know what i been missing? your chats with those artists. i use to like when you were asking some questions to them or just mentioned what they say to you... :) cause you have chance to chat with intrusting artists, doesn't they say anything intrusting thing to you? ;)

Thanks for the great feedback, Mr. Smork. Yeah, I agree - I'm about due for another interview. I've got some good ideas cooking, so be on the lookout for that. For this piece, I wanted to get it out quickly (to commemorate the 50th anniversary date of Buddy's passing) - so no time to include any real conversations.

Rest assured there will be some coming soon!