One of the things that is so stimulating about being a music lover is discovering artists who not only embrace their influences - but are confident that the filter of their own sensibility can yield something worthy.

Such is the case with Jared Artaud, who through his sound and poetry project which he calls The Vacant Lots, bring a unique vision to life.

What follows here is an interview recently conducted with Mr. Artaud, which allows the artist to describe in his own words the genesis and ongoing reasons for pursing this creative project. 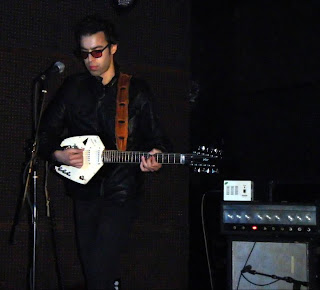 The video that accompanies your song "Cadillac" is some truly inspired animation. How did you come to work with Anthony Gross on this project? Did you have any input or suggestions on how it would look? Great song, by the way.

Well, the footage comes from a french animation piece called La Joie de Vivre. It came out in 1934. Unfortunately, I never had the chance to work with Gross. He died in 1984. I came across this work while searching out footage for our projections. It's a long process of sitting and watching hours upon hours of films, videos, and clippings for our visuals. When I put this film on I was instantly hooked. More like hypnotized by it's rhythm and beauty. I felt immediately connected to it. I decided to sync it up with "Cadillac" thinking the two shared some kinda rhythm and spiritual connection. The two worked really well together and I thought it would make for a great music video.

You make music and have a visual presentation that brings to mind the seminal NYC band The Velvet Underground. Describe what sort of influence or inspiration they have had on you. Which would you say is their best album?
The Velvet Underground were one of the first bands I heard that made an immense impression on my soul. Their music hit me when I was about 16 around the same time I was discovering a lot of other music and poetry like The Stooges, Television, The Doors, Coltrane, Ornette Coleman, Edgar Allan Poe, and Allen Ginsberg. A lot was happening to me during that time, a lot of transitions. The Velvets opened the door and led me through, so to speak. I remember crying the first time I heard "Heroin." I used to spend hours alone in my room with headphones or in my car listening to them. I was totally ensconced in their sound. And I was usually really stoned. I think the elements of simplicity, drone and lyrical poetry really inspired me the most at the time. The guitar playing was so unreal too. I loved the rhythm guitar playing off their albums. Lou Reed and Sterling Morrison, as guitar players really did something for me. I liked how different they were when sized up against the other groups from the sixties I was listening to. I loved their first album very much but it was White Light/White Heat that became my favorite Velvet Underground record. 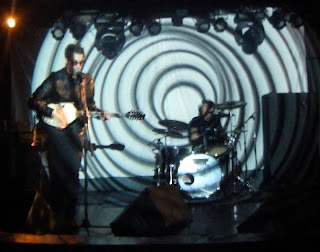 What about other artists from different era's besides the 1960's? Would you rate Alan Vega as any kind of influence?

I really like Bo Diddley, Chuck Berry and Roy Orbison from the 50's as well as Howlin' Wolf, Muddy Waters and John Lee Hooker. From the 70's some of my favorites are Richard Hell, Patti Smith, New York Dolls, MC5, T Rex and 80's to today include Spacemen 3, Sonic Youth, Galaxie 500, Brian Jonestown Massacre, The Warlocks, The Black Angels, and The Black Ryder to name a few.
I love Suicide, and Alan Vega certainly has inspired me. There are a few handfuls of bands that really have had the power to produce a mysteriously strange effect upon me, Suicide is one of them. 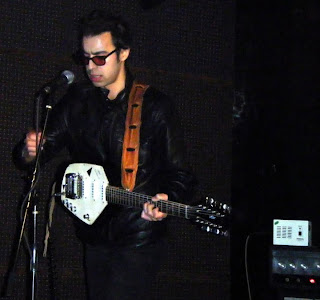 "Let Me Out" is a slower, trance-like pulse. It has a cinematic feel - as if it was meant for one of those riding down the highway, motorcycle adventure movies (like "Easy Rider" for example). Since you use a lot of video and film imagery in your live show, do you mentally conceptualize this kind of imagery when you are writing your songs?
That's a good question. I feel like when I am writing I tend to keep things ambiguous. I really like creating lines that can have many different meanings and can be interpreted in many different ways. I really spend a lot of time on the lyric end of things and work towards the relationship of corresponding abstract lyrics with some kind of vision. Sometimes, I have a better understanding of how things come together after I have written something down. But most of the time it's like meditating on a vision or putting fragments from a dream together. I think there is something to be said for working out the madness within order and vice versa. Maybe taking some lines out or moving them around to change the story. I like to let the subconscious go to work sometimes and see what happens. It can get a little insane, man.

Your song "Confusion" is droney and psychedelic. Did you use any keyboards on the recording or are all the tones generated by guitars? The lyrics contain a vocal catch line that sounds like "insane man" - who is the insane man you are referring to?

I used organs as well as guitars, tanpura, drums and alternative percussion for "Confusion." Well, it's not really one person I am referring to. Although when I hear the song now, I get a strong vision of Rimbaud. 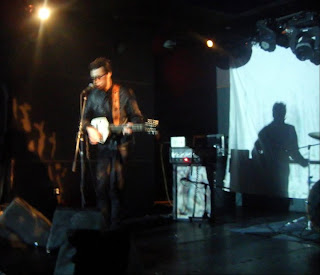 Any books, articles or favorite periodicals that you have read recently and would recommend?
What I have been reading lately is "POP" by Tony Scherman and David Dalton. It's a book on Andy Warhol. Also, Jean Genet's "Funeral Rite"s and Jean Cocteau's "Les Enfants Terribles." I just finished up Octavio Paz's book on Marchel Duchamp called "Appearance Stripped Bear" and finishing up rereading William Burroughs' "The Soft Machine." Also, it might be that time to reread Les Fleurs Du Mal, we'll see.

Check out this video feature interview with Jared from Seven Days, Vermont's alternative newsweekly, http://www.sevendaysvt.com/, done this past February.

The Vacant Lots signed to Mexican Summer and released a 7" single called "Confusion" (MEX 074) which quickly sold out, earlier this year. They were handpicked by Sonic Boom to tour the U.S. with his band Spectrum and were recently invited by The Black Angels to play Austin Psych Fest 4. Their next show is Friday, June 17th opening for Dean Wareham plays Galaxie 500 songs at The Bell House in Brooklyn, NY. Following this show a west coast and UK tour is on the horizon. For more info, follow The Vacant Lots on Facebook, Twitter, and http://www.thevacantlots.com/

Posted by DaveCromwell at 9:02 AM

I am definitely admiring the video stills and the photos--in particular, the shape of this artist's instrument. I would say that it all looks "cool," but in truth, I find that I don't want to be "cool" myself. So "cool" seems like a putdown. However, I don't mean it that way. I mean it as if "cool" were a good thing, and besides, despite my penchant for verboseness, I don't possess a broad vocabulary. So I'm stuck with using "cool" for now. Another awesome job by Dave.

Excellent Dave! Love the Velvet Underground influence as well as the old blues men.The video back story was wonderful and a fine tribute to Anthony Gross.Burroughs, Cocteau, Warhol...this dude is one well rounded MF! His music reflects all this and more...Thanks for a very insightful look at this artist.

Nice to see Jared is hitting his mark, here. As a fan of nearly all the artists he mentions as well, it's always great to read that there are many others who feel the same kind of passion about all this.

another great work, Dave! and I like that video Cadillac !

The Cadillac video is truly a creative and wonderous thing, Ivanka. The sounds and images mesh so well, its hard to believe they were made in different decades.

nice little piece, dave.
somehow after i read this interview i kind of imagined what the music will be.
i like videos, though i prefer that cartoon one.
and nice pics as well. as said WFSD i couldn't not to notice his guitar's shape.

Nice work again, Dave! Great band.I liked videos and pics, but my favorite is the first video, "clean and subliminal".

Great job Dave, with one of the more fascinating (and deep-thinking) on the psychedelic forefront/vanguard right now. Jared IS cool.

Great to see Jared and his Vacant Lots gettting some much deserved attention here. His attention to certain poetic figures hearkens back to the day of primtime Patti Smith and Television.

I'm impressed. Thank you for bringing this band up into the spotlight, Dave.

Jared is absolutely a unique artist. I like the music even though it doesn't shake me, I mean I'm not on my knees. Still, it's very good. Everything here has its place- the visuals work perfect with the sound. This man has a very clear vision or rather an intuition and it all seems to be very natural, authentic and truly original. It's not another band, not another project. It's different and authentic and I think that more and more people will love it every day. Rock audience has a good taste and spots authenticity from miles away. That's what they will find here.