Here are two features I've written for The Deli Magazine that can now be found on that website. 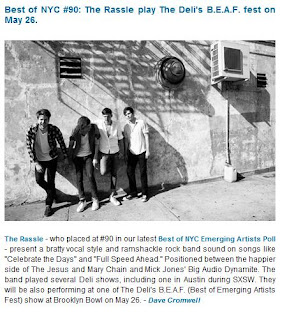 The Rassle - who placed at #90 in our latest Best of NYC Emerging Artists Poll - present a bratty vocal style and ramshackle rock band sound on songs like "Celebrate the Days" and "Full Speed Ahead." Positioned between the happier side of The Jesus and Mary Chain and Mick Jones' Big Audio Dynamite. The band played several Deli shows, including one in Austin during SXSW. They will be also performing at one of The Deli's B.E.A.F. (Best of Emerging Artists Fest) show at Brooklyn Bowl on May 26. - Dave Cromwell

Deli CD of the Month: Yellowbirds - The Color 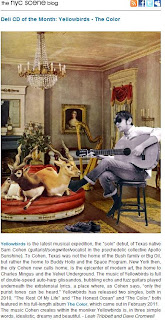 Yellowbirds is the latest musical expedition, the “solo” debut, of Texas native Sam Cohen (guitarist/songwriter/vocalist in the psychedelic collective Apollo Sunshine). To Cohen, Texas was not the home of the Bush family or Big Oil, but rather the home to Buddy Holly and the Space Program. New York then, the city Cohen now calls home, is the epicenter of modern art, the home to Charles Mingus and the Velvet Underground. The music of Yellowbirds is full of double-speed auto-harp glissandos, bubbling echo and fuzz guitars played underneath the extistensial lyrics, a place where, as Cohen says, “only the purist tones can be heard.” Yellowbirds has released two singles, both in 2010, “The Rest Of My Life” and “The Honest Ocean” and “The Color,” both featured in his full-length album The Color, which came out in February 2011. The music Cohen creates within the moniker Yellowbirds is, in three simple words, idealistic, dreamy and beautiful.


The Deli CD of the Month


Posted by DaveCromwell at 1:43 PM

After hearing three songs, I think the Yellowbird album sounds promising. I can't help but like a song that uses a beat that reminds me of my favorite Roy Orbison song, "It's Over." The second tune features a nice guitar instrumental section. Skipping down to Pulaski Bridge, as the title makes me think of Brooklyn, I like whatever instruments are playing that riff that introduce the song and are replayed throughout. Also, in reading the album personnel, I couldn't help noticing that I went to school with the credited drummer. Nice, pleasant, 60s vibe in all that I heard.

Yeah, I definitely caught the Orbison vibe from Yellowbird's work as well, VFSD.

Nice to read you took some time to investigate more than a few of the cuts. Sometimes digging a little bit deeper has its rewards.

I'll skip the Rassle since that's not my cup of tea. Don't dig it.

Yellowbirds- that's another story. The band gets back to the great tradition of American music from 50s and 60s, a period which is absolutely fantastic if you ask me. The sound is fully formed, the melodies are great and the music flows naturally. I am listening to their songs and I will keep on doing that. I really, really like it. The King lives- in music like this!

And eagle - I love this sentence:

"The sound is fully formed, the melodies are great and the music flows naturally."