Music School Kids Get It Right 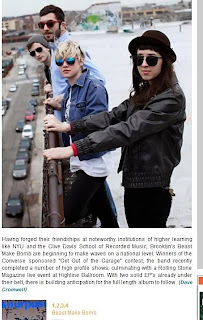 Having forged their friendships at noteworthy institutions of higher learning like NYU and the Clive Davis School of Recorded Music, Brooklyn's Beast Make Bomb are beginning to make waves on a national level. Winners of the Converse sponsored "Get Out of the Garage" contest, the band recently completed a number of high profile shows, culminating with a Rolling Stone Magazine live event at Highline Ballroom. With two solid EP's already under their belt, there is much anticipation for the full length album to follow. On their EP "Skinny Legs" the song "Rewind" immediately encapsulates what this band is all about - vocals displaying clearly understood storytelling coupled with guitars that that chime and sometimes veer into dissonance. The rhythm section is first rate - driving everything along the way only a higher level rock band could. On their "Sourpuss" EP the song "1,2,3,4" projects a punk attitude and rhythm, while still maintaining a level of sophisicated musicianship. "Coney Island" turns those tables around somewhat, revealing a tender introspection and further intelligence at work. The refrain "you're going to break my heart" is stated as a knowing resignation to that fact, while still moving forward with the relationship. While "Rough It Out" brings power pop rhythms to life, the lyrics state how "nothing is real when my brain is on the loose." The band was prominently featured during The Deli's B.E.A.F (Best Emerging Artist Festival) on the Emerging NYC Women Stage.

Here is my exclusive video interview with the band (presented in two parts) that was done just after their set at the Highline Ballroom on May 5, 2011.


Watch their gorgeously nostalgic video for the song "Coney Island" (with truly amazing footage of that beach town's golden age).

My photos from their Highline Ballroom show 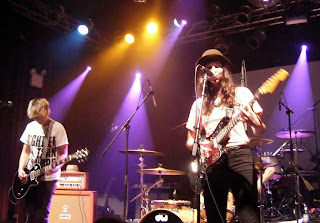 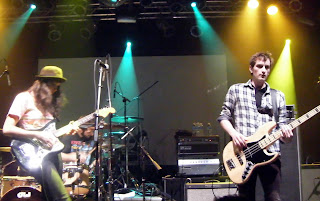 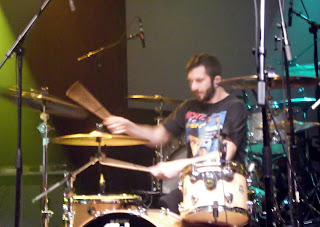 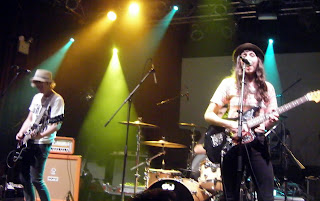 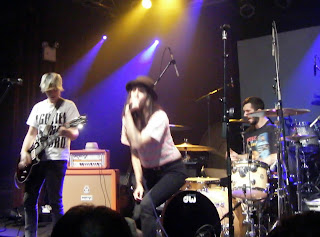 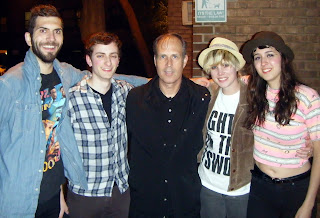 Posted by DaveCromwell at 7:34 AM

Be sure to look at the videos as well. There's some quality dialog in there.

Those are some sweet words indeed, William. I should have that quoted on my masthead here - "like pitchfork but less douchey" ! ;-)

Excellent description Dave. Love all pictures. Many young artists needed support and they need to be known, you give them this important way to show their magnific talent. Your are blessed with your work Dave, it's a great job.

I'm glad you like the pictures, Paty. I hope you like their music too. I really love the song and creativity of their video "Coney Island" (which is a place I'm quite partial too as well).

The small note on the band is accurate and you nailed their sound in this description perfectly. They remind me of Faith No More- not because of the style but because you can't put them into any specific box with a genre name. It's shoegaze but not quite shoegaze, rock but not quite a typical rock etc. There is something more to their sound.

I hope that we'll some more writings and vidoes of this band right here on your blog Dave, especially that they've got some cool plans up their sleeve.

Oh and one more thing- their Coney Island video. Thumbs up for breaking up with the tradition of typical videos showing the band playing and some additional scenes. Of course it would be wonderful to see a video with the band and the two beautiful girls shining like diamonds on the silver screen but it can be done some other time.

So I was just noticing that Beast Make Bomb was up for Deli Magazine Artist Of The Month, a poll which ends tomorrow. So hurry up and vote. It's free and here is the link: http://nyc.thedelimagazine.com/snacks

I really liked the interviews, by the way. I could relate to what Ceci said about her mother not listening to music, and yet she still endeavored to develop musical skills despite not having that innate genetic inclination that other musicians possess. You are not alone, young one.

Also interesting that Glenn would emerge without the ability to read a guitar chart, considering the expense of an NYU tuition. I'm not slighting her, but academia in a general sense. Very illuminating, Dave. Excellent work.

And since it's Memorial Day, I feel a Mr. Smorkism is appropriate: "Feel the Free, Everyone!" And remember those who paid for it.

I'm not a big fan of the overly produced "journalism" video interview either, Eagle. There doesn't need to be all these glitzy intros - or even worse - attempts at comedy (which usually just is annoying) - I'd rather let the band do the talking. Prompt them with a question, and then let them go. What I write is where the opinion lies.

Thanks for that link, VFSD. I certainly think this band is deserving. Glad to hear you could relate to what was said in their video interview as well.

Another great review Dave, I like the photo's/video's you've included :)

I'm happy to know you took the time to check it all out.

sorry, but i won't analyse what you wrote, but i'll say, that i was waiting video interview from you for a long time! and it is here. i like it. and pics was quiet nice and rich coloured.
and band looks nice, and sounds good (how can i not like band with pork pie hats?) ;)

I'm glad I could present another video interview for you, Mr. Smork. Why not let the bands speak for themselves? And the porkpie hats? Well that's just icing on the cake.