Went to see the Nouvellas play a live show at Crash Mansion on Thursday night, the 26th of March, '09. I've now seen them perform a number of times, and with each successive show attended, I gain a greater appreciation of what they do. 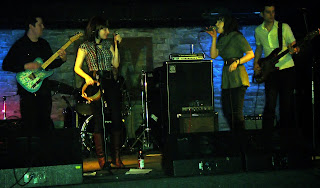 The band plays a '60s motown style, with twin dynamo lead vocalists Jamie & Leah adding a pretty/punk dancey feel to it all. 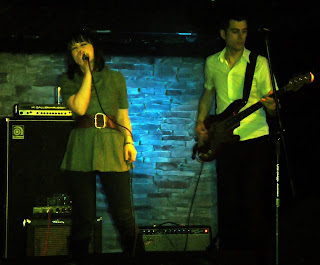 Jamie has a really powerful voice - she sings with a lotta soul - and bassist Joe is all business as he lays down a stax/funk groove. 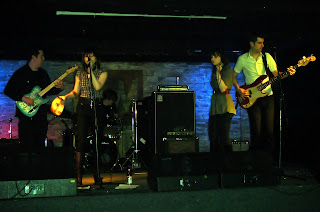 The band was formed when members of their prior incarnation - The Dansettes - decided to split off into two band new bands. The Nouvellas were then formed. 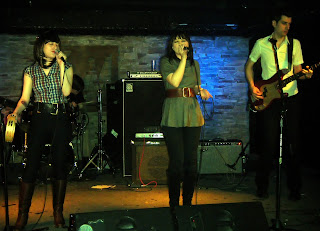 Leah and Jamie sing a lot of their songs together - occasionally trading off on vocal lines. It is their voices combined though, that gives them their unique sound. 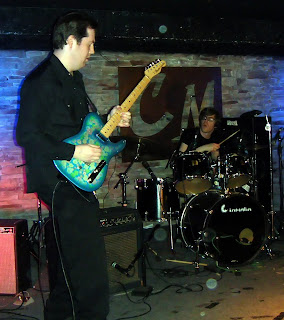 Guitarist Dennis and Drummer Andy complete the power-trio backbone of the band. In particular, Dennis is a most impressive musician, playing clean 60's style guitarlines, with the speed and accuracy of the best modern day guitarists around. Chatting with Dennis post-show, he confirmed a love for legendary guitarist James Burton - who played with Rick Nelson in the 50's and Elvis Presley in the 60's. 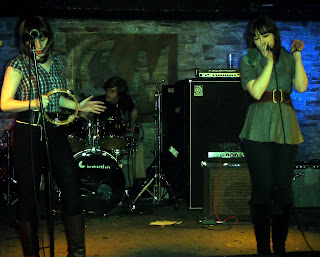 In addition to their strong, quality soulful vocals, Leah and Jamie have great style and presence. Jamie has the natural dance moves and sway, while Leah provides a looser, more casual and punkier attitude. It's a combination that appears to work. They seem to always be having fun, despite any minor snags or technical difficulties. They appear to be laughing a lot at it all. 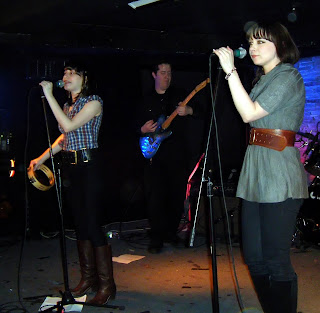 That's not to say their music isn't to be taken seriously - because the quality is surely there.
Give a listen to an earlier recording (not mine) containing an excellent video medley of "I Got A Feeling" and "Satisfied" taken from various performances over the last year or so.
http://www.youtube.com/watch?v=lhvpki496P0 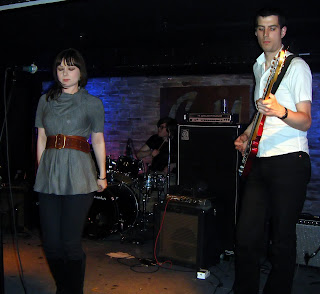 Jamie dances, while Andy and Joe lock down the groove. 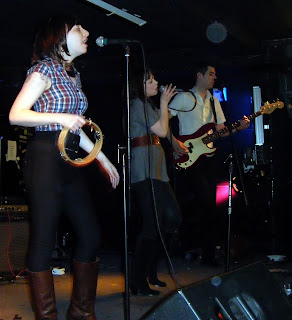 Voices united in the quest for ultimate soul. 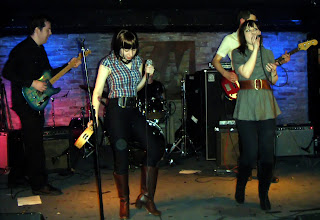 Dennis riffs away, while Leah rocks the tambourine and boots. Jamie holds a note for maximum effect. 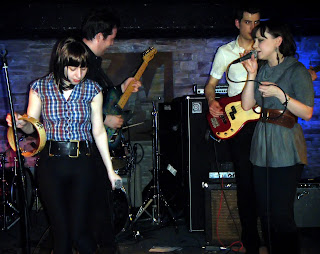 Check out The Nouvellas at these links:
www.myspace.com/nouvellas
http://www.nouvellas.com/
And you can check out their previous band here:
www.myspace.com/thedansettes
The band also has a Facebook presence:
http://www.facebook.com/pages/Nouvellas/6799977718
Posted by DaveCromwell at 7:40 AM

One of the first visual things you notice about the Nouvellas is the rather large, or wide belts that Jaime and Leah wear. Aurally, they have some really long and wordy vocal passages that demand a great deal of breath support to execute. It makes one wonder how they accomplish this, when as they draw in their air, their tummies must be meeting up with those belts, making it difficult. Obviously, they've figured it out, and we're all glad that they have. As for the band, Joe and Andy are solid, but Dennis is God on guitar. Actually, does anyone know if God plays guitar? One shouldn't assume. Anyway, Dennis is good. I mean he's REALLY Good. That's like God with an extra "o." Now Dave, the commentary is yet another example of some fine verbiage, but the camera work is a little spotty. And I mean SPOTS! I recommend CASCADE, dude. Otherwise, the angles you got were great. Another fine review by Dave Cromwell.

no big and long analysis from me this time. :)
the beginning i found a bit clumsy to read (can't explain why). writing about appearance is good don't know if necessary when photos are given. :) but on the other hand for "plastic" readers might be inpossible to read when there is nothing written about that. :) "how can he write about their talent and not to mention their awful/nice dress" (some irony from me) i like when you write about their moves, vocals - it's good. could you please write about public reaction next time? :)
in conclusion - another nice review. :)keep going.
feel the free everybody! :)

Geee, another fantastic band. Their music is a proof for a theory of old ideas and styles being always fresh and creative. I mean- the way songs were written 40 years ago, that's the BEST way if you want to create something energetic, atmospheric and full of positive emotions.

I'm a fan now. Absolutely dedicated. It's sweet how new musical journeys can begin one after another, introducing us to whole new worlds of music for countless times, isn't it?

Thank you for all this stuff, Dave. Great job.