On Friday night, the 6th of March, 2009, I finally got a chance to head on down to the legendary rock club The Saint in Asbury Park, New Jersey. This venue has seen a lot of New Jersey acts play its stage, as they worked their way up through the ranks, in their quest for all things rockstardom. 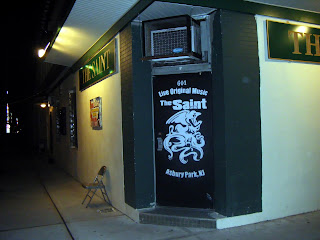 It's a very cool little room in Asbury, located a few blocks away from the seaside town's boardwalk. 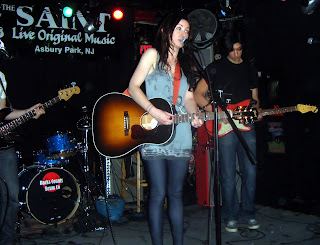 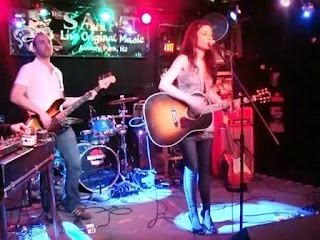 Photo by Laura in NJ
Mieka (pronounced meeka) is a very pretty folk singer of sorts - though to simply call her a "mere folk singer" would be to do her an injustice. She's more of a slightly quirky, alternately smooth-then-raspy vocalist who has oodles of soul in her voice as well. 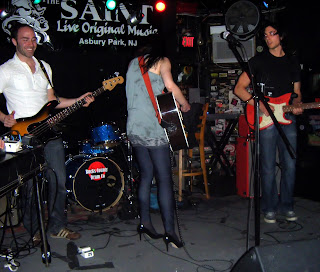 Some of her musical influences whose work I also admire are the likes of PJ Harvey, Jeff Buckley, Cat Power, Fiona Apple and Neko Case.
Another singer (from another era, I suppose) that popped into my head as someone who exhibited similar qualites (both vocally and in performance style) is Rickie Lee Jones.
http://www.youtube.com/watch?v=MRioLytZ-VA 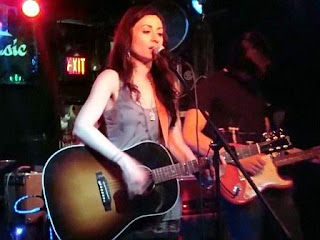 Photo by Laura in NJ
Mieka has her own unique style and presence, however, and you can hear real attention to detail in her songwriting and storytelling.
"Oh, you're livin' the shadow - daughter," is how one emotive song starts. She begins to weave a tale where "our branches may reach up to heaven, but our roots dig where they can." How "our river is running wicked, yeah I watched it. Oh, its traveling all along your face. Baby you watched them all just sinkin -and you dove right in." On to a big chorus where "Whiskey is the Devil" is the repeated line. This is not "party" music by any means. Instead, it challenges you to think about it some.
Listen her performance of this song here:
http://www.youtube.com/watch?v=LFZ-cpHDA1I 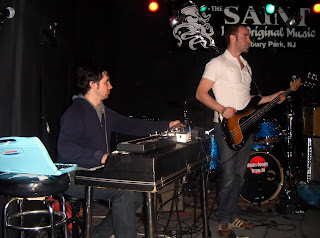 Her band provided excellent accompaniment. In particular, her keyboard player impressed me with his fluid style and many layers of sound. Both her bassist and lead guitarist were more than competent. She does play with a drummer as well, however on this particular night, he could not attend due to prior committments.
As I've mentioned previously, her voice is alternately soft, soulful and then like sandpaper. A stylisticly unique combination. She did a song with lyrics "they're here, drink up, we're all gonna die!", which was not nearly as morbid as that sounds. In fact, its a most peppy, uptempo little number. 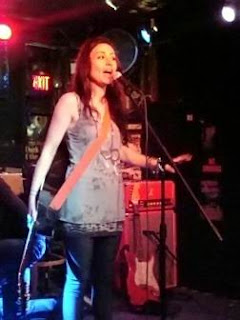 Photo by Laura in NJ

Check out her performance of that song right here: 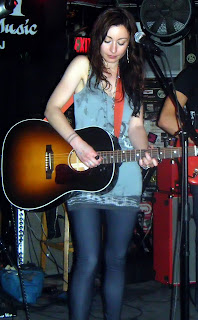 I would discover later on that Mieka had won a talent competition called The Cosmo Starlaunch. I'm not surprised that she won, as clearly there is a lot of talent on display there.
More can be found out about this event, here:
https://subscribe.hearstmags.com/subscribe/splits/cosmopolitan/cos_starlaunch 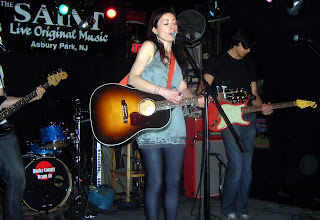 During the latter part of her set, Mieka then announced she was going to do a cover song - and proceeded to take on a song that has been famously interpreted more than a few times - the Leonard Cohen classic "Hallelujah."
Listen here ask she applies her own unique interpretation and vocal inflections on this song.
http://www.youtube.com/watch?v=OB2ooFCqQpw 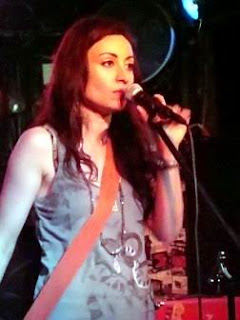 Photo by Laura in NJ
Attempting a song that has been popularized by not only Mr. Cohen himself, but Jeff Buckley, Rufus Wainright and many others - you had better have the confidence to bring something unique in your interpretation. On this night, I believe she did, as it was a most impressive rendition.
For those curious about the song's possible meanings, check out this fascinating break down, analysis and discussion of it:
http://ask.metafilter.com/17841/Leonard-Cohen-Hallelujah-meaning 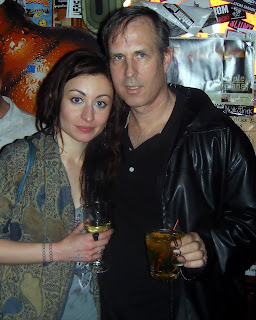 Meeting the Meek afterwards
Find out more about Mieka Pauley here:
www.myspace.com/mieka
Check out The Saint here:
http://www.thesaintnj.com/
Mieka performs next at the upcoming SXSW showcase in Austin,Texas.
Posted by DaveCromwell at 4:52 PM

A mere block or two from the boardwalk—what map are YOU reading, Dave? Guffaw. I love the idea of a band playing without a drummer. It really helped intensify the quiet mood of the song about the booze. The keyboards and vocals really shined there because the bass just laid it down and gave them the space they needed. Best moment in that song had to be when the guitarist sang harmony. It was just such a change of pace from what had preceded. Her facial expressions really deliver the narrative of the funny tune. Thanks for including the link to that GREAT discussion about Hallelujah. Strong songs, Mieka!

ok, here is my comment:
first of all i would like to spread it in two parts: article and the performer.
article - what i noticed first of all is the exterior of the place where was that performance, it is quiet good idea to put such picture, it's like dave's photo with performer after almost all of his reviews. :) if i would be a new yorker i think i will find that club on guidance you left. :) when i read about her song i began to imagine how would her voice would sound like, when i watch video almost all i imagine was true. and there is dave with performer at the end, it's should be a signature of all his reviews. :)
performer - her voice is really sweet reminds me regina spektor. i checked her on her myspace and youtube, her records sound better, then in this live performance. in conclusion about performer: she has a lot of space to get better with her performance. (off course i wasn't at that show, so i am telling this not nice words :) ) on the video is clearly seen that she has a charisma, which is good.
feel the free. ;)

Good work Mr C , she will be checked out !

When you've got Cat Power and Neko Case among your influences, your music just can't turn out bad. Fantastic stuff, Dave.