Two friends whose opinions I value when it comes to music had previously recommended singer Jillian Rhys to me. Taking the now all-too-easy route of checking an artist out on Youtube, I made a mental note to go see her play somewhere - sometime. After one of those same friends told me about a live show of hers he had just recently seen, I knew I had to go and check this out for myself. 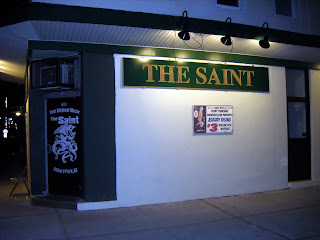 Lucky for me she was playing at The Saint in Asbury Park, New Jersey on the 6th of March. So, it was there I would experience all things Jillian. 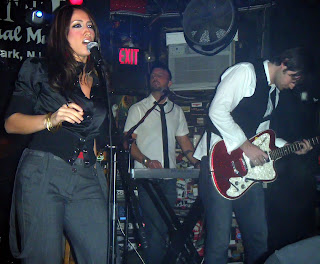 Photo by Pressley Abbott
What Jillian Rhys and her band present is what you would call "retro" music. Think 1963. Ronnie Spector, The Shirelles - one of the great branches to the roots of rock & roll music.
Listen to Jillian & her band as they play their own song titled "Hangin On":
http://www.youtube.com/watch?v=W1pmmdatFNA 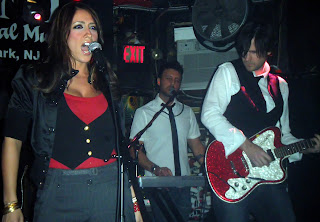 Photo by Pressley Abbott
The live presentation of that song is done extremely well. There are many sound textures and vocal harmonies. Jillian is defintely out front and the central focus, but her band and one backup singer fill everything out quite admirably. Of particular note is the trumpet player she employs, Antonio Gambrell. This sonic embellishment gives Jillian's music a unique texture that you don't come across that often in the rock environment. 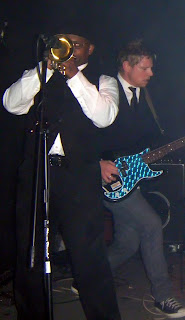 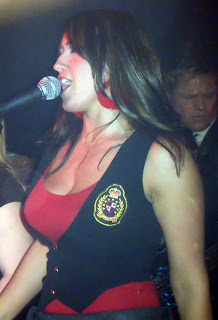 Jillian herself is an extremely attractive woman who isn't shy about drawing attention to her obvious sex appeal. Many of her movements appear to be somewhat choreographed, but that certainly doesn't detract from the show. In fact, I would venture to say it enhances it. 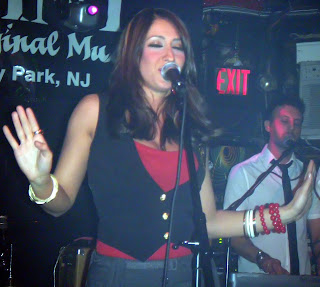 Photo by Pressley Abbott
What followed was Jillian's most erotically charged song of the set. The completely seductive
"Crush Me"
http://www.youtube.com/watch?v=yJjd-qGXF6o

"You're seconds away from putting your hands on me" she teases. Who can resist a come on like that? But then asks "how can I touch you, when your not here?" - no - I'm right here. Over here. Look - I'm waving my hand! 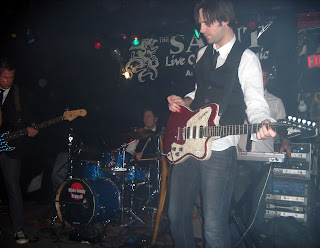 Photo by Pressley Abbott
As I've mentioned, the band is a tight unit that provides a perfect supporting cast for Jillian. 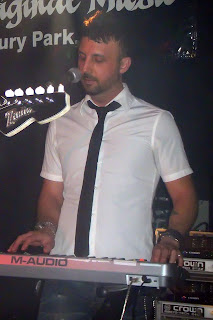 Photo by Pressley Abbott
Bart Shoudel not only plays all the keyboards, but is an integral part of the backround vocals (along with primary harmony vocalist Eryn Shewell.) 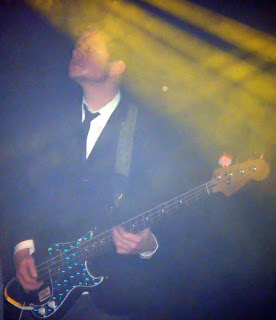 Photo by Pressley Abbott
Bassist Ron Haney is an energetic musical leader, who appears to be in full motion the entire show. 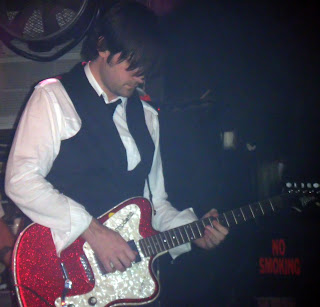 Photo by Pressley Abbott
Jed Higgerson manned all things guitarwise. In keeping with the "60's" sound, he had an nice and easy style that was clean with very little effects. On aforementioned "Crush Me" he provided solid rhythmic, chunky chords. What was additionally cool on this song is the last minute which has a jazzy coda of sorts. Having the benefit of repeated viewings (ah, the wonder of Youtube) I've come to really appreciate this part of the song.
Drummer Tom Cottone was quite impressive on this jazzed-up end out as well. Ripping off quick fills inbetween the rock solid beat he provided throughout the night. 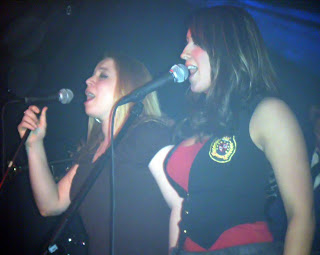 Photo by Pressley Abbott
Check out the soulful dual vocals from the ladies on the happy, good-timey "Do You Ever Wonder"
http://www.youtube.com/watch?v=hYXzi7OdOvE

The vocal hookline "this feeling I have for you" quite catchy. 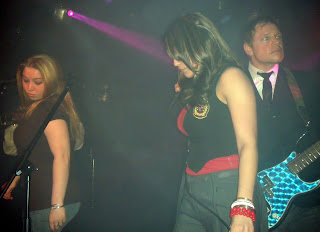 Now fully embracing the era of music this performer so accurately represent, of the Shirelles classic "Will You Still Love Me Tomorrow?"
http://www.youtube.com/watch?v=kPAuWsdZwTY
This is such a great song and Jillian really does it justice. Originally recorded by The Shirelles and written by the Brill Building songwriting team of Gerry Goffin and Carole King, it went straight to No. 1 in the year 1961. 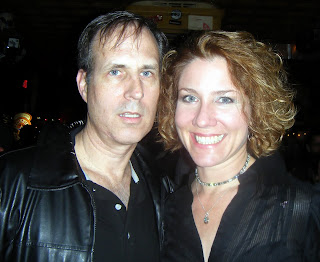 Yours truly and the one and only Laura from NJ enjoyed the show together. 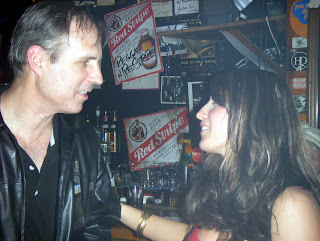 We then had a quick post-show chat with the star herself. 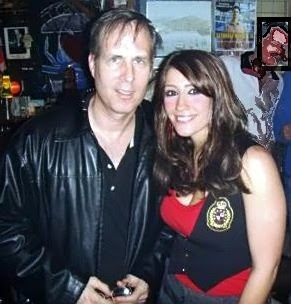 Photo by Laura in NJ
Jillian is sweet and friendly, and it was a pleasure to meet her. 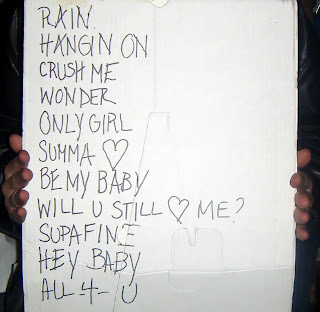 The full set list. Jillian joked about not having any paper, so wrote it all out on the back of a large cardboard advertisement.

You can find out more about Jillian Rhys and her band at:

Posted by DaveCromwell at 7:36 PM

This review, these clips, these photos, these vocals, these songs, this band, their reproduction of the sound of the Pre-Beatles Girl Group era, that cover of one of the greatest pop songs ever, and of course, Jillian, have all one thing in common: They are SUPAFINE!!! It may only be March, but once this ensemble blows into Austin for SXSW later this week, Texans will be experiencing a HEAT WAVE! Oh, mercy.

ok... here's my turn... hm... i'll start from good things... here i go:
the article is quiet good. good to (this time) to read not a bio of band members, but the impression you got from their playing. :)
the singer is really "juicy" (if i could express my good emotions to that singer :))) ), her voice is goo as well. the band did really great (deciding from the videos), and i like that old rock'n'roll kind stuff - i always like that. :)
bad things:
the back vocal female singer... what the hell was that?! did she eat her stage clothes, so she had to limb to stage wearing pajama?! she definitely was falling out of that bunch of performers.
this is my opinion, and i'm not going to sorry that.

Thank you for the detailed commentary, Mr. Smork.

I would definitely agree with you that Jillian is quite "juicy" and the band is top notch.

In this instance, I beg to differ with the snarky remark of Mr. Smork. Eryn Shewell is a lovely looking lady who delivers some seriously soulful singing. For more info about her own music, check out the link below:

i betr that beck vocal singer is good for singing and stuff, just need to dress before going to stage, that's all.

Very cool music. I like the 'old sound' they try to reproduce. It's really good. The writing catches its mood perfectly. Great job again, Dave.