I wasn't even planning on going out.

I didn't have any particular plans for any shows to see, so on a Saturday afternoon (this being the 18th of October, 2008) I was just casually reading through the MySpace bulletins when I saw one from the band East Hundred. It said "come see us at Trash Bar tonight". Now, all week long this band had been promoting their Philadelphia show. That is their home base, so I didn't think they'd be coming New York way any time soon. However, going to see them play when they did come to NY has always been on my "to do" list. And as regular readers of my blogs already know, Trash Bar is one of my fave places to see bands.

So, it didn't take me long to decide that, of course, I was going to see this show. 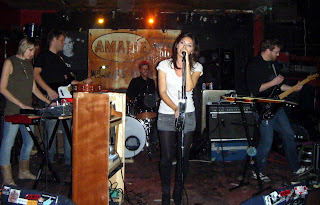 East Hundred are an impressive band that appear to be built in the Garbage (the band) mold. With a strong and dominant (yet delicate) female lead vocalist, surrounded by quality musicians, apparently content to play their parts with studied professionalism. 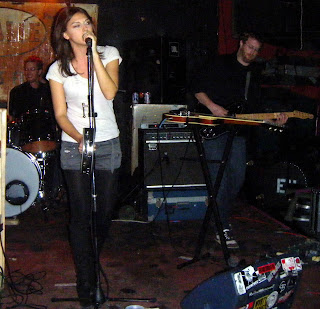 Much like Shirley Manson of the aforementioned Garbage, singer Beril Guceri is a pretty, petite woman with a rich and resonant voice. It is this voice that stands out on each and everyone of their songs. Beril credits influences like blonde redhead, mgmt, the duke spirit, the raveonettes, depeche mode and kylie as artists she admires. 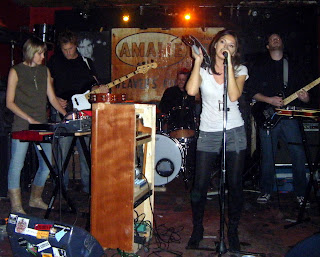 In fact, the band shares another similarity with Blonde Redhead, in that the core of the group is comprised of two brothers (though not twins) who play drums (Will Blair) and guitar (Brooke Blair) respectively. Rounding out the band is quintessentially "quiet" bassist Dave Sunderland, and angularly attractive female keyboardist Susan Gager. 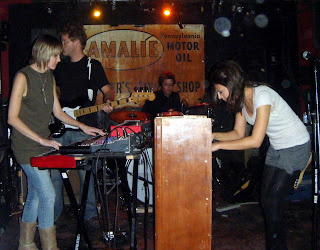 Beril also plays additional keyboard and evokes special vocal effects (from a second microphone) in that myserious looking brown box there. Its just one more unique quality about this band that makes them so appealing. 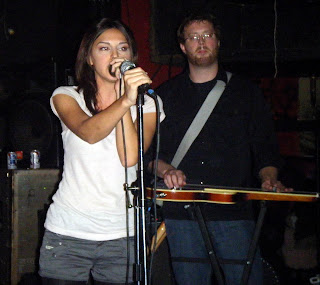 Give a look and listen to them playing live on this night, here doing "Slow Burning Crimes":
http://www.youtube.com/watch?v=PZZtlRrzTOs
Their music is anthemic. Its radio friendly and loaded with give-you-the-chills hooks. The choruses are big and dynamic. Yet their sound remains quite rooted in what has been deemed "alternative". I really like the way the two women blend their hooky keyboard lines at key moments of the song. 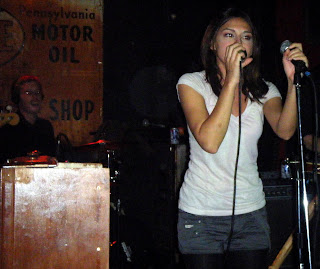 Despite evidence that drummer Will Blair is a keenly aware, sarcastic individual (see the band's MySpace page and the videos there for evidence of this) - on stage he grinned through much of the show - like someone who is just truly happy to be playing out live.

Beril displays all the qualities necessary to front a band. Great looks, a beautiful voice and a confident, genuinely friendly personality. When the music is playing, its quite easy to fall under her spell.
Check out another clip from the show, this one "Numbers":
http://www.youtube.com/watch?v=6W1H1uA5LdA 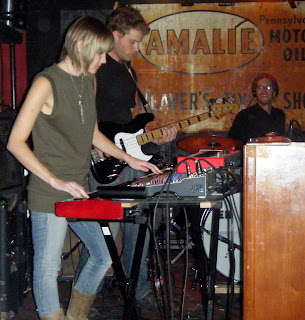 Susan's keyboards give the band a decided link to all those great 80's and 90's-era bands that dominated the music scene then. Bits of The Cure, Depeche Mode and even (gasp) The Thompson Twins are swirling around in those synth patches. Bassist Dave drives along the rhythm with precision and an elevated musical sense. 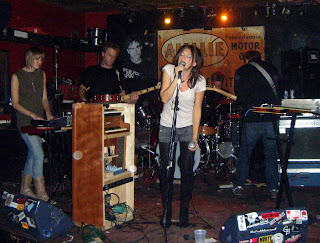 Listen in on this next clip, "Sigh and Wave":
http://www.youtube.com/watch?v=pGCsU0XW8ow

The bassline is classic Simon Gallup Cure. Beril sings so emotively here. At times I'm reminded of The Sundays and wonderful Harriet Wheeler.
I hear elements of many classic and unique vocalist referenced. The "uh, oh!" of Bjork on "plus minus". The sugary smooth "ooooh, oooooh's" on "deadpan" and "autopilot". The lineage is all there. Referencing the best that classic alterna-pop has given us in the last two decades. Yet each song is uniquely their own. 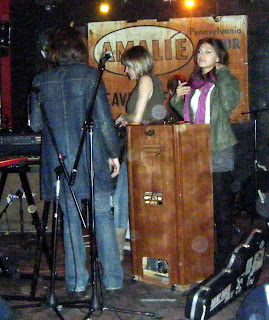 Overseeing it all was the watchful eye (and ear) of soundman Nick Vivid. You can always count on impeccable sound with Nick behind the controls. In addition to being a top flight sound engineer, Nick also is a musician in his own right, and plays a dazzling, smoking (literally) guitar!

Opening the show was a new band to me called SheKeepsBees
Brooke from East Hundred urged me to check them out and I'm glad I did. 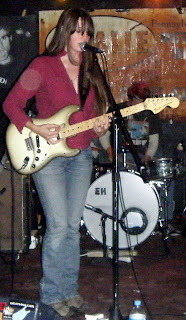 The band consists of the increasingly popular 2 person set up - initially established by The White Stripes and The Kills.
Singer and guitarist Jessica Larrabee is out front, while Andy LaPlant provides the drums (in the live setting) and handles the recording aspects back in the studio. 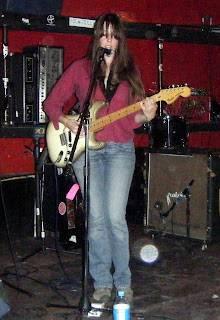 Since I'm a sucker for long-haired, low voiced rock women playing their raw version of delta blues - I was immediately drawn to this performer and these songs.

Jessica sings in a powerful, blusey voice - all the while crunching out dirty guitar chords throughout. 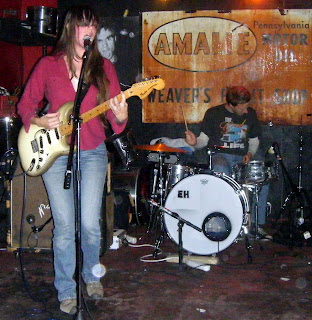 Dig this clip of of their wonderfully suggestive song "Gimme"
http://www.youtube.com/watch?v=0udZsJLIy6Y
In between songs, Jessica chattered to the audience in a conversational style that was part informative and part thoughts-in-her-0wn-head. It was an energetic, self-effacing patter than was only neutralized by the start of each successive song.
Songs like "Wear Red" remind me of those rubbery, organic bluesy Led Zepplin songs like "Friends" and "Celebration Day". Stripped down and minus the bombastic Jimmy Page production (naturally). But the spirit and vibe is similar. Whereas the song "Strike" is darker and more ominous. It slithers like a snake - that is until the tempo changes and Jessica soulfully wails. "Cold Eye" is a low-note driven groove, not unlike The Raveonettes "Bowels of the Beast". Its dark, menacing and powerful. Dramatic drum breaks puncutate the spaces between Jessica's vocals, till it all builds to an emotional peak.
Brilliant stuff. 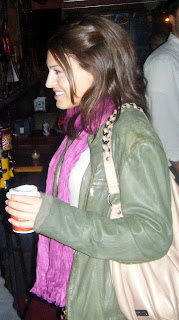 Before and after the show, East Hundred's Beril took time out to meet and greet her fans and friends. 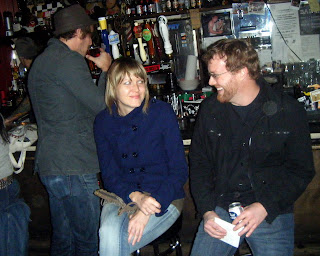 Here East Hundred's Susan and Brooke enjoy the ambiance that can only be The Trash Bar. 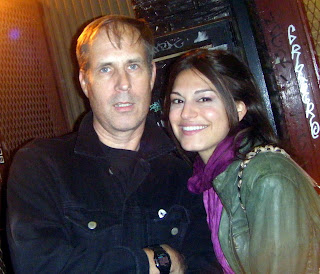 Post show, Beril insisted that I take a photo with her. Or did I ask her? Well, one of us wanted the picture. 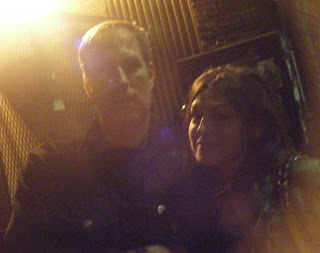 Another take on the same pose - taken seconds later by band friend Diedre (who happens to be a Picture Editor at Time Magazine, so apparently these artfully lit shots are second nature to her). 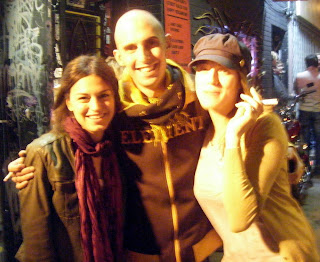 Beril and Diedre surround a contented friend.
It is always my pleasure to discover great new music.
Both East Hundred and SheKeepsBees fall firmly in that category.
Check out East Hundred here:
http://www.myspace.com/easthundred
http://www.easthundred.com/
And SheKeepsBees here:
http://www.myspace.com/shekeepsbees
http://www.shekeepsbees.com/ww.shekeepsbees.com/
And be sure to enjoy a tater tot while listening to them.
East Hundred have a new album titled "Passenger" coming out in early 2009.
They've also got some shows coming up:
Nov 5 2008 9:00P
Silk City
Philadelphia, Pennsylvania
Nov 7 2008 8:00P
The Note
West Chester, Pennsylvania
Nov 20 2008 10:00P
M Room
Philadelphia, Pennsylvania
Nov 21 2008 8:00P
The Velvet Lounge
D.C., Washington DC
So check them out if you are in the area.
SheKeepsBees has a new album titled "Nests" that is out now and can be gotten at
Other Music
http://digital.othermusic.com/search/full.php?UID=305911/
They also have a show coming up on Nov 21 2008 8:00P at
Smith College
Northampton, Massachusetts
Posted by DaveCromwell at 6:24 PM