The Indelicates continued their whirlwind mini-tour of the New York Metropolitan area with a show for Club NME which is held on Thursday nights at The Annex. 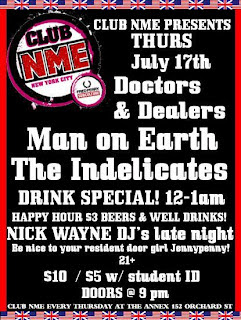 Before the show, I caught up with the band as they dined a the world famous Katz's Deli on the lower east side of Manhattan. Everyone was in fine spirits, after taking a few days to see the various sites (Coney Island, automobile trips to Mystic) in this Tri-State region.


Heading over to the venue we arrived in time to catch the opening band - a very friendly and intersting band from Sweden called Doctors & Dealers. 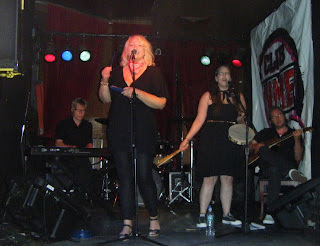 In addition to having some unique vocal stylings, I was amused to see such a variety of small percussion instruments employed throughout their show. I later learned that they simply bought these percussive instruments as they moved from city-to-city here in the US, as they couldn't really bring much with them from home. Very clever. 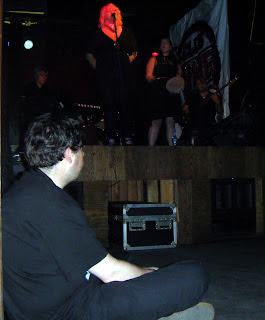 Simon Indelicate takes in the show.


In between performances, the master of extreme facial expression - rhythm guitarist Al of The Indelicates kept things energetic and funny - as we tried to get some photos taken. 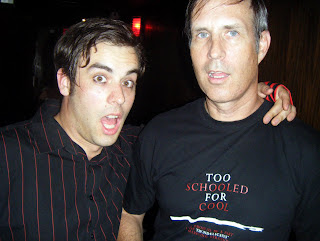 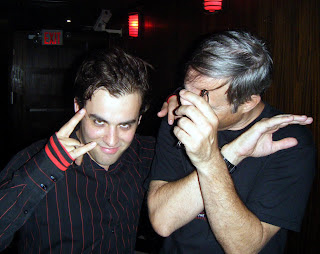 No, don't take the picture now - I'm grinning like a fool. 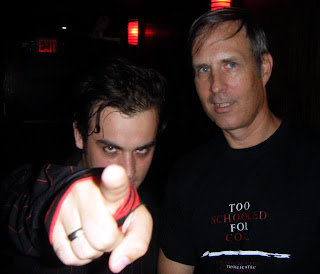 You - You know what you've done!

Silliness over, it was time to carve out the set list.

Oh, yes - all the quality tunes are here.
Still time for a bit of an outdoor chat, we flipped on our respective recorders for a bit more footage:
http://www.youtube.com/watch?v=iU8A0e9CCR8

Middle band Man On Earth having wrapped up a rollicking set that had myself and bassist Kate doing crazy dance moves at each other - it was soon time for the headlining The Indelicates to come on. 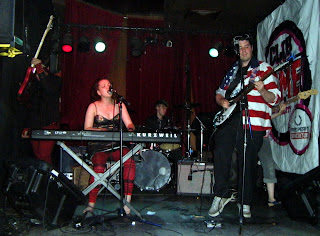 One of the (many) things I love about The Indelicates is how almost effortlessly they play this sophisticated music. Julia's classical piano playing somehow meshes perfectly with Simon's dynamic rock guitar. Yes, they are a "rock band" in the traditional sense - structurally - so there are never any self-indulgent chord changes or "prog rock" trappings - just to show how well they play - yet they do (play well. Very well). 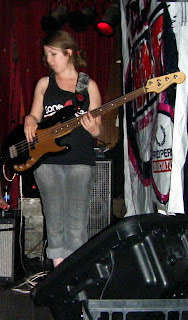 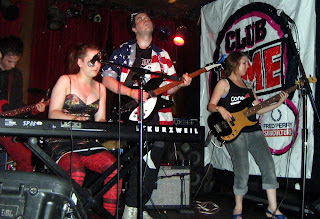 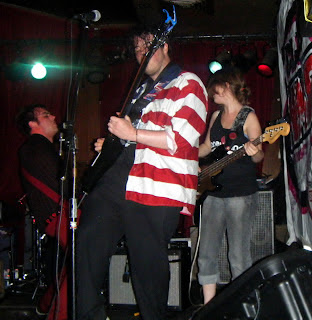 I don't think anyone "pulls faces" better than rhythm guitar man Al does. He practically mimes the entire song. You can often catch him leering inches away from Julia's face (often unbeknownst to her, as she concentrates on singing) - only to lurch away in a split second, giving the big up to what comes next in the song. That said, his rhythm guitar playing provides texture and depth to what Simon is playing. And when Simon occasionally puts the guitar down, you then realize that Al is more than competent at the six string instrument. 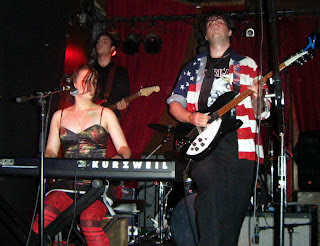 Ed's drumming impressed more with each show I attended. For someone who revealed to me that he started out as a guitar player - you would never know it, with the way he ferociously attacks his drums. Besides the appropriate propulsion, the attention to detail of the rhythmic changes throughout each song added an important dynamic. 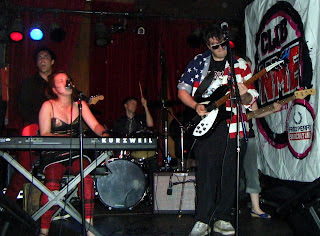 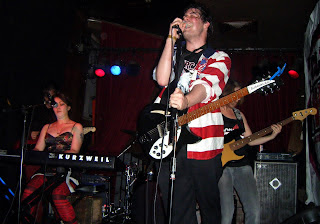 Passionate vocals - but watch out for unexpected lyrical twists.

For instance, there is this performance of the indescribably beautiful "Unity Mitford"
http://www.youtube.com/watch?v=nN1QB79q-ug 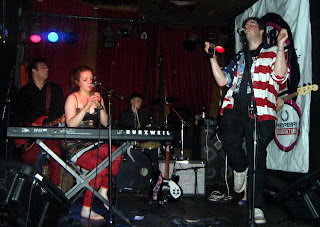 Now equipped with her flute here for "Julia, We Don't Live In The 60's" - while Simon appears to be doing some form of Riverdance. 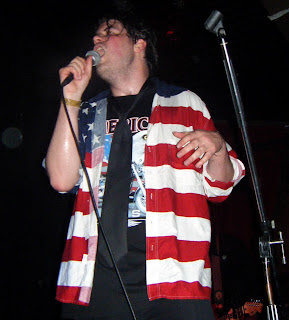 With Simon and his Indelicates - ultimately is all about the lyrics. The storytelling. There is never a throwaway line among them. Each word is carefully thought-out and properly placed. 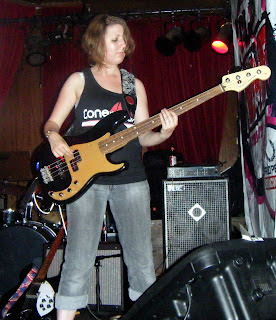 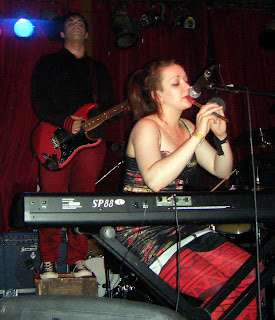 Is it a pennywhistle or a flute? Does it matter what you call it? 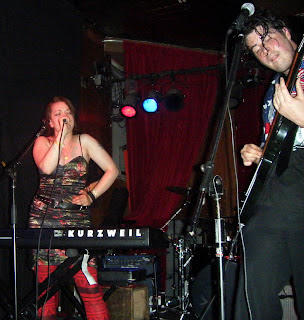 Julia steps away from the piano to sing "Our Daughters Will Never Be Free". Don't try to tie her to a kitchen sink! 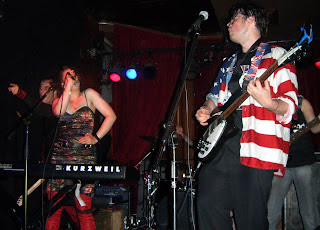 Outstanding.
After the show we headed back uptown for some additional chat:
http://www.youtube.com/watch?v=enZpQHO5e2g
In addtion to that, everyone decided it would be a mad good time to have sandwiches and coffee on the luxurious street bench across from the hotel. Hence the now legendary "bench coffee" (tawk)
http://www.youtube.com/watch?v=JcbT5en0XaE
Good times, and the big grand finale headlining show still to come the very next night!
Posted by DaveCromwell at 12:46 PM

Great job, Dave. Your passion for Indelicates is clear. So is your love for the music in general. I enjoyed reading it.