The Jesus and Mary Chain - live in Philadelphia

Never underestimate the power of a song.  That combination of poetic imagery through a collection of words, combined with soundwaves that repeat in appealing patterns.  This is a force that can only be harnessed while never fully controlled.  There is magic in this process, and those who can connect to this power are enriched beyond any kind of monetary reward.

The Jesus and Mary Chain have written and recorded many truly amazing songs.  To the unaffected, they may appear simple and meaningless.  To "anyone who's ever had a heart" (to quote one of their primary inspirations) the joy this music brings is almost limitless.

What happened there was nothing less than magical. 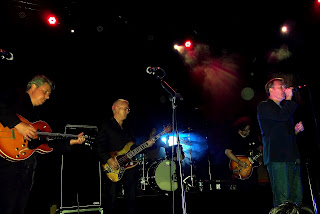 The blend of accomplished musicianship with live uncertainty always adds an element of chaos to their concerts. 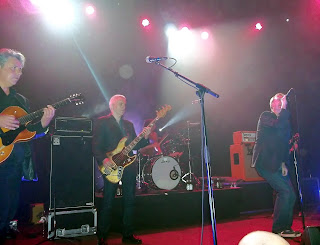 John, Phil and Brian provide a solid foundation for brothers Jim and William to spread their own particular gospel to fans everywhere. 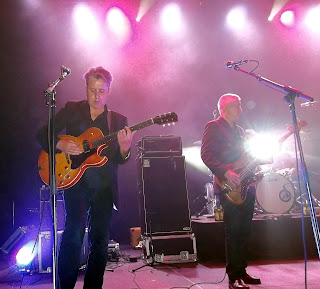 Positioning myself to the left of the venue, gave a birds eye view of John and Phil's quality musicianship. Light beams seared across your field of view as the music enveloped the senses. 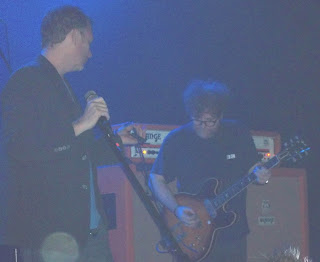 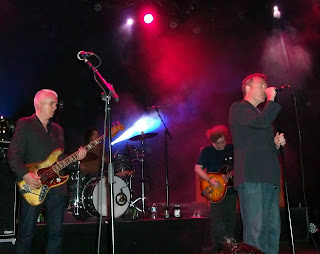 Lighting bolts appear to burst from underneath Phil's bass as the band faithfully recreated one classic track after another. 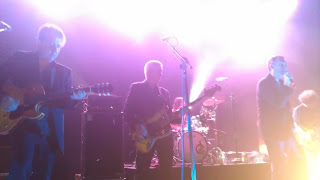 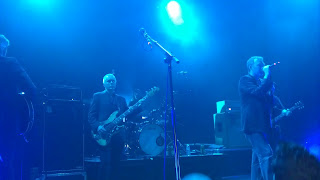 and I guess that's why I've always got the blues 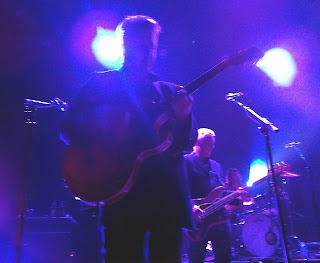 John made frequent use of the space in front of me, much to the delight of our section.  Here he leads a psychedelic trio. 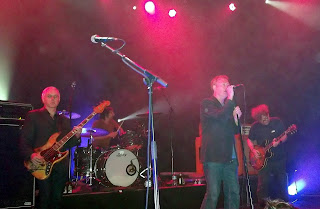 I want your candy 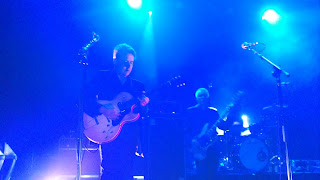 The hardest walk you could ever take, is the one from A to B 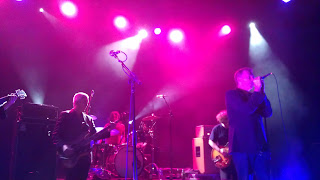 What could make this show any better?  How about the fact that my friends The Vandelles were opening the show!  They put on an amazing performance themselves (photos of them further down), but here in the video I shot (and I apologize for my recorders audio limitations and flaws) bandmembers Honey Valentine and Lindsey Ann join me in the crowd for dancing and singing along with our favorite band!


In fact there were more than a few fellows of our dreamgaze community in attendance, including great guy Tom Lugo, who makes wonderful music via a number of projects.  More can be found about all that at this link:
http://www.patetico-recordings.com/

The night just continued to get better.  Right before the band would play their big blowout pre-encore number ("Reverence") - John Moore handed me an all-access pass from the stage.  My correspondence with him over the years had certainly paid off in this particular moment.  I will be eternally greatful for this act of generosity and kindness. 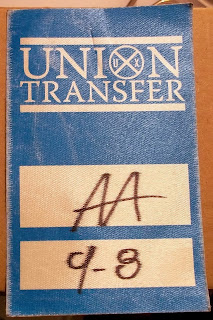 Earlier in the evening, the one and only Vandelles opened this night of music. 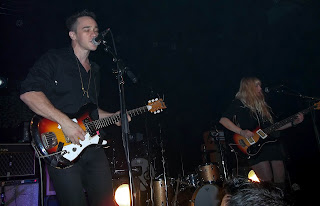 Jason has retooled and streamlined his own particular vision into a solid three piece unit. 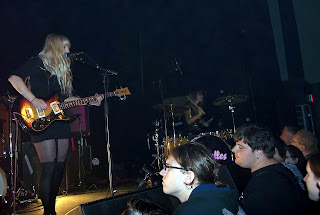 Now with Lindsey Ann on bass and background vocals - and original drummer Honey Valentine still holding down the crash-and-mayhem, the fans of Philadelphia were totally into it. 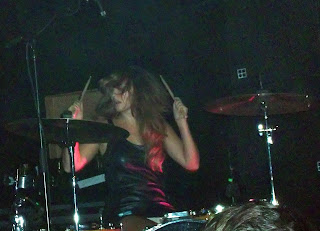 Shiny dress and hair flying - who else but Honey Valentine? 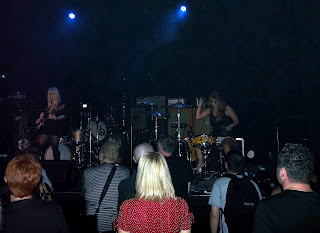 It was great to see and hear this band play in such a nice big venue.  The sound system was excellent and the locals were appreciative of the music they were hearing. 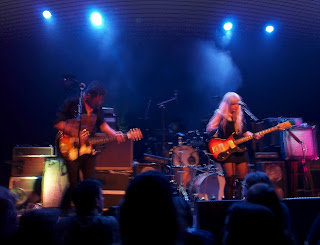 Cowboy killers got no chance 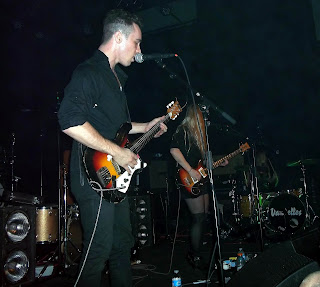 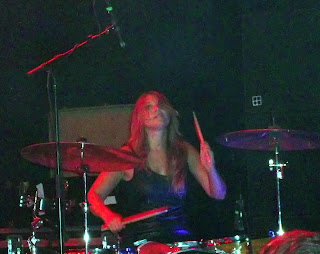 
Like all good touring bands, there is much quality merchanise to be had. 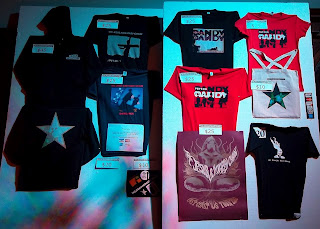 Including these nice looking t-shirts, tote bags and hoodies.


But what went on backstage?


Well, for one thing - I finally got to meet John Moore! 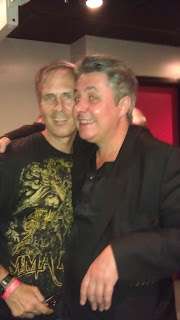 John is as funny and charming as everyone has said. 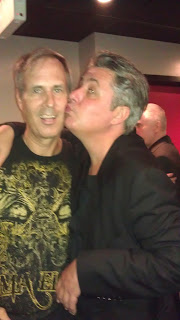 I'd like to say this is something John just wanted to do on his own, but truth be told - Lindsey Ann put him up to it.  Hey - I'll take it!

Playing the part of a perfect host, John invited me into the band's inner hang out room to have a bit of a chat.  William, Jim, Brian and Phil were all in and out at various times.  John asked me how I got to Philly from New York and I told him by Bus.  This inspired William to tell us a funny story of his own experience.  As William told it "one time I took a bus trip from New York to Florida with my friend.  But my friend died along the way."

Wait a minute!  That's what happened in the movie Midnight Cowboy!

Both William and John proceed to crack-up laughing, practically falling over each other.  It would be no stretching of the truth to say that these two boys like to party hearty! 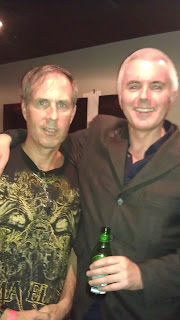 Phil King, on the other hand, is the steady rock of English stability.  A serious man who's intelligence and talent makes him instantly likeable.  It's easy to see why the brothers Reid continually ask him to be in their band.  A great musician who never makes a mistake, quiet, reserved but still fun enough to be part of any traveling road crew. 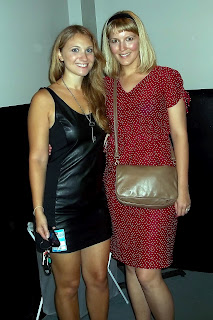 Honey Valentine backstage with her good friend from College.

I know she would agree with me that this was a night of many memorable "MaryChain moments."

Posted by DaveCromwell at 11:10 AM

I love the way you connect with the JAMC aesthetic.

See you later this week...

JAMC.......Viewed thru the prism of 21st culture & the music it seems to embrace......Possess the kind of elemental timelessness that other bands strive for and never achieve. Strong songs & vibrant performances are a hallmark of a band comfortable within it's skin....unafraid to grown & adapt while eschewing the trendy geegaws of the day

I couldn't agree more with the above comments. Jim captures it all in the very first thing he says to the crowd - "we're the fookin' Jesus & Mary Chain!" - and then they lurch into Snakedriver. In an instant - you are immersed.

lovely photos, videos and especially your prose on this particular show.

Excellent Dave! Very nice photos, seems like was a super night! Great band and songs..trapped me... I like their style. :)

this one slightly differs from your some past blogs as her i can feel that hardcore fan atmosphere.

as this is not 1st time i hear JAMC it is cool to read some insights.

all in all really enjoyable piece. :)

I wear my "hardcore fan" designation like a badge of honor.

There are few bands I will say that about.

This one - the top of that small group.

As for The Vandelles - they always look great.

here is another video from that show,

"we're the fookin' Jesus & Mary Chain!" Haaha that says it all. Looks like an occasion to file under "L" for legendary. Looks amazing, I bet The Vandellas had a blast too.

The merch looks rather good. I think I'd of bought every item.
LOM Did someone just call John Moore Jay Leno ! Hahahahahaha!

Yes to all of the above, Von Pip!

Most excellent review,looks like you had a great time.Thanks for the pics too.I'm getting geared up for the 15th in Detroit and possibly the Grand Rapids show cant wait.

Great write up, sounds like the show was great and you had a blast.
Let me know if you need the show on audio, someone posted an audience recording on Dime a Dozen.

Somebody just posted this show up on the Jesus & Mary Chain forum.

You can find that forum here: