Fresh from Britain comes a new punk band dubbed The Thlyds, and their debut album "Thalidomidas Touch." Presenting their "art" with the same sneer and bile as fellow Brit innovator Johnny Rotten before them, The Thlyds take their "class warfare" even further with a no punches held attitude. 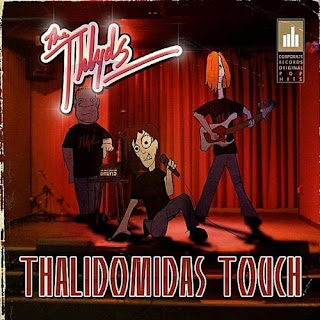 The thing about The Thlyds is - they actually DO rock. "Clever Stuff Is Stupid" is chanty but synth buzzing with a clap-trappy backbeat. "The True Price Of Kent" rides along bright tambourine and arena-rock guitar stylings as those annoying (but sometimes neccessary) "journalists" are called out for the bloated, pompous good-for-nothing waste-of-spaces they are. "Bored" comes on even more guitar crunchy, with organ accompaniment filling out the melody line. It's quite the toe-tapper as lead vocalist (and mastermind) Thorton Halfwit sings about "stealin', drinkin' and tearing posters down" in a town that simply fails to stimulate. The fact that he's "probably got depression as well" can't take away from what will clearly be a communal sing-along song! 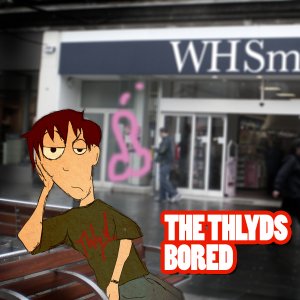 "Burn England" weaves synths and sirens together with the classically lyrical "travelogue" song (think legendary tunes like "Route 66") as Thorton and his band (featuring Bog Standarrd on drum machine) take you on a tour of English cities. "Song About When Lewis Met His Real Dad" (band guitarist Lewis Drebb) combines chugging guitar with an infectious (nay, make that infected) dance beat that's sure to have your booty shaking. The fact that the lyrics are so sad - Lewis's dad doesn't want anything to do with him, you see - still can't bring down this party raver. "I don't love you, I don't need you - I never wanted to bathe or feed you" is how the gentle refrain goes. 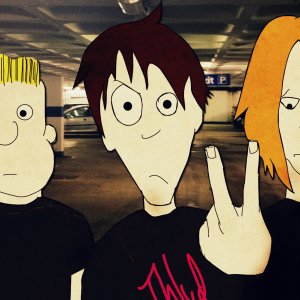 Following that comes without a doubt the tenderest love song on the album. Featuring the guest vocals of none other than the celebrated Karen Condom on "I Fingered You." Among her many contributions to this lovely duet, the explaination that " you said you was in a band, and you held my hand," provides more than enough reason for this act. Any subsequent references to "rage and pain" can only come from the fact that "heyyyy baby - it didn't mean a thing." "I put a heart round your name on my pencil case" is how the love begins "but then I took it away and put a knife in it's place" is sadly, how so often relationships sour in these modern times. 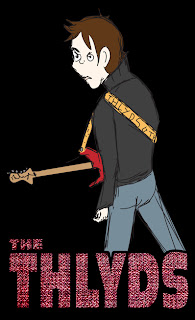 Songs referencing the British Queen and reasons for not seeking "traditional" employment are covered as well. Chugging, crunchy guitars are particularly tasty on the "Queen" track, while calypso rhythms and synth twiddles permeate the "bentest" grooves of "If I Wanted A Job."

The timely and oh so topical "Let's Have a Riot At the Olympics" present it's on-point message, while smoking hot lead guitar riffs burn throughout.

Check out that track and it's accompanying video here:

"Filler Track" takes the blues format to new soaring heights, as a scathing lyrical rebuttal to record company demands. Insisting on an album that was "longer" ("make this right, not wrong-er") Thornton looped-and free associated a "lyrical flow" that (as he so accurately declares) is "shit hot - it don't stop - till I reach the top" and that "it don't get no ill'er."

The album closes with a 7 minute epic "This Town (Song for Karen)," which presents the sobering realiztion that "love is for losers" and "nobody loves us" so why not "lie in the gutter and look at each other?" Despite what some might perceive as "negative" lyrcial content, the uplifting melody and triumpant rally-cry chorus is sweepingly grand. After all, who can deny the reckless abandon of young lovers who declare "let's go driving - let's get arrested. Let's give each other chlamydia and never bother to get tested!" This kind of "go for it" spirit gives hope to every hard luck kid that ever had to "burn down" their town to feel alive!

Find more about this breakthrough band and how to order the album at these links:

Posted by DaveCromwell at 6:15 PM

Interesting band. Can't say I like their music though. But a great review ;)

Without a doubt they are an "acquired taste," Anouk. Whether that "taste" leaves a bad one in your mouth is certainly a personal preference for sure.

Still, one might view the "merits" of this record as a definitive statement on the current state of anarchy in the UK (and perhaps places elsewhere as well).

I love this album!

Very nice review Dave! Nice band, i like the song "This Town (song for Karen)"!

There you go! Some positive feedback on an album some might find a bit "abrasive" ;-)

"This Town" IS a lovely song.

ahahah lovely just lovely! btw amazing cartoons or pics or whatever that is (excuse my poor english) I really like this review Dave!

Those cartoon caricature representations *are* good, Ivanka! I'm reminded of the band "Gorillaz" when I see them.

punk is in the air again over i the UK- Richard hawleys latest album too is full of punk songs speaking out against the governement and all the many other problems.

Can't say I'm into their music at all but I loved reading your review.