Alabama raised Allison and Catherine Pierce have made their mark on the New York music scene for over a decade. Managing the ups and downs that a professional musical career goes though in this era has been no easy task, but these talented ladies have done so with impressive class. With four albums now under their belt, their latest "You and I" is at last garnering them the attention they most certainly deserve.

Presented here in two parts is a video interview I conducted earlier this year.  Additionally, a phone interview was done with the blonde half of the duo, Catherine Pierce – a month or so later.  What follows in print is a combination of the two interviews.  As you can see, both Allison and Catherine graciously answered all questions put to them with wit and sweet southern charm.

During your live shows you exhibit great confidence and appear to be truly enjoying yourself. Do you ever get nervous and worry about performing?
The key to winning the crowd over is to be relaxed and not so self-conscious. I find that meditation helps a lot with anxiety issues. Sure, there have been times when you worry what if nobody shows up. Fortunately for us we have a loyal following whom we can't thank enough. 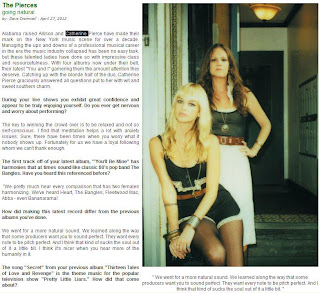 The first track off of your latest album, '"You'll Be Mine" has harmonies that at times sound like classic 80's pop band The Bangles. Have you heard this referenced before?
"We pretty much hear every comparison that has two females harmonizing. We've heard Heart, The Bangles, Fleetwood Mac, Abba - even Bananarama!

How did making this latest record differ from the previous albums you've done.
We went for a more natural sound. We learned along the way that some producers want you to sound perfect. They want every note to be pitch perfect. And I think that kind of sucks the soul out of it a little bit. I think it's nicer when you hear more of the humanity in it. 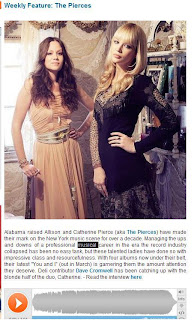 The song "Secret" from your previous album "Thirteen Tales of Love and Revenge" is the theme music for the popular television show "Pretty Little Liars." How did that come about?
Someone made a fan video of it on YouTube and readers of that book series kept writing to us to say how perfect it would be for the show. The video they made - they made it before the actual show was on. So there was an odd synchronicity to it all. Then one of the girls who stars on the show suggested it to the producers. She said that this song would be perfect, so they called us up and asked to use it. 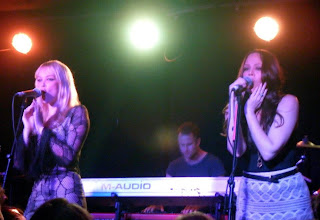 What is the songwriting process like? I've noticed that album credits tend to list you or your sister separately and only rarely together in collaboration.

Mostly we write separately. On this latest album we wrote "Kissing You Goodbye" together. Allison had an idea for a melody and we sat down and hashed it out. 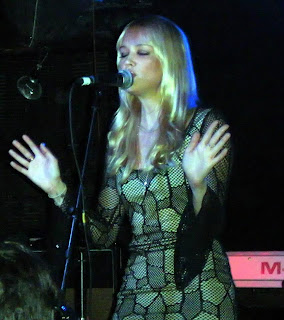 It's been noted that you are avid readers. What have you been reading lately?

I've recently read the Steve Jobs Biography. We got Kindles last Christmas from our lovely manager and I keep downloading book after book so now I have, like 20 books lined up to read. 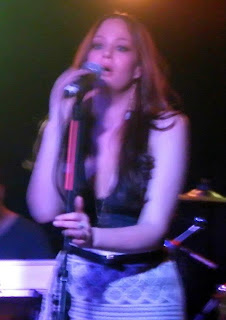 3. What it is: For those who like sweet female vocal harmonies and heartfelt lyrics.

4. For those who like: Fleetwood Mac, Simon & Garfunkel, James Levy

5. Relevant info: Performed their single 'You'll Be Mine' on The Tonight Show with Jay Leno in March. Headlined shows in New York, Los Angeles, and Austin (for SXSW) and supported Coldplay on their recent US tour. 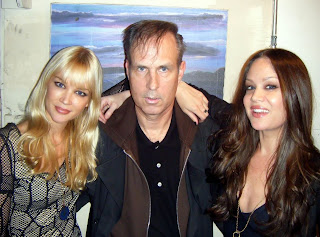 On The Deli Mag:

Posted by DaveCromwell at 11:47 AM

cute! absolutely great interview! loving the videos and photos. And especially the last one with you and girls :)

But the real star here is that video interview. Their warmth, charm and sense of humor shines right through. And they make such beautiful music.

You know it, Paty. I have been singing their praises here and elsewhere on the internet to you (and everyone else) for a while now.

It's quality stuff that they do.

sweet.
1st i got to confess, i kind of might have a slight crush to the dark haired girl from this due after this interview). :P
and i was angry on you when you cut them singing by sayin' something. now i got over. but it was cool. (singing)
i kind of found groovy them not reading bios and not giving a damn when they're compared to something even boring. :)
and nice spin with that nicleback joke. (though i kind of like some nicleback songs in a way)
and after pic with cute girls you should say - "you been arm-charmed bry cromm" :D
good.

As you know I'e been a fan of theirs for a long time so its nice to see them doing well but that they haven't sacrificed anything in their music to do it- but it does speak volumes to the importance of having friends in Coldplay, something ithink we can all aspire to

I really enjoyed reading/listening to this interview Dave! They appear to be very nice. It must have been great to interview them :)

Truly both Catherine and Allison Pierce are a pleasure to do an interview with. Along with their obvious physical beauty, their personalities show two very grounded women who have a firm grasp on their place in the word (and this music scene in particular) - as well as their opportunities in front of them.

I am happy to share this time and space with them!

Poor Nickelback! Hahaha! Great interview Dave...they seem like very cool, down to earth, very versed in music knowledge, and dare I say..."normal" people. I shame myself by saying I don't own any of their music. I've written things down, thought about purchasing, but never have. That's going to change. Again, thanks for the great listen/read. Off to YouTube to check out more of their videos before bed.

Yeah, you definitely want to pick up some of their music for sure, Davey. The latest album is really good, so I would start right there!

This is very interesting. Call me crazy...but i hear vague echoes of Patience & Prudence

I would never accuse anyone of being "crazy" for their own particular "vague echoes," The Grim Reefer.

I DO see the similarities:

Their time in the spotlight was brief, but these two young sisters, Patience and Prudence McIntyre, will always be remembered for two songs, "Gonna Get Along Without You Now", and this hit from August of 1956, "Tonight You Belong To Me". Their father, Mark, was Frank Sinatra's pianist during the 1940's after Frank had left the Tommy Dorsey Orchestra.