You have to admire the panache of a band who describes their sound as “tremolo-haze headphone symphonies.” Such is the case with Brooklyn’s Spanish Prisoners. Their album “Gold Fools” is set for an October release, and contains a number of outstanding tracks. “Los Angeles Guitar Dream” weaves deep toned single note guitar melodies with lively cymbal rushes. Notes struck with authority and pitch bending tremolo are emphasized. Lyrics tell a story of plans gone awry: “She put a cigarette in the tip jar. But she – she never phones home. Acid blue smoke rises. His temper gone broke. Los Angeles Guitar Dream – was a hoax.” Clear glockenspiel-like note accents (so popular these days) contribute further to the melody. There’s a spoken word segment in the middle, giving the whole thing a cinematic quality to it - as if you are watching a film. “Rich Blood” evokes a breezy, soul-inflected world (dream like atmosphere, falsetto vocals). “November Third” makes effective use of various keyboard tones allowing for dramatic sonic buildups from quieter passages. Lyrically the subject of “life and death” come up. 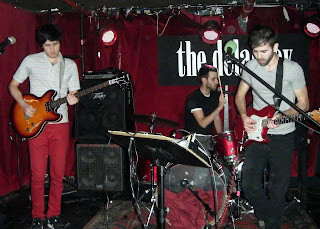 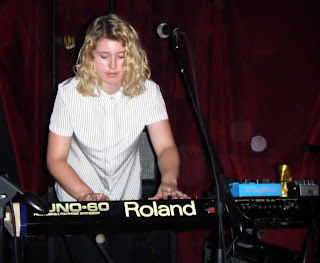 In addition to seeing them play live twice during this year's CMJ Marathon here in New York,
I conducted this interview with frontman Leo:

Is the story to your song “Los Angeles Guitar Dream” based on any kind of personal experience? Or does its lyrical content come from an observation of someone else? Or purely from the imagination?
“Los Angeles Guitar Dream” was written when I spent a few weeks one summer living in Los Angeles with my girlfriend. She had moved there for an ill-fated internship at a record label that basically amounted to her working in their factory, taking orders, and sitting in traffic. I spent most of the trip driving around by myself, getting lost in LA, and wondering if all those who had flocked to LA found what they were looking for. I began to imagine this female character that had been promised fame and fortune but upon arriving, she got trapped in this really abusive relationship and ended up blaming this “dream of making it” for her personal situation. I get very caught up in the myth of LA, especially when it comes to movies. A lot of my favorite movies take place in Los Angeles and involve the city very deeply in their plots.


What sort of inspiration might lead to the creation of your song “Rich Blood?” Is some of the softer 60’s soul music ever on your listening playlists?

I definitely love older 60’s soul music- OV Wright is a particular favorite- but I wouldn’t say that kind of music was inspiration for “Rich Blood.” This song was more inspired by a lot of 4AD / Factory records- Cocteau Twins, the Durutti Column, OMD- music that puts a lot of emphasis on texture. It was my attempt at creating this really detailed atmospheric land for you to get lost in. The lyrics are very similar to “Los Angeles Guitar Dream” in that there is an unnamed act of violence and an underlying tension, which is why we placed the two songs next to each other on the album. 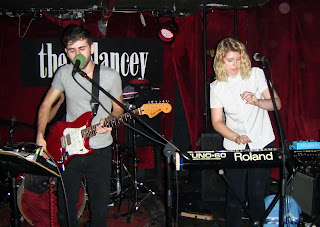 One would presume the song title “November Third” refers to a significant date. Can you shed some light on and explain a bit about what this song might be about?

The date in the title is actually completely irrelevant to the lyrics. It’s just the date I started writing the song. We tried to come up with another title but that one kind of just stuck. Lyrically its one of the more ambiguous songs- a lot of our songs combine very specific imagery with very abstract situations. In this case, again there are two people who are being pulled apart- you could say the hurricane is metaphorical. Notice any trends developing?

Check out the band performing "November Third" live on the final night of CMJ- October 22, 2011 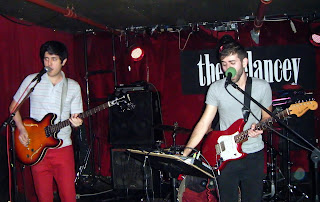 “Slow Decay” rises from the ether on cymbal rushes, clean slightly reverb enhanced guitars and crisp snarecrack. “Everything I write is a letter to the future,” is one revealing lyrical turn, while the repeated (and therefore emphasized) refrain “else, else – something else” follows. The track ultimately devolves into less-defined atmospherics. Talk a little bit about what your mindset was when writing, then recording this song. What would you like the listener to experience when hearing it?

The song was written and recorded simultaneously- most of the songs on the album were written that way. I very seldomly think about what I want the listener to experience when working on music- that’d make the process much harder. I suppose if I had to say, I’d want the listener to go on the journey this song takes- to be a willing passenger in the voyage and evolution / devolution of “Slow Decay.”
Listen in as the band performs "Slow Decay" live on the opening night of CMJ
- October 18, 2011 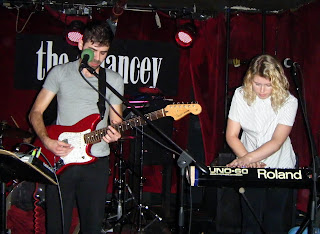 “Lipstick Under The Table” has a slow shuffling rhythm with alternating call and response style vocals. There are hints of funk guitar lines merged with additional atmospheric textures. Falsetto vocal segments continue the impression that an attempt at what has been commonly referred to as “soul music” is being made here. Is this a make out song?

I’ve never thought of it as a make-out song but I’d be thrilled if anyone was making out to any of the songs on this record. I think experiencing music with others is the best way to listen to music in any sense. 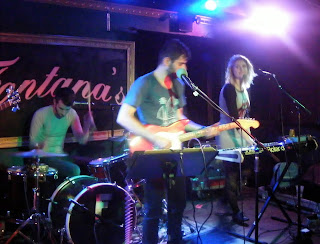 Some of the band “interests” listed are “rooftops,” “the ocean” and “national parks.” All are done outdoors. Even though you are city based in Brooklyn – do you consider yourselves the “outdoor type?”

I don’t really consider myself an “outdoor type” even though I love the outdoors. I think I’m influenced by images of the outdoors and experiences I’ve had outdoors even if I don’t spend much time actually out in nature. I’ve been camping once and frankly the experience sort of soured me on the activity- my best friend and I went for a few days with only one small flashlight and the battery went out the first night. In general I think I’m very influenced by my surroundings. I’m a very in-the-moment person, as opposed to a lot of musicians I know that are much spacier and live in their own heads. My brother is an architect and I think many discussions we’ve had make me much more aware of the space I’m in at all times. I need to be really comfortable with my home recording studio and everything needs to be set up just right before I feel creative. Having a window by my desk is invaluable. 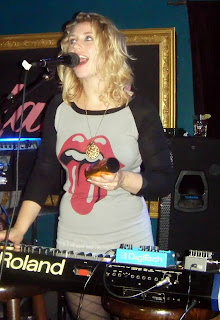 How much of your recording is done at home versus in the studio?

Almost all of our recording is done at home- no clocks, no time limit. We feel pretty comfortable working on our own. 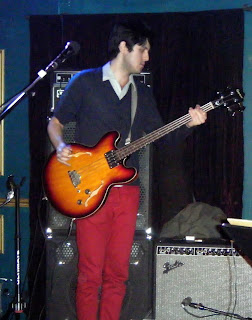 We recorded a few bass and drum parts at Seaside Lounge, where our bassist James works. Everything else was recorded and produced in one of our apartments, usually while drinking coffee. I like recording while not wearing shoes. 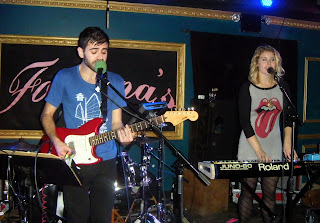 What are the pieces of equipment that you find particularly inspiring when recording at home?

I like Apple’s Logic Pro a lot- been using it for a while now and know it inside and out. Unfortunately my bandmates are Pro Tools users. We’ve had a few heated arguments about DAWs. 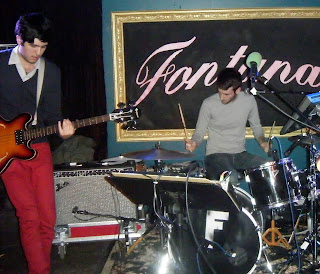 What one piece of hardware/software would you most like to add to your recording setup (cost not an issue)? Why?

It’d be great to have a nice, one channel preamp. Something like that the UA 610 I’ve coveted for a while. 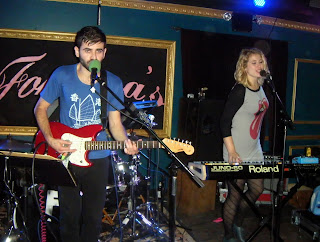 Do you use rack effects or guitar pedals to forge your own sound?

I’m a huge guitar pedal geek. I’ve spent way too much time playing with various fuzz and overdrive pedals. My bandmates make fun of me for how many different pedals I’ve had over the years. I’ve actually had several pedals custom made for me in the past. I think having a good overdrive pedal / amp combination is one of the most important things for defining a band’s sound. Specifically I like pedals by Fulltone and Throbak. 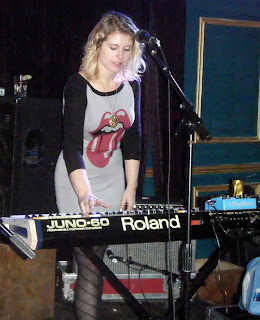 Is there a piece of equipment that you find particularly useful on stage?

One of my favorite purchases is my 1982 Roland Juno 60- a very popular synth for very good reason. It’s hard to make it sound bad. I’m a big proponent of buying a few pieces of gear and knowing them very well. It’s very comforting to me that I can get whatever sound I want out of the Juno quickly. We’ve had a few digital synths with menus in the past and I never realized how much of an obstacle that is to creativity. 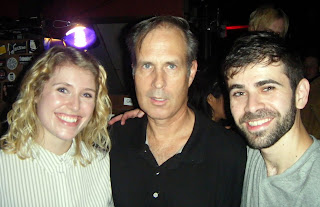 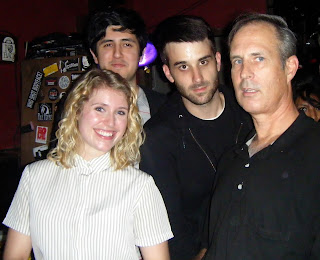 Find out much more about Spanish Prisoners at these links:

Great review Dave. I liked the idea behind “Los Angeles Guitar Dream” and the song itself is great too :)

Yeah, I thought the explanation behind "Los Angeles Guitar Dream" was pretty insightful. But, I'm glad to hear you like the tune as well, Anouk - cause that's where the real beauty lies.

I've been enjoying these songs for a while now, William. Ever since I started the interview process.

Getting to see them live twice during CMJ (they literally bookened the Fest for me - they were the very first and very last band I saw) - solidified my appreciation of what they do.

have you posted vids of them before? they seem familiar but yeah so much to like about them

My live videos featured here were posted on Facebook last week. So, perhaps that's where you first saw them, William.

One of my fave new bands!

I like the name of the band, very interesting. "Rich blood" amazing song and the name is kinda scary, mysterious...
that guy, Leo hehe I liked him too =)
another great review Dave, thanks for sharing this with us

nice piece.
as usual i loved interview!.
they sound like cool bunch of artists.

As for "Rich Blood" being an "amazing song and the name is kinda scary, mysterious," Ivanka - well Leo states that he wanted to create a "detailed atmospheric land for you to get lost in" - so hopefully that was accomplished!

I'm always pleased to find out that the live footage is so well received, Ironside.

Another "vote" for Los Angeles Guitar Dream, Paty. I have marked it on the ledger. ;-)

"Rich Blood" and "Los Angeles D" have similar instrumental intros (both beautiful) and different vocal melodies (both beautiful). I like how the group's sound is soft and sweet. Your questions question important musical issues, and this band, like the others you've posted, are happy to oblige and are charming.

Yeah, I thought this answer was rather insightful regarding those two songs:

"The lyrics are very similar to "Los Angeles Guitar Dream" in that there is an unnamed act of violence and an underlying tension, which is why we placed the two songs next to each other on the album."

Well stated to you, Spike - in describing their sound as both "soft" and "sweet" - though I think there is enough dynamic "harshness" in a number of the guitar parts, to keep it all planted firmly in the "rock" realm.