Everybody Was In The French Resistance...Now!

I had been looking forward to this one for quite a while now. Ever since this past December, when tracks from Eddie Argos' new sideproject titled Everybody Was In The French Resistance...Now! started to make their way onto my digital listening devices. When last seen aroud these parts, Eddie Argos was selling out five consecutive nights at The Mercury Lounge with his primary band - Art Brut. They came back to New York once more in Autumn - then word began circulating about this other project on the horizon.

While Art Brut took a hiatus after circling the globe a few times on tour - Eddie partnered up with his girlfriend and musician in her own right - Dyan Valdes of The Blood Arm - to create this project. 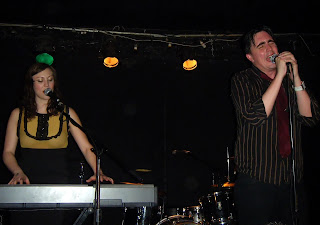 Finally they were here in New York to play their first of two nights on Wednesday, May 12, 2010 at The Mercury Lounge (the following night playing at Brooklyn's Union Hall).

I had caught up with Eddie via telephone the previous week - while they were still out in the midwest (somewhere between Minnesota and Wisconsin). I asked him about the constant touring, and if he enjoyed it. "I like it because you get a feeling as if you are in a gang. I enjoy traveling and like meeting new people. Then packing it up and going to a new location," he said. 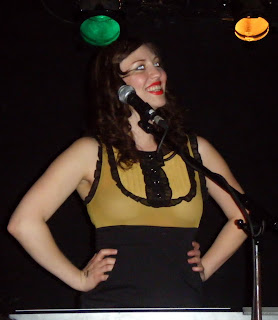 The song that sets the thematic tone for the band - "Creeque Allies" contains a number of names and historical reference checks. Eddie told me he was "a big fan of this era" (the WWII 1940's) and that one of his fave films is Casablanca. He also relayed that Dyan studied history at UCLA and was influential in selecting the band's name. Dyan also has a strong musical background - playing piano since she was 5 years old - and as such, she is responsible for writing all the music. Eddie, being the literary sort that he is, is predominanlty responsible for all the lyrics.

Watch and listen as they open the show in dramatic fashion - and then launch into Creeque Allies: 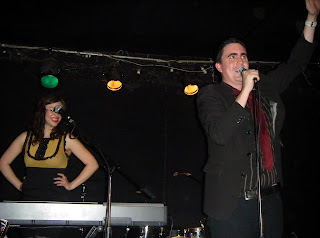 In addition to this introductory song - which conceptualizes the band's name - the entire collection of songs (and the album which accompanies it - Fixing the Charts, Volume 1) is written as a "response" to a popular (and sometimes not so popular) song that came before it. You can read all the wry explanations Eddie gives for each song via the links at the end of this piece, as I'd rather not rehash what has already been written and focus on, well, newer information.

On this next song, titled "(I'm So) Waldo P. Emerson Jones" Eddie mused to the Mercury Lounge crowd that he'd come to the realization that everyone just might not be as familiar with the Archies comic book character this is based on, as he is. I had to agree with him there. Nevertheless, it's an extremely catchy song, and very worth a listen. 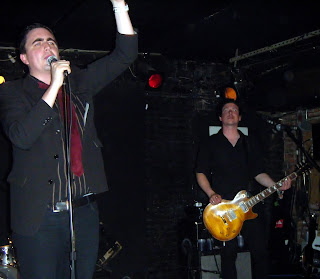 Dyan's sweet background vocals once again provide a musical base for Eddie to tell his tale. 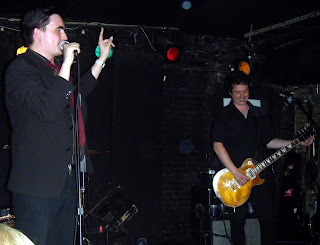 Eddie brings a smile to everyone's face as he reveals how he might possibly be the offspring of Michael Jackson and the Billie Jean he sang about. "My mother always told me I was a surprise - not a mistake," is the clever lyrical hook to "Billie's Genes." As the Stax soul tribute takes shape, it is quite amusing to watch Dyan and Ian try to keep a straight face as they deliver their vocal punctuation "hoo hoo's". 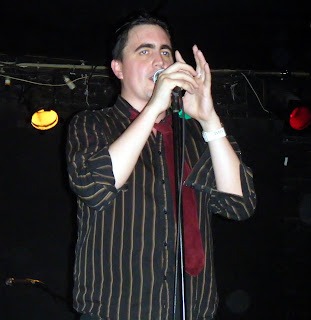 "Sometimes I'm not so wise, I make mistakes - ocassionally," Eddie confesses.
It's a far cry from Frank Sinatra's confident bravado.

See what I mean: 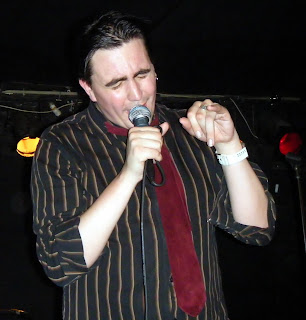 "Hey - it's Jimmy Mack - yeah, I've heard your track - if that's your attitude - I am never coming back!" Eddie exclaims. In an ineffable "response" to Martha Reeves classic song, the point is driven home that you should never play with a man's heart like this. 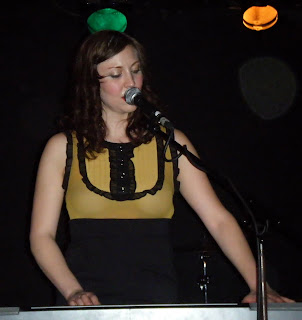 An accomplished musician and vocalist, Eddie informed me that Dyan not only wrote all the music for this collection of songs, but played most the instruments on their album as well (with the exception of guitar and drums). Of particular note are the horn parts written for Waldo P. Emerson Jones and the harpsichord part for "Think Twice (It's Not Alright)." 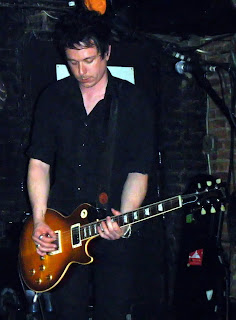 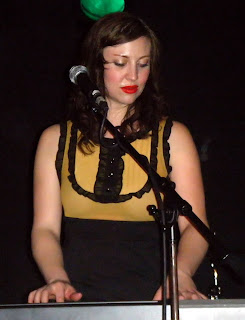 Dyan contemplates her next musical interlude


With the show now in high gear, Eddie informs the audience to be on the lookout for Avril Lavigne! "Normally she's at our gigs. I think she's in the crowd somewhere, so be careful, girls - she's after your men," Eddie warns. "But primarily, she's after me," he continues. "Hey Avril - I have a girlfren (and I spell it like Jonathan Richmond)" 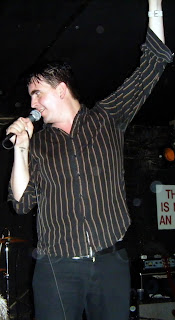 Not only does Avril steal boyfriends, but she's now been caught "misappropriating" large chunks of other people's songs. Here Eddie & Dyan set the record straight, with this delightful cover of the orginal song - by a band called The Rubinoos - their Power Pop song I Wanna Be Your Boyfriend - complete with a lively guitar solo from Ian. 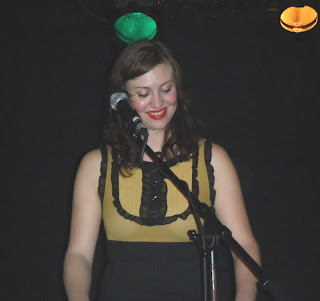 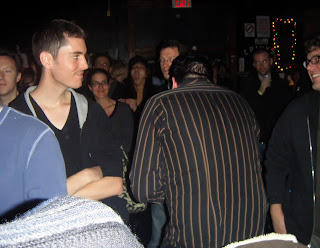 Not content to merely sing from the stage, Eddie waded out into the audience, bringing the music (and the live show experience) to a crowd-pleasing more personal level. 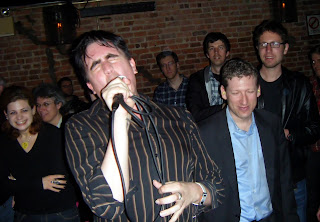 The Mercury Lounge attendees found it to be a most rewarding experience. 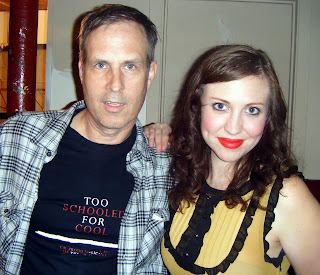 Meeting Dyan at the show!

Supporting on this night was a band called Murder Mystery 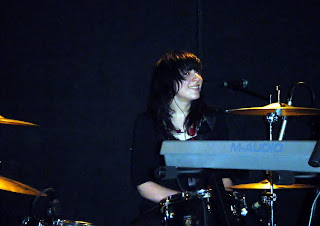 They were pretty good and I enjoyed what I heard on first listen. However, what I liked best about them was they appeared to have "the world's happiest drummer." This girl was what you would call "cute" (but not traditionally beautiful, in that glam-cheekbones and lips sort of way - like, say - Dyan is). However, while she was playing, she would break out in a ear-to-ear grin that showed someone who was truly enjoying what they were doing. 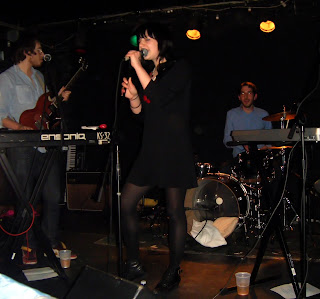 She also sang lead on a couple of songs - danced - and was quite charming in her casual, unpretentious innocense. It made for a most pleasant experience, while waiting for the headliners to come on.
To read, hear and learn more about Everybody Was In The French Resistance...Now! check out the links below:
http://www.cookingvinyl.com/

http://the-eddie-argos-resource.blogspot.com/
Join with them now - because the Resistance needs you!
Posted by DaveCromwell at 7:10 PM

I really enjoyed attending this bands live show. I hope I was able to capture and relay some of the atmosphere of these witty and creative performers.

Great job :)
Dave, you wondered if you were able to recall the gig's atmosphere. I think you you just did. Well- I wasn't there. But I smiled for a *lot* of times during reading this review so it's clear that you brought the good sense of humor of the band to these very words ;)

Their music is very enjoyable- Eddie seems to give up on sleeping and instead of wasting time he works hard on creating a lot of cool music. That's great. His girlfriend's got a wild musical imagination- one can hear that in their tracks. The atmosphere of these recordings reminds me of Cocorosie, but that's probably just me. Anyway- it's fresh, enjoyable and a kind of relief to the heart. Very good stuff!

Hey, eagle - glad you enjoyed the feature. Yeah, it seems like Eddie is always doing something creative. Not only with music, but reviewing the best comics out there, and he's a painter too.

I really like this collaboration with Dyan. Plus we have eventual new records from Art Brut and Dyan's band The Blood Arm down the road as well.

hate to say it, but now i've got this ear-to-ear grin on. nice work, Dave.

Perhaps I need to refer to you then, as "the world's happiest sound engineer and producer!"

another nice review, dave. had to devide the reading in to two parts, cause starts wasn't as fast as i expected, but the other half was quiet funny and enjoyable.
the band was quiet funny. a bit weird...
but i got the catch to those clues about the second band.... and now i want to know more about "world's happiest drummer"...
:)

Certainly there are unique and creative minds at work here.