Their stay here in the big apple was all too brief, but I was lucky enough to catch their debut live performance, in support of The Depreciation Guild's official album release party at The Knitting Factory in Brooklyn on May 25, 2010. 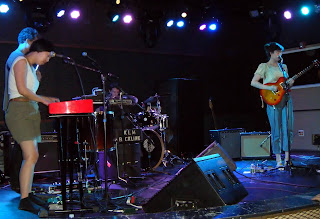 I was initially intrigued at the prospect of hearing this band when I read a press release stating that they were "able to craft seven minute experimental-rock epics." Those words alone was all it took to send me over to their MySpace page and give a listen. 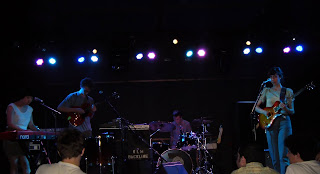 Instantly captivated by "Liver And Tan" - one of only two song samples on there - it provided enough motivation to check out their live show. As they are presently looking for the proper outlet help them release their music, most tracks cannot be showcased, however one hopes that will change soon.

I recommend you give this one a listen, though:

It captures the essense of what this band is all about. Delicate, undistorted guitar interplay, jazzy percussion, and soft, passionate female vocals, that occasionally overlap into cresendos. 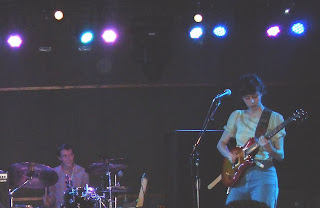 Although they are a solid four piece band displaying individual talents and contributions, the predominant focus ultimately falls on vocalist/guitarist Raphaelle Standell-Preston. Her voice is soft and appealing. Bringing to mind, at times (in tone and phrasing) Kim Deal (The Pixies and Breeders), Kim's onetime sidekick Tanya Donnelly (Throwing Muses, The Breeders and Belly) and Beril Gucieri of Pennsylvania's East Hundred (http://www.myspace.com/easthundred). 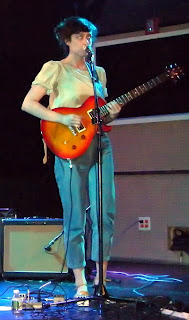 Overall the music and song structure is quirky and unpredictable. The vocals are built upon each other in layers of syncopation and counter melodies. Like some kind of ethereal gregorian chanting chorus. 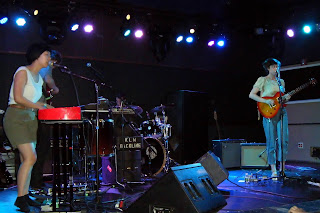 As keyboardist Katie Lee alternates between synth strings and piano textures, much emphasis shifts to the percussion. 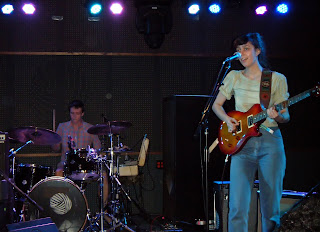 They brilliantly use effects pedals to create looping sounds, both on their instruments and vocals. What Robert Fripp initially innovated in the late 1970's now seems at the fingertips of bright young bands, who are both technically capable and sonically adventurous. 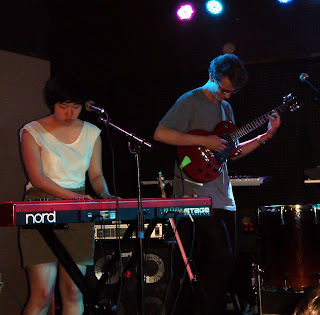 Taylor Smith is impressive as a constantly in motion multi-instrumentalist, alternating between bass, percussion and guitar. 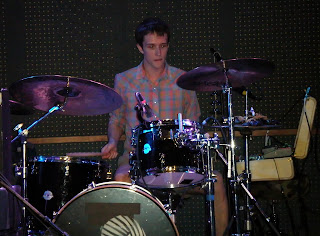 Drummer Austin Tufts exhibits a sophisticated understanding of his instrument, marking out patterns that are fluid and structured. 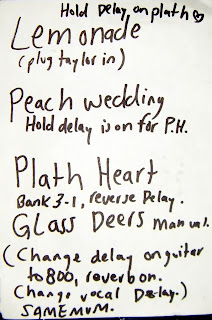 Following Braids was Brooklyn's Wild Nothing 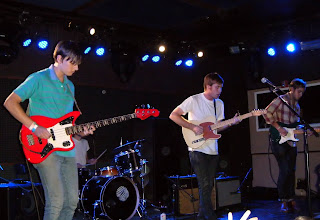 Coincidentally, they were also having their album release party. Many of their fans were in attendance and appeared to enjoy dancing to this bands modern Joy Division/New Order influenced sound.

Having written a number of times about The Depreciation Guild over the last year - and this being their album release party, I wanted to focus on the records deeper tracks. In an ambitious and bold move, the band chose to play the entire album through - front-to-back. The only time they would ever do this. So, having already reviewed most of the front half of the album (links to those at the end) it was the last four tracks I set my attention to. 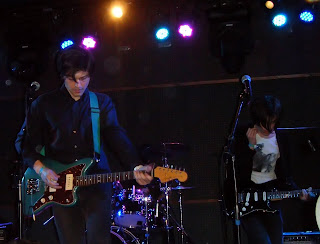 "A Key Turns" features more of that smooth vocal sound from frontman Kurt Feldman. There is a slight famicon undercurrent, but more prominent are Cocteau Twins-like shimmering guitars. Christoph Hochheim and Kurt create a perfect dreamworld in this regard. The word atmospheric gets thrown around a lot in reviews, but in this case it’s certainly deserved. 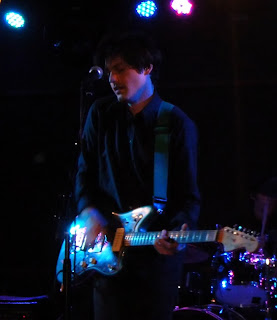 Lyrically, the sentiment is somwhat ambiguous, as Kurt sings "a key turns inside another past - uncovers the unclear. Ghost resin synapse fires fast, she knows she has been here". In its most literal interpretation, turning a key usually signals the opening of a door. Perhaps this is the intent.

Listen to "A Key Turns" here: 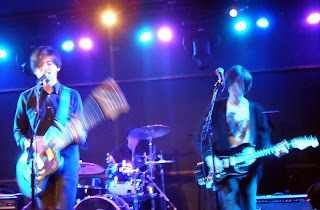 The albums title track "Spirit Youth" presents a mid-tempo stomper that drives off the back foot via Anton Hochheim's solid drumming. There are many wonderful guitar textures on top, though. One can (again) pick up on a subtle Cocteau Twins-like vibe, with long, extended and slightly abrasive guitar notes subverting the otherwise sweetness. 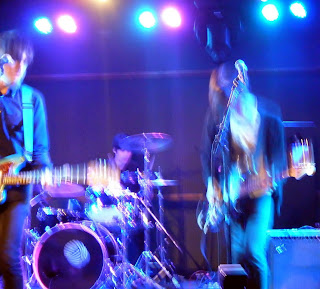 In a recent interview, Kurt told me that this song sprang from his going through his old tapes and reminiscing about the music he grew up with. "Still ringing in my ears, summarized on spools of tape," and "the spirit youth floats into space, it's making love with time."

Check out the bands spirited performance of the title track "Spirit Youth" here: 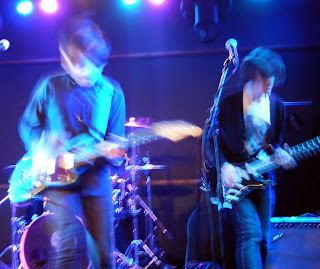 "Through the Snow" delivers a much quicker, forward driving motion. The heavy snare drum shot in double time sets the base for everything to float over top. There is even a near prog-rock style keyboard line in the chorus. Full guitar chords are strummed down like hammers, as the keyboards and bass develop the counter-rhythm. Our friend the Famicon lurks underneath as well. The song culminates with this great downward guitar chord break that underscores the thought and complexity in this bands songwriting. 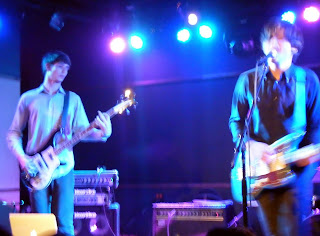 Playing as a trio (and before Anton joined as a duo) since their inception, it was a revealing surprise when the band introduced its newest member - bassist and keyboardist Raffi Radna. The band had to rely on some programmed bass and keys during their previous live performances, so this show in particular was groundbreaking and displayed a band progressively evolving.

Here is "Through the Snow" 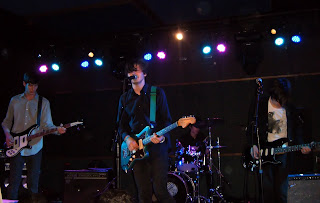 The final track on the album - "White Moth" is epic in it's construction. Clocking in at six minutes it's the type of song that truly illustrates what "deep tracks" are all about. Kurt uses the imagery of a moth he once sat and watched to convey feelings of moving in and out of the spotlight. "I think I could die by her tongue - and you, drawn to the fire. Why are you there on the ceiling, pushing the air through space? White moth you stole the show." 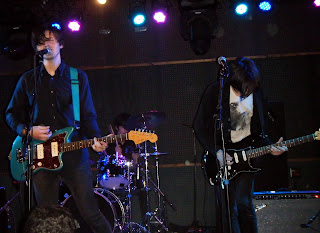 There is a sparse arpeggio guitar line that sets up the more powerful (and more dramatic) passages. Of particular note is the tasty singular guitar riff played by Kurt that ties each segment together. 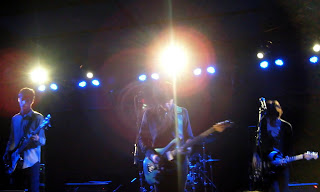 The epic performance of "White Moth" can be found here:
http://www.youtube.com/watch?v=M4Fp8TS0PS8 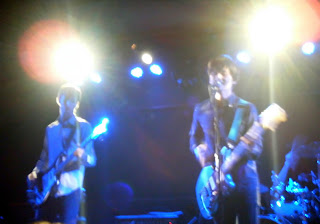 Lights blaze as albums are played in their entirety 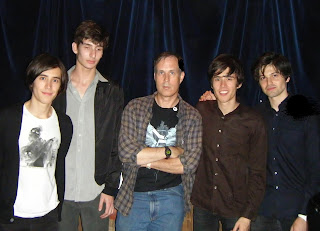 This sounds like an interesting collective, and one that probably deserves more than a cursory listen. I'm liking th vocals already. Good work DC.

Vonpip - yes, I think you'll find on closer listen that there is plenty of creative detail to wrap one's mind around.

One of my fave quotes of all is this:

Fantastic job, once again. I've already commented on the Depreciation Guild's music so today I would like to write a few words about Braids, which is the new stuff on your blog.

The idea of young rock/shoegaze bands recording long compositions instead of those classic two/three minute songs was wandering through my mind for some time now and it was initiated by Stellarium's recordings. I mean- time is a friend of the music. Within seven or ten minutes the band is able to fully express themselves. Just look at the "Stairway to Heaven"!
I'm not saying that Braids are already as great as Led Zep but if they follow this path of long, creative and atmospheric compositions they may end up somewhere around the great names of rock. Their sound is really something- a strange merge of "delicate" shoegaze, 70's psychedelic rock and something totally unusual, their own ingredient.

It's really a pleasure listening to them and actually seeing the videos and photographs from the show (the same goes for the Guild).

I hope that you'll write more about the Braids sometime soon ;)

It's interesting to see the thoughts and comparisons you come up with after reading and listening to the above, eagle.

It's true that a bands "own ingredient" is the essential element in making you want to check their music out.

well, it seems, like dave has jumped in to another music train again.
well the first band seemed colorful as i was reading and it was when i hit the link that was given. all i missed on that band was electric guitar - more of that. they are some sort of experimental or psychedelic and i am not very in to that kind of music
now the different thing was the second band. i got to admit i was more interested in them when i was reading then the first one. when i checked them out - i like them. and i see the old good tradition - dave and the band in picture has been continued. ;)

Mr. Smork - as the great Robert Smith of the Cure once sang - "I'm always jumping somebody else's train" ;-)

But seriously - glad you could dig the tunes.

I'm sure the bands appreciate knowing that as well.