Live Music Parties For The Holidays

As the Holiday Party season rolled on here in the month of December, three more noteworthy shows were attended on consecutive nights.

First up was the Wired Magazine event at their flagship store in the West Village, featuring a performance from one of this years breakout bands Cymbals Eat Guitars 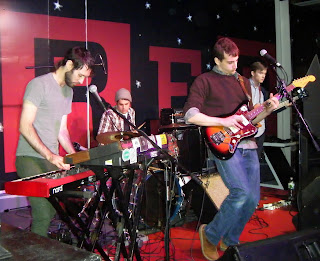 I had been enjoying their debut album "Why There Are Mountains" ever since the good folks at TellAllYourFriendsPR brought it to my attention. 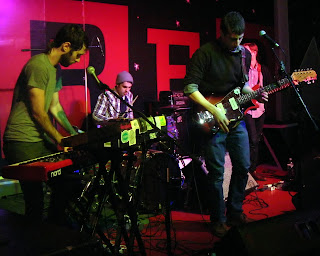 Having caught the bands live show at Webster Hall back on October 3rd, when they toured with The Depreciation Guild and The Pains of Being Pure at Heart, getting to see them again in this unique setting was something of a treat. 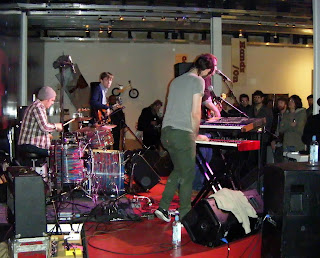 The Wired Magazine store is an exceptionally hip-yet-nerd-cool environment to hang and see a band in. Netbooks, toasters, shoes, phones, bicycles, high def televisions and all the latest techie-type gadgets are at your disposal. Plus, on this particular night, an open bar and all the energy drinks you could handle. 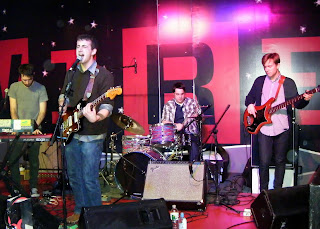 As for the CEG boys, their performance seemed a bit more relaxed and less rushed than their opening slot at Webster Hall two and a half months earlier.

Have a listen here and you'll see what I mean: 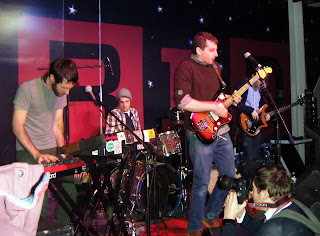 They played a spirited set, incorporating at times, frantic guitar strumming, impassioned vocals, a variey of blended keyboards - moving from quiet passages to all out blustery jams - all within the same song. 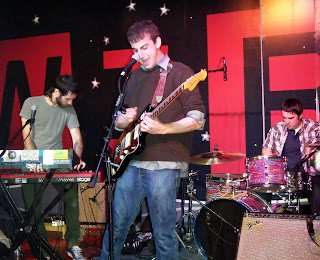 I'm impressed with the way CEG have no apparent inhibitions about incorporating alternately noisy and/or atmospheric passages within their mostly traditional song structures.

It's a sound I've become rather fond of. 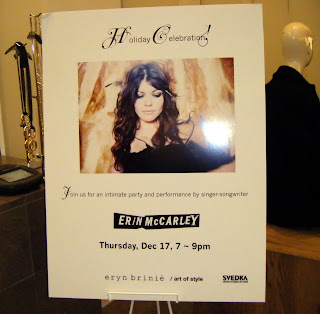 Erin McCarley has an instantly likeable, easy going way about her - and I can't attribute that entirely to her striking good looks. 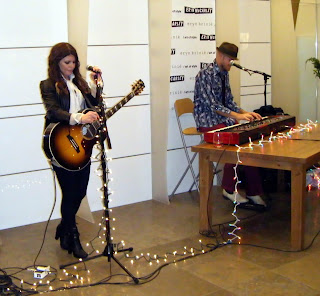 Her voice is note perfect, the songwriting meticulously constructed and the passionate delivery immediately intoxicating. 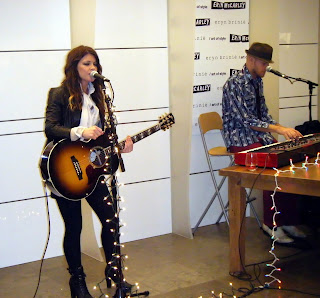 Erin was accompanied by a keyboardist/backing vocalist named K.S. Rhoads, who provided just the right amount of support for her. 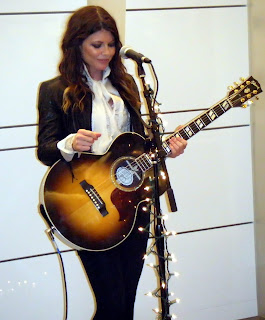 Listen here to her performance of "Sticky-Sweet" 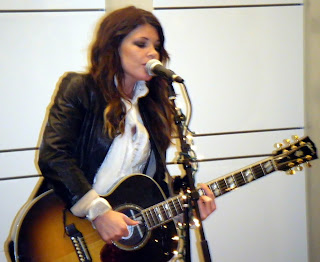 Listen to her performance of "Blue Suitcase"
http://www.youtube.com/watch?v=K__A_g2JIvs 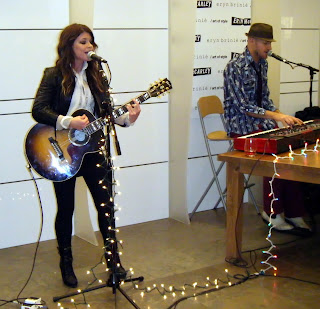 Erin's voice alternates between pure and sweet and a slightly more "smoky" rasp. The song "Blue Suitcase" has a particularly hooky chorus that sticks in your head all day long. 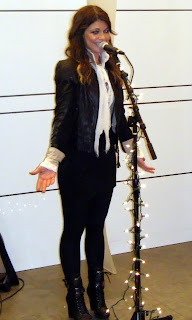 It's hard to say what is Erin McCarley's most outstanding feature. A wonderfully melodic voice, finely crafted songwriting and striking good looks all seem to compete for the honors. One is tempted to say that she is the total package here.
Listen as she performs her song "Pitter Pat"

http://www.youtube.com/watch?v=4cAO8jAERfY
Haunted by angels on her shoulder. 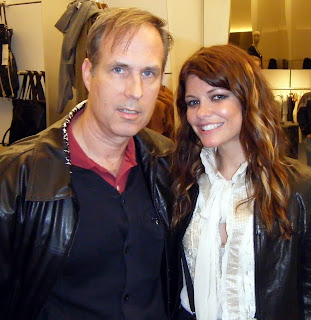 Yours truly - with the artist
For further reference:
http://www.myspace.com/erinmccarley

-------------------
The next night is was out-on-the-town again for even more holiday shows.
This time experiencing the full band electric show of Celia Chavez at Rockwood Music Hall. 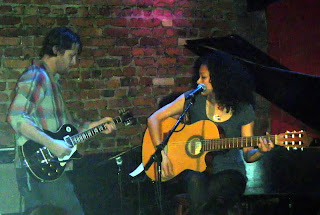 Celia - a native New Yorker who now resides in California - had been performing almost nightly since touching down on the east coast the previous week. 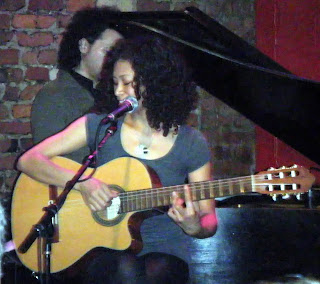 Having already experienced her acoustic show on her first night in town, I was eager to hear how it all sounded within a full band setting. 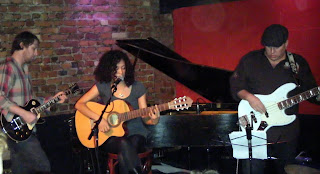 The band accompanying her was Steven Elliot on guitar, Chris Parks on bass, Daniel Mintseris on keyboards, J. Walter Hawkes on Trombone and Sterling Campbell on drums. All quite accomplished professionals who enhanced Celia's song structures perfectly. 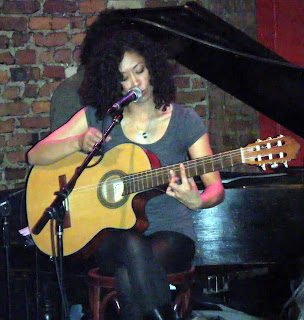 As for Celia herself, she has the most amazing vocal quality. Her style is light and breezy, yet there is a serious depth to her nuanced phrasing.
Listen in to the opening song of the performance:
http://www.youtube.com/watch?v=80EKuhZimKA 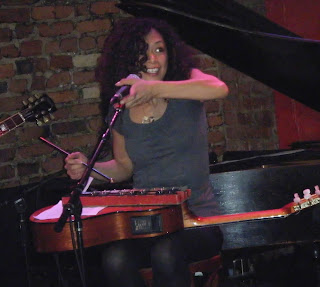 Celia presents a playful stage presence as well. For one song, she played a toy xylophone, which served the dual purpose of echoing the melody line, while keeping everyone delightfully entertained. 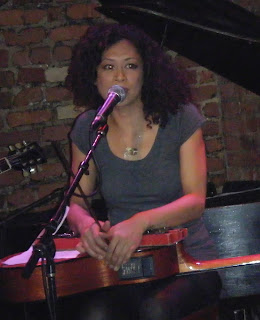 When she is singing, however, there is no mistaking the fact that a serious artist is at work here. 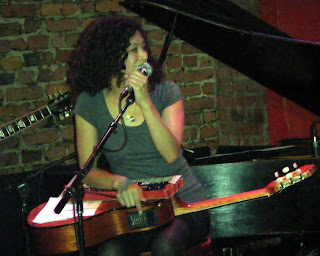 The Rockwood has to be one of the most intimate, high-quality sounding clubs in all of New York. Celia and her band took full advantage of the vibe and delivered an outstanding show. 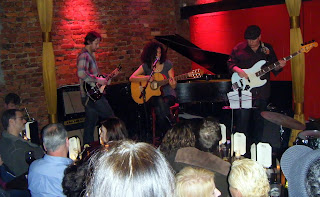 Listen once more, as Celia plays her own composition "Going To California", which she amusingly prefaced as "not the Led Zepplin song." Though I'm sure she could have done that version justice as well.
http://www.youtube.com/watch?v=rfagmenZCEw
___
Wonderful.
Find out more about Celia Chavez here:


http://www.celiachavez.net/
With Celia's set over, we hung around and chatted a bit - Robin, Neil, Anne and I engaging various band members in chats - while we waited for the next performer, a most entertaining fellow named Ethan Lipton to come on.

Mr. Lipton's show is something to be experienced - at least once. The songs are lyrically hilarious - and the music is a high quality jazz presentation.

You can year exactly what Ethan does right here:
http://www.myspace.com/ethanlipton

Not quite ready to end the night's festivities, Anne and I decided to head on over to Don Hills club on the west side of Manhattan for the Friday night Mondo Dance Party
They had a live band performing there as well. 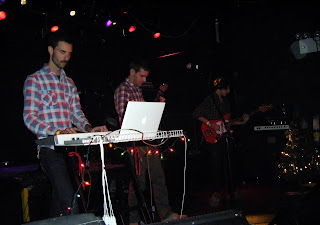 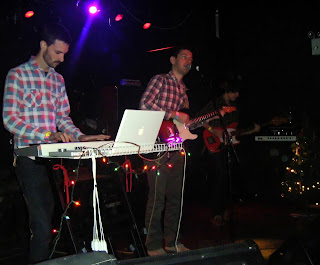 Who knew checkered shirts could be so - stylish?
Somewhere in the twilight am hours, Anne and I decided to pack it in.
In the subway station, we stopped to ponder the artwork of Tom Otterness. 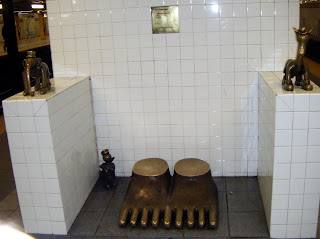 A surreal moment for sure - but then again - it was the Holiday Fun Season in New York City, so ultimately it made perfect sense.
Posted by DaveCromwell at 5:52 PM

"It's hard to say what is Erin McCarley's most outstanding feature."

I like her voice...very engaging Another interesting selection from DC!

I see it was hell of a month when it comes to the gigs. And hell of a review it is. Great job.

I've just given each one of those bands a listen and I have to say that Cymbals Eat Guitars are my favourite from this breathtaking pack. Their music is very cinematic- it may not be a wild, emotional rollercoaster 'cause it's very much at ease, relaxed sound, but it produces very strong atmosphere. It brings pictures to mind, it's very juicy I would say.

Anyway, a really cool reviews. It's nice to see it all 'cause when someone's not there, here is the best source to the New York music scene.

Ah, Mr. VP - Why am I not surprised you noticed the obvious talents of Ms. McCarley? Perhaps we'll see a feature on her in the VPME sometime down the road.

Radek - glad to hear you appreciate the (as you accurately say) "cinematic" style of CEG. Good stuff.

OK, here are some thoughts:
I’m thinking that guitars, if they are to be consumed through the alimentary canal, are more of an entrée than an appetizer, but perhaps it would be best to ask Animal of the Muppet Show to share his thoughts on the matter. Or, should I say, platter? I am also contemplating the failure of all my years of education when confronted by such Cromwellian phrases as “hip-yet-nerd-cool,” which both vexes and perplexes. I cannot find such lingo in the urban dictionary, let alone Webster’s. I ask myself, “Self, when did nerds become cool, and why wasn’t I given the memo?"
Moving on, Dave wasn’t kidding when he noted that Cymbals Eat Guitars was playing a relaxed set. It was so relaxed that I recommend a special commendation to their singer/guitarist for maintaining a delicately intricate strumming pattern while fighting off one heck of a yawn from 1:22 to 1:39 of the first featured video of the blog. I know some will argue that it’s just “one of those faces that musicians make,” to which I would rejoin, “No, look directly at 1:39—the moment in which he conquers his yawn… See?” I must admit I was infected by his yawn, as I could not help but so indulge. Not that there’s anything wrong with yawning—be proud of your yawn, I say! But I note that the timing was most fortuitous, as it manifested in the absence of a vocal moment.
Next up, I think that Rhoads is an apt name for a keyboardist, and K.S. (which one can only hope does not stand for Kaposi’s Sarcoma) is quite the workman for the lady he supports, Erin McCarley. Of the three tunes displayed here, I fancy “Pitter Pat” the most. Oh, and Dave, you’re looking mighty handsome there in that photo with Erin.
Lastly, who is playing harmonica in the Hello Sunshine video of Celia Chavez? If that’s a keyboard, wow! That’s a pretty darn good harmonica sound. Even though Rockwood Music Hall is an intimate setting in the way that a can is an intimate hangout for sardines, I’m bummed I missed that one.

VFSD - some most entertaining and interesting commentary there. In addition to your thought provoking analysis of CEG's set - to answer you question about "when did Nerds become cool" - I believe it was around the time Bill Gates took over the world ;-)

Anyway, I'm glad you can appreciate the music of all the artists profiled here.

ok, i won't go that deep and loong in to it as WFSDH, but i have some thoughts i will share;
it is good that you have chances to visit so many quality shows on this time. (i'm so jealous - have to work hard these days and it seems that i have no perspectives as i was hoping...)
i quiet like the first band, i think their studio work should be a great thing to listen to. as for nerds discussion - for me nerds became cool as i found band called "the weezer". :)
i have to point this out: that chick erin mc.... - looks hot (sorry for my expression) she might be my new babe - crush from now on. :)))) oh, wright... her music... it sounds nice i would like to listen that kind of music when i am traveling, just make me day dreaming... :) oh and her keyboard player wore a porkpie hat! ;)
as for cecilia i have heard her before by watching some foreign tv that i think was translated to german language... as for her music to say if i like her or not i should hear more from her, but i am not that interested in to her as i am about first two performers. :)
dj thing.... i don't really like dj thinging... so i'd better hold my comments about them for myself. ;)
so this is it about the music and writing was quiet entertaining.
feel the free everybody. :)

Good points, Mr. Smork! Yeah, the CEG album sounds great. Seek it out, you won't be disappointed. I also like your point of reference regarding your "nerds can be cool" discovery ;-)

Additionally, I'm sure Erin and her keyboard player would be pleased by your approval as well.