As part of the annual CMJ (College Music Journal) Music Fest in held New York City each October - Los Angeles based band Gliss presented their Rykodisc/Cordless music showcase at The Delancey on the lower east side of Manhattan on the 24th of that month in this year 2008.

I had become a fan of Gliss when I first saw them in support of The Raveonettes just over a year ago, in early October 2007. Seeing them play twice over a three night span at that time solidified my interest in their music. Picking up their debut album "Love The Virgins" at that time, its been in semi-regular rotation on my playlists for the better part of the year. 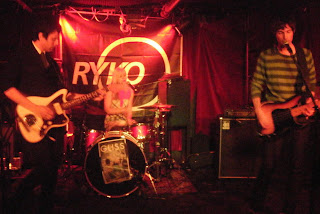 The band has been working hard on their follow-up album, to be titled "Devotion Implosion".

At this label showcase, their set consisted almost entirely of these new songs from the forthcoming album. 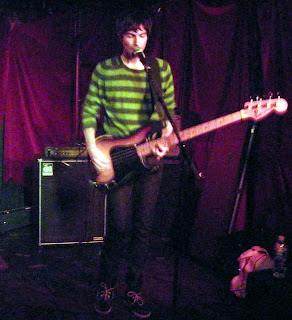 Gliss are a unique trio, in that all three members trade off on their three respective instruments. When they began playing, the set up had Martin Klingman on bass, David Reiss on guitar and Victoria Cecilia on drums. This was the same initial formation they came out to a year ago. 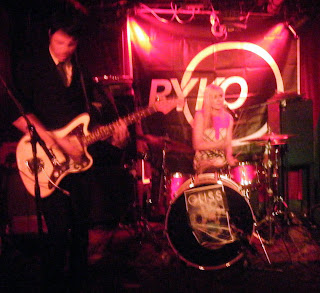 David Reiss is a particularly expressive guitarist, while Victoria's drumming has a strong, rudimentary power that belies her delicate exterior. On the new songs they debuted, David made wondeful use of a reverberated guitar sound. He is a dynamic, animated and exciting guitarist to watch in the live setting. 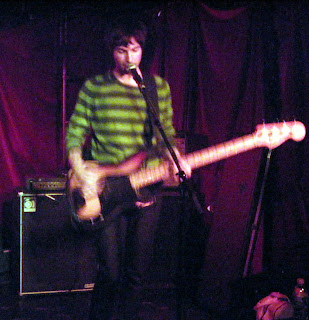 Despite the instrument changes, the band is essentially fronted by lead vocalist/lyricist Martin Klingman. While all three members share credit in writing all the music, the lyrics are solely the product of Martin's creative process. 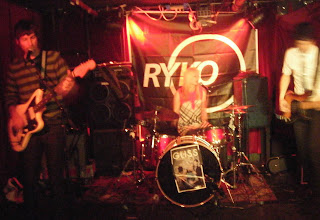 The first instrument exchange had Martin and David swapping guitar and bass. Victoria's background vocals - which blend seamlessly with Martin's lead vox, provided an additional layer of richness to the sound. 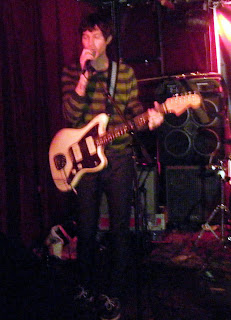 Martin sings with a smooth, easy style - where he draws out the words. Its laid back, but dramatic at the same time. The music is spacious when he sings, leaving room for the words to resonate. On one of the new songs, David plays guitar lines that sound like something The Cure would play. In fact, the white guitar he plays looks identical to the one Robert Smith has been using for years. Then he goes off in a full reverberated guitar exploration - like some kind of Dick Dale surf athem - with Victoria sloshing out a high-hat heavy and cymbals drum pattern - while Martin sings and plays bass. Both Martin and Victoria sing in unison some lyrics that sound to me like "Love is only bad luck, think about for-ever - for - ever." Then it sounds like "Love is in the Bedrock". Its a great song, and I can't wait to hear the recorded version. 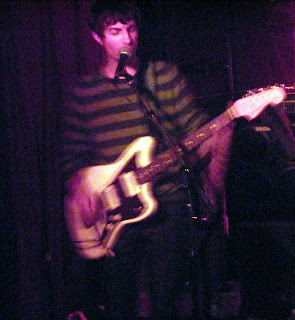 Another new one had Martin singing is a falsetto voice, as the band laid down a slow, heavy, lumbering groove - combined with delicate layers of lightness - only to morph into the heavy once more. On the instrumental passages, David makes creative use of his whammy bar and rapid-fire strumming. The druming of Victoria and bass of Martin keep the groove rooted down. "Soon, sleep" they sing. 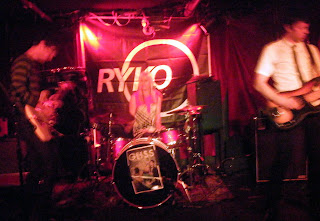 With Martin now on guitar, the dynamic changed once more. 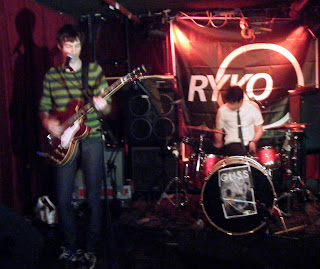 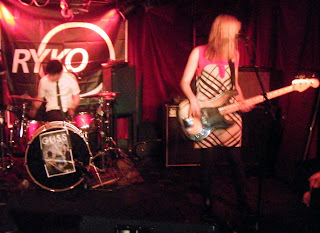 Once the band switched to the configuration with David on drums and Victoria on bass, the intensity level really heated up. Victoria is clearly the most expressive and sophisticated bassist of them all - her slithery bass lines and precision punch give the band an added dimension. Martin switched to a semi-hollow body guitar for a new song where he repeated the lyric "is anybody inside" 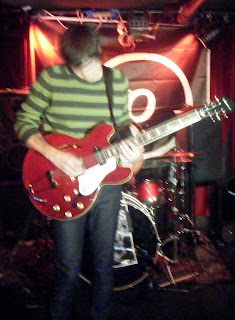 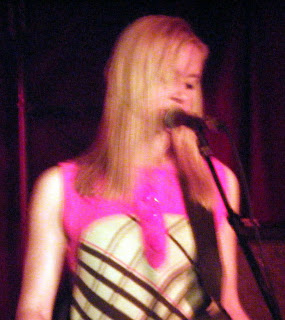 Victoria has a style and presence similar to what original Smashing Pumpkins bassist D'Arcy brought to that band. However, Victoria is clearly a much more evolved musician. 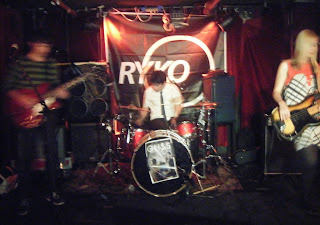 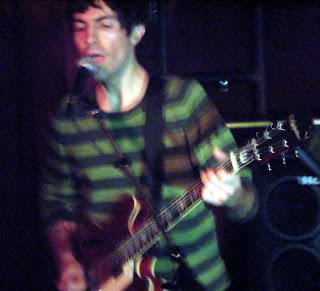 David then took the guitar back and Martin headed over to the drum set. However, as the lead vocalist, he quickly took to driving the band from the center position, as David hunched over his guitar with tremolo-effects creating a tripped-out mood. Victoria's bass continued to slither and glide throughout. With Martin and Victoria laying down a dark and heavy groove, "Love is always, hiding, hiding" appeared to be the lyrics being sung. Martin again alternated between a higher falsetto voice and his more recognizable mid-range.
Among all of these new songs, they did play one or two from their first album. Check out their performance on the catchy, hooky "Gimme The Hit"


After their set, I caught up with Victoria and Martin for an outside-the-venue, get-some-fresh air interview chat. 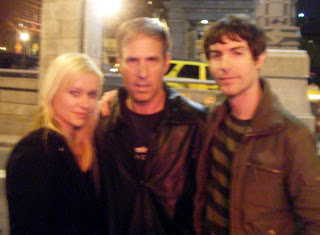 With the Williamsburgh Bridge behind us for dramatic effect, and my trusty interview assistant Steve handling the camera duties, I questioned them on a variety of topics. Steve chipped in with some commentary as well.
In the first part of the interview, I asked them both about Martin's unique vocal inflection style; their songwriting process; the release of the upcoming album; Martin's new haircut; and Victoria's more glamorous rock profile.
Give a listen to this interview segment here:
http://www.youtube.com/watch?v=4eqZXotNCx0

In the second part of our interview, we were joined by the band's manager Ray Cooper and their A&R rep Ruby. Both turned out to be friendly, chatty people who added significantly to the interview. 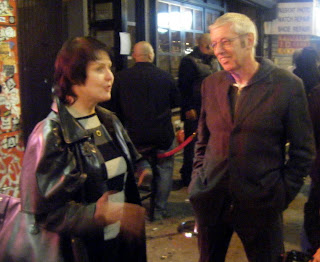 Listen to that segment here:
http://www.youtube.com/watch?v=db7_1etiapY 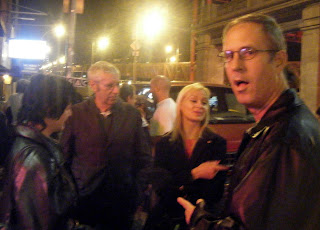 Thought it appears Victoria and I are engaging in bit of finger pointing - there were no actual accusations, and nothing but good vibes all around.

Significant links to find out more about Gliss:
http://www.myspace.com/gliss
http://www.gliss.tv/
Their latest album - "Devotion Implosion" is scheduled to be released this coming spring.
I can't wait to get my hands on it.
Posted by DaveCromwell at 5:09 PM

Yet another Gliss show. Fantastic stuff, like I said before, their sound is a little 'sleepy' but really okay. Good job.