Steve Shiffman & the Land Of No - live at The Cake Shop

On Friday night, the 12th of September 2008 - I decided to ramble on down to The Cake Shop to check out a show from local NYC band Steve Shiffman & the Land Of No.

I had gotten to know of Steve and his band of "No-ness" through my being a fan of Nicole Atkins & The Sea. Guitarist dAve Hollinghurst is a member of both groups, and although his duties with The Sea may garner him a bit more attention, I suspect he has nearly as much fun playing with the Land of No. 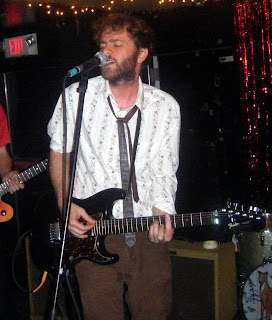 Steve Shiffman, in all his bearded and stringy tie glory

I first caught Steve (with dAve) and the band's act when they were doing their residency at Pete's Candy Store in Brooklyn way back in January of this year.

Here's a clip from that night:


ON this night, however, the venue was that bastion of cheap low lighting and a stage just big enough to fit a 5 piece band (and essentially nothing else) The Cake Shop.

Now, don't get me wrong - I always have had the best times whenever I've gone to see a show there. However, at the same time - and purely from a showcase and staging point of view - I wouldn't put it on the same level as The Mercury Lounge or even Don Hill's - which have far better stages, lighting and sound. 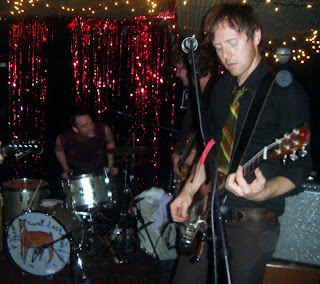 
After a night of false starts for me - and driving around a while to find a parking spot in the usually reliable lower-eastside area that is the home of so many of these clubs - I arrived just in time - literally minutes before the band was to go on. 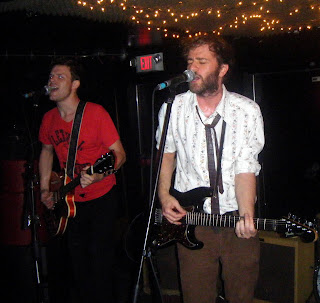 
The place was pretty full already, but I was able to snake my way up to the front. The rabid, die-hard Steve Shiffman & The Land of No fans were already in place, pumped and ready to rawk out!


Steve and the boys did not disappoint as they ripped through a well rehearsed set of 11 hooky tunes .

Give a listen to their tune "Jet Lag" here:

The spirit of "hot rod Lincoln" lives in that one. 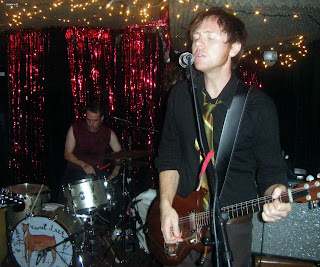 Pete and dAve - doing what they do best
providing shuffling rhythms and bending notes
To me though, this band has that loose-good-timey feel that The Replacements were so well known for. On the surface its pure "garage band", but if you listen closer and dig a bit deeper, you'll see there is a wit and intelligence behind it all. Add the six string mastery of a dAve Hollinghurst - who lifts it all out of the "garage" and takes it to an entirely other level - and you have a truly enjoyable listening experience. 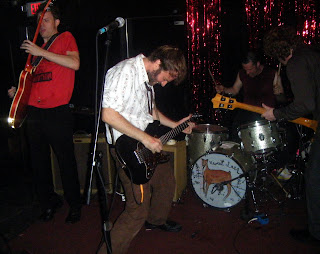 The band furiously "getting down"


Steve and his band also (sometimes) bring to mind another "Steve" who's music I'm fond of - that being Stephen Malkmus & The Jicks, whom I've already written extensively on in this here blogosphere of mine. 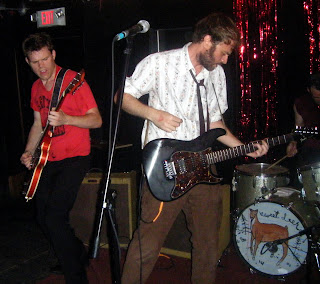 Alec and Pete slash chords with a serious intensity

There are also elements (at times) that feel like the groove and pacing of PJ Harvey and her band, when they first hit the scene. 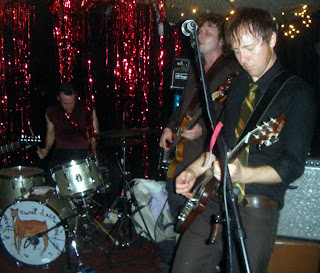 Check out this clip of their song "Tweed Skirt" 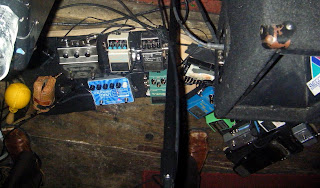 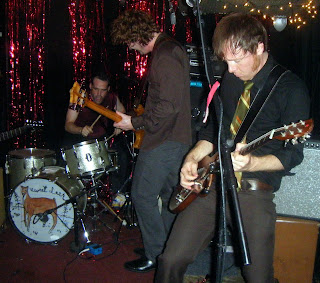 Bassist Ken Heine took the "Bill Wyman award" for stay-in-the-shadows-be-heard-but-not-be-seen activites - however his playing was crucial to the overall sound and proved to be as solid as they come.
One more clip - here drummer Pete Hayes takes the lead vocals - and Lord Hollinghurst plays the most amazing, chill-enducing extended-hook/solo.
http://www.youtube.com/watch?v=Z7HNGtbfBAM 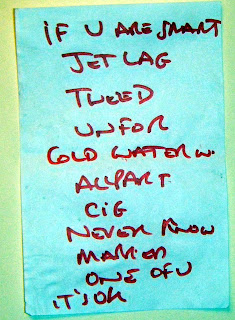 
As I have mentioned previously, this lower-eastside are of NYC is my fave area to check out shows. For starters, the close proximity to the Williamsburg bridge makes it easy access to drive in and park on the street nearby. Plus, there are just so many of the clubs and venues, all packed into one area. Just off the top of my head - The Mercury Lounge, The Bowery Ballroom, The Annex, The Delancey, The Cake Shop, Arlene's Grocery, Pianos - all within easy walking distance of each other.

Adding to this nights already crowded streets from all the activity happening everywhere - there was a film crew set up on Ludlow Street, right outside of The Cake Shop. It was soon discovered that they were filming scenes for the hit TV series Gossip Girl. 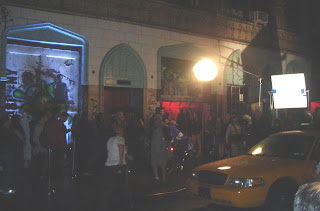 Check out this clip I took:

Posted by DaveCromwell at 6:47 PM

Thanks for coming to the show Dave, and yr support of Steve Shiffman and the Land of No. See you next time, wherever that and the "vertical color of sound" may be. Rock.

Yet another show of this band. Great job on the review- but that's exactly what I expected from you, dave.