On Friday the 29th of August, The Secret History played live at The Mercury Lounge in New York city. This was my third time seeing them play, and they yet-again put on an outstanding show. With each successive show, the confidence level, overall tightness and easy interaction between the vocalists and musicians is clearly on display. 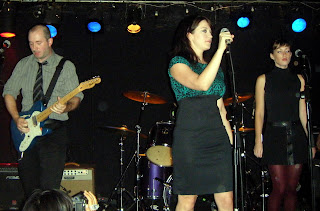 Having gotten to know a few bandmembers somewhat over the three months since the first time I saw them, it was great to be able to chat with them prior to the start of their show. It gave me great insight into how each of them approached their impending performance. Bandleader Michael Grace was cool, calm and collected. Having been through the "rock scene" so many times before already (with his previous band My Favorite), he was chatty, but showed no signs of pre-show nerves. Lead vocalist Lisa Ronson was another story, however. 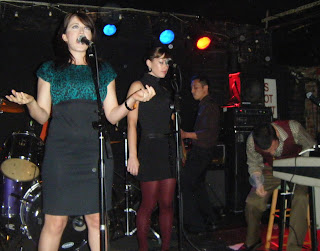 Lisa, with her outstretched palms appear to offering the audience a hug.
Erin focuses while bassist Gil Abad applies "Derek Smalls" techinques.
Michael appears to have lost something under his keyboard.

Lisa had that happy, nervous chatter going on - occasionally simply grinning through closed teeth (and in fact, told me she is always a bit nervous before playing). 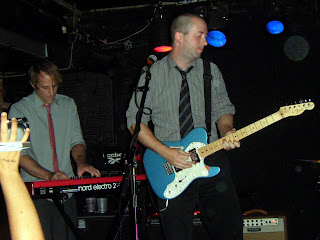 Add to the fact that many in Lisa's extended family had come down to see her -for one her mother (wife of legendary rock guitarist Mick Ronson), who was a lovely woman. Chatted with her a bit pre and post show. There was rock journalist and family friend Madeline - who was full of great stories. But the stunner for me was to see the living legend himself - Ian Hunter of Mott The Hoople fame (as well as many years and albums in collaboration with Mick Ronson, and solo too) come strolling up to Lisa and say hello. Lisa was kind enough to introduce him to me, and once I stopped staring in disbelief, I mumbled something about being a "big fan" of his. Also in attendance was Ian's son Jesse - who had a band of his own called The Audio Cartel. He was a fun and energetic guy to talk to and you can give his music a listen here:
http://www.myspace.com/theaudiocartel 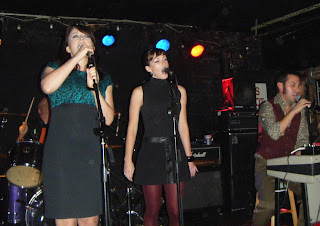 Showtime was soon upon us, and as the lights dimmed, The Secret History took the stage.

Check out this video from that night's performance: 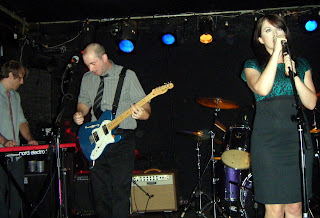 "Please don't take my nightmare away" 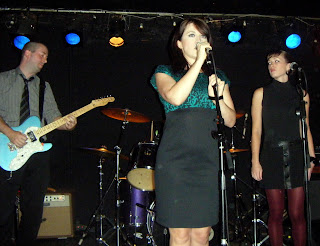 The band then played one their three "signature" songs (well, one of the three slickly produced songs featured on their MySpace music page) - "Our Lady of Pompeii". It truly is a clever, multi-faceted piece of music. Both in its sound design and lyrics. Intstrumentally, the intro cleverly teases the listener with what appears to be the strains of Gary Glitter's anthem "Rock & Roll" (hey!) but then quickly switches gears as Lisa begins to sing . . . "the sh*t hits the town, when the Chrysler plant shuts down. I signed on as a soldier, 'cause nobody gets older in that Never land. I tried to find a sign - of my captains grand design. I soon would be learning that every bush was burning in that heathen sand. But our Lady of Pompeii - you are - pretty and grey - your arms are closed - but what were you going to say - before?"

Here it all rises to the most infectious and catchy hook - whereby guitarist Darren Amadio plays a dominant melody line in tandem with both female vocalists doing "oooh, oooh, oooh's" as they get to the big Chorus that goes "Everybody fights a war. Everybody fights the war - but you."

Some great honkey-tonk piano follows. The interplay between the musicians is sophisticated but never over-the-top busy. Organ stabs fills spaces perfectly. While Gil Abad's bass and Tod Karasik's drums power things along (as they are known to do), the interplay between the guitar and two keyboardists all find their proper place.

Lisa sings out "but ditches - are full of witches - but a saint dies with her - boots - on."

Intro reprised, pulling it all together. True song craftsmanship. 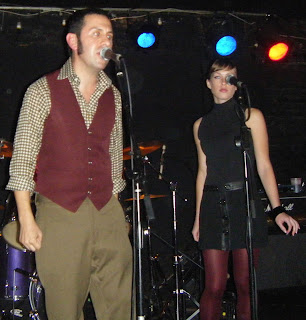 Anyone in the audience not already a fan, now fully won over, Michael then steps out from behind is keyboards to take a turn at the lead microphone. 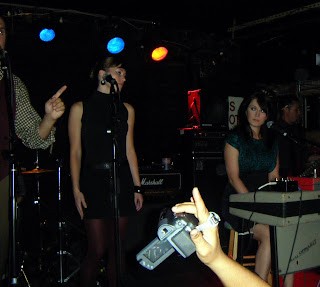 Lisa takes this opportunity to have a seat mid-set. However (at least from this picture) there appeared to be a bit of finger pointing going on. 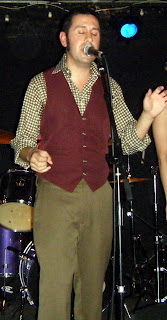 Michael entertains the crowd with his understated, witty banter. He then sings - and dances. Oh, how he dances! 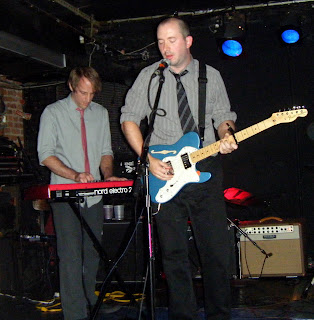 Besides playing great guitar, Darren also contributes regularly to the rich collection of voices via his backround vocals. And although keyboardist Kurt Brondo has no mic in front of him - his outstanding electric piano playing speaks volumes. 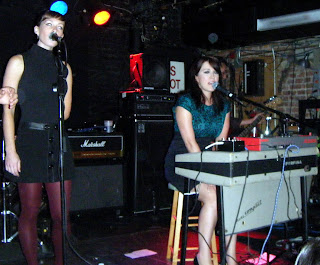 These are the voices we've come to know and love. 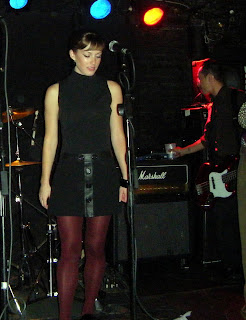 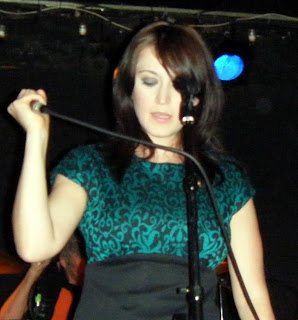 On this night, Lisa and the band played a gorgeous song titled "Sex with Ghosts" that really has to be heard to do it justice. How it all fits in with Michael Grace's vision of haunted hearts and the ghosts that inhabit this world. 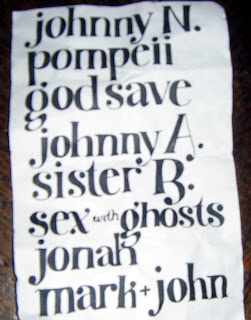 As I had mentioned earlier, the ultimate piano playing frontman of one of the greatest rock & roll bands of my tender, formative years (of course I mean the amazing Mott The Hoople) - Ian Hunter was in the house.
I could not pass up an opening to garner a picture with the legend. 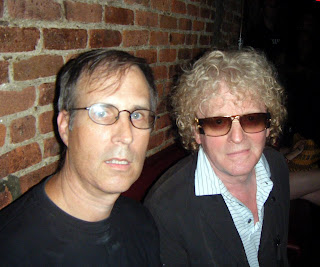 "Allo, allo, allo"
n you look like a star but you're really out on parole

The perfect ending to a great night of music.

To hear more of The Secret History's music, go here:
http://www.myspace.com/friendsofthesecrethistory
The band is now beginning the process of recording their debut full-length album.
I certainly look forward to getting my hands (and ears) on a copy of that.
A week later, I found myself down at the best indie dance party in New York City - Club Mondo.
Member of The Secret History were there too. Why? Because they like to hang out and have fun! In particular I had a blast dancing in typically unpaired group-style with Lisa, Michael, his pretty girlfriend Laura, superbad bassist Gil, various members of the Mondo DJ staff (and their girlfriends) - and probably a half a dozen other people I didn't know at all.
But that's how that is. It's just crazy, loose fun. There's just not enough of that in this life. In particular the songs I had the most fun dancing to were "The Only One" by The Charlatans, "Cannonball" by The Breeders, "Time To Pretend" by MGMT and most especially "Young Folks" by Peter, Bjorn & John (or PB&J - because who doesn't like a pb&j?!). Yeah - because we don't care about the young folks - and we don't care about the old folks too.
Go to Mondo if you love indie rock to classic post-punk, twee, shoegaze, weird pop and everything in between - and hop around liked a crazed fool. It's good for your soul.
http://www.myspace.com/mondonyc

Posted by DaveCromwell at 5:47 PM

Beautiful music and BEAUTIFUL girls. Sorry to stay so focus on the female aspects of the music but I can hardly think in other terms ;)
Great, great review.