A musical collaboration between Brandon of The Crocodiles and Dee Dee Dum Dum Girl has given birth to an art project they are calling Haunted Hearts. Having recently released their first full-length album “Initiation” on Zoo Music, a video for the song “Up Is Up (But So Is Down)” provides playful gender-bending visual imagery to this overall concept. 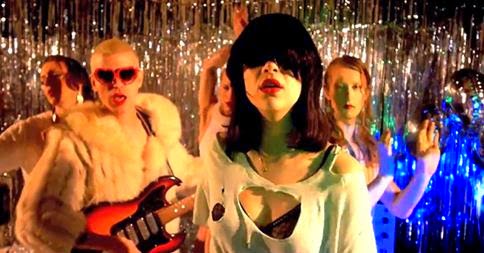 Presented like a psychedelic dream, boys in lipstick and other garments typically associated with the feminine side lip-sync much of the track. Credited as a dance performance collective called Chez Deep, they are joined by Brandon and Dee Dee in further glam trash attire. The track itself benefits from a dominant bass guitar line, fuzzed-out guitars and brassy synths, as the in-tandem vocals meld Brandon’s tenor with Dee Dee’s vibrato. The feel is similar to something Love and Rockets circa their mid-90’s “Lift” period would have produced.


The album was recorded by Jon Greene at Electric Orange Studios in San Diego, mixed by Jorge Elbrecht (Ariel Pink/Violens) at Static Recording in Brooklyn, and mastered by Joe La Porta at Sterling Sound in New York City. 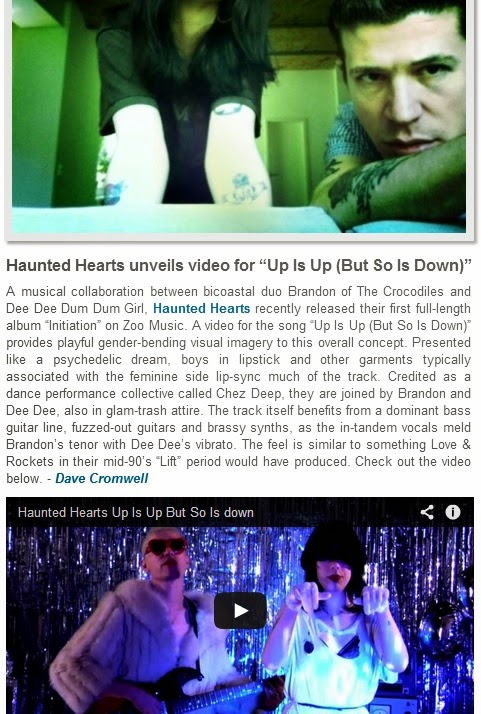 Haunted Hearts on The Deli by Dave Cromwell

For the fourth time in as many years, lower Manhattan’s South Street Seaport will host the day long free entry 4Knots music festival. Happening on Saturday July 12 from 1-8 pm, the event is rain or shine, and as in previous years bands will perform on two alternating stages. 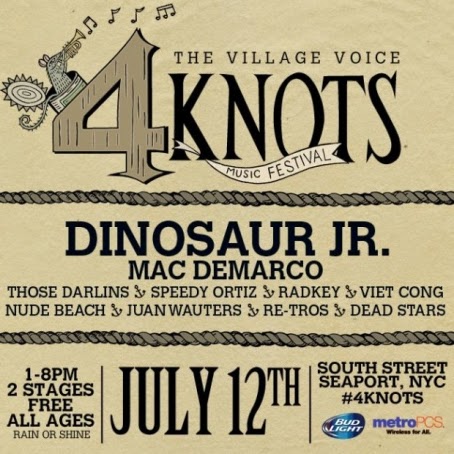 An eclectic assemblage of artists is scheduled to appear this year, running the gamut from legendary status, those solidly established over the last year all the way through to fresh and emerging acts. 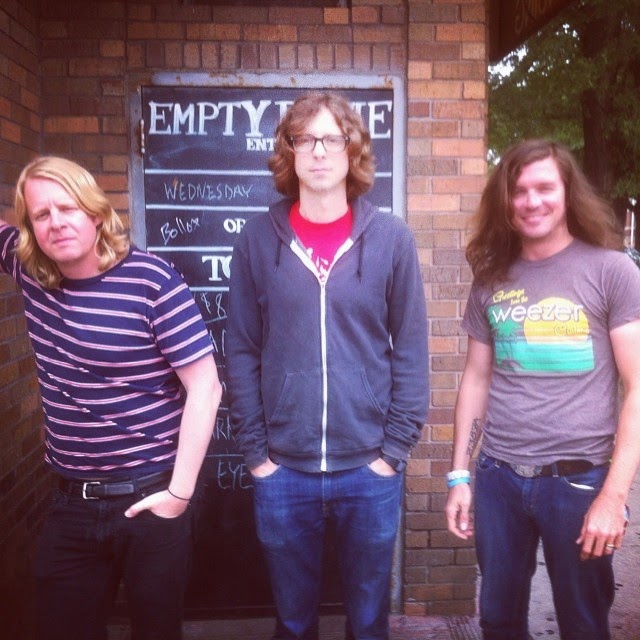 One noteworthy band on the rise who has recently released their first full length album titled “Slumber” is Brooklyn’s Dead Stars. Currently embarked on an east coast and midwestern tour, the band will wrap that up with a homecoming appearance at this event. The new collection of songs takes what was already appealing about this band and multiplies it exponentially. Opening track “Someone Else” grabs hold with the chorus hook a mere 50 seconds in, and memories of every uptempo, Americana band you ever loved runs wildly through your head. The timely “Summer Bummer” leans heavily on the solid backbeat dropped down by master sticksman Jaye Moore. Cousin Jeff’s playful lyrics echo Joey Ramone’s casual nonchalance towards negativity, while John’s bass lands squarely on Lou Barlow’s groove.


Another up and comer performing who proudly represents the borough of Queens is Juan Wauters. Though he claims his songs represent an evolving search for that specific sound which will never come to be, the 60’s era folk groove of his first 7” single “Sanity” belie such nihilism. While the track's lyrical subject matter may explore darker corners of human psyche, its rhythmic groove evokes original British invasion folk-poppers like Peter and Gordon. The vocal delivery and overall vibe conjures up images of Austin Powers leading a line dance down Carnaby Street. 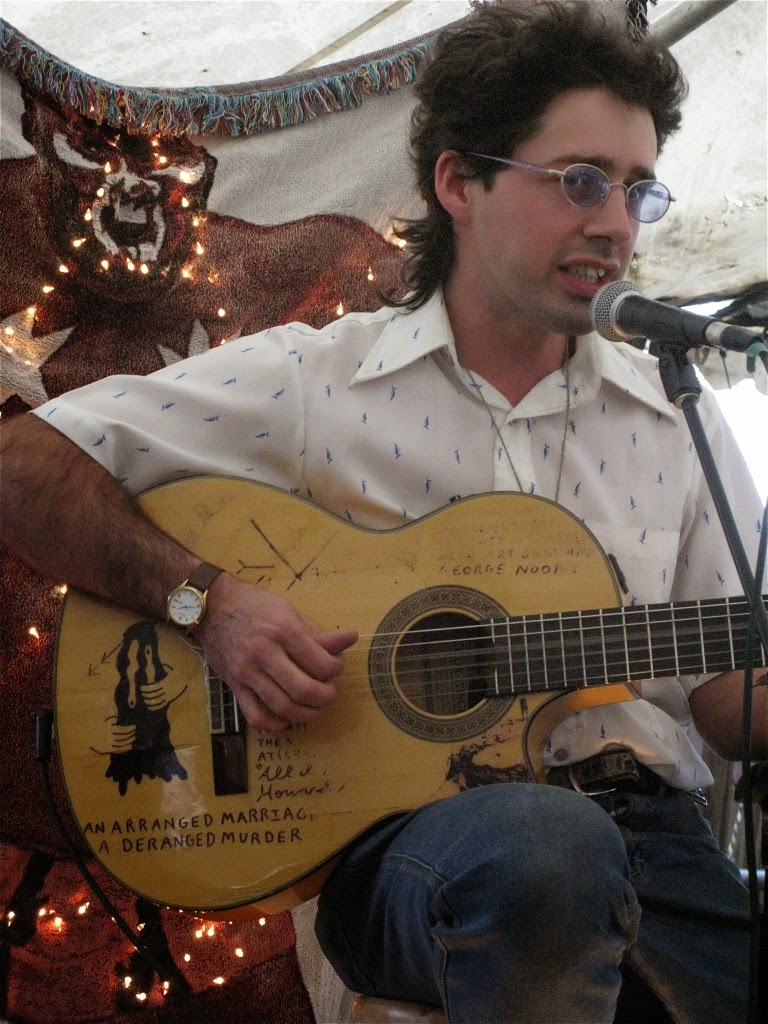 This year’s big name headliner is 90’s legends Dinosaur Jr, who reunited a few years ago and have consistently put out new material ever since, and are clearly one of the most influential band in Brooklyn's current 90's rock revival. Other acts scheduled to perform are Mac DeMarco, Those Darlins, Speedy Ortiz, Radkey, Viet Cong, Nude Beach and Re-TROS.

4Knots Preview on The Deli by Dave Cromwell

Brooklyn psych-rockers Baked present their official lead single “Don’t Trip” as a teaser for the full-length album “Debt,” scheduled for an August release. 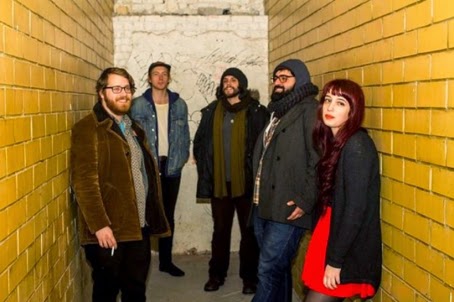 The track emerges via a slow, languid pace, as casual pitch-bended guitar chords meander over loose, live-sounding drums. Boy/girl tandem vocals tell a tale of how “It’s a second coming Christ, and the kids they are screaming.” A well placed minor chord throughout the verse cycle holds the listeners interest by avoiding predicable sonic patterns. The whole thing is capped off with nearly a minute of extended coda early 70’s Pink Floyd guitar textures.

Imagine Dean Wareham and Galaxie 500 having a taco with Stephen Malkmus and The Jicks on a sun-drenched afternoon. If you’d like to get further “baked,” head over to their Bandcamp and pre-order the album. 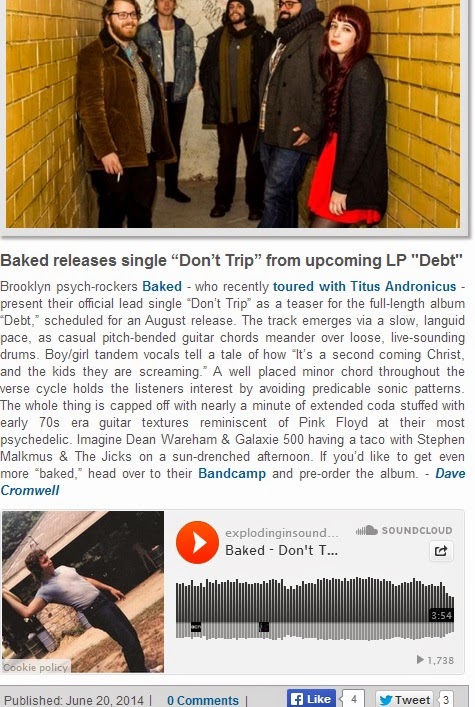 Baked on The Deli by Dave Cromwell

With the release of her latest full-length album “Blood Ballet,” singer/songwriter Maggie Rogers crafts an impeccable collection of folk songs that convey an elementary charm. 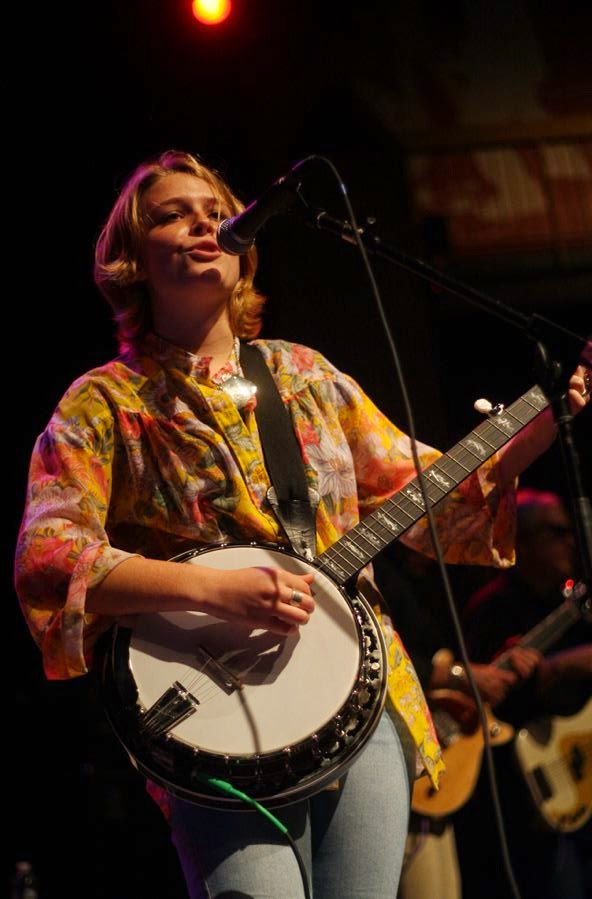 Her voice is seductive, drawing the listener into a world of lyrical imagery with a clear gentle delivery. Additional songs (which can be heard Here) “James” takes the storytelling further with a three-quarter time waltz progression and heartfelt sentiment. “Drift” adds synth strings and soft percussion to the mix, underscoring strong-yet-tender vocals. Contemporary artists like The Pierces, Wilsen and Courtney Barnett all come to mind as kindred souls. 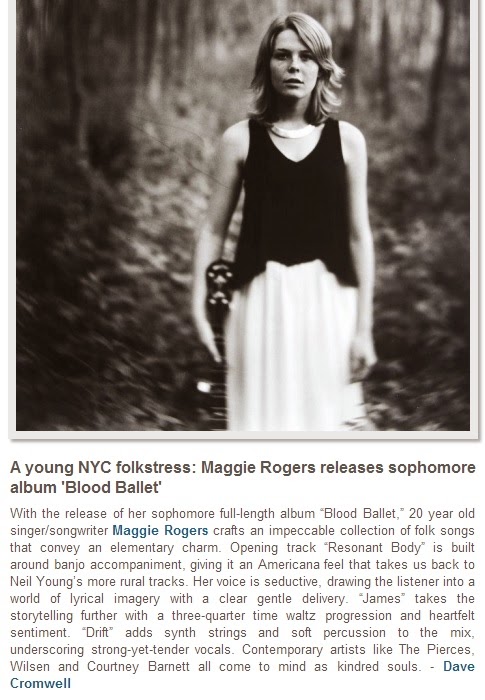 Maggie Rogers on The Deli by Dave Cromwell 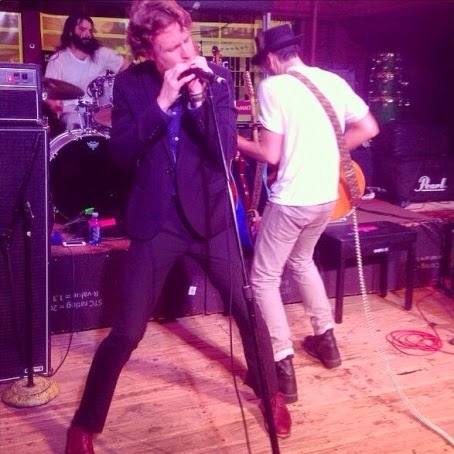 
2014’s “Magic Boy” showed the band dialing down its frantic pace on the slow burn intensity of “Running Dry.” While that track emphasizes a bluesman’s harrowing wail, “17 Letters” finds the band streamlining their sound into a pop-friendly two and a half minutes. “Never Can Tell” smolders with a “Voodoo Child” vibe, while "Outta My Mind" bursts out on a harmonica enhanced rave up over a rabid psychotic beat. 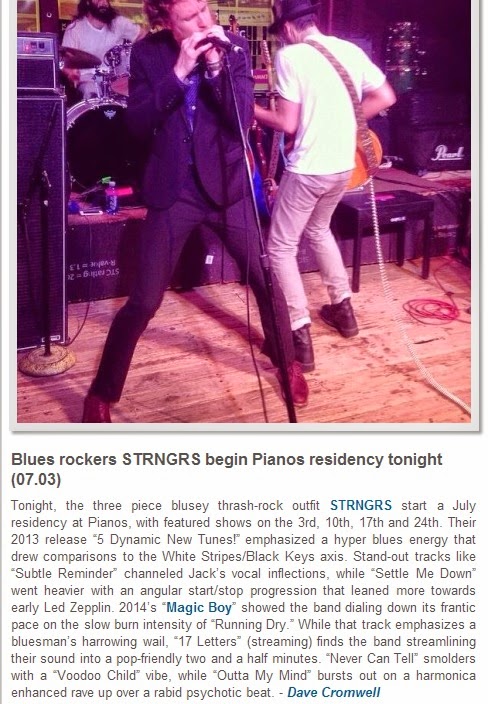 STRNGRS on The Deli by Dave Cromwell

Also out this month is the 10th Anniversary Issue of The Deli Magazine, Issue No. 39. 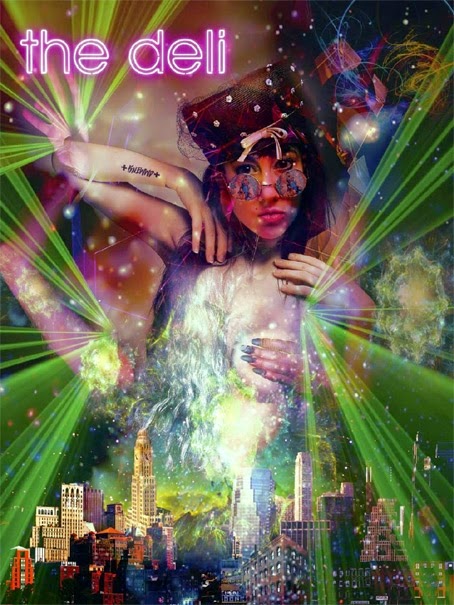 Which can be viewed and acquired in various formats Here

In that issue I analyze how the band Animal Collective influenced the Brooklyn music scene. 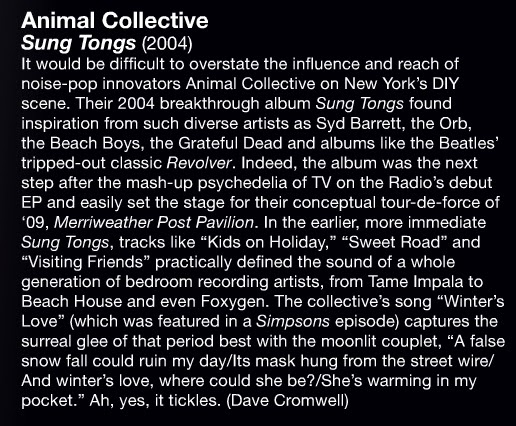 It would be difficult to overstate the influence and reach of freak folk innovators Animal Collective on the DIY recording scene. Their 2004 breakthrough album “Sung Tongs” displayed a level of creativity and imagination previously unexplored by their contemporary generation of bedroom recording artists. 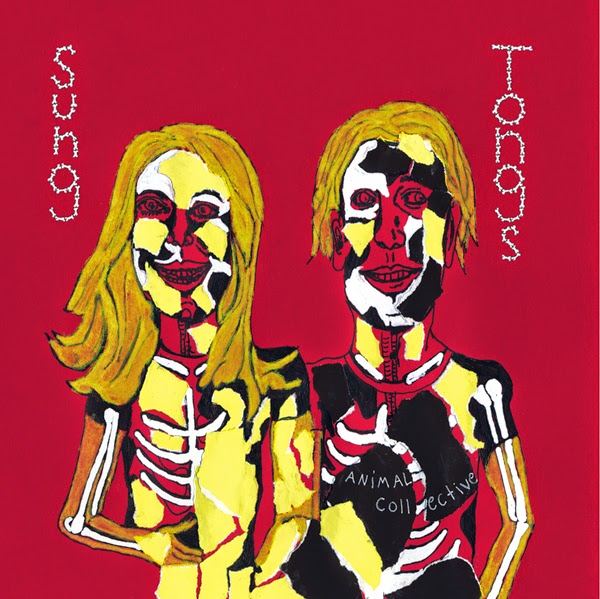 Finding their own inspiration from diverse yet psych-centric artists like Syd Barrett’s Pink Floyd, The Orb, Grateful Dead and albums like The Beatles tripped-out classic “Revolver,” the collective served as a model for others to follow. You can hear in the vocal machinations of songs like “Kids On Holiday,” “Sweet Road” and “Visiting Friends” how current artists like Tame Impala, Beach House and even Foxygen have run with that audio palette. Their song "Winters Love" (which was featured in a Simpsons episode) captures the spirit of that time best with the lyrics “a false snow fall could ruin my day, its mask hung from the street wire - and winters love, where could she be? She's warming in my pocket.”
Posted by DaveCromwell at 1:00 PM

I especially like the piece on the Haunted Hearts. As a big fan of classic glam rock, they sound especially intriguing.

Yeah, Brandon laughed when I wrote "Glam Trash For No Cash - it's all the sensation!"

love Maggie Rogers and Dead Stars! the songs from those two stood out for me the most. I remember Dead Stars from a previous blog (and liked them right away) but Maggie is new to me and I am now totally in to her sound!

For sure Maggie is a wonderful recent discovery, Misty. And like you say, Dead Stars has been featured here before - but with the release of this full-length album (and the subsequent big 4Knots appearance) their star is shining brighter than ever.

Crocodiles have put out some really good albums so I am glad to be reading about Haunted Hearts here. I definitely need to hear more. Baked was cool too.

I know you are a fan of Brandon's work with Crocodiles, Midnite Rambler. So, I'm glad I could tip you his work with Haunted Hearts too. Also pleased to hear you enjoyed the music that Baked presents. I definitely grabbed onto that sound, the moment I heard it.

Somebody tell him I said that, Jeff!

He read it. He wants us to call him that now.

And rightly you should!
(both of you Jeff's)

I've started to get into that STRNGERS and Animal Collective stuff now too.

Definitely worth your listening time, Misty.

Big fan of the Crocs and Dee Dee as you know and have been enjoying the Haunted Hearts album. They are both prolific songwriters !

Truly, AVP. It takes a special ability to compose new songs that aren't simply a repeat of what has previously been done. These two most certainly have the gift to do that.

While listening to Maggie sing, I kept hearing Cat Pierce vocal phrasing in places, Will. Both in tone and inflection. So, I knew you would like her sound. Ah, that's good news about The Pierces new album. Something else to look forward to.

My pleasure, Maggie. Looking forward to catching one of your live shows sometime.

Thanks, boys! Glad to know you liked what I wrote about you.

Well, I am a sucker for a "A well placed minor chord" BAKED.