The Deli Magazine has now published its Spring 2014 Print Issue (No. 38), which includes an in-depth feature interview, as well as other significant reviews written by yours truly. Additional noteworthy writing published on the Deli Mag site included here as well. 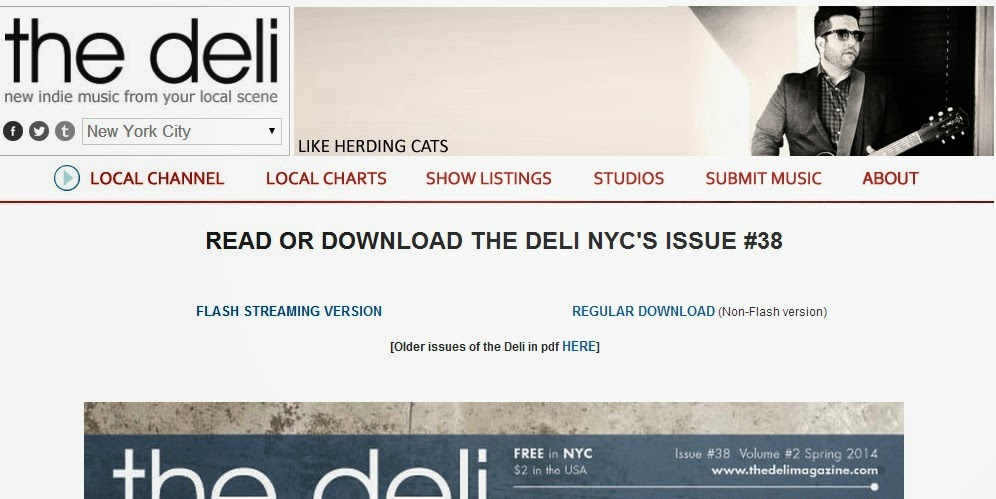 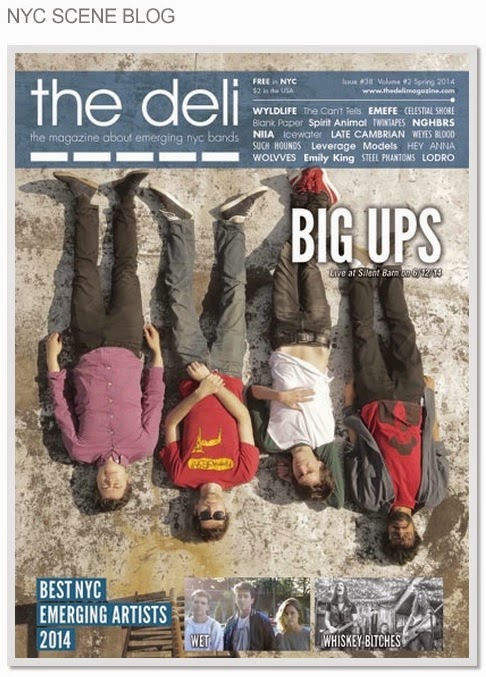 Since forming at the beginning of 2013, Bushwick Brooklyn-based Whiskey Bitches have released a mini 2 track EP titled “Wasted” and played numerous local area shows. While their music has a distinct punk rock element to it, a closer listen reveals more than the simple song structures that genre usually provides. There is a noticeable amount of strong rhythmic punctuation and angular changes throughout those two tracks, as well as additional songs heard in the live environment. The two initial tracks were recorded under the guidance of much heralded studio wizard Jeff Berner. Founding members Madge and Kate Black have solidified their current lineup with Eli Lopez on drums, and plan to release new material in the coming months. 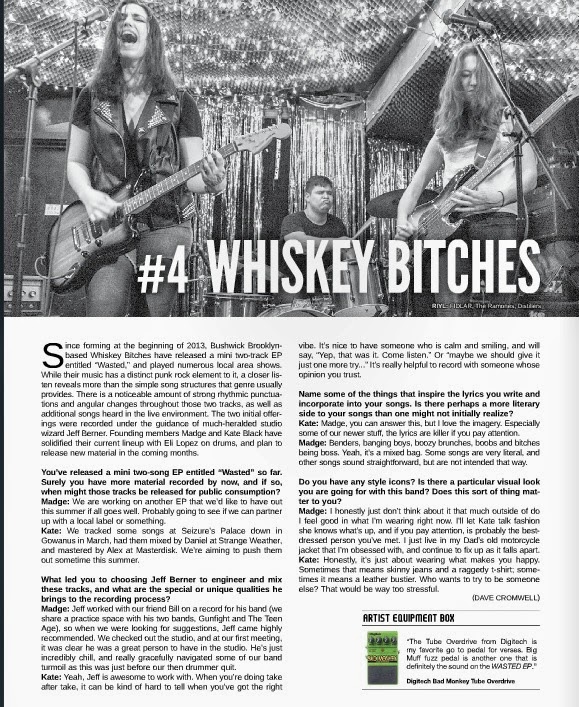 The band states that the coolest random press they got was when a Scottish podcast aired them after their Deli poll win. 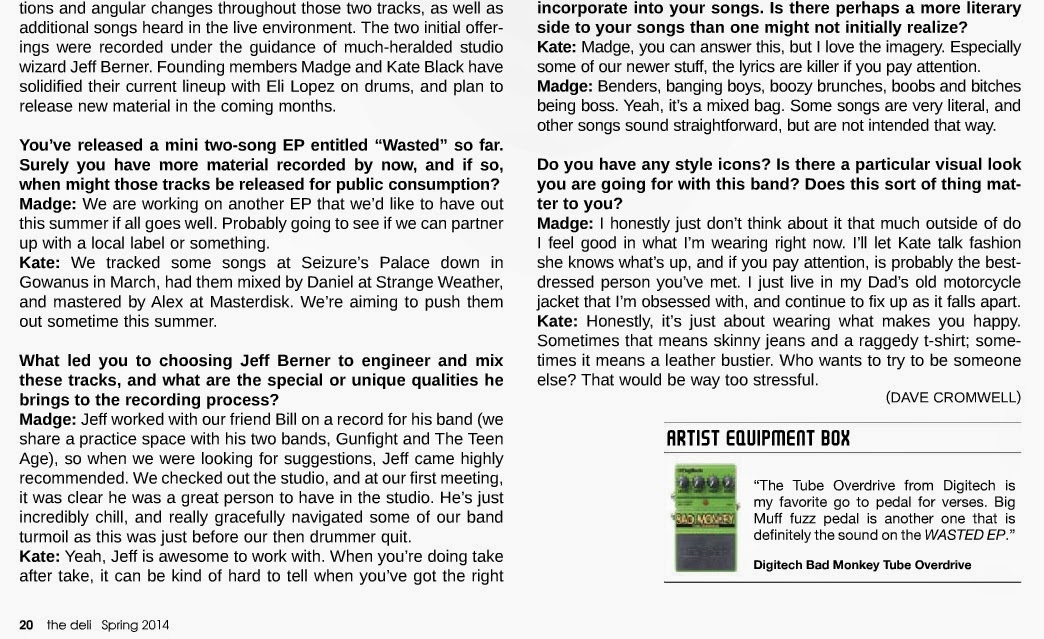 and a blog about it Here 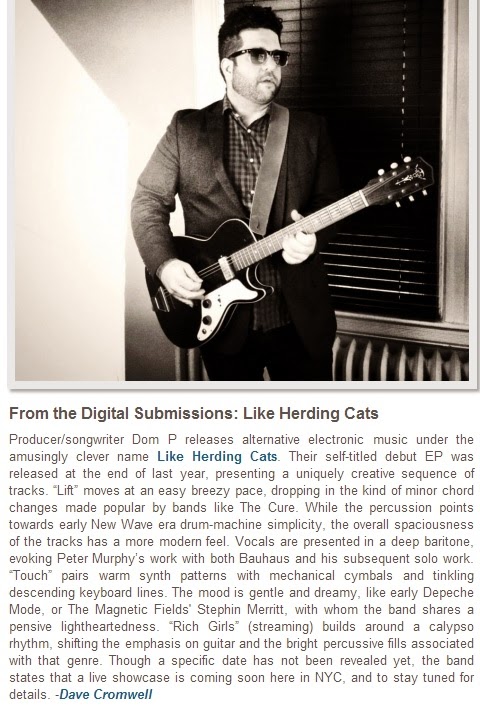 An alternative electronic project created by producer/songwriter Dom P releases music under the amusingly clever name Like Herding Cats. Their self-titled debut EP was released at the end of last year, presenting a uniquely creative sequence of tracks. “Lift” moves at an easy breezy pace, dropping in the kind of minor chord changes popularized by bands like The Cure. While the percussion points towards early New Wave era drum-machine simplicity, the overall spaciousness to the track makes it work to their advantage. Vocals are presented in a deep baritone, evoking Peter Murphy’s work with both Bauhaus and his subsequent solo work. “Touch” pairs warm synth patterns with mechanical cymbals and tinkling descending keyboard lines. The mood is gentle and dreamy, like early Depeche Mode, or even Martin Gore’s solo work. “Rich Girls” builds around a calypso rhythm, putting emphasis on guitar and bright percussive fills most associated with that genre of music. Though a specific date has not been revealed yet, the band states that a live showcase is coming soon here in NYC, and to stay tuned for details

Like Herding Cats on The Deli Mag by Dave Cromwell 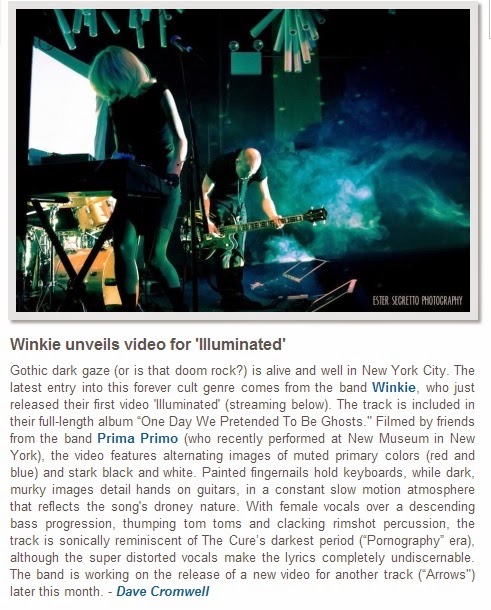 Gothic doom rock is alive and well in New York City. The latest entry into this forever popular genre comes from the band Winkie, who have just released their first video (“Illuminated”). The track is off of their full-length album “One Day We Pretended To Be Ghosts." Filmed by friends of theirs from the band Prima Primo (who recently performed at New Museum in New York), the video features alternating images of muted primary colors (red and blue) to stark black and white. Painted fingernails hold keyboards, while dark, murky images detail hands on guitars. The song itself features female vocals over a descending bass progression with thumping tom toms and clacking rimshot percussion. Sonically reminiscent of The Cure’s darkest period (the “Pornography” era), understanding the lyrics appear less important. This particular track is more about texture and mood. There are plans to release a video for another track (“Arrows") later this month.

Winkie on The Deli Mag by Dave Cromwell 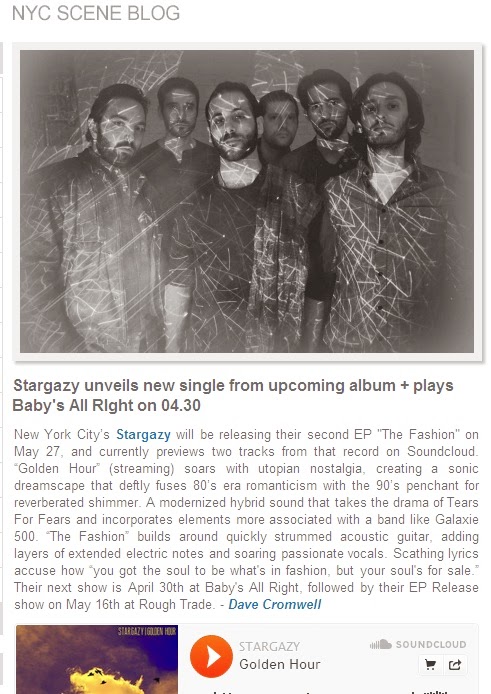 New York City’s Stargazy have released their second EP "The Fashion" on May 27, and currently preview two tracks from that record on Soundcloud. “Golden Hour” soars with utopian nostalgia, creating a sonic dreamscape that deftly fuses 80’s era romanticism with the 90’s penchant for reverberated shimmer. A modernized hybrid sound that takes the drama of Tears For Fears and incorporates elements more associated with a band like Galaxie 500. “The Fashion” builds around quickly strummed acoustic guitar, adding layers of extended electric notes and soaring passionate vocals. Scathing lyrics accuse how “you got the soul to be what's in fashion, but your soul's for sale.” Their recent shows at Baby's All Right and Rough Trade Nyc continue to draw attention to their unique sound.

Stargazy on The Deli Mag by Dave Cromwell


Also featured in the Deli Spring Issue No. 38 Print Issue 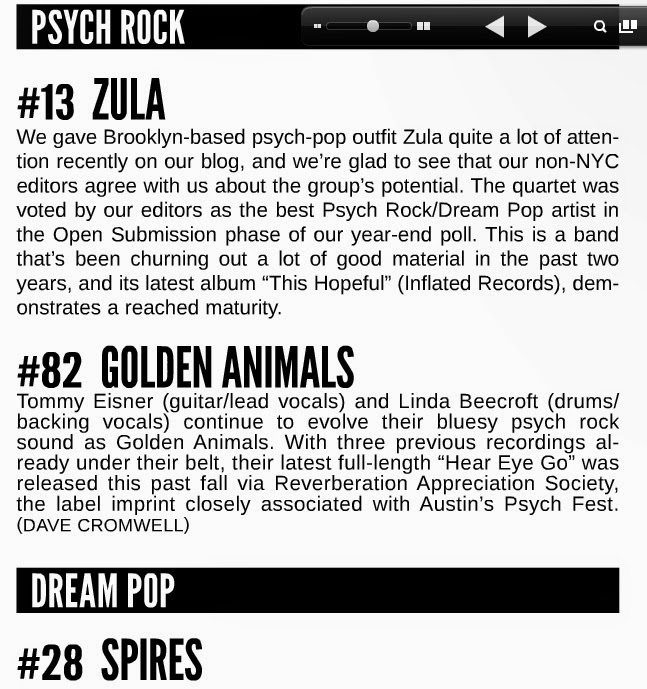 Golden Animals on The Deli Mag by Dave Cromwell

Life Size Maps on The Deli Mag by Dave Cromwell

whiskey bitches are the best kind! wonderful writing as always croms- a veritable deli of delights ;)

Ah, so cool of you to say, William. Yes, the Whiskey Bitches come across as a most likeable bunch!

Yeah! The Deli Magazine is out! featuring Whiskey Bitches! Big shout out to Dave Cromwell for the write up! See page 20!!

My pleasure, Emily! Thanks for giving such a quality interview. It certainly does look rather good there in the Print Issue.

I'm really enjoying both Like Herding Cats and Winkie on this one!

I have to say Misty that those two artists are some of my favorite new music out there right now.

Both The Deli Magazine and I thank you for checking them out, Anouk.

This Same House is up on The Deli (Thanks DaveCromwellWrites)

I'm pleased to know that quote resonated with you. It's a quality song.

@DaveCromwell @TheDeliMagazine thanks Dave. Really loved your review. It was one of my favorites. Thanks!

You are quite welcome! And congrats to you for winning the Deli Artist of the Month.

I love that track, Winkie. The dark, unsettling Pornography-era of The Cure has always been some of my favorite music. You've really captured that essence there.

@DaveCromwell Thank you so much for writing about the new WINKIE video for Illuminated. It was a great review, we appreciate it.
PRIMA PRIMO

I love your work the video PP.

whiskey, bitches and gothic rock - that's how i spend my life. :)

The comparison between Winkie and The Cure's "Pornography" caught my attention immediately. "Pornography" is an excellent album though it is a really intense, drugged-out freakout so one has to be in the mood for it. I highly recommend it to anyone with an interest in The Cure. The drums on "Illuminated" by Winkie really does sound just like The Cure at that time around 1982 & the guitar is really great too. I'd like to hear more by them.

I completely agree with you Rambler - that I'd love to hear more Winkie as well. You have a great ear for this era of music. Yeah, the "Pornography" album was The Cure's darkest for sure. Heroin struggles are depicted there. But also - *amazing* tripped out songs like "A Strange Day" too. I've read a number of attempted explanations of that songs meaning. Everything from an acid trip experience to an account of the last day of the world. Chilling stuff, really. And of course, such great music.

Thanks for checking it all out, Ivanka.

Best named group of the bunch is Life Size Maps, imo. Otherwise, it sounds like there's a lot of corralling of inebriated pets.

SwagBucks is a very popular work from home website.